A 1939 satire critiques shtetl life — before it disappeared forever 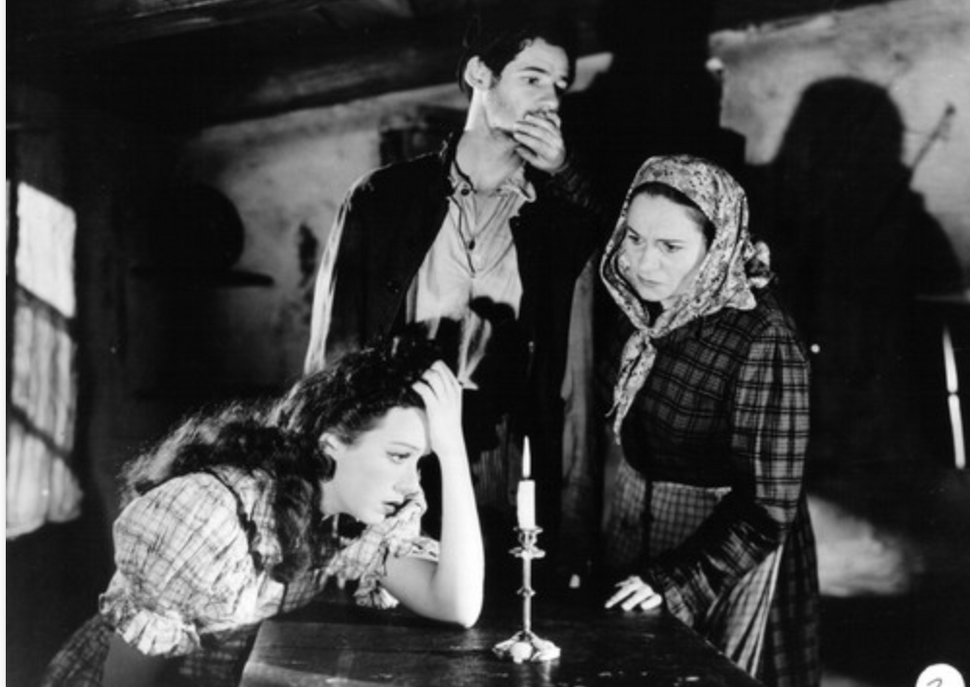 A scene from Edward G. Ulmer’s “The Light Ahead.” Courtesy of (C) The National Center for Jewish Film

Depictions of shtetl life — with their pogroms, close knit community and at times provincial ways — invite nostalgia and criticism all at once.

Many of the shtetls’ most famous chroniclers in fiction were also moralists of the old world, critiquing the pieties and superstitions of the Pale of Settlement, often from the safe distance of an urban center. But while they didn’t miss the poverty or the at times parochial thinking of these places, the work was never without sentiment or a need to speak more of the past. Artists safely landed in Di Goldene Medine were spinning yarns about the Old Country, even on the eve of its final disruption.

1939’s “The Light Ahead,” now playing in a new restoration as part of the New York Jewish Film Festival, is emblematic of these mixed feelings, resulting in a more unwelcome clash in tone, straddling sharp satire and indulgent character sketches that blunt its larger points.

At the same time as the film sends up the clannish community of the shtetl, it reveals a new subculture of players clamoring for equal time. With a huge cast pulled from the ARTEF and Yiddish Art theaters in New York, the film often feels like a repertory showcase, spinning off to vignettes and subplots that highlight talent but don’t do much to advance the plot. That said, the plot is pretty simple.

Fishke, a lame orphaned bath attendant played by David Opatoshu, is in love with Hodel, a blind, beautiful orphan chicken plucker endearingly rendered by Helen Beverley. However, the two have no prospects, are susceptible to meddling rumors and, the film suggests at every opportunity, are ripe to move to greener pastures than the cholera-infested streets of their Odessa backwater, Glubsk.

It has the obvious makings of melodrama, and with a score of keening violins and dimly-lit exteriors, doesn’t entirely avoid it. Saving it from mere treacle are character actors.

Isidore Cashier as Mendele the bookseller (a clear avatar for Mendele Mocher S’forim, who wrote the stories on which the film is based) delivers an overwrought monologue to an uncaring God, indifferent to shtetl dwellers’ suffering: “You hear the groans and persecutions and massacres,” Mendele says, “And you keep silent.” But, in lighter moments, he also censures his fellows for overusing the popular interjection “eh.”

Enumerating the long history of Jewish adversity, Mendele veers into purposeful caricature, while two yeshiva buchers have a banal conversation in the form of a nigun. (One laments, in Wimpy of “Thimble Theater” terms, having only six days in his week — i.e. no one to provide him with free lunch on Thursdays.)

While the main couple are charming, and director Edgar G. Ulmer, a prolific director of horror who is quite timely in these days of plague, seems spread too thin to do their story justice while juggling these ancillary characters and a larger societal story.

In the last act, a group of working-class Jews confronts the religious authorities controlling the city’s purse strings, indicting them for living well and appropriating funds for a new kosher butcher or roof for the shul while the shtetl lacks a hospital.

The scene is an interesting, but abrupt, development that doesn’t land the satirical punch it’s meant to. Yet this thread, like the many others that don’t quite connect, hint at something bigger — and not yet lost to memory at the time the film was made. The film is valuable as a portrait of a world that was fading, a patchwork of personalities and antiquated professions and values soon to be obliterated by modernity and war.

Yet the film resolves with a loophole in its quandary between the “enlightened” world and the shtetl. Hodel and Fishke agree to wed in a cemetery to rid the village of cholera — yeah, we used to do that — but manage to escape afterwards. Their choice, to find a happy medium, is the choice of the film itself, paying homage to where they came from while leaving it safely in the past.

“Your Hodel is right to leave such a city which still lives in the Middle Ages and fight cholera with superstition,” Mendele tells Fishke, as they make their way beyond Glubsk. Yet we sense that Mendele will return, it being too late for him to strike out on his own. Despite his words, the film appears to see some merit in that choice.

Years later, the movie makes for confusing viewing. But then, 1939 was a confusing year for world Jewry. Some scholars read the plague in this film as a metaphor for Nazism, an interpretation that, given that plot point’s late and underdeveloped introduction amid a sea of skits, I view as a stretch at best, a botched metaphor at worst. But in hindsight the film does have the potential to haunt. Soon after its debut Yiddish cinema would fade from view, along with the last remnants of Eastern Europe’s shtetls.

In that way, “The Light Ahead,” with its over-packed cast of fondly rendered characters, but critical view of the Old Country is of its moment. That alone makes it worth watching.

A 1939 satire critiques shtetl life — before it disappeared forever