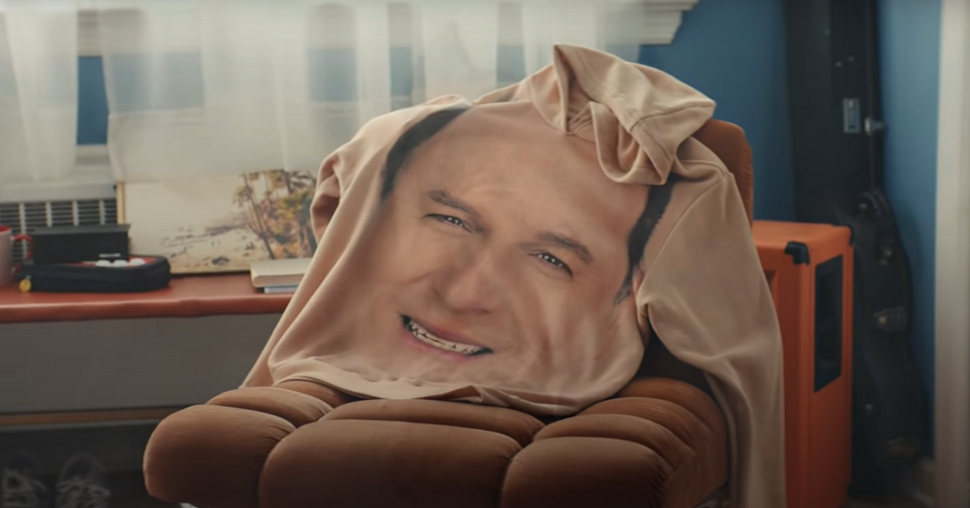 Super Bowl LIV was a disappointing spectacle for even the most devoted Tampa Bay Buccaneers fan: a rout never makes for interesting viewing.

And while we congratulate the Glazer family on a victory handily won — while cringing a bit each time the commentators said it was a “great night for [Buccaneers coach Bill] Arians” — this year, the commercials were pretty good. Especially if you had an eye out for landsmen. Here’s a rundown of the Jewish cameos you may have missed.

Does this sweatshirt suffer from shrinkage?

The best ad of the night goes to this Tide detergent commercial, in which an adolescent boy insists to his mother that his well-loved Jason Alexander hoodie is plenty clean. Cut to a gauntlet of abuse for the hoodie set to the theme to “The Greatest American Hero” (aka George Costanza’s answering machine away message). For those doubting the “Seinfeld” veteran’s range, behold his litany of expressions he makes on said clothing item as he serves as a de facto home plate, gets a faceful of desk gum and suffers the wearer’s impromptu worm dance in someone’s basement. Top marks, Tide, though while Alexander may object to garbage lettuce in his mouth, we all know George has no compunctions about eating from the trash.

A Kansas City super-fan had his day; a Raptors ambassador fills in for a legendary pitchman

In a State Farm spot, we learn that Kansas boy-made-good Paul Rudd is the stand-in for none other than Chiefs quarterback Patrick Mahomes. (He’s no replacement on the field, as we can see by his unforced fumble.) Later, we learn that Drake is Jake from State Farm’s stand-in and the former apparently has no issue pulling rank on him.

Multihyphenate star Daveed Diggs gave Big Bird a crash course in DoorDash’s delivery options in the neighborhood. There was some soft shoe, empanadas and a hint that Cookie Monster is a fan of the Instagram-able desserts. The block appears to have gotten more eclectic with its offerings since the days of Mr. Hooper’s store, a sad sign that gentrification has found Sesame Street. All the more reason to frequent the Mom and Pop shops featured in the commercial.

Since the radio silence on Justin Guarini’s execrable Dr Pepper mascot Lil Sweet, I believed the days of the diminutive cowperson on a tiny horse were past us. Enter the four teeny Maya Rudolphs of the Apocalypse who, unbidden, trot into an outpost town in an ad for Klarna, a Swedish bank. Apparently Klarna lets you make four small payments on a purchase: Hence the clattering of hoofs and singing of Nancy Sinatra and cashing out by the quarter-sized cowgirls buying a pair of boots. (I believe this ad played in the fourth quarter.) Strangely, rather than locking doors, shuttering windows and lying low until the Rudolph quartet’s wrath had passed, the townsfolk who witnessed the ride of the Four Mayas were into it. More power to them, I guess.

Chalamet gives us a sharp parody of a classic

With razor sharp features and forever sallow features, Timothée Chalamet was born to play Edward Scissorhands’ son. Well, it’s unclear if that’s what’s really going on in this car ad. Supporting this supposition: Winona Ryder plays his mom and it’s clearly paying homage to Tim Burton’s 1990 classic. Contra that: we know that Edward and Ryder’s character don’t end up together and it’s never made clear if they can conceive a child, given that Edward was artificial. And even if they could, his scissorhands — a stopgap for normal human hands that broke when Vincent Price had a heart attack — are probably not in any way hereditary. But, perhaps I’m thinking too much about this charming commercial for hands-free steering.

A shande or just a sandwich spread?

Amy Schumer played something called a Fairy Godmayo. She helped materialize deviled eggs. As Jews, we don’t know how to feel about this but aren’t exactly shepping naches. We understand that Gold’s Mustard may not have the same ad buying power as Hellmann’s (NB the extra “N”), but it’s something of a painful display. As Milton Berle, one of Schumer’s comedic predecessors, famously opined, “Anytime somebody orders a corned beef sandwich on white bread with mayonnaise, somewhere in the world, a Jew dies.” Mercifully, it appears that no Jews were harmed in the making of this ad.