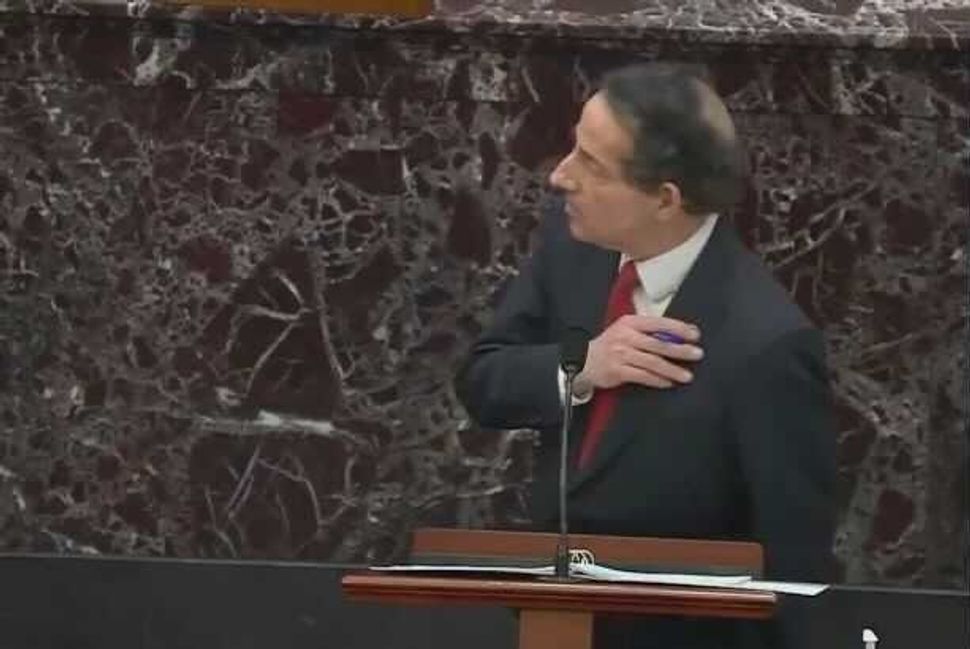 During Tuesday’s impeachment trial, our Slack channels exploded. First, of course, it was David Schoen, Trump’s lawyer, covering his head with each sip of water he took. Was it a reflex? An Orthodox Jew trying to hold onto a phantom kippah? Or was it an attempt to cover his head, in lieu of a yarmulke?

Then, Rep. Jamie Raskin, leading the House Managers arguing to impeach Trump, returned to the podium for his closing remarks. “Is Raskin wearing a kippah?!” we asked. “He doesn’t usually do that, does he?” 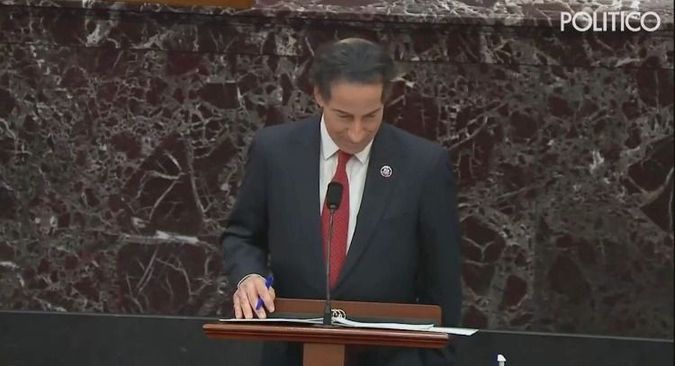 Wait, what’s that? Enhance the image! Courtesy of Politico

As it turned out, Raskin was not wearing a skullcap; he is just balding, with that particular kind of male-pattern baldness that leaves the appearance of a full head of hair from the front, but a surprisingly shiny pate from the back. As he turned his head slightly to gesticulate, the edge of his bald spot looked like a kippah.

This mistake reminded me of a game played widely in my Jewish circle when I was in graduate school and living in Somerville, Massachusetts. There is a sizable observant community there, but while it is close-knit, there is a constantly rotating cast of characters due to the stream of graduate students passing through Boston’s many universities at any given time. This means there’s always space for a rousing round of “Jewish or just bald?” (There are also variations, such as “frum or bald?”)

Especially among the younger community of 20- and 30-somethings living in the scholarly climes of Cambridge, it was a fine line — when moving about largely secular spaces, whether that be campus or the climbing gym, the game could so easily go either way. Sometimes, it seems unlikely that a younger guy is bald enough to have a kippah-sized patch, so it must be a yarmulke, we’d think. But a bald pate was more common than you’d expect, at least among Harvard and MIT’s doctoral candidates. Plus male-pattern baldness seems to come on young among those with Jewish genes, so bald and Jewish is always an option.

My friends would watch from afar, trying to guess if a certain individual was a newcomer to the community, someone we’d see at synagogue that weekend or should be inviting to Shabbat dinner. And, of course, if he was cute, new blood for the small community, the gossip would begin to flow — only for him to get close enough for us to see the light shine on a bare skull. Tricked again.

But Tuesday, all of Twitter — primed with newfound expertise in headcoverings gained a mere hour before — joined, unknowingly in our game. And they discovered, just like we did, that it’s actually pretty challenging to discern between Jewish and bald. Especially when, like Raskin, they’re both. In any case, he’s married.

Mira Fox is a fellow at the Forward. Contact her at fox@forward.com or find her on Twitter @miraefox.