In a virtual Purim spiel, a Yiddish revival and a surprising antidote to Zoom culture 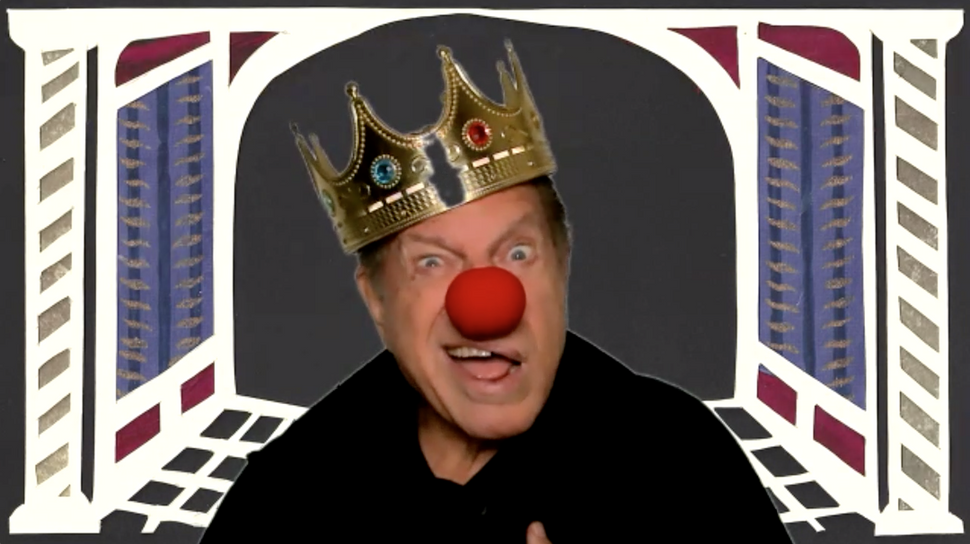 One year after the onset of the pandemic, most American theaters are languishing in the dark. But performers are still competing for our eyeballs through ever-more-sophisticated slates of virtual entertainment. Polished, highly-produced events in the vein of “Saturday Night Seder” have attempted to reproduce the intimacy and immediacy of live theater, lulling us via special effects into believing that we’ve emerged from our crumb-speckled couches into the darkened auditoriums of yore.

If you’re hankering after the same as the second pandemic-era Purim approaches, you should check out this very funky, very virtual version of the story we all think we know.

“Megillah Cycle,” which premiered last week on YouTube, represents a new frontier for a text with a storied non-virtual history. The play is adapted from the work of Itzik Manger, a poet born at the turn of the 20th century in Czernowitz (now located in Ukraine, then a part of Austria-Hungary). A precocious talent interested in folk tales and oral literature, Manger made a name for himself in prewar Yiddish literary circles. While living in Warsaw in 1936, he published his “Megile Lider,” a poem cycle that transposed the Purim story from ancient Persia to something like an Eastern European shtetl.

Manger took an irreverent view of the Megillah’s heroes: Mordechai, often portrayed as a wise sage, appears in the “Megile Lider” as a drunken trickster who meets with Satan to further his agenda. He also embellishes freely. To become queen, Esther must give up her commoner lover, the tailor Fastrigose, who later tries to assassinate Ahasuerus out of despair and fury. Meanwhile Vashti, dispatched in the course of a few lines in the original text, gets time to speak for herself, telling us what it’s like to be unhappily married to a boorish despot. All the characters in Manger’s rendering of the Megillah are intensely self-aware, enmeshed in their quotidian concerns yet conscious that they’re participating in a fable from which others will derive morals and meaning.

In 1965, even as Hebrew firmly overtook Yiddish as Israel’s lingua franca, the “Megile Lider” enjoyed another moment in the spotlight — this time as a musical, “The Megillah of Itzik Manger.” With lyrics adapted from the original poems, the musical proved explosively popular despite its emphasis on Yiddish, then a marginalized language in Israel. In 1968 it migrated to Broadway, where Joe Darion (of “Man of La Mancha” fame) wrote quippy English narration to accompany each scene, and was revived by the National Yiddish Theater-Folksbiene in 2013.

“Megillah Cycle” builds on the musical’s legacy by returning to its roots. Mike Burstyn, the Israeli-American actor who starred in “The Megillah of Itzik Manger” and took the director’s chair for the current virtual production, ditched the song and dance — ”It would have been impossible,” he said in an interview, to stage an entire musical virtually. Instead, he combined Darion’s narration with fragments of Manger’s original poetry.

“I said, why don’t we go back to the original?” Burstyn said. “It’s so brilliant in and of itself.”

A cast of eminent Yiddish actors, including Lia Koenig (known for playing a matriarch on “Shtisel”) and the klezmer musician Daniel Kahn give life to the bustling shtetl of Manger’s imagination, while Burstyn himself plays the narrator, surfacing occasionally with anachronistic quips: Ahasuerus, in his words, awards Mordechai with the “palace soft drinks and dry goods concession.”

The staging of “Megillah Cycle” is refreshingly low-tech. Actors float across the screen in their virtual boxes, sporting largely symbolic costumes: a crown for Esther, a clown nose for Ahasuerus. Short musical motifs announce the arrival or departure of various characters from the imaginary “stage.” There’s no set or scenery save for simple paper cut-outs depicting a Megillah scroll, a shtetl street, or a set of palace gates. The production has a decidedly handmade, ‘zine-like feel that puts it in contrast to so much of the engineered, depersonalized content available to us online.

Some things, of course, just don’t translate. Purim is a holiday of shtick and spontaneity, but it’s hard for actors to land a well-timed joke when their interlocutors aren’t even in the same room. Whether the characters are professing their love or devising plots against each other, it’s impossible to escape the obvious fact of their isolation. But in this case, the limits of Zoom actually serve to highlight the many miscommunications, misrepresentations and misunderstandings that underpin the Purim story.

Even as the story rolls inexorably towards its redemptive end, that melancholy effect lingers. “Megillah Cycle” isn’t your typical Purim play, but its socially-distanced setup imbues an old text and older story with an emotional valence that will endure, even when we can return to the sunny spiels we used to enjoy.

In a virtual Purim spiel, a Yiddish revival and a surprising antidote to Zoom culture