When Keith Thomas, a clinical researcher-turned-novelist and filmmaker, was studying for his master’s degree in religious education at Hebrew Union College, he overheard an unsettling story that would remain with him for years. Two old men in an Orthodox synagogue were discussing a shomer, the ritual guard who is assigned to watch over a dead body before burial. For unknown reasons, this particular shomer had become so frightened, he fled his post.

The incident inspired Thomas’ new horror film, “The Vigil,” which follows an ex-Hasid, Yakov Ronen (Dave Davis), over the course of one terrifying night as he faces down demons, both literal and figurative, while guarding the body of a Holocaust survivor.

Thomas had long wanted to create a horror film “rooted in Jewish experience.” Researching previous purportedly Jewish horror films, he noted that many of them merely place Jewish elements like dybbuks and golems into otherwise non-Jewish contexts.

“Dybbuks are played out. They’re everywhere,” Thomas said. “I knew that when it came time to find an entity, it had to be something super Jewish and something we haven’t seen before.”

Thomas came across warnings in the Talmud and other Jewish texts about demons called mazzikim that haunt abandoned homes. While Yiddish speakers, including contemporary Hasidim, often refer jokingly to a misbehaving child as a mazzik, in Jewish demonology, the word has a more sinister meaning. In “The Vigil,” the entity takes the form of an evil spirit that feeds off of grief and survivor’s guilt. Having found the perfect demon, Thomas needed the right setting. While he always envisioned his film’s hero as an ex-Orthodox Jew, it wasn’t until his agent sent an early version of the script to horror producers J.D. Lifshitz and Raphael Margules of BoulderLight Pictures that the film’s backdrop began to crystalize. Although the duo, producers of such grizzly body-horror hits as the zombie-STD fright fest “Contracted,” are Orthodox Jews who first met in day school and don’t shoot on Shabbos, neither had made a Jewish film before. Margules, who has Hasidic relatives, felt that Boro Park would be the perfect setting.

In order to capture the neighborhood and its Jewish community, Margules turned to his cousin Adam Margules, an executive-producer of the 2017 cinema verité art-house darling “Menashe,” based on the life of Hasidic comedian Menashe Lustig.

Lustig, known primarily in the Hasidic world for his short comedic clips, plays a very different role in “The Vigil.” As Reb Shulem, a rabbi who recruits shomrim, he entices the cash-strapped Yakov to guard the body of Rubin Litvak for $400.

“(Lustig) added so much to the film,” Adam Margules said. “There just aren’t that many Hasidic actors with that kind of talent and timing.”

To make “The Vigil” more authentic, all of the dialogue is in Yiddish or in the Yiddish-inflected English of many New York Hasidic Jews. Lustig translated his portion of the script, as well as some of lead actor Dave Davis’ lines, into Yiddish. Malky Goldman, an actress and film producer who plays a small but key role in the film and grew up in a Hasidic home in Israel, worked with Davis on his Yiddish lines and introduced him to her ex-Hasidic social circle.

“I organized a party for people who had left the community,” Goldman said. “I wanted to help him get a feel for how three-dimensional people are. They’re not just ex-Hasidim but real people who happened to grow up in that community. He really got it down. He did an amazing job with it.”

“Even though it was a horror film, nothing was taken for granted,” Goldman added. “They got all the Hasidic details right, even the way Dave’s (Davis) character (Yakov) chants ‘Shma Yisroel.’”

Davis not only learned his lines in Yiddish but set out to learn more of the language in order to be able to ad-lib convincingly. He quizzed ex-Hasidim on what they would say in specific situations such as stubbing their toes.

The most striking aspect of Davis’ performance for viewers familiar with the Hasidic world and those who leave it is his spot-on reproduction of the New York Hasidic accent in English.

“I took a lot of time to work on their dialect,” Davis said. “I spent hours listening to recordings, fell asleep listening to them on loop on ITunes. I cut down interviews to a 12-minute track and played it on repeat. It helped me get into their bones, their brains and their ears.” 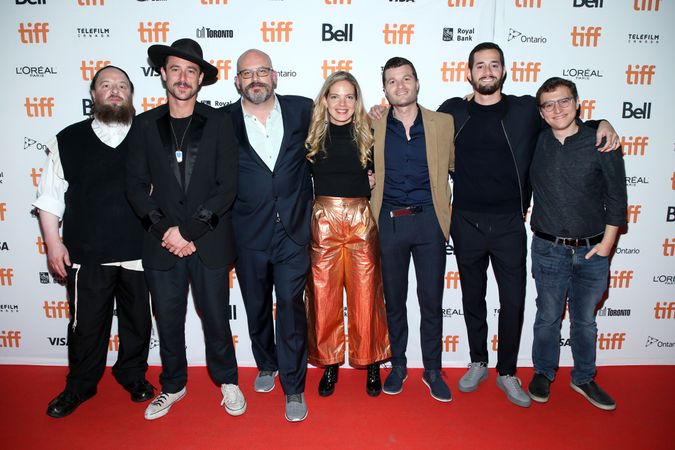 The focus on ethnographic accuracy did not come at the expense of the film’s frights, however. “The Vigil” is terrifying, and not just due to clever cinematography, the creepy house where most of the action takes place or the demon that terrorizes Davis’ Yakov. The film’s true horror lies in its portrayal of intergenerational trauma. The Hasidic communities of Boro Park were founded by Holocaust survivors and even as the last generation of survivors passes on, the genocide’s impact remains palpable.

Adam Margules, a grandson of Holocaust survivors, who has been “exposed to the horrors of the Holocaust my entire life,” said that the horror genre is perfect for capturing the Holocaust’s intergenerational effects without cheapening them.

“The demon is a lot like what survivors go through being forced to think about their experiences every day,” Margules said. “When I saw the script I felt it was something that could not only be frightful but also beautiful. It’s sad and hopeful at the same time but also really scary.”