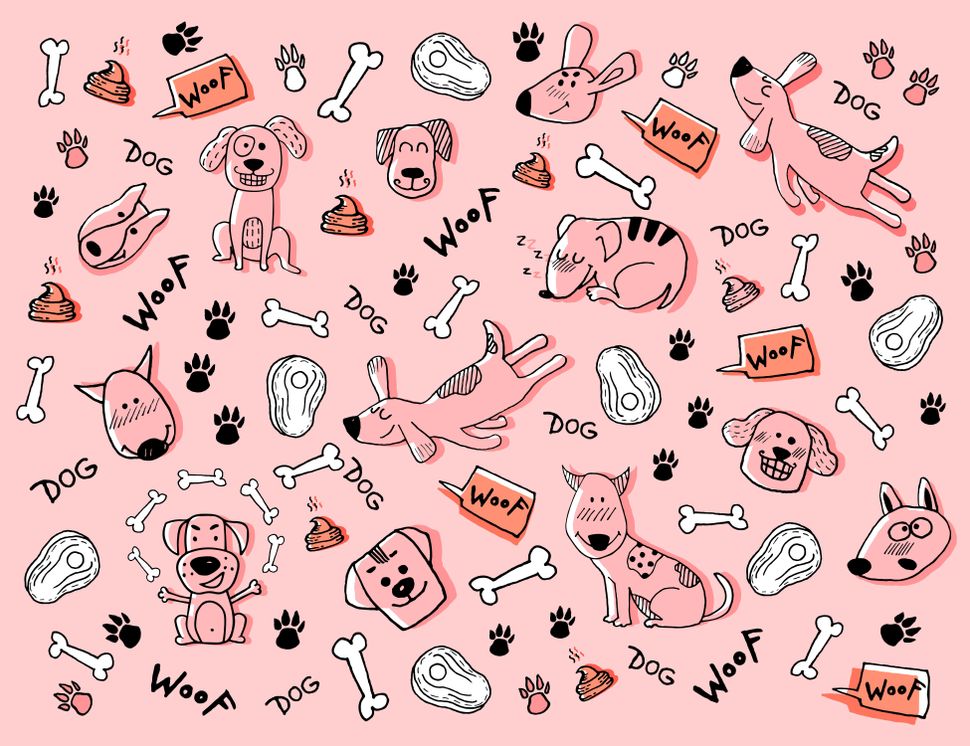 How Jewish are dogs? Illustration by Mary Naimanbayeva / iStockPhoto

It gives me no pleasure to report that Passover food gave my dog diarrhea.

And I’m not talking about food like borscht or candied fruit or, God forbid, coconut macaroons. Even humans can’t tolerate those confections. What got Tivo’s stomach all in knots was the kosher-for-Passover dog food we were feeding him.

The truth is, observant Jews don’t normally feed their dogs kosher kibble. On all other nights, Purina is just fine. But on this night, well, on this night, we need to steer clear of a few restrictions. Allow me to explain.

On Passover, Jews are technically not allowed to own chametz (leavened food) products or even benefit from them. So, while non-kosher chametz-filled dog food is perfectly fine the rest of the year, Jews who are looking to observe Passover to its fullest are left in a bind.

So where does one find such food? Is there a kosher-for-Passover aisle at Petco?

That’s where Rabbi Avrohom Blumenkrantz steps into the picture. The New York rabbi, admired for his knowledge and kindness, was a disciple of Rabbi Moshe Feinstein, the preeminent Torah scholar of the 20th century. Starting in the 1970s, Blumenkrantz began compiling a list of off-the-beaten path items that were kosher-for-Passover. It started out as a newsletter he would give to friends and congregants, and he later compiled it into a must-have book. Walk into an Orthodox household during Passover preparations, and it’s not uncommon to hear someone shout: “Hey, where’s the Blumenkrantz book? I need to look something up.”

The guide has been updated annually, with new products added each year – including which brands of dog food don’t have any chametz in them.

Spend any longer with the beloved Blumenkrantz book and you might find yourself peering through a looking glass of plague-filled proportions. In addition to pet products, the 600-page tome also includes information on toothpaste, tuna and Tums. Oh, and tin foil. Don’t forget about the tin foil.

Even though non-edible items – like cotton swabs and Crockpot liners – don’t require a kosher-for-Passover certification, some Orthodox Jews take the not “owning” any chametz to some intriguing extremes. For example, some perfumes or cosmetics may contain alcohol not approved for Passover. Other items delineated in the book include dryer sheets, floor wax and, for some reason, Mylar balloons. All dental floss is allowed, as long as it’s not flavored. Hundreds of approved medicines – from Advil to Zantac – are listed across 30 pages of fine print.

Blumenkratz even used the book to rail against the dangers of the internet. As the web became ubiquitous, pages were included listing websites that one should not visit – on Passover and, presumably, throughout the rest of the year.

Even snail mail became an issue. On page 310 of the 2007 edition, the last one I purchased, he wrote: “The glue that is in the back of stamps and envelopes should not be licked on Pesach because the glue might contain wheat starch.”

For good measure, he added: “These products are not kosher for human consumption.” Thanks, Rabbi Blumenkrantz.

The section on pet food spans four pages. The bottom line is this: Most dry dog food contains some sort of chametz – wheat, oats or grain – which makes the standard fare verboten. If a dog’s main diet is dry food, and you suddenly switch him to canned meat, well you can kind of guess what happens next.

Tivo, our sweet Chow-Retriever mix with a heart of gold, did not know how to process meals of mush. Which is why when we returned home from a friend’s Seder late one Passover night, we found liquid poop projectiles all over our just-cleaned-for-Passover house.

That did not, surprisingly, mark the end of our experiment with kosher-for-Passover dog food. We fell prey to the mindset of out-of-sight, out-of-mind. You know, the Ebbinghaus forgetting curve. And so we tried again the following year. Needless to say, we had the same results. Perhaps matzah, known for clogging up your innards, would have been a better approach.

We eventually made the decision that Tivo was not Jewish and should not have to suffer for the history of our people. His ancestors were not freed from Egypt thousands of years ago. Indeed, rabbinic literature details how the dogs in Egypt were so well-behaved on the night of Passover that their lack of barking aided the Jews’ escape.

And so we made the inevitable decision to serve him regular food. Cursed be the wicked, blessed be the home of the righteous. I can only pray that we are the latter.

As for Rabbi Blumenkrantz, he passed away in 2007 of complications from diabetes. His family still publishes the annual guide. There’s now even a Blumenkrantz app.