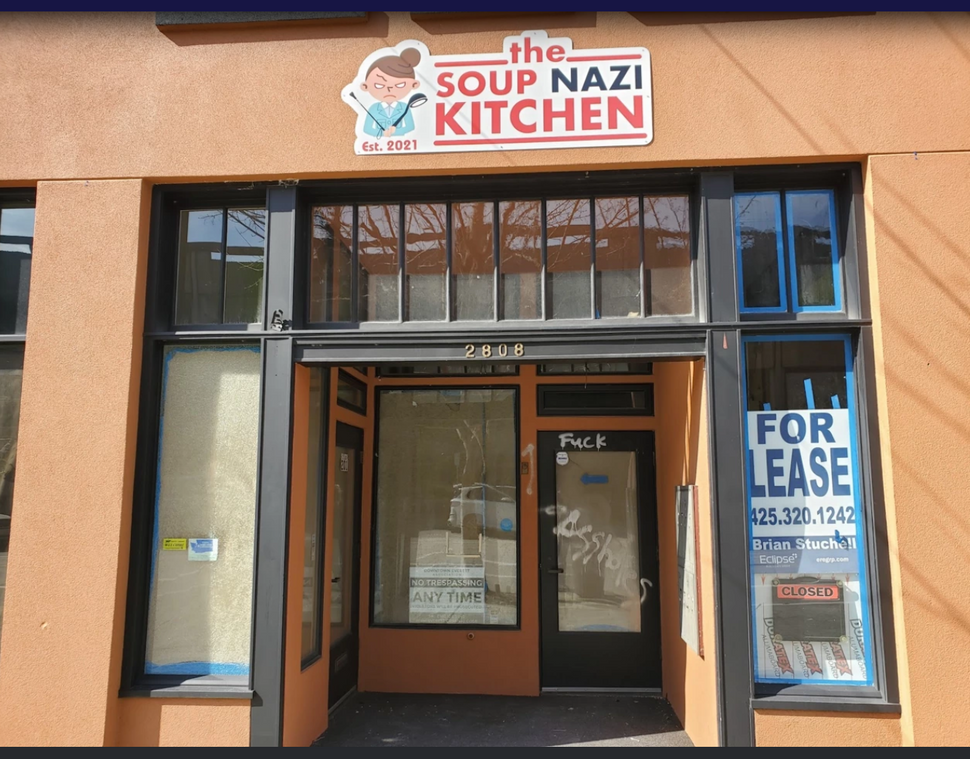 The Soup Nazi Kitchen sign — before the word “Nazi” was painted over. Photo by Imgur

For one, brief, bizarre moment a Soup Nazi restaurant was coming to Everett, Washington.

Redditters were quick to note the storefront of “The Soup Nazi Kitchen” in the downtown area, advertised with a sexualized female Nazi mascot in SS-like uniform — not the mustachioed visage of the Soup Nazi of “Seinfeld” fame or his real life inspiration, the “Soup Man” Al Yeganeh.

The soup spot, which has yet to open, was the idea of entrepreneur Andrew Ho, known for the recently-shuttered Alive Juice Bar in Seattle. A March 18 post to his Foodyap blog reveals that word “Nazi” has since been painted over on the signage after vandalism, discovered Wednesday morning, which included windows shattered by a pellet gun.

“The sign was putting neighbors in danger — there was a drive by shooting and graffiti last night — and we don’t need police officers getting hurt if a mob shows up,” Ho wrote in a FAQ post on the blog.

But wait, why did this even happen to begin with?

Ho said in an earlier blog post, the day the vandalism was discovered, that the name refers to his own, moniker “Juice Nazi,” which customers gave him for his focus on efficiency at Alive. (The juice bar had a chalkboard sign that ordered customers to not form a line and to call out their order, otherwise you’ll “stand around like an idiot.” Ho has also published books with “Juice Nazi” in the title.)

The name was also a nod to “Seinfeld” whose Soup Nazi was known for ejecting customers with the line “No soup for you!” more than for any white nationalist sympathies. (Yeganeh was born in Iran and is of Armenian origin; Larry Thomas who plays “Yev Kassem” is Jewish — the only one who could credibly called a white nationalist and was involved in “Seinfeld” is Steve Bannon.)

Ho also said that the name was picked for his nostalgia for the ‘90s “when there was nowhere this amount of censorship (Eminem, NWA, Quentin Terantino [sic]).” It’s also a reference to the fact that “this business was created in response to the lockdown and social distancing measures.”

Overall, Ho seemed to be concerned with ending what he called “tyranny” and cancel culture, and cited Bill Maher as someone who is “pushing back” on that “movement” effectively. Ho is Chinese-American and referred to the re-education camps of the Chinese Cultural Revolution as an example of a slippery slope. (Elsewhere on his blog, Ho is less than PC, using a slur for Japanese people multiple times in a post about vaccinations where he called Dr. Anthony Fauci a fraud.)

But isn’t Ho concerned about white supremacy? On the blog, Ho denied that white supremacy was on the rise, saying that it was wrongly being conflated with a rise in nationalism. He also wasn’t worried about becoming a hub for white supremacists.

But now that Ho has painted over “Nazi,” he’s weighing different names, including “Soup Lenin Kitchen” and “Soup Mao Kitchen.” Or, as an indictment of Korean xenophobia and British imperialism “Soup Korean Kitchen” or “Soup British Kitchen.”

Ho thinks there’d be a possible double standard to the reception of those names.

“Every regime has blood on its hands, every person has sinned, and all words can be interpreted as diabolical.”

I mean, that’s true. But also British people are still British and Korean people are still Korean and they aren’t necessarily their governments. Germans aren’t Nazis anymore and that whole period from the 1930s to 1945 kind of only has one connotation. If you called it “Soup German Kitchen” it would be a weird name, for sure, but not a controversial one.

Interestingly, Ho’s would not be the first restaurant to make use of the Nazi name. Thailand famously had a Hitler-themed chcken restaurant. Indonesia a Nazi Cafe.

In a filmed interview with HeraldNet, Ho admitted the decision to use “Nazi” in the name of his new restaurant was in part a “marketing ploy.” After talking with the neighbors and “seeing the fear in their eyes,” Ho said it “humaniz[ed] things” for him.

On his blog, Ho was more abrasive, at one point suggesting the new name might be the “Soup SJW Kitchen.”