‘Slow, small, imperfect’ — round two of pandemic Passover comes with its own perks and challenges 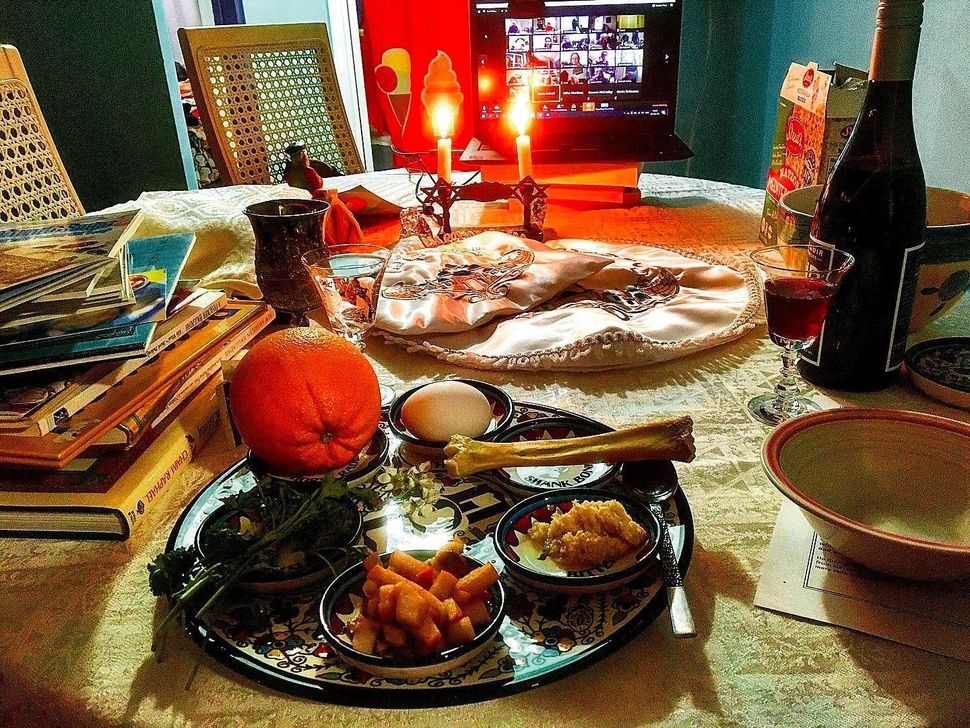 This time last year, I penned the Forward’s inaugural guide to virtual seders. But the one I organized for my own family in 2020 was a hot mess.

Muting was a Herculean feat that few could accomplish. Audio feedback dogged ancient blessings. There was an ill-fated experiment in communal singing. By the time we finished limping through the Maggid, I was ready to stress-eat an entire brisket. But in the chaotic first weeks of the coronavirus pandemic, it felt like a real achievement to complete the ritual. Besides, the seder didn’t need to be perfect — it was, I reflected at the end of the night, a one-time thing.

In 2020, a combination of shock and adrenaline propelled us through a surprisingly successful virtual Passover. Rabbis scurried to host virtual gatherings, and lifestyle experts told us how to stock a seder plate with pantry staples. After the holiday, respondents to a Forward survey said that virtual seders made Passover seem more meaningful than ever before. By far the most celebrated holiday among American Jews and the first to occur under lockdown, Passover may have even set the tone for a year of Jewish innovation, with synagogues consistently reporting high engagement with virtual events.

Now, loosening restrictions and a nationwide vaccine rollout are allowing some seders to resume their normal form. But many families who signed off from virtual Passover with a cheerful “Next year in person!” are gearing up for an unwanted second round of pandemic-era celebrations — whether that means another online seder or a much-reduced in-person one. With the novelty of virtual connection long gone and serious Zoom fatigue setting in, meeting the moment may be even more difficult than before.

As they dust off their seder plates and stock their virtual shopping carts with bitter herbs, many American Jews are feeling wistful for the crowded tables of yore. But for many, it’s also a time to commemorate a year of adaptation to unforeseen circumstances — and to imagine how the lessons of the pandemic might impact observance for years to come.

For Nancy Star, 65, the first pandemic seder was a big lift. She had more relatives at her virtual table than she’d ever hosted at her real one in Montclair, New Jersey. And she spent hours teaching an aunt and uncle in their nineties to use Zoom. All the effort felt rewarding when she saw them tune in and watched the youngest member of the family search for the afikomen on camera.

This year, she’s hosting a second such seder. In many ways, it’s an easier task: For one thing, no one needs a Zoom tutorial. But after a year of being separated from family, it’s hard to muster up the same enthusiasm. “It’s just even sadder,” Star said.

While Star still plans to cook a ceremonial meal and decorate her table with the candlesticks her grandparents brought from their native Germany, she finds herself missing the things that Zoom can’t replicate — like the “everybody’s-talking-over-each-other part” of Passover dinner.

Not everyone feels the same. In 2020, Chelsea Simon, 36, revived a lapsed family tradition of hosting interfaith seders. With her father and sister, she ended up leading 50 guests through Passover. The experience was so fulfilling, she said, “we knew we wanted to do a Zoom seder again.”

At Haggadot.com, a website where users can create their own haggadahs and find educational resources about the holiday, leaders are addressing these mixed feelings by both simplifying the seder and providing new avenues to adaptation. Rebecca Missel, the organization’s director of partnerships and operations, said that users are embracing features geared toward virtual observance: a tool to embed GIFs in the haggadah, for example, or a series of meditation videos to use during the seder.

For those looking to pare down their celebrations, Haggadot.com is hosting webinars on the seven essential steps of the seder. Its ten-minute haggadah, a pandemic-era invention, has proved to be one of its most popular.

“A lot of folks have learned their limits,” Missel said. “What they love most to do on Zoom, and what they don’t.”

Last year, Rina Sadun, 28, threw herself into virtual Passover, attending two virtual seders with the relatives and friends who normally gather at her family’s table in Austin, Texas. To stave off pandemic stress, she brainstormed creative ways to preserve longstanding traditions online: Instead of following the Sephardic custom of hitting each other with scallions during the singing of “Dayenu,” Sadun and her family messaged each other with the leek emoji.

But when it comes to technological fixes, Sadun said, “This year, I have nothing.” While she plans to attend a second-night Zoom seder, she’s most excited about hosting Passover for her immediate family, with whom she shares a quarantine pod, in the new house she bought over the summer. Instead of designing plague-themed sudokus, Sadun is cleaning her kitchen and scouring stores for kosher-for-Passover baking ingredients.

To her, a long-anticipated in-person seder is worth settling for a smaller crowd. “It was one of the things I was most excited about when I got this house — being able to host Passover,” she said.

Sadun isn’t the only one looking for a more tangible form of Passover observance. This year, Jewish lifestyle blogger Rebekah Lowin debuted tutorials in Passover crafts — among them an embroidered matzah cover and a DIY clay seder plate — and was surprised by how quickly her online classes filled up.

“I think we’re trying to recreate what it used to feel like, because we no longer take it for granted,” Lowin said.

Next year in person — sort of

The popularity of virtual services has sparked plenty of speculation about the future of Jewish observance. But those looking ahead to the post-pandemic world predict that online events will supplement, rather than supplant, in-person ones.

“I don’t know that people will have a two-hour Zoom seder in 2022,” Missel said. “But will they do an intro toast on Zoom, and then break up into smaller groups? Yeah, I could definitely see that happening.”

Archie Gottesman, the chief executive of JewBelong, concurred. She started a virtual comedy seder in 2020 and plans to continue it even after the pandemic ends. “There’s people who, no matter what, will want something online next year,” she said.

Even after she resumes in-person seders, Simon hopes to preserve some form of virtual gathering. She’s already working on an event for next year: a “genealogy seder,” which will tell the story of bondage and liberation through real family anecdotes. Because it involves a collection of far-flung relatives, that gathering would necessarily take place on Zoom. “I don’t know if this would have happened in the same way if not for online seders,” Simon said.

Considering the new forms of Passover celebration that have emerged during the pandemic, Rabbi Singer, of Modern Ritual, voiced her hope that this rule-bending era will result in renewed awareness of Judaism’s “countercultural” roots.

“Countercultural is doing something small and slow and imperfect, connecting in the way that’s right for the moment,” she said. “That’s something that has been learned in the pandemic.”

‘Slow, small, imperfect’ — round two of pandemic Passover comes with its own perks and challenges