In Taipei, an artist prepares for a Seder with his own Haggadah 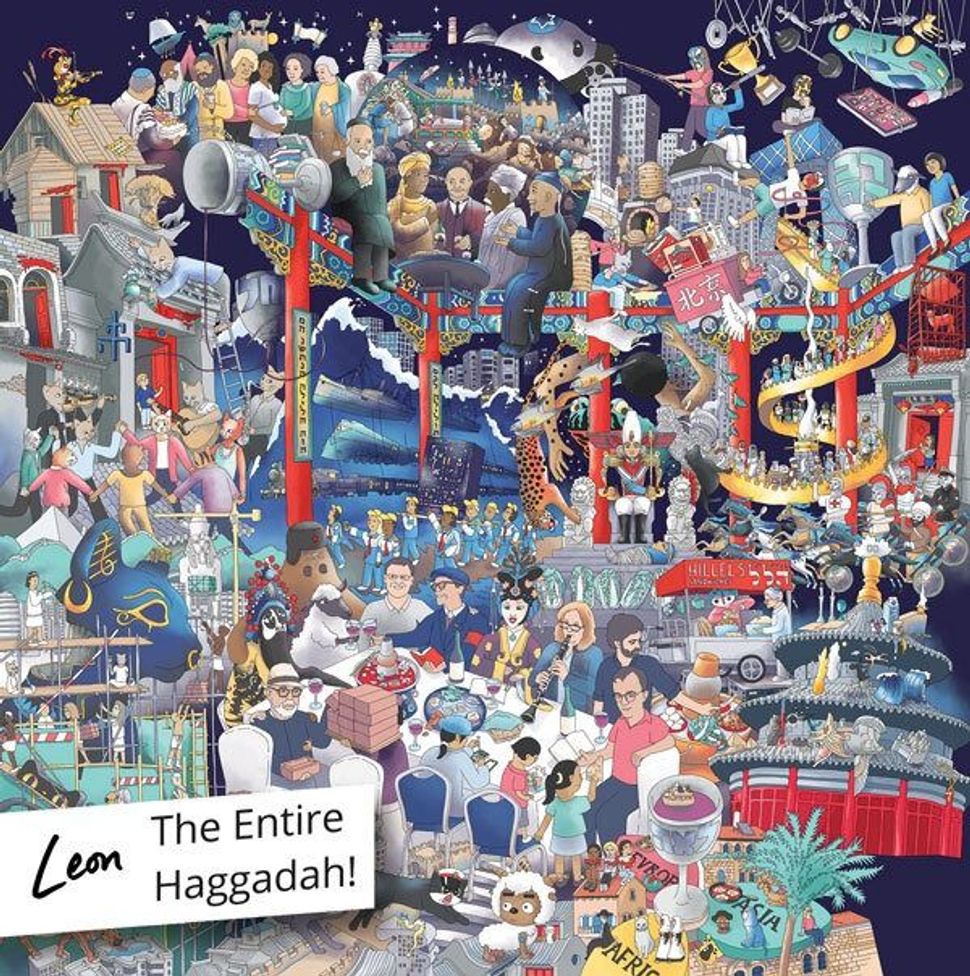 The entirety of “The Beijing Haggadah” in one panel. Courtesy of Leon Fenster

Leon Fenster’s community is hosting what may be one of the largest legal Pesach Seders of 2021 — they’ll be using his Haggadah.

The 34-year-old artist will lead the ceremony for a crowd of around 200 people in Taipei, Taiwan, where he has remained through most of the pandemic. It is a city in a country that had the virus well in hand from its earliest days. Circumstances there are unique for the world, but this year is different from all other years because of what Fenster will bring to the table.

For most of his life, Fenster, who hails from the Edgware neighborhood of London, has been a lay leader. He’s trained as an architect and is now an artist who draws whimsical “dream cities,” dense with people, creatures, buildings and “Tetris” block-like rafters. His job with the Taiwan Jewish Community (that’s their official name), assisting the 102-year-old rabbi as a khazn, is a new level of involvement for him, catering to a once-dwindling, largely expat community who’ve grown closer in a year with limited travel. Fenster got the gig after living for some years in Beijing, where he was a scholar in residence at Tsinghua University charting the intersection of the Chinese diasporic experience and his imagined Jewish cityscapes. 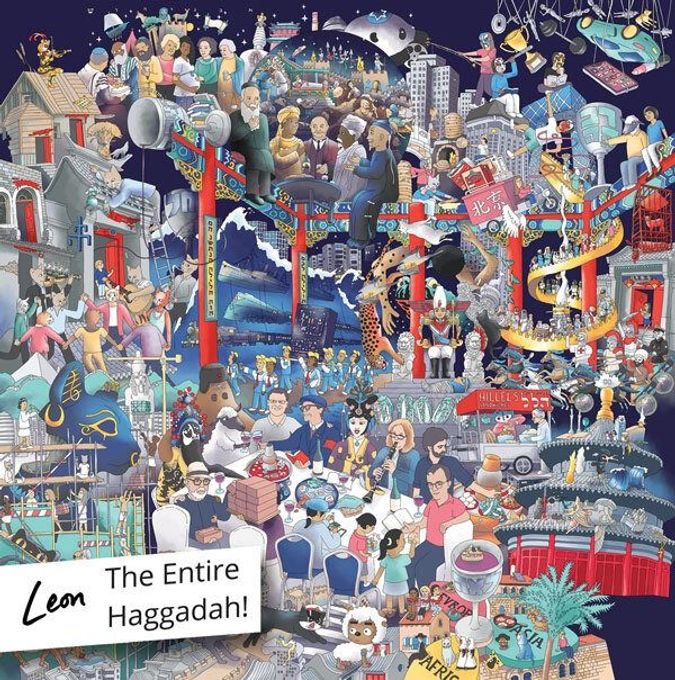 The entirety of “The Beijing Haggadah” in one panel. Courtesy of Leon Fenster

His dual role in Taipei — artist by day, khazn by Shabbat — meshes with a larger life mission. In commissions he does for Ketubot, or bustling images of family stories based on interviews, he reveals a deep engagement with Jewish narratives and how to tell them visually and across different traditions. As a khazn, he brings music to liturgy, and gets wrapped up into rhythms of niggunim and mantras that feed back into the circular nature of his art.

He always wanted to tackle a Haggadah, “our ultimate storytelling vehicle,” whose nonlinear structure speaks to his method. “The Beijing Haggadah,” one of the first of a series of city Haggadot, writes out the traditional in Hebrew, English and Chinese and uses local landmarks and community members of his onetime neighborhood to root the reader in the story. (You can order it now as part of a soft launch, but due to the pandemic and its shipping concerns, the official debut is timed for next Pesach.) On one page, an imperial tower beams out golden light, searching the hutongs for chametz. On another, the Four Children’s faces are shown in traditional Bian Lian masks.

“We’re told ‘B’chol dor vaDor,’ in every generation, to see ourselves as if we were in that story,” said Fenster, “so why shouldn’t we tell it in every city as well?”

I spoke with Fenster from his apartment on the edge of Taipei — specifically, the second floor landing where he works. We spoke about his process, how his sensibility melds with his current city’s aesthetic and the makeup of the Jewish community in Taiwan. The following quotes have been edited for length and clarity. 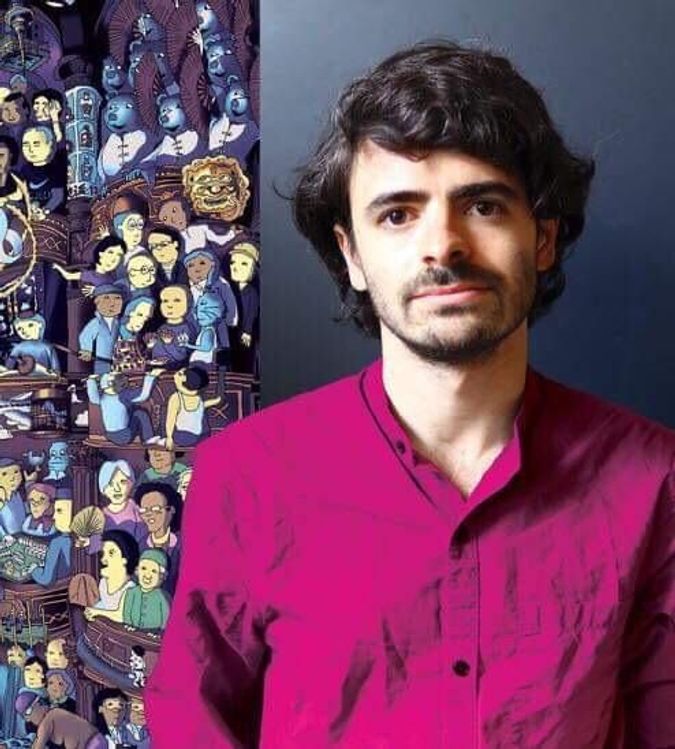 On his new community: By the 1950s there was a Jewish community that opened on the military base here, and then at some point another community began in the city with people who weren’t involved in the military. Over the years the two merged together and in 1975 established themselves formally with the government as the Jewish Community. Rabbi Ephraim Einhorn founded the community — he still leads every Shabbat; he’s 102, now. Unsurprisingly his ability to lead the community kind of declined over the years. And that’s how I got involved. Now we have on Shabbat we have about 40 to 60 people. Unsurprisingly, the biggest group is probably American as is true in most expat communities, but there’s people from South America, from Israel from Europe. There are Taiwanese people as well.

One of the things I love about this kind of community — actually a lot of Asian Jewish communities — is that, the people who are a part of our community, in another place they might be part of different synagogues ‘cause everyone find their own tribe as it were, but here, this small place, we all lump ourselves together, we all chip in, and it creates a really beautiful kind of community.

Living through COVID in Taipei: Taiwan’s had an amazing COVID story. It dealt with it really effectively from the beginning. There’s only been 10 deaths from COVID in a country of something like 24 million. We basically never went into lockdown, there was a brief period of beginning where we avoided public gatherings. But now, the only precaution we take is we wear masks indoors, but otherwise life has gone on pretty much as normal almost since the pandemic began. It’s probably the exception in the world at the moment. 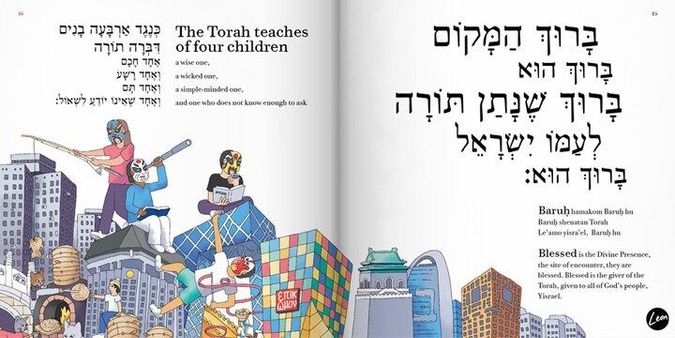 I always feel guilty when I say this on Zoom calls with other communities. It’s kind of helped us actually, because ordinarily people here would be traveling a lot, back and forth, coming in and out, but no one’s leaving because everyone wants to stay in this beautiful bubble that we have.

His routine (or lack thereof): I don’t really have a routine. I try to take up a walk up the hill in the morning and then after that just see what happens. I usually begin with ink on paper. I do line work, and then I add color using inks or watercolor pigments or acrylics, then I’ll scan that and print a digital version, and then digitally add color as well. I quite enjoy that. I either work kind of upright or I just spread out on the table on the floor.

Why he’s working on Haggadot: I pick up on this non-linear approach we have to Jewish storytelling — liturgy, Tanakh and Talmudic stories — the way we still tell stories that kind of fall back on themselves and have a kind of chaos to them. I think all of my art is trying to do that in some way. For me, the Haggadah is just the ultimate vehicle of that kind of story. It’s telling the story, which you could just tell chronologically, but instead, we tell it from all these different vantage points at once. Now I’m working on one for Taipei, trying to depict the whole city in an artwork in that similar kind of style,

How his location inform his work: I get the most ideas about what to draw walking around very dense cities. Everything’s on top of each other and you find these unusual strange stories next to each other. I often think about the fact that everyone here lives in high-rise buildings. I’m on the 14th floor. We’re all just stacked and there can be a totally different life living like just 10 feet below me and I have no idea what’s happening in that life, so then you see it on the street because everyone’s packed in a much denser space. 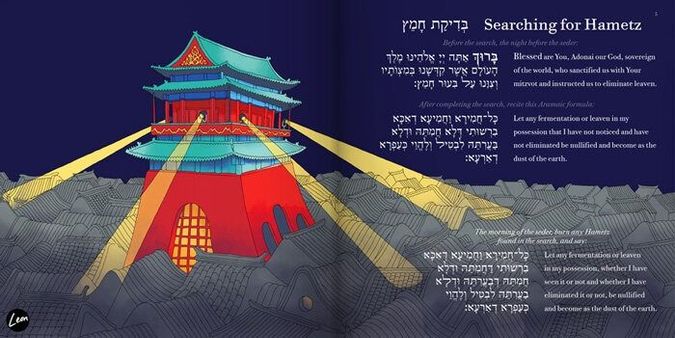 A tower in Beijing searches alleyways for chametz. Image by Leon Fenster

Finding a Judaism specific to his surroundings: Something I’ve been trying to do is work on thinking about a Judaism that’s very kind of rooted in this place. For Sukkot a friend and I sourced a local four species. There are versions of them local to Taiwan as well. Partly it’s because of the climate. I had a lot of help from a Christian friend who had links with churches around Taiwan. With some of their help we got together and created this kind of Taiwanese lulav and etrog network, entirely local.

The most meaningful responses to his first Global Haggadah: The idea of just having Chinese and Hebrew on the same page itself is a bit of a kind of historical thrill because that so rarely happens. On Facebook one of the things that’s really nice is a lot of families have been contacting me who have roots in Jewish and Chinese culture. They’ve been saying “oh, we’re really glad there’s now a piece of literature or a product that does this.” Not that this is the first, but the end result still contains both those cultures together. 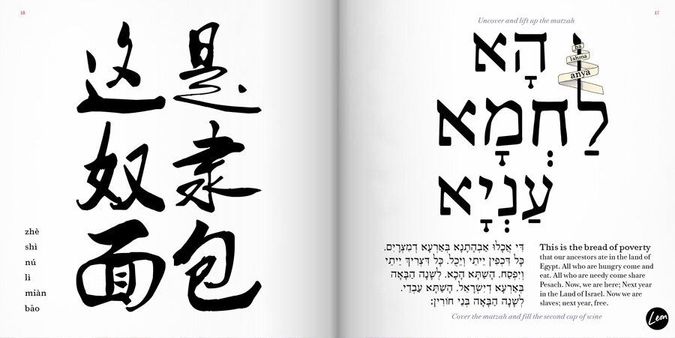 The Ha Lachma Anya in Chinese, Hebrew and English. Image by Leon Fenster

In Taipei, an artist prepares for a Seder with his own Haggadah