Is the Israeli soccer team cursed? 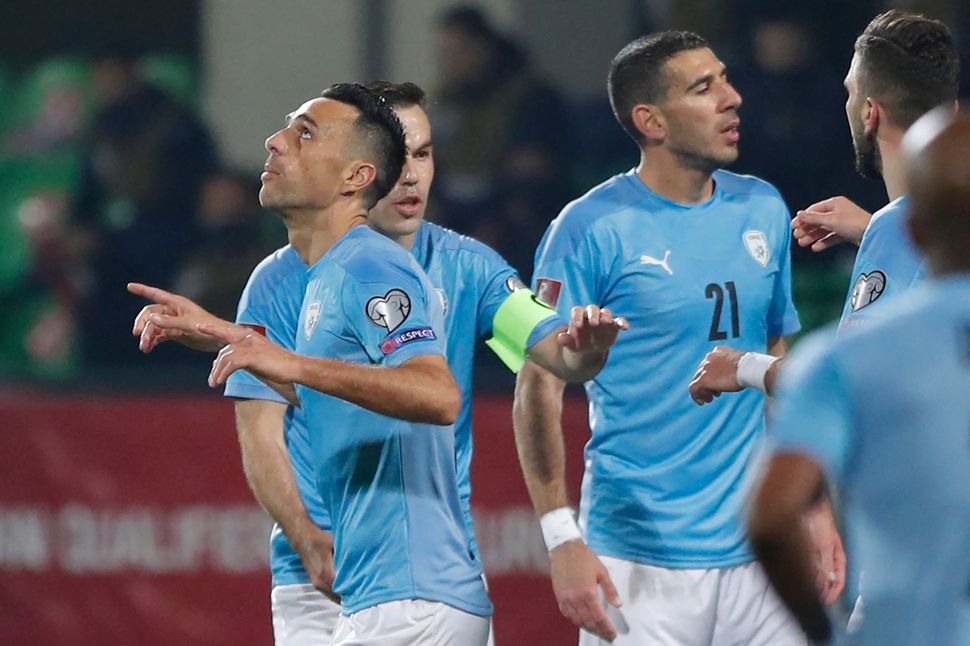 The Israeli national soccer team is over 70 years old, but has caused everybody a lot of aggravation – especially over the past 50 years. The current aggravation is the topic of “Common Goal,”a fascinating documentary by Shuki Guzik that had its U.S. premiere at the Other Israel Film Festival in 2020 and which came to my attention at the Seattle Jewish Film Festival in 2021.

Mirroring the country itself, Israel’s soccer team began as a plucky little outsider surviving in a hostile environment. Perhaps counter-intuitively, changing geopolitics and an improvement in the standard of Israeli soccer players over the past few decades has led not to an easing of the situation, but to more soccer tsuris for the Jewish state.

For the footballing authorities, aggravation has come from the difficulty of deciding how to accommodate a Middle Eastern country that is at war, or at least on deeply suspicious footing, with its neighbors. The answer — to move from the Asian Football Confederation (of which Israel was a founding member) to Oceania (for non-geographical reasons!) to the European soccer confederation — has brought its own problems.

For the Israeli soccer fan, the aggravation comes with the team’s perennial underachievement. Israelis are still excited about basketball, but over the past generation, they have become increasingly fanatical about European soccer and soccer in general. Before the pandemic hit, there was a sizable niche industry specializing in weekend trips for Israelis to travel to major European games, such as el Clásico (the game between Barcelona and Real Madrid). Israeli players have become familiar names in England, Spain, Scotland, Austria and Belgium among other leagues. But, despite having several golden generations and a series of near misses, Israel has only qualified for one FIFA World Cup — in 1970.

For the Israeli polity, the aggravation comes from the representation in the team or the reception of that representation. After Rifaat “Jimmy” Turk was picked for the national team in the early 1970s and played for Israel at the 1976 Olympics, Arab players have continued to be selected. In his time, Jimmy Turk was routinely abused for being an Arab and, sadly, the practice continues — especially when the Arab players are perceived as being at fault for a goal conceded or for the team’s defeat.

A More Diverse Squad: Moanes Dabbur is one of the team’s non-Jewish players. Courtesy of Go2Films

Israel and soccer are not alone in this. Sport can surface tribal feelings in unpleasant ways across the world. Social media continues to host racist abuse of soccer stars in Britain, NFL owners blackballed Colin Kaepernick for his beliefs, and a slew of anti-transgender laws are being proposed by cis male legislators across the world. Social media and the cheap political boost of jingoism for politicians like Boris Johnson, Donald Trump and Benjamin Netanyahu who have little of substance to offer their countries, have made the situation worse. Like those other cases, Israeli soccer sensitivities both reflect and exacerbate existing divisions in society.

Guzik’s focus is on a team hoping to qualify for a major tournament with a roster that includes an unprecedented number of Muslims, including the captain, Bibras Natcho. Natcho, the heart and soul of the team, is a member of a tiny sub-group of Israeli Sunni Muslims known as the Circassians who serve in the army like the Druze but are known for their separate identity and European features. Natcho is not a star player but he is widely respected in Israel. His blonde, Circassian wife talks about her decision to cover her hair, and about the discrimination that she faces, even when trying to take their children into a playground. Yes, Natcho can come and guards will then let them in because they are his fans, but that’s just favoritism trumping discrimination, not an end to discrimination.

As with Emirati Sheikh Hamad bin Khalifa Al Nahyan’s recent investment in the racist Beitar Yerushalayim soccer club — a team that will famously not field an Arab player — some look at the involvement of Muslims with the national team as an affront to the purity of the Jewish state, while others look to the involvement as an appropriate move toward the integration of Israel’s large Arab minority.

For the qualifiers that Guzik follows, the national team not only has a Muslim captain, but it has six other non-Jewish players. As one of them, Moanes Dabbur, says, it would be impossible for him to suffer the weekly abuse he received when he was at Maccabi Tel Aviv at the level he gets as a member of the national team. The Arab players don’t sing Hatikva, the blatantly partisan national anthem that talks about a “Jewish soul.” (The Forward has written about the need for a new anthem.) But, as captain, Natcho is scrutinized for his refusal to sing a Jewish song to a flag containing a Jewish star.

In Hebrew, the film takes its name from a line in the national anthem, “Od lo avda” – “we have not yet lost.” In the context of Hativkva, the meaning is “we have not yet lost our hope” and it is tied to the enduring hope of the title. In the context of a soccer game and competition, it suggests the opposite, that we are about to lose the game — as we always do. The English title “Common Goal” is more optimistic and the European influence on the soccer is generally positive.

Dabbur moved to play in Austria and one of the reasons that there are so many non-Jews on the Israeli team is the opportunities that have opened up for them to play in Europe. Jewish Tomer Hemed and Arab Beram Kayal even played together as friends in Brighton, England. There have always been certain equalities of opportunity for Arabs, Jews, Christians, Muslims in Israeli soccer but, as the standard of Israeli soccer has risen, the elite level does not just comprise the disappointing Israeli Premier League with its concomitant anti-Arab sentiment. Now, all sectors of Israeli society can escape to global soccer.

Kayal’s wife, who went to Scotland with him when he was signed by Glasgow Celtic and studied interior design at college in Glasgow, is frank about the culture shock that she and their kids will face on their return to Israel. Her training is for a UK market and her small children have only ever really lived in Scotland and England. “It will be rough, it’s an entirely different mentality.”

Improvement does mean that Israeli soccer can attract European coaches. Guzik doesn’t overplay it — there are no in-depth behind the scenes interviews with him as there are with the five non-Jewish players — but he gives screentime to the coach, Andreas Herzog. Would an Israeli have fielded so many non-Jews or avoided it because of the sensitivity? And, if he had avoided it, would that have been discrimination? Guzik leaves the questions unasked, just implicit in tension between the facts and the shit-stirring of popular radio and TV where politicians, pundits and former players are happy to take sides.

Despite his storied name, Herzog is not Jewish or related to the sixth president of Israel, Chaim Herzog. One of the charming aspects of the film is how “Andi” becomes increasingly Israeli as he’s exposed to the vicissitudes of the campaign. The abuse from the fans he might have expected, the unavailability of Dabbur for a crucial game because of his longstanding plans for a traditional village marriage less so. And, the calm Herzog, one of Austria’s most-capped and respected players, loses his temper in a most Israeli fashion when his team manage to lose a game despite all expectations, all the play and all the need for a win!

There are, of course, demographic, political and sporting reasons why Israel’s soccer team continues to disappoint, though hope does spring eternally in the East. While this film shines a fascinating light onto some of the people and trends involved, it mostly suggests that Israel’s international footballers of all faiths are decent young men in a no-win situation, playing for a team that seems biblically cursed.

Is the Israeli soccer team cursed?