For Albert Camus, events in Gaza would have seemed all too familiar 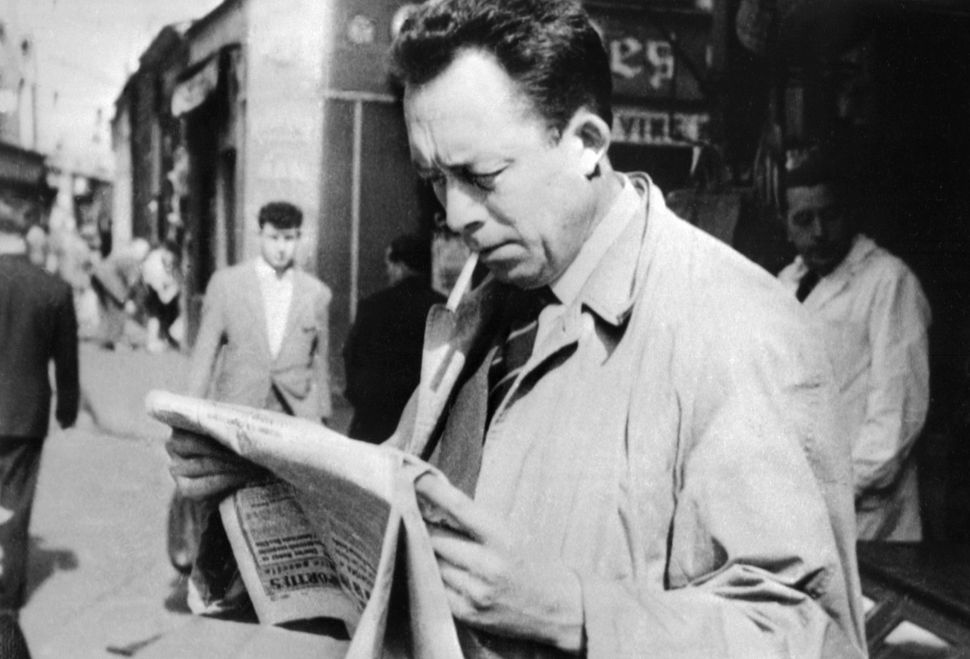 The situation was impossibly precarious and a solution seemed practically impossible. Two communities, one composed of indigenous Arabs and the other of mostly European immigrants, laid claim to the same swathe of arid hinterland and Mediterranean coastline. Fragile coexistence had given way to fratricidal conflict; one side mobilized technological advantages and the other employed terrorist tactics. Yet the consequences, though shockingly asymmetric, were equally tragic: the indiscriminate killing of civilians on both sides.

65 years ago, Albert Camus faced this very situation as he prepared to give a public address in his native and war-torn Algeria. In 1954, the growing demands for independence from France made by the country’s Arabs and Berbers led to what is known as “la guerre sans nom” — the war without a name fought between the Algerian fellagha and the French military. By January 1956, when Camus flew from Paris to Algiers, the horror of the Philippeville massacre, when Algerian fighters and French soldiers murdered and mutilated hundreds of civilians on both sides, was still fresh.

Horrified by the gyre of violence taking civilian as well as military lives, Camus had decided to intervene. This was no small matter: By 1956, this son of impoverished pieds noirs — the name given to French colonists in Algeria — had become, thanks to his brilliant novels and essays, one of Europe’s most powerful voices on behalf of repressed and dispossessed peoples everywhere. As he declared in his Nobel Prize speech one year later, “the writer cannot put himself today in the service of those who make history; he is at the service of those who suffer it.”

For Camus, suffering in French Algeria was an equal-opportunity affliction, spilling over ethnic, religious and ideological lines. In the months leading to his visit to Algiers, he published a series of editorials decrying the murderous tit for tat playing out in Algeria. “We know nothing of the human heart,” he wrote, “if we imagine the French Algerians can forget the massacres at Philippeville.” “It is another form of madness,” Camus added, “to imagine that repression can make the Arabs feel confidence in France.”

What to do, then? First of all, Camus replied, avoid fantasizing. Neither the French nor Arab communities can eliminate the fact of one another’s existence. In Algeria, Camus declared, the two peoples were “condemned to live together.” How, then, can this common sentence be managed? In a series of editorials he published in the L’Express — a weekly magazine opposed to French colonialism — Camus made a powerful case for a civilian truce. Proposing a conference at which the opposing sides would sit and face one another, they would confront their shared humanity. Such a meeting, Camus dared to believe, would “give meaning to the fighting—and perhaps render it pointless.”

In his final editorial, published shortly before his trip, Camus showed his hand: as a first step, all sides must agree to a civilian truce. Given the mounting body count of French and Algerian civilians, Camus lambasted each side’s habit of holding the other responsible. “Soon only the dead will be innocent,” he exploded. A truce, Camus concluded, might allow us to find a solution. More important, though, it will allow us to “sauver les corps” — save lives.

On Jan. 19, shortly after arriving in Algiers, Camus surveyed the expectant gathering of Arab and French Algerians who came to the auditorium at the Muslim Cercle de Progrès to hear him speak. Nervous but determined, Camus initially set a low bar: this meeting would show, at the very least, that “an exchange of views is still possible.” With such an exchange, both sides might then acknowledge each side’s “right to security and dignity on our common soil.” Looking at the crowd of faces, the existential thinker who coined the philosophical concept of absurdity now employed it in a more immediate sense: How absurd, he declared, that he was now pleading for what seemed so obvious: “that a handful of innocent victims be spared.”

Absurd, yes, but also irrelevant. By the time Camus uttered these words, a mob of pieds noirs had massed outside the meeting hall. Chanting “Hang Camus,” they began to throw stones through the windows while pressing forward against the cordon of police. As soon as Camus finished his speech, affirming that both sides must refuse to practice and submit to terror, he was hustled out to safety by a scrum of childhood friends. Terror became the rule while those supposedly condemned to live together instead seemed condemned to slaughter one another.

In 1962, two years after Camus died in a car crash in southern France and six years (and hundreds of thousands of other deaths) after his public appeal for a truce, a France teetering on civil war and an Algeria tasting independence signed a peace treaty at the French spa town of Évian. It was not because each side had done what Camus asked them to do — namely, “make the honest effort to think over his adversary’s motives.” Instead, they came to terms because both had suffered too long from the consequences that Camus had predicted if they failed to heed his advice: that extremists and violent would carry the day.

Accompanying the signing of the Évian Accords was the first and last cease fire declared during the war. As the world breathes a sigh of relief with yesterday’s declaration of a cease-fire between Israel and Hamas, it knows that it was not the first and will not be the last. No doubt Camus would have warned that the parallels go only so far between the guerre sans nom between France and Algeria and the war without a name between Israel and Gaza. He would also have warned, however, that the parallels go far enough to remind all parties that dignity and security can only come on common soil inhabited by two independent peoples.

For Albert Camus, events in Gaza would have seemed all too familiar