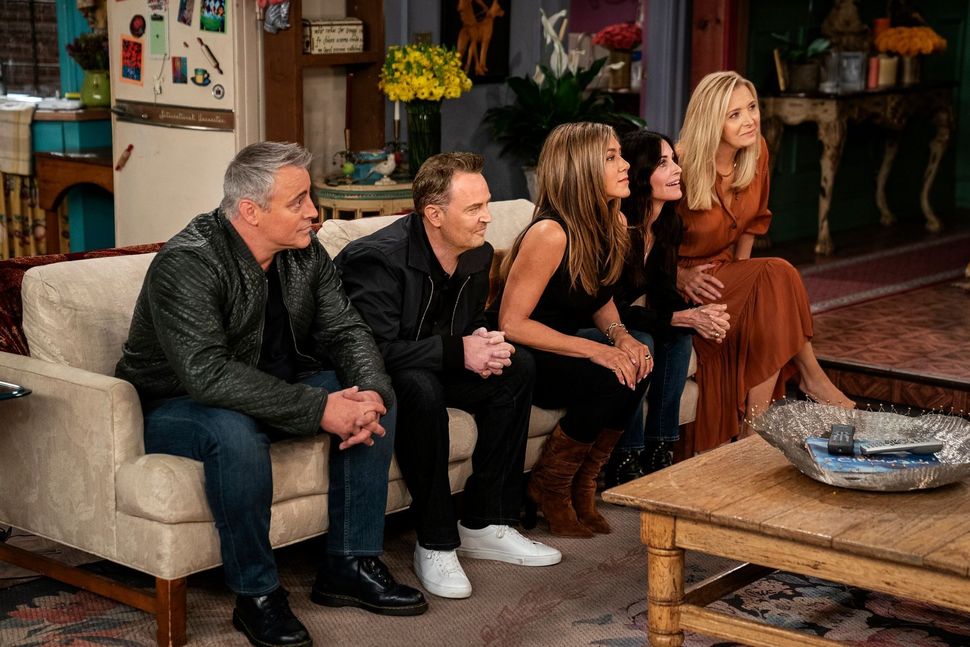 The cast enjoying some decades-old bloopers. Courtesy of HBOMax

When I first heard “Friends” was going to have a reunion, I imagined a sappy, but nostalgic, episode of the gang all gathering, now with a gaggle of kiddos, to reminisce about their glory days in New York and kvetch about parenthood and growing old. Since it would clearly be a huge ratings hit, I figured they’d extend the show’s usual half-hour runtime to an hour. 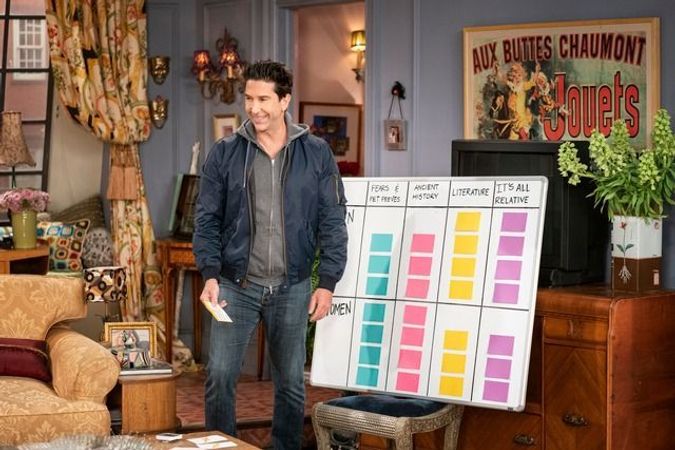 Instead, it was an unscripted, though heavily-edited, nearly two-hour talk show hosted by James Corden, despite his total lack of connection to the show. The gang was back together, yes, but as actors, not characters. As they pointed out during the reunion, “Friends” ended too neatly to reopen any of those storylines; the characters had been sent off to live happy lives, and those would have to be upended to make any sort of narrative. No one wants a story about Monica and Chandler’s divorce or Joey’s increasingly pathetic bachelordom.

So what we got was something between a late-night special and a nostalgia-heavy clip show composed of favorite episodes, punctuated with bites of interviews with fans and guest stars, as well as the show’s creators.

There was a sentimental, plunky soundtrack set to shots of the cast returning to the soundstage, hugging, stroking favorite set pieces and tearfully giggling at memories. Interviews with creators Marta Kaufman and David Crane about the casting process felt like they would have been part of a DVD behind-the-scenes special feature, back when those existed. Recurring characters, such as Maggie Wheeler, who played Janice, and Tom Selleck, who played one of Monica’s boyfriends, walked on to give a 30-second — or shorter — spiel about what an honor it was to be on the show. 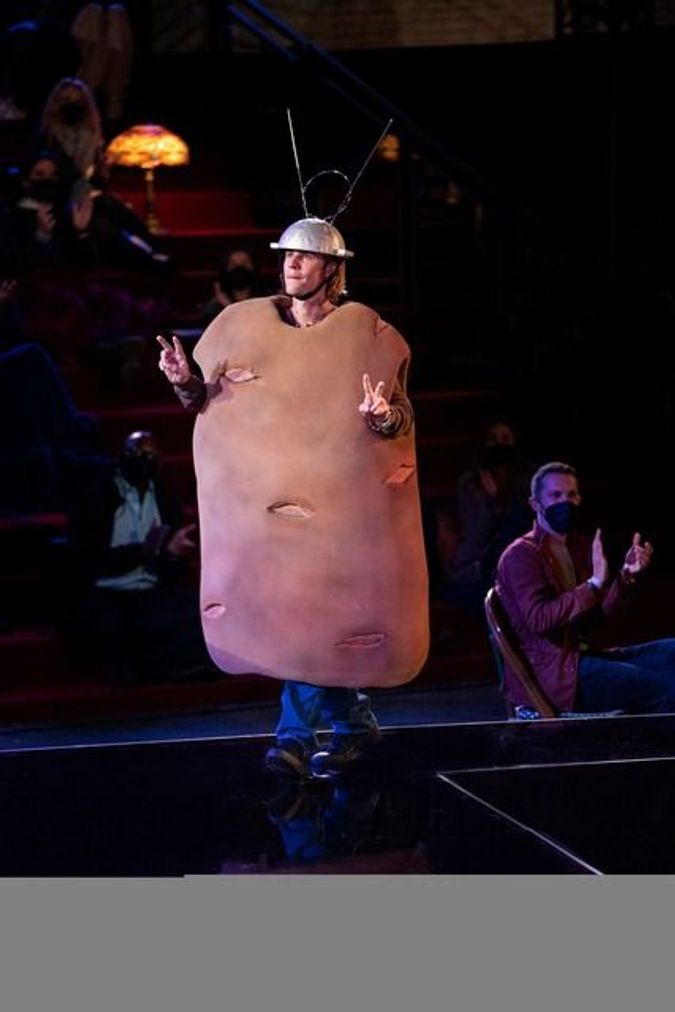 Why was Justin Bieber there dressed as a space potato?? Courtesy of HBOMax

There were also some strange gimmicks. The Hanukkah Holiday Armadillo was part of a fashion show of iconic costumes, modeled by celebrities such as Justin Bieber and Cara Delevingne. There was a barbershop quartet and a gospel quartet. Kit Harrington and David Beckham, neither of whom were ever on the show, talked about how much they loved “Friends.” Lady Gaga appeared to play Phoebe’s big hit, “Smelly Cat,” and awkwardly thanked Lisa Kudrow for being “the different one.”

The interview portions featured bits of trivia, many of which had already been aired in various other individual interviews and articles. Showrunner Marta Kaufman recalled that her rabbi asked her whether Ross and Rachel would ever get together, for example, an anecdote that has already been printed by every Jewish publication. There were a few newer fun facts, too, such as the depth of actor David Schwimmer’s hate for the monkey who played Ross’s pet, and behind- the-scenes shots of the time when Matt LeBlanc, who played Joey, dislocated his shoulder mid-scene.

But the reunion episode largely relied heavily on the — likely correct — assumption that “Friends” is such a beloved and nostalgic show that people would be delighted to simply see the beloved faces and to hear the familiar voices in whatever form. After all, you can only do a clip show once you have a devoted audience — otherwise there would be no reason to watch bits of episodes you’ve already seen. 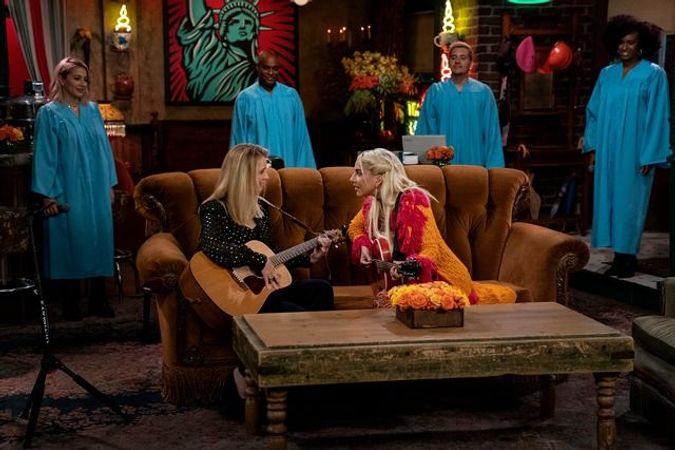 The reunion episode had no throughline; it was just a bloated hour and 44 minutes of factoids spliced with sappy interviews. The main point seemed to be that the cast of “Friends” were all, in fact, friends — even though much was made of how they hadn’t all been together since the show ended. You would only watch the whole thing if you would watch absolutely anything “Friends.”

But that’s exactly who the show was for — and it’s not a small number of people. The producers didn’t need to load it with random celebrities who barely even took part in the show. James Corden was barely on screen, and the few questions he asked felt clunky and obvious, even when he asked a “cheeky” question about whether any of the cast ever hooked up.

The best moments were when the cast reminisced without prompts, without random celebrities, and without an audience, watching their own bloopers and cracking jokes about stealing each other’s scripts. It was the most human, least kitschy part of the show, lacking the maudlin soundtrack of the rest. They felt like devoted fans, just as nostalgic for the show as everyone else.

And those moments were the closest it came to being a real reunion episode of “Friends” — a show about a group of friends, hanging out, cracking jokes and making memories.