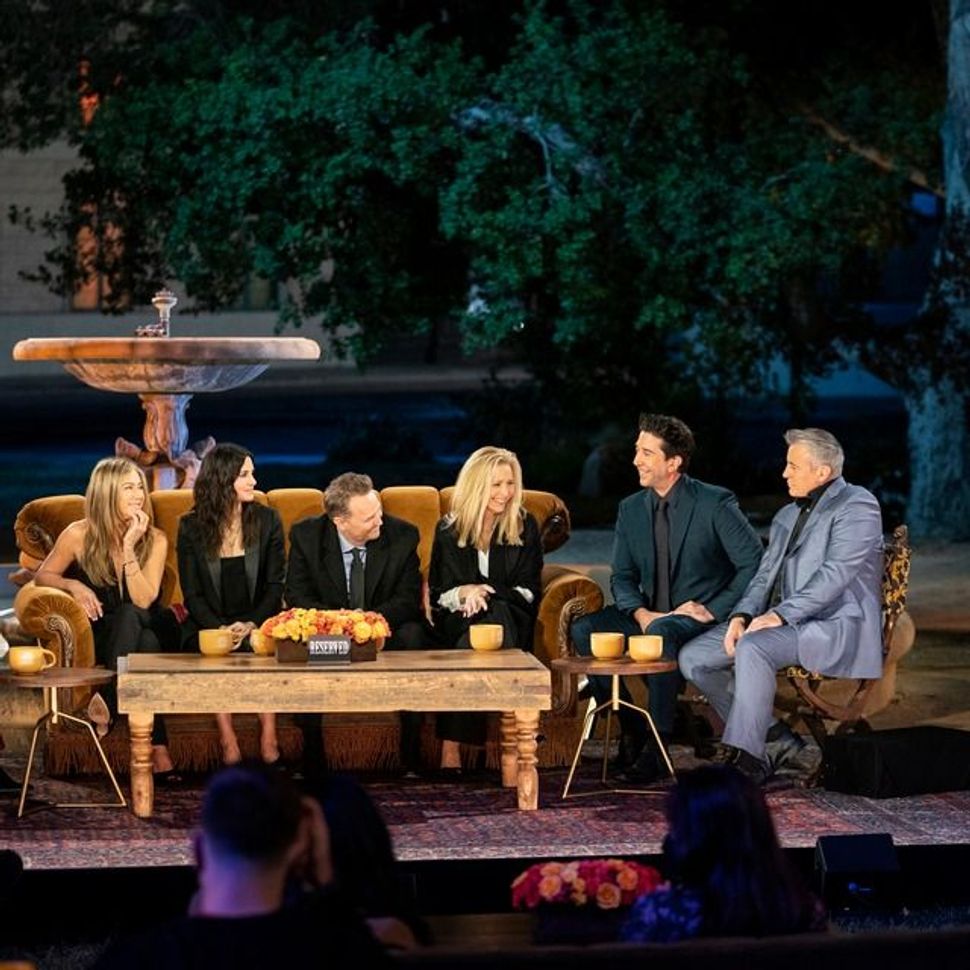 I grew up in one of those households without cable, a PBS-only child. “Friends” was a show I dreamed of being old enough to be allowed to watch; it felt like the most hip, adult network sitcom. In my teens, I watched it all on DVDs ordered one by one from Netflix, if you remember back when that was their whole schtick. (My parents, in fact, still do that.)

Now, the gang is getting back together — “Friends” is having a reunion special on HBO, an unscripted episode that will not really be “Friends” the show so much as just the cast getting together to hang out on the same soundstage they used to film on, and maybe dish a bit about the iconic debates — the trailer shows them all talking about whether Ross and Rachel were really on a break.

However, in the years since the show aired, I am not alone in having tried to rewatch it as comfort TV and realizing that “Friends” has, uh, not aged well.

This is true in numerous ways — Monica’s fat suit and the body-shaming jokes; Chandler’s transgender father; Ross being presented as a Nice Boy who always finishes last when he was really a jealous jerk. And then there are the Jewish references. 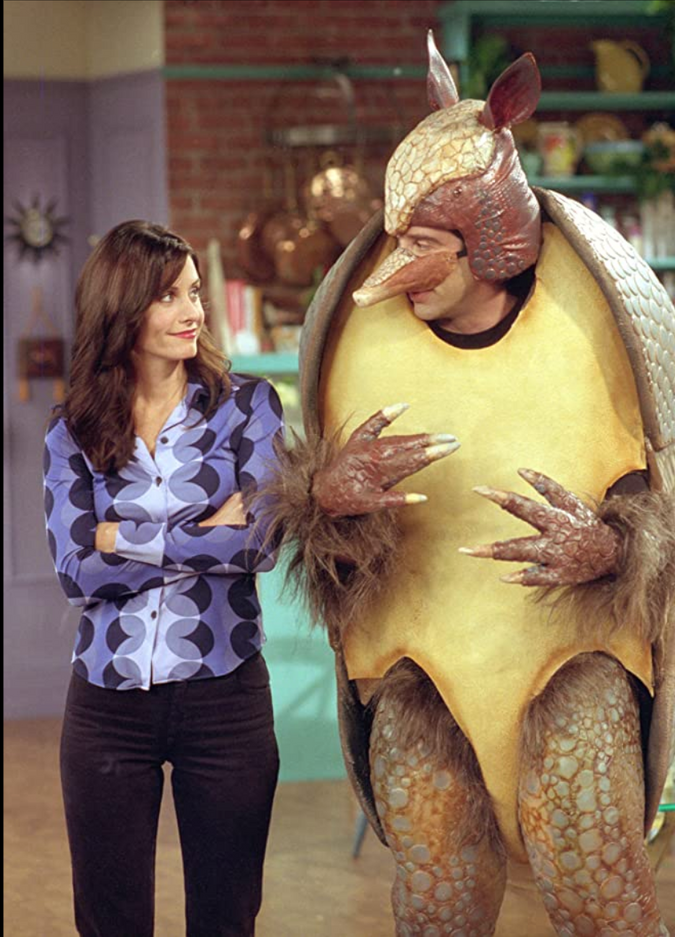 Ross as the Holiday Armadillo Courtesy of Getty Images/IMDB

Many American Jews who came of age in the 90s or early 2000s remember the Holiday Armadillo episode. Ross has custody of his son Ben for the winter holidays, seemingly for the first time, and he wants to teach Ben about Hanukkah and his Jewish roots. But Ben is far too pumped about Santa to listen to a tedious, unfamiliar story about war in ancient times. Ross is, after all, a paleontologist and generally portrayed throughout the show as both boring and uncool — just like Hanukkah, the less fun, less cool holiday.

Ross eventually caves, worried he’s ruining Christmas for his son, and tries to rent a Santa costume. But it’s too late, and the only thing he can get in time for Christmas Eve is an armadillo suit, which he desperately tries to pass off as a character akin to Santa’s elves who celebrates both Christmas and Hanukkah. Even then, it’s only when Chandler — who shows up dressed as Santa to save the day — tells Ben that Hanukkah is worth knowing about that the kid is willing to listen.

This is one of the show’s more explicit Jewish moments, but there are plenty of other more implicit takes on Jewish identity — all just as negative. The show’s approach to Jewishness is on par for its era. When Fran Drescher pitched her sitcom, “The Nanny” — which has aged far better — she had to argue with the network to have her character stay Jewish.

Yet despite the largely Jewish writing room of “Friends,” its Jewish creators, and part-Jewish cast, the show clearly didn’t fight for its Jewish identity. Jewishness rarely plays as central a role in the show as it does in “The One with the Holiday Armadillo.” But it’s there. 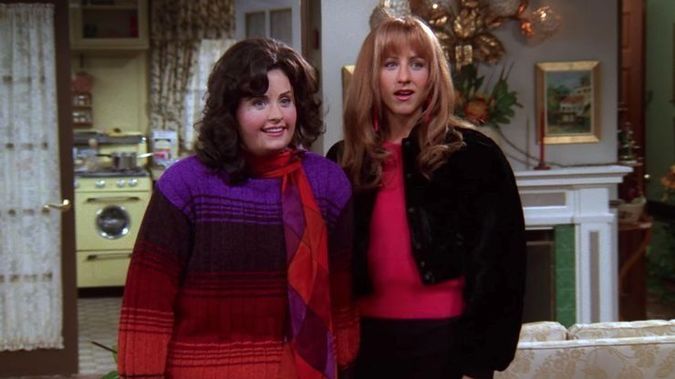 Monica in a fat suit and Rachel with her fake nose. Courtesy of NBC/YouTube

Rachel Green, the superficial, girly one, isn’t explicitly Jewish. But we can guess by her name — and her orthodontist ex, her expensive shopping habit on daddy’s dime, her distant parents and her nose job. She’s clearly the stereotype of a Jewish American Princess.

Years after the show, its creators said they always imagined Rachel as Jewish. But since it was never official, she can only be identified as such by negative stereotypes. There are no sumptuous Passover seders, no bubbe making knaidlach, no meditative Kabbalat Shabbat services. There’s just an obsession with designer clothes and a large, fake nose in flashbacks to high school. 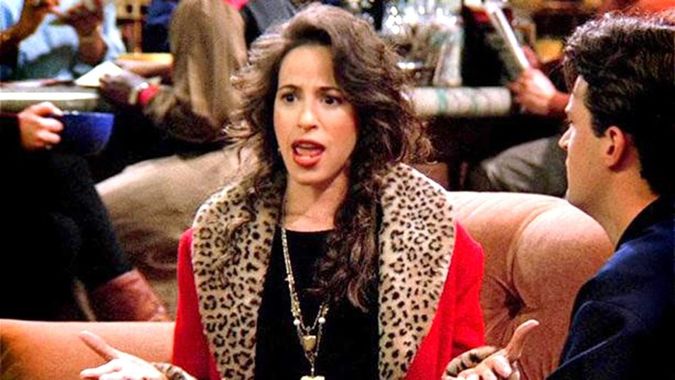 Janice in “Friends.” Courtesy of nbc

We know Janice, Chandler’s on-and-off girlfriend, is Jewish largely by her resemblance to Fran Drescher’s character in “The Nanny.” She’s loud, nasal and nagging, with an outer borough accent. Yet she’s also sexualized with bright, tight clothing and big hair. She’s too pushy, too touchy, she pinches people’s cheeks. Most importantly — unlike Fran in “The Nanny” — none of this is presented as ultimately attractive, warm and positive.

And while we explicitly know Monica and Ross are Jewish, they rarely mention it. We know they’re Jewish when we meet their parents and hear them nag Monica about her weight and her career and her dating prospects. We know because Ross is a schlubby nerd and Monica is neurotic. But they get none of the complex struggles of Jews moving through a largely Christian society, no worries about taking off work for Jewish holidays or feeling left out of Christmas carols.

None of these traits are balanced out by positives, nor are they framed as endearing quirks. They are bad habits for the characters to grow out of. Over the course of the show, Monica gets less neurotic. Rachel gets less superficial. Janice gets repeatedly dumped. 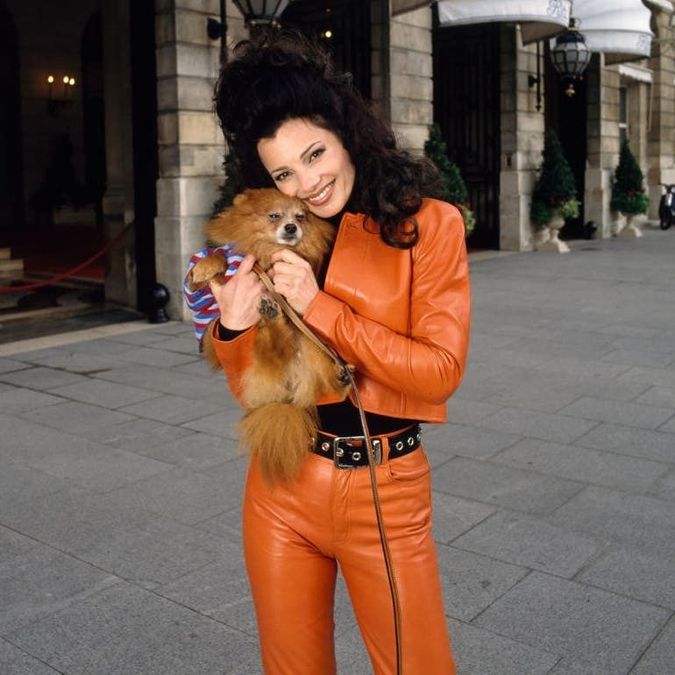 Fran Drescher as the nanny, big hair on display. Courtesy of CBS/Getty Images

You may have noticed I’ve made several references to “The Nanny,” another very Jewish show of the same era. There, neuroticism and a shopping addiction also define Fran Fine, the titular nanny, but they are framed as part of what makes her delightfully unique. Her Jewishness also includes a tight-knit family and joyful holiday celebrations. She exposes the milquetoast, wealthy family she nannies for to a richer world, and while they find her frustrating at times, she is beloved.

I didn’t grow up watching “The Nanny,” which seemed too shrill and superficial to me at the time — perhaps because I’d absorbed the message of “Friends.” And watching “Friends” will always be nostalgic for me. But if you want to relive the 90s — the fashion is back in, after all — there’s a better option.