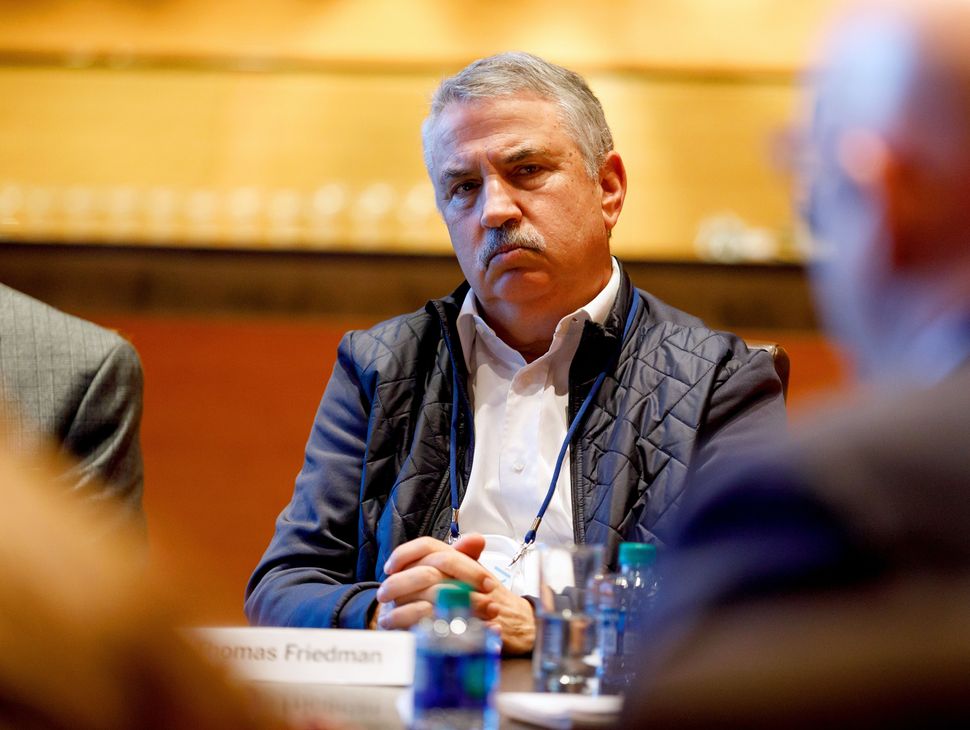 It is astonishing to read a major newspaper assert that it is not necessary to understand the language someone speaks.

“To understand the political drama playing out in Israel and the tentative formation of a national unity coalition to topple Prime Minister Benjamin Netanyahu, you don’t need to speak Hebrew,” opinion columnist Thomas L. Friedman wrote in The New York Times.

“You need to understand only one thing: Netanyahu makes his enemies even angrier than Donald Trump does,” Friedman continued, asserting that the way to understand Israel is to understand America.

These sentences — and the fact that they made it past an editor — highlight two dangerous trends in the United States. First, there is the growing idea that there is no need to understand language. And second, there is the strange insistence that to understand another person — or another country — all you need to do is understand yourself.

The first idea is especially popular in American universities, who are steadily eliminating the language requirement.

“The percentage of four-year colleges and universities requiring students to take courses in languages other than English dropped 17 percentage points between 1995 and 2010, to about half of all institutions,” according to Inside Higher Education.

It’s getting worse lately, as more and more Americans agree with Friedman.

“Between fall 2013 and fall 2016, U.S. enrollments in languages other than English fell 9.2 percent,” the Modern Languages Association reported.

Friedman’s stance on language is ironic, because he himself “lived on a kibbutz and learned to speak Hebrew,” according to a 1986 piece in The Los Angeles Times.

“Then he majored in Middle Eastern studies and Arabic at Brandeis University, studied at Oxford University in England and at the Hebrew University in Jerusalem and American University in Cairo,” the LA Times reported.

But that doesn’t change the lie that language is unnecessary. Not understanding it costs lives.

During the COVID catastrophe, both the U.S. and the U.K. were slow to translate life-saving information into languages other than English. And COVID patients experienced anguish because they were not able to communicate in their language, as The Chicago Tribune reported.

Monolingual journalists, who dominate coverage of Israel, should be a news story — because their monolingualism lets them catch mere pieces of a complex reality.

Journalism schools aren’t helping, because they don’t require language study. The Politics, Policy and Foreign Affairs curriculum at the prestigious Medill School of Journalism at Northwestern, for instance, has no mention of foreign languages in its curriculum, published online.

It’s no wonder that the difference in reporting on Hebrew-language Kan News — the Israeli TV station that I watched live during the recent tensions of a 4500-rocket barrage from Hamas on Israel, another attack in response on Gaza, and violent civil unrest within Israel — and English-language outlets was stark.

One moment stuck out. An Arab family in Lod, Israel, lost a father and a teenage daughter to a rocket attack from Hamas. Kan News sent Akiva Weiss, a Haredi reporter, to the scene, as English-language media ignored it.

Weiss found a cousin outside the severely damaged home. The cousin looked shell-shocked and had narrowly escaped being hit by the rocket himself; he talked about how kind his relatives were.

The anchorman, a secular Israeli, pressed Weiss to ask the cousin about the attacks on Jewish residents of Lod by Arab residents. Weiss looked uncomfortable, but asked the question, and the cousin did not want to comment.

A few minutes later, when the anchorman returned to Lod for an update, Weiss said something that I will never forget. He said that as a member of a group — Haredim — that had been frequently stereotyped, he wanted to object to the question he was asked to ask.

“This is a house of mourning,” he said, “and politics does not belong.”

That moment highlighted the complexity of contemporary Israel, where Haredi reporters are dispatched to Lod as riots spread. The coverage moved on to Israeli Arab lawyers talking about the lack of bomb shelters in Arab neighborhoods, and another policy analyst discussing that situation throughout all of Israel.

It’s all the more striking that a prominent New York Times columnist is openly taking the opposite stance to the views of Suleiman Maswadeh, an Arab journalist doing terrific and necessary work on Israeli public television. Maswadeh discussed his realization that Hebrew was essential in a fascinating interview with Haaretz; even as a college graduate, he understood that he needed Hebrew to fully participate in and understand Israeli society.

Maswadeh’s fluency in his native Arabic and his hard-won facility in Hebrew — and his harrowing reporting on his own neighbors in the Old City of Jerusalem, where he has lived all his life, publicly calling for the removal of families like his — make him far better placed to notice complexity than those who believe you need to know “just one thing.”

But the second aspect of Friedman’s editorial is the sad truth that the assertion that “you don’t need to understand Hebrew” isn’t about Israel; it’s about America. Unfortunately, American culture increasingly believes that the “one thing” you really need to know is yourself.

In creative writing classrooms, I have noticed that understanding of the self is not just therapy, it is art, and it is thought. The utter dominance of the “I” — the first-person perspective — in every genre from fiction and nonfiction to poetry would have shocked prior generations of writers and readers. Once third-person narratives were common; no more.

That “I” perspective has also come to dominate journalism and politics, and its rule is made possible by monolingualism. After all, when you speak a second language, you are forced to consider a second perspective.

Without that built-in second perspective, it’s easier to convince yourself that if you understand gentrification in East Harlem, then you can understand real estate in Jerusalem. Why would you need to understand Hebrew or Arabic?

Without that built-in second perspective, it’s easier to convince yourself that if you understand gentrification in East Harlem, then you can understand real estate in Jerusalem. Why would you need to understand Hebrew or Arabic? Why would you need to be able to read documents or historical archives, or think about the Ottoman Empire, or the British? After all, everything is related, and tied to you. Yes, you.

American monolingualism and self-obsession certainly makes it possible to think that Trump and Netanyahu are twins; and of course, the fact that Netanyahu is an English speaker who grew up in America makes it easy to focus on him, instead of what really matters, which are his voters, who do not necessarily speak fluent English.

To be fair, there are plenty of Israeli intellectuals who see parallels between the hold Netanyahu has on swaths of Israeli voters and the MAGA crowd. But at no point did the American religious right extend a hand to the Biden campaign, something Friedman does not note in his insistence that Israel’s new coalition is Bidenism.

Friedman is simplifying it all by going with the old saw that “the enemy of my enemy is my friend.” But more multilingualism would make it hard to make that argument, and call that situation simple.

To understand multicultural complexity, listen closely to Arab members of Knesset. And note that the status of three Bedouin villages in the Negev was part of the agreement that made the new coalition.

The Arab members of the Knesset are not a monolith, but they are all multilingual. When Ayman Odeh tweeted a quote from a Leah Goldberg poem, in Hebrew, and when he gave an all-Hebrew speech except for one line from the Koran — he showed that in today’s Israel, language matters.

So does honest acknowledgment of difference.

On Kan television, as riots flared, I listened to Arab activists working on coexistence say that what they wanted was hakara — acknowledgment. Of their history and of their pain.

Acknowledging that your story, or your version of history, is not exactly someone else’s is essential. In a world where superpowers are increasingly monolingual, and where major newspapers allow themselves to frame complexity as simplicity, what multilingual journalists like Maswadeh know is that listening to other people, in their native tongue, hard and painful as it is, may be the only way to build a shared future for all.

Aviya Kushner is the author of “WOLF LAMB BOMB” (Orison Books) and “The Grammar of God” (Spiegel & Grau). Follow her on Twitter @AviyaKushner