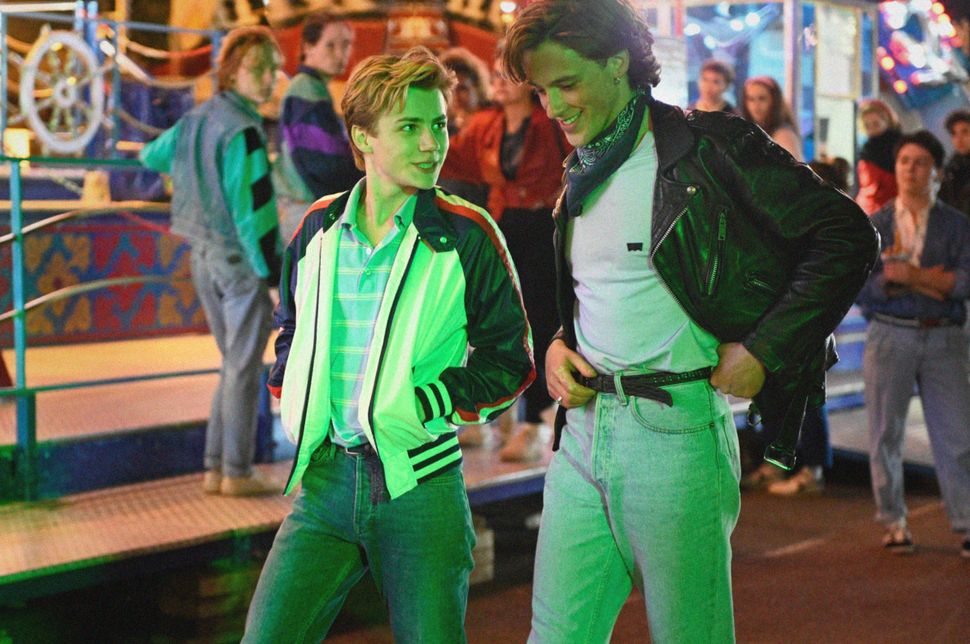 François Ozon’s “Summer of 85,” which hit the Jewish film festival circuit earlier this year, seems like a coup for any lineup: a sumptuous period piece that competed at Cannes and isn’t about the Holocaust should be opening night material. But what makes it Jewish?

The film, which comes to cinemas in New York and L.A. June 18, is certainly less Jewish than its nearest companion piece, “Call Me By Your Name,” another gay summer romance between a high school-aged kid and a slightly — but still unnervingly — older man. Going by the couple, it is at least half as Hebraic, with the younger man, Alex (Félix Lefebvre) a conspicuous gentile to the older David’s vague affiliation. In the early offing, the most notable traces of his Jewishness come from his creepy helicopter mom whose maternal rotors could whip up low tide on the coast of Normandy, where the film is shot in sun-dappled glory.

But if we trust Ozon, David Gorman, played by Benjamin Voisin with devil-may-care aplomb and a George Michael earring, is mainly Jewish for plot contrivance.

In a February interview, Ozon said that he made David Jewish to keep with the spirit of the film’s basis, Aidan Chambers’ 1982 young adult novel “Dance on My Grave,” which was set not in Normandy, but in the English town of Southend-on-Sea. There was also “a narrative reason, which has to do with Jewish post-mortem and funeral rituals,” Ozon added.

David, as the viewer gleans within the first few minutes courtesy of Alex’s narration, will die before our story ends. Because David needs to be buried quickly, Alex will have less time to grieve and process before he has to, as the novel’s title gives away, dance on his grave to fulfill an oath they made to each other.

“I like the fact that it is never an issue,” Ozon said of David’s Jewishness. “Just like being gay, it belongs to the narrative just like its other parts.”

To Ozon’s credit, it might not distract a typical viewer from the gauzy cinematography or the soaring use of Rod Stewart’s “Sailing” (here filling the place of Sufjan Stevens’ original songs for “Call Me By Your Name”). But maybe it should have been a bigger issue — at least when transported from the novel’s Jewish enclave to an area with scarcely any Jews and a complicated Jewish past.

Did David’s parents — we learn from a headstone that his father was born in the late 30s — live in Occupied France as children? Were they refugees from somewhere else? Could that experience shape how we perceive Madame Gorman, not as ghoulish, but as a woman with her own trauma and reasons for keeping David close.

It makes for an interesting subtext, but I don’t think it’s what Ozon intended. Elsewhere, he’s not big on nuance. “Summer of 85” begins with a capsized boat. (David rescues Alex.) It involves an almost farcical episode of Alex in drag. David monologues about chasing a “bubble” of speed on his motorcycle and, when David dies (guess how), an English au pair tells Alex that he just “loved the idea of David.”

If comparisons must be made to “Call Me By Your Name” — and despite a working class edge and an older source material, it’s so close in places that Ozon’s inviting them — even the premise of David and Alex’s intimacy is too on the nose. The trite pledge to dance on a grave versus the enigmatic pact to swap names bespeaks its larger issue with depth.

Taken on its own terms, “Summer of 85” is tidy in a way love seldom is, and a way Jewish identity never is.