A requiem for the backyard minyan 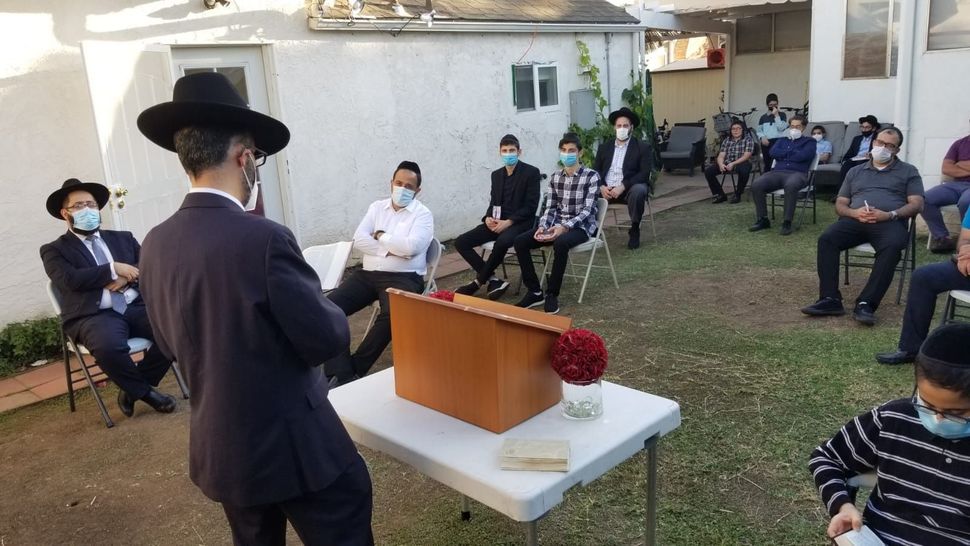 On the other side of the old wood fence in the rear of my parents’ Los Angeles backyard I could hear a young man reading from the Torah, and people reciting kaddish, and everything else that distinguished an authentic prayer service from the solitary ritual I’d grown accustomed to since the stores ran out of paper towels. I had never met the neighbors, I realized, as my father and I ducked under an apple tree to get within earshot with our prayer books. But for a Shabbat afternoon service on that waning summer day, we were congregants of their pandemic synagogue — a minyan in their backyard.

Shortly after the novel coronavirus made landfall in American Jewish communities in March 2020, synagogues across the country closed, first as a precaution and then under state and federal mandates. This posed a nigh-existential crisis for Orthodox Jews: without a quorum of 10 men, many of the prayer services’ defining features, the Torah reading and kaddish among them, cannot be performed. The desperate scramble for a 10th Jewish male — a common sight outside shuls in early evening, but also on flights to Israel or during Jewish community night at the ballpark — had become a community-wide state of mind.

“Have you ever gone for a sleepover at a friend’s house, and forgotten your toothbrush?” asked the neighbor, Nir Yacoby, who invited me into his home Sunday, a year or so later. (Neither of us were wearing masks.) “For us to not have a minyan is to have to go to sleep without brushing our teeth. It feels yucky.” 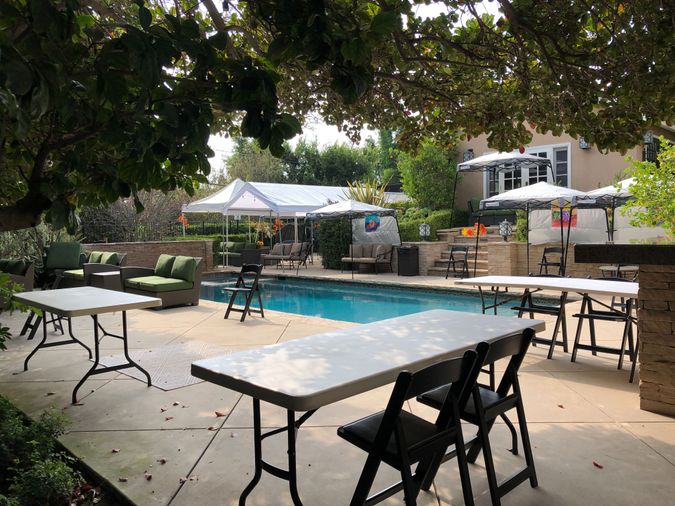 A backyard minyan for B’nai David-Judea Congregation members, situated men around Rich and Wendy Kellner’s swimming pool and women on the patio behind them. Courtesy of Wendy Kellner

So with houses of worship closed indefinitely, people took to the outdoors, first forming impromptu sidewalk prayer groups that were organized via word of mouth, in defiance of county health regulations and rabbinic instruction. (At first, most rabbis were forbidding even outdoor prayer gatherings, so as not to create an appearance of skirting the law.) But when the limits on group gatherings were loosened to 10 or more, synagogues began organizing services in their members’ backyards. There, for about nine months spanning from last summer until this spring, were countless sanctuaries under the sun.

Emerging in the face of a pandemic that has claimed the lives of at least 1,800 Jewish people around the world, the outdoor minyan became a symbol of Jewish resourcefulness and resilience, a holdover from easier times adapted to our tenuous new reality.

All Yacoby had to do to make his yard minyan-ready was drill a small hole in the roof of his garage so that he could hang a blue tarp overhead for shade. Other hosts went to greater lengths. Joe Stoltz, a member of Fairfax-area congregation Kehilas Yaakov, rented tents for his shul-affiliated backyard High Holiday services, which he said cost about $1,000. Michael Borkow, who hosted a minyan in Beverlywood for members of Knesset Israel, built a short wall to function as a mechitza. 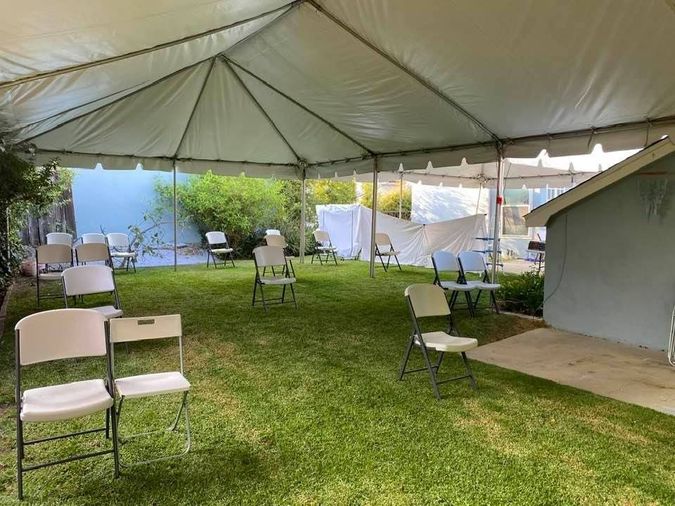 Then there was the matter of how to seat as many people as possible with sufficient space between them. A backyard Rosh Hashana service I attended at the home of Rich and Wendy Kellner was situated around a swimming pool. (No one fell in.)

“It was a math problem trying to set it up,” said Borkow, whose yard was able to accommodate up to 25, though he didn’t always get that many. “It made me feel as if my backyard was bigger than I thought it was.”

Even with a minyan, services were but a quirky, abridged approximation of the old ritual. There was no singing, no sermon, and no kiddush. No women (or almost none). No chatter. The Torah reading was a one-man marathon: instead of eight men called one at a time to bless the Torah, at most backyard services the ba’al korei (the person reading) would recite each blessing — and do the ceremonial lifting and wrapping of the scroll afterward. Still, the important things were there: not just Torah reading and kaddish, but common purpose and a sense of community.

For the lay congregants who found themselves thrust into the role of the shamash — the trusty caretaker who turns on the lights in the mornings and locks up in the evening — there were perks to the gig. A few said hosting the Sefer Torah around the clock was a high honor. For the Yacoby family, it felt like divine protection, too. 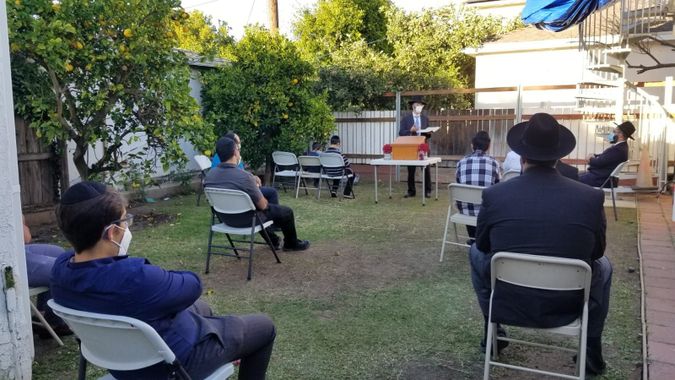 Nir Yacoby was one of many Los Angeles homeowners who hosted a regular minyan in their backyard during the coronavirus pandemic. On the other side of the wooden fence in the background, the author of this article could join the services from the backyard of his parents’ home. By Eyal Leghaie

When riots briefly swept Los Angeles last summer in the wake of Black Lives Matter protests, Adrian Yacoby, Nir’s wife, found herself ducking into their garage to draw spiritual comfort from the Torah scroll. “That was the biggest reassurance of my life,” she said.

On the matter of spiritual connection, the backyard could be a double-edged sword. Some liked being in nature (in Los Angeles, nature is a 10-foot hedge). But it could be hard to hear, especially over the occasional leaf blower next door. And even in a typically dry, sunny year, the elements posed a challenge on one or two occasions. Everyone I spoke to recalled the “one week it was really windy,” sometime in February.

Jeff Marcus, a member of Young Israel of Century City — “I couldn’t say no to my rabbi,” he said with a laugh — had about 15 popup tents in his backyard. (His biggest crowd was 54.) “One of the tents flipped over in the middle of davening,” Marcus said. “You look around and everyone is hugging a pole and davening. I’m like, this is what you do. So we literally stood there holding the tents and we got through davening.” 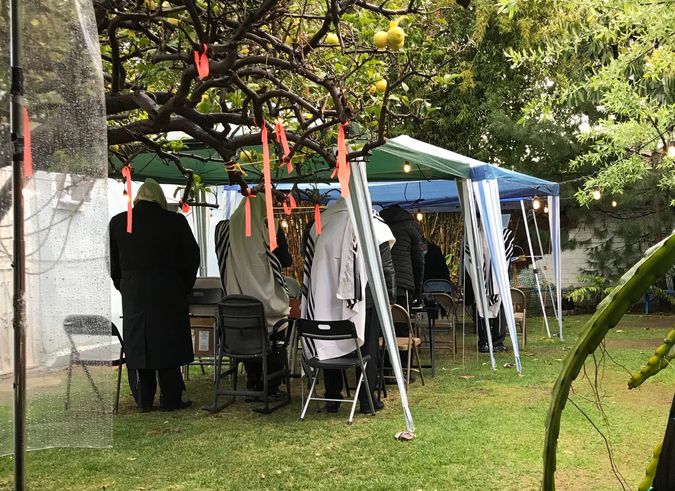 On one rainy day, social distancing was cast aside as minyangoers — still wearing masks — huddled under cabanas in Joe Stoltz’s backyard.

People also noticed a heightened resolve, an urgency to keep alive a tradition they had long taken for granted. Synagogues with membership in the hundreds were scraping to make 10 on some nights. But they almost always managed. Said Hugo Rose, who hosted a minyan partly so he could say kaddish for a late parent, “People felt more ownership. Everyone showed up on time.” Added Stoltz: “When you lose someone from a knee replacement, you feel it more.”

Three hosts I spoke to reported a COVID case among their minyan’s attendants — two shut down temporarily; Yacoby’s powered ahead. None experienced further spread.

Most Orthodox synagogues in Los Angeles were hosting indoor services by Shavuot — though some opened months earlier. There is joy in these openings, but losses too. For many, the walk to shul had become shorter. And the services were faster.

That convenience can be hard to part with. Yet conveniences we deeply missed (air conditioning!) and others we took for granted (bookshelves!) eased the transition.

As settled as they’d been in their backyard routine, I was surprised that the six hosts I spoke to shared an eagerness to leave it in the past. None wanted to go back to hosting — not for an occasional Kabbalat Shabbat, or a special Shabbaton, or anything of the sort.

“It was not like camp,” neighbor Nir said. “It was something that we did because we had to. It was hot, there’s mosquitos. Who wants that? It’s not fun. I didn’t take my guitar outside to sing along.”

That is the essence of it: people just missed shul. Rose, a former synagogue president of Beth Jacob Congregation, a Modern Orthodox synagogue in Beverly Hills, had tried to mimic the old Beth Jacob Shabbat experience in his yard. He put out salami and herring for kiddush and took sponsorships of the weekly l’chaim bottle. “It was fantastic,” he said, “but not enough.” 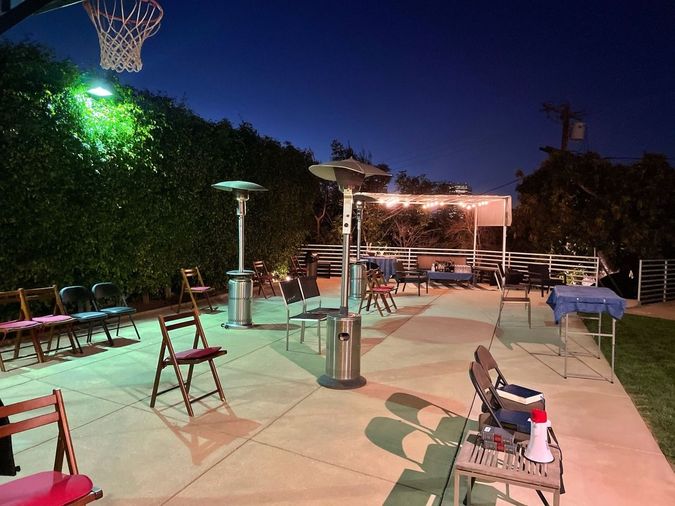 Noting that his minyan largely comprised friends he had made in shul, Rose said the social benefit of gathering was as important to community health as the prayer that produced it — even if schmoozing isn’t mandated by Jewish law.

“Let’s be honest: We go to shul not only to pray,” Rose said. “That organization, the culture that comes with it, you can’t replace.”

In any other time, the well-spaced folding chairs and services that might be described as “checks the box” would be undeniably bizarre. Even in COVID times, they seemed carnivalesque. But in any other time, you wouldn’t have had the impetus — indeed, the mitzvah — to make the outdoor minyans work.

Borkow said that when the rabbi came to collect the Torah from his house after their final Shabbat service, it felt like parting with a dear friend or close teacher. But three days later, he got a sign that the time was right: his neighbor gently asked how much longer the backdoor minyan would last.

“We would all choose to open back up,” Borkow said. “But it doesn’t mean the other wasn’t beautiful in its own way, too.”

A requiem for the backyard minyan