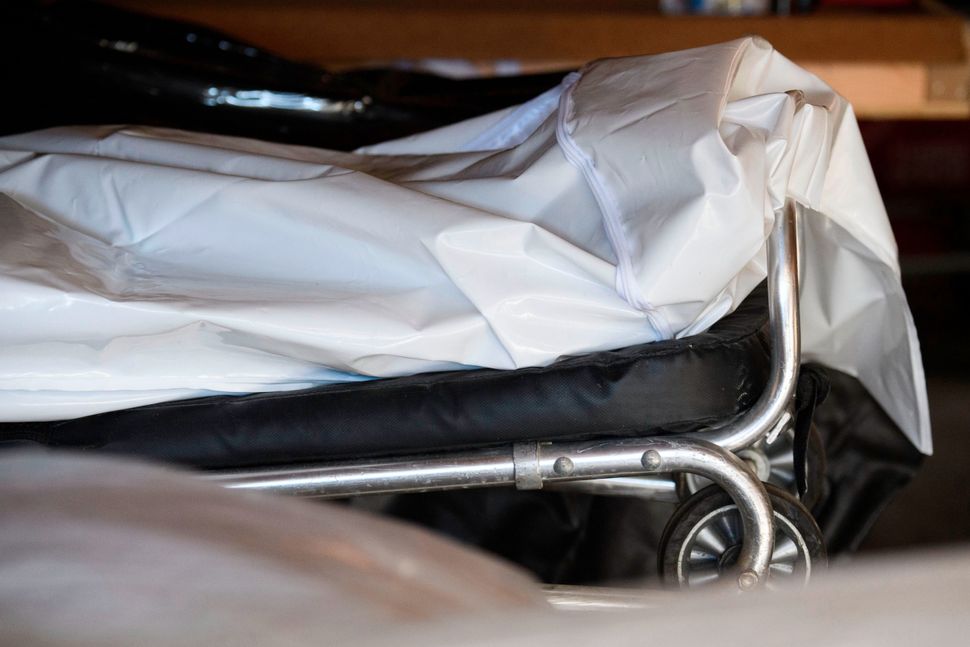 On one recent Saturday night, mortuary director Moe Goldsman got his first call at 10 p.m., his second at 12:30 a.m., and his third at 1:45 a.m. He worked through the night and went to sleep at dawn.

With coronavirus numbers skyrocketing in Southern California since Thanksgiving, Goldsman’s Sholom Mortuary is struggling to keep pace with the mounting death toll. The mortuary’s next availability is three weeks from now, and a cemetery across the street has paused scheduling new burials unless the family has prepaid arrangements.

A wait of several days to bury the deceased is nearly universal in Los Angeles right now, with some waiting weeks to bury their loved ones. Refrigerated storage units are in such high demand, Goldsman said, that the county coroner had called around at mortuaries looking for extra space.

The backlogged mortuaries underscore a grim new reality in the Los Angeles Jewish community: the virus that seemed to pass over it in the spring and summer months has begun to deliver major losses, even as other groups suffer far worse — so far.

Someone is dying of COVID-19 nearly every eight minutes in Los Angeles County, and the county surpassed its one millionth case Jan. 17. An employee of Hillside Memorial Park, one of three major Jewish cemeteries serving the Los Angeles area, said Jan. 16 that the next funeral availability was seven days away. The following day California surpassed New York as the state with the most deaths in the pandemic.

So bodies — and the broken families who cannot begin shiva until they bury them — have to wait.

Yossi Manela, director of Chevra Kadisha Mortuary, also in Los Angeles, said the earliest available burial date at one cemetery was Jan. 25 for a person who died Jan. 14. And the only option for that time slot was direct burial, meaning no family could be present.

Until now, the novel coronavirus had been unable to keep prayer services canceled or Jewish schools closed. But the scale of the ongoing tragedy has finally overwhelmed the professionals who snap into action when a Jewish person dies. And with funeral homes overwhelmed and cemeteries booked for days in advance, the pandemic is steamrolling Jewish burial traditions as sacred as they are age-old.

Next-day burial, the standard in Orthodox life, is now wishful thinking — even families who created a funeral trust years ago are waiting two to three days. “I’m lucky if we get five days out” for a funeral, Goldsman said. It used to take 24 hours to transport a body from Los Angeles to Israel for burial. That turnaround time has stretched to a week, due in part to a contracted flight schedule.

Sh’mira, the practice of watching over the deceased from the time of death until burial, can become cost-prohibitive, costing several hundred dollars a day at mortuaries that do not provide it to all customers. Some families are instead hiring a shomer, or guardian, for a shorter period leading up to the funeral.

Tahara, the ritual washing of the deceased that takes place after the body is physically cleaned, is among Judaism’s most hallowed practices. Sholom Mortuary is not the only funeral home that does not perform tahara on COVID-19 patients. “We don’t want to risk the lives of people to do the ritual preparation,” Goldsman said. (Chevra Kadisha offers a modified tahara using water mixed with bleach.)

That the body should decompose naturally in the soil is also particular to Jewish burial practices. But due to concerns of coronavirus spread, some mortuaries are placing the body in a plastic pouch before laying it in the casket, slowing decomposition.

After a steady stream of cases passed through Chevra Kadisha in the first nine months of the pandemic, the losses began overwhelming the mortuary in late December. Roughly half the cases Manela receives now are COVID-19 deaths. When he is informed of an incoming case, “I don’t even check,” he said. 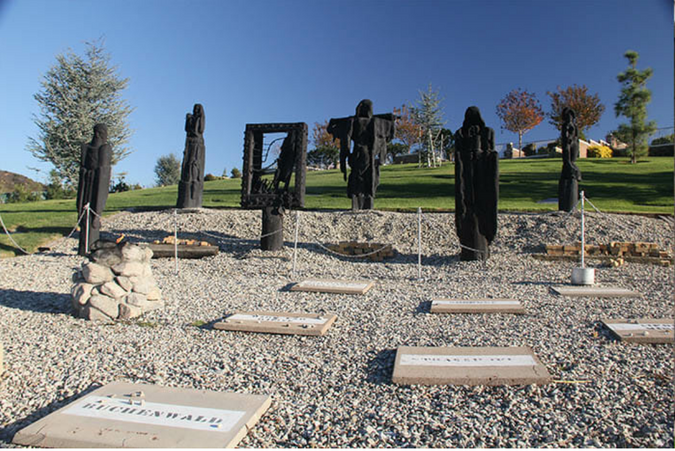 Howard Kaplan, general manager of Mount Sinai Memorial Parks and Mortuaries, said he had offered to share his facilities with other mortuaries, as Mount Sinai was not facing a backlog at the time. That’s not to say his staff hasn’t been busy: Between its cemeteries in the Hollywood Hills and Simi Valley, Mount Sinai is hosting as many as 15 funerals on Sundays. Kaplan estimated 35% were COVID-related.

Through the first two weeks of last January, Mount Sinai’s mortuary prepared 46 people for burial. It received 75 this year in the same period.

As ICUs in Southern California reached capacity in December, some hospitals set up tents in their parking lots to accommodate new patients. Now the mortuaries are receiving bodies faster than they can inter them.

Kaplan recently rented a 40-foot refrigeration unit to supplement the 35-footer he rented last March, which is full.

But the refrigeration units, too, are in high demand. Goldsman, the Sholom Mortuary director, said he is advising families to keep their deceased in the hospital morgue if possible.

He added that the backlog is even worse at the non-Jewish cemetery he shares an office with. Many of its clientele are Hispanic families, often low-income, whose loved ones have died of COVID-19. Some of them will wait two months for a burial.

Manela estimated that 120 people with COVID-19 on their death certificates had passed through his mortuary since the pandemic started, with an average age between 80 and 90. He did not have exact numbers on hand.

“Before, it would be busy for a day or two or three, then quiet,” Manela said. “Here, it doesn’t let up. It keeps going. Every day.”

But mortuaries are not the only bottleneck — cemeteries are also backed up.

Kaplan said the unrelenting flow of tragedy had beleaguered the Mount Sinai staff.

“We know the vast majority are elderly who are being affected by this,” he said. “And knowing how wonderful and valuable it is to have that generation to look to for culture, for wisdom. Children and grandchildren are going to miss out on some wonderful years with their parents and grandparents.”

The pandemic has also stripped funeral ceremonies to a bare minimum: always held at graveside, often held without eulogies or a minyan (quorum) in attendance, and sometimes over in as little as a half-hour.

Rabbi Kalman Topp, head rabbi of Beth Jacob Congregation, an Orthodox synagogue in Beverly Hills, recently officiated a funeral that had been delayed a few days.

He said the Jewish imperative to bury quickly goes back centuries and is intended to dignify the deceased and comfort the mourner.

“A delayed burial detracts from both of those efforts,” said Topp.

The rabbi added that the absence of tahara and the use of a plastic body pouch had been traumatic for one of his congregants who had buried a family member.

That preserving life overrides virtually every commandment was hardly a comfort.

“What I attempted to convey that placing the body in the pouch was an act of chesed,” or kindness, Topp said, “to protect the safety of others. A last, beautiful deed that will serve as a merit for the deceased.”