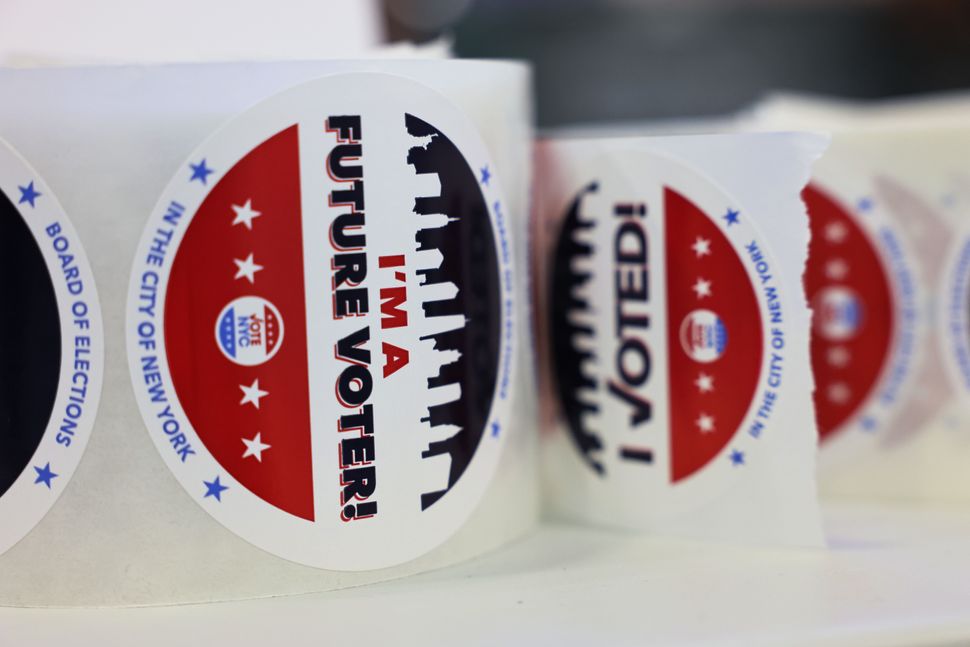 Beyond the usual candidate drama — including but not limited to issues of residency and alleged union-busting and sexual harassment allegations — the big story in this year’s New York City mayoral race is ranked choice voting.

For a people with 1.5 opinions per person, Jewish voters, unsurprisingly, have plenty to say. Many may appreciate the new system’s nod to natural ambivalence while fretting and kvetching about the mechanics. It’s not as simple as just picking your favorite person, it’s about weighing your relative choice, knowing your votes may well go to someone else lower on your list.

We wanted to see how ranked choice would work with the subjects New York Jews have the most vociferous views on: food, art, religion and, of course, New York City mayors.

The upshot is there can only be one winner. As a result, many things we love were cast away to the sad island of misfit runners-up. We ran a test election with Forward employees, family and friends. We all learned the art of compromise and will definitely go on to debate the results.

INACTIVE VOTES (THOSE WITHOUT A CHOICE IN THE FINAL LINEUP): 4.5%

In Round 1, Elaine Benes led by 36.4% with George and Frank Costanza tied for second at 18.2%. Kramer was in third with 13.6% and Jerry Seinfeld, J. Peterman and David Puddy were tied at fourth with 4.5% of voters putting them as their number one character.

With Round 2, Mickey Abbott, Newman and Jackie Chiles were eliminated for having no number one votes. David Puddy, was also axed, with his voter’s vote going to George. Elaine held the lead with 36.4% of the vote to George’s 22.7%.

In Round 3, Jerry was eliminated, giving George a bump to 27.3% of the vote. Round 4 saw the end of J. Peterman, the eccentric clothing catalogue icon, narrowing Elaine’s lead with George. In Round 5, George and Elaine were tied, with Kramer’s elimination adding points to George’s count as well as Frank Costanza’s place in third.

Elaine just edged George out in Round 6, with Frank Costanza’s voters’ support going to her, allowing her to little-kick her way to victory over George by a margin of 4.8%.

In Round 2, Isaac was eliminated, with his votes going, quite naturally, to his wife, Rebekah, putting her in fifth place above Leah. Sarah remained in the lead.

In the final round, Rachel was eliminated, her votes put Sarah over the top with 52.2% of the vote (did she laugh at this news, we wonder)? Jacob finished in second with 26.1% and Abraham in third with 21.7%.

INACTIVE VOTERS: 1 (which is why there was a tie even with an odd number of voters)

In Round 2, “Mad About You” was eliminated, its votes going to “Seinfeld,” adding 4 percentage points to its lead. Round 3 was The One Where “Friends” Lost, tying “The Nanny” for third with “Law & Order” at 16%.

In Round 4, Rhoda Morgenstern couldn’t hack it in her native New York. Those who preferred her had their votes split between “The Nanny” and “Law & Order,” keeping the two tied at 20%. “Mrs. Maisel” also picked up 4 percentage points, putting it at 28%. “Seinfeld” held steady at 32%.

Round 5 bid farewell to Fran Fine. With “The Nanny” eliminated, “Law & Order” nabbed four percentage points. “Mrs. Maisel” stayed marvelous, adding to her second place position with a healthy 36%. But “Seinfeld” was still leading at 40%.

And then came Round 6 “Law & Order” was eliminated. And “Seinfeld” and “Mrs. Maisel” tied! In an experiment that will almost certainly not happen in the actual election, both hit 50%. I guess we have a thing for standups. With our far smaller sample size, surprises can happen, and while markedly more unlikely than a tie in Tuesday’s election, in the event of a tie, I couldn’t find any clear guidance. Someone probably knows, but if they do, they’re not being forthcoming.

In Round 1, tradition won out, with “Fiddler on the Roof” coming very close to a win with 40.9% of voters choosing it as their top pick. “Guys and Dolls” was in second place at 22.7% and “Rent” and “Company” split third with 13.6% of the vote. “Falsettos” was in fourth place with 9.2% and Jason Robert Brown’s two-hander, “The Last 5 Years” received no number one votes.

“Falsettos” was eliminated in Round 2, with its votes going to the also-very Jewish “Fiddler on the Roof,” giving Tevye and Co. 50% of the votes.

“Fiddler” won in the third round, picking up the votes from “Company.” “Guys and Dolls” finished at a respectable second with 27.3% and “Rent” took third with 13.6%.

Predictably, this category was a food fight.

In Round 1 bagels started strong with 41.3% of the vote. Latkes came in second at 17.4%. Carbs were very popular, as babka placed third with 13%. Hummus and brisket tied for fourth with 8.7% of the vote and challah got 6.5%. Knishes and cholent got 2.2% and hamentaschen, sufganiyot and ghormeh sabzi were no one’s first choices.

Round 2 eliminated cholent — and its fans have to stew with that sad fact — but hummus surpassed brisket with the other shabbat favorite’s downfall, picking up 2.2 percentage points.

In Round 3 the knish lost its starchy footing, giving its points to challah and tying it for fifth place with challah at 8.7%. But it was not to last.

By Round 4, challah was toast. Bagels added to their already commanding lead, edging closer to the 50% threshold at 47.8%. Latkes also got a boost of 2.2 percentage points.

Brisket was bumped in Round 5, giving its points to latkes (21.7%) and making bagels the definitive winner at 54.3%. Babka was in third at 13% and hummus in fourth with 10.9% There are no holes in my math — people love a bagel.

The fight for New York’s best museum was a long, exhausting bout. Here’s the blow-by-blow.

In Round 1 the Met was first with 36.7%. 23.3% of voters picked the Museum of Natural History as their top choice. MoMA got 16.7% followed by the Tenement Museum at 10%. The Museum of the Moving Image, the Whitney, the Guggenheim and the Jewish Museum each got 3.3%. The Cloisters and The Intrepid were no one’s top pick.

In Round 2, the Whitney was eliminated, lifting MoMA to 20%. With the Jewish Museum’s elimination in Round 3, MoMA’s share reached 23.3% tying it for second with the Museum of Natural History. In Round 4, the Guggenheim was out of contention and ceded its votes to the Met, holding its lead at 40%.

The Museum of the Moving Image hit the cutting room floor in Round 5, goosing the Museum of Natural History to 26.7% in second place.

MoMA was out of luck in Round 7, giving the Museum of Natural History 7.9 percentage points. But it wasn’t enough to beat the Met, which won the majority with an impressive 62.1%

In Round 1, Passover was looking like a favorite with 46.4% of voters picking it as their favorite. Hanukkah came in second with 21.4% and the High Holidays were tied for third, with Rosh Hashanah and Yom Kippur each netting 10.7%. Purim was in fourth place with 7.1% and Sukkot was in fifth with 3.6%. No voters picked Shavuot or Tu B’Av as their favorite holiday.

In Round 2, the Feast of the Tabernacles was knocked off the ranking and its votes went to the feast of unleavened bread. Passover was close to victory at 50% of the vote. Salute Purim with groggers, cause it was eliminated in Round 3, its votes divvied up between Hanukkah (25%) and Rosh Hashanah (14.3%).

In Round 4, Passover crossed the Red Sea of the electorate and unto the safe shore of favorite Jewish holiday, finishing at 53.6%, but not before Rosh Hashanah picked up some love from Yom Kippur, finishing at third with 21.4%. Hanukkah was second with a quarter of the vote.

The voters answered with a resounding: “I’ll have what she’s having.”

In one round, “When Harry Met Sally” took 52.6% of the votes, with over half of those polled choosing it as their favorite. “West Side Story” came in second at 26.3% followed by “Annie Hall” and “Crossing Delancey,” tied at 10.5%.

The people have spoken. The little guy with the big hat, who was fluent in Yiddish and raised Episcopalian by his Jewish mother and Catholic father, won handily in one round. Fiorello La Guardia took 52.6% of voters’ first choice ranking. How’s Ed Koch doing? Pretty good with 26.3%. Mike Bloomberg was in third with 15.8% and Abe Beame finished last with 5.3%. Will we have another Jewish mayor this time in Scott Stringer? We’ll have to wait and see. (My guess is no.)