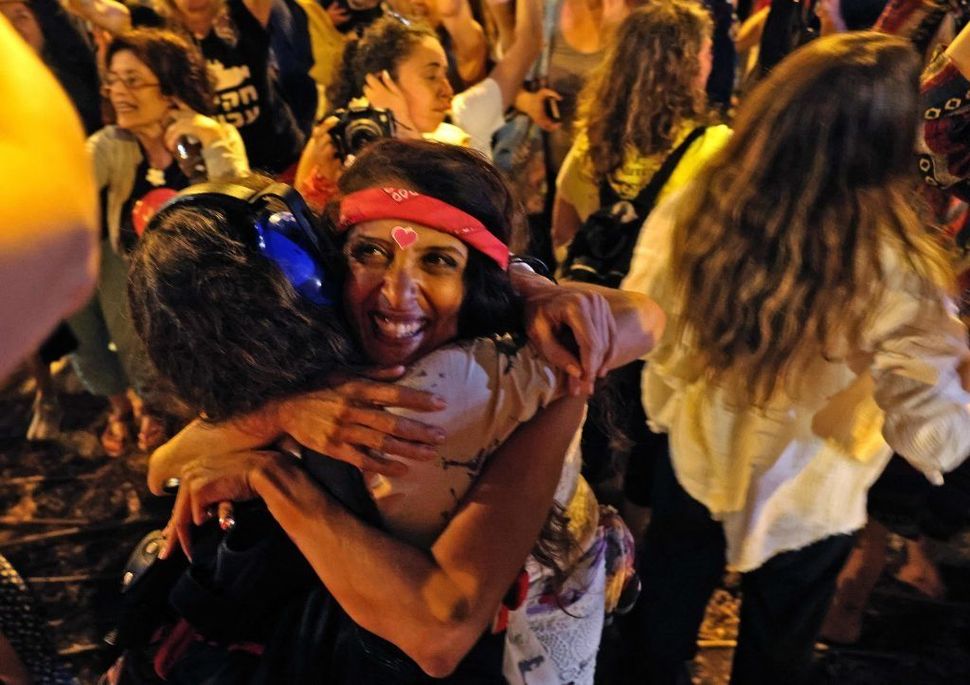 Two women hug at a celebration after Israel’s new government was formed. Courtesy of Getty Images

In Israel, #hotvaxxedsummer is already underway; all restrictions have been lifted, bars are packed and parties are sold out. Hookup culture has come back to life, and people are beyond grateful to be out of their houses, finally seeing their friends and meeting new people.

But not everyone actually stopped seeing people in the first place.

Of course, during the months of coronavirus restrictions, nearly everyone knows someone who bent the rules. I’m not talking about that. I’m talking about raves, overnight events involving drugs and music and camping — what is often known, in Israel, as a “nature party” — and parties in Tel Aviv mansions where people crammed into closets to hide from the police.

During the first lockdown, most of the country took virus precautions very seriously; people were limited to the area within 100 meters around their house, unable to travel even across the city, and nearly everyone obeyed.

Yoav Krak, a theater performer and juggler who is very involved in Israel’s Burning Man scene, said any gatherings that took place were “very hush-hush” and only had 20-30 attendees. “I got to be in one completely by accident,” he told me. “We were walking in the woods and just saw two speakers, and people dancing.”

But as the lockdowns went on, they became politicized; the less people trusted Prime Minister Bibi Netanyahu, the less they were willing to put their lives on hold.

“The people who were the worst, people who were breaking the laws for the virus were for sure the religious people,” said Ruti Zwick, a programmer in Tel Aviv. “But then on the left, I have a lot of hippie friends that also didn’t believe in the virus. I have friends who still haven’t been vaccinated and I decided to just stop talking to them about it because it just upsets me too much that they’re so stupid.”

“It’s so linked to the whole political situation here,” said Adi Hay who lives in Jerusalem. “At one point there was a shift. The first few lockdowns, people were all about social distancing and then it suddenly became about politics.” Once the conversation shifted, after the second lockdown, small parties began springing up in Jerusalem’s underground scene. 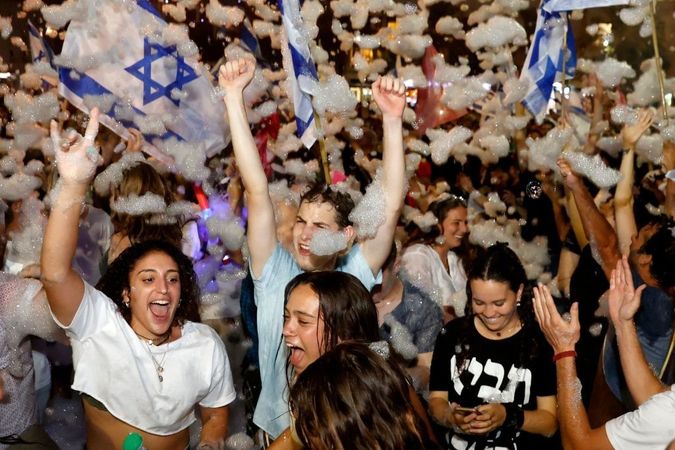 Revelers after Netanyahu was officially ousted from office. Courtesy of Getty Images

Matan Shvide, a student at Tel Aviv University, said he was never really in “COVID mode” in the first place, and called the whole thing a “hoax.”

“There was a virus,” he said, “but there wasn’t an epidemic.”

(Krak expressed similar doubts; “The general vibe is that corona was a joke, that we got punked,” he said.)

Shvide went to underground dances every weekend, where there were around 50 people each time — and he pointed out that the biggest gatherings he went to were outside the prime minister’s residence, where he trekked every single weekend to protest with at least 2000 people.

Distrust in the government actively fueled the party scene — word of the parties spread during protests. The parties were also advertised by word-of-mouth and secure messaging apps such as Signal and Telegram, where the location would be released only hours before. Sometimes, the location was never revealed — only a meeting point where a bus would pick attendees up and drop them at a secret location in a basement, to prevent the police from finding them.

Police try — and fail — to crack down

Occasionally, however, word got out a bit too widely and too many people showed up — once even causing a traffic jam at the entrance to a nature park where Krak was helping to organize an event.

“If the police come, you have to handle them on our own — there are no organizers,” said Krak. The attendees insisted over and over that they were just camping in the same place by happenstance and, despite the obvious lie, eventually the police gave up and left, unsure who to fine.

Other times, the nature parties went off without a hitch. Metzukei Dragot, an oasis on the edge of the Dead Sea, is a known spot among hippie types, some of whom camp there year-round. Just south of a checkpoint, the freshwater pools are nowhere near any town, and the police leave its management to the nearby soldiers, who don’t bother to regulate its activities. Krak said there were trance parties there every weekend.

But outdoor parties are less of a concern during the pandemic; it’s the indoor parties that can be the most contagious. They too raged on — particularly driven by the wealthy, who hosted events in Tel Aviv mansions. The people who went weren’t the ones Krak was used to seeing in the underground party scene, but people were desperate for the release of human interaction and dancing.

“In Tel Aviv, we found people with the right backyards, the right mansions, and just started partying there,” said Krak. “There’s a pool, Jacuzzi — it’s not something you see a lot in Israel. The people who held the party were just really really lonely I guess, and wanted to have friends again.” Everyone was instructed to carry a mask to put on in case the police came — but no one actually wore them.

Hay had to put the police contingency plan into action during an underground Purim party at a friend’s place — if there was a knock on the door, everyone would hide. “It actually happened and it was super-surreal,” said Hay. “The police came and half the party hid in the closet.” They were still fined.

Not all the gatherings were so secretive, however. A Tel Aviv gathering known as The Fit — as in fitness — used exercise as an excuse to party, since physical activity was allowed under the restrictions.

“People took bikes and rollerblades and scooters and did a moving party in Tel Aviv, like 500 people and a big boom box blasting,” said Krak. After the fourth or fifth week, the police showed up — but not to shut it down. Instead, they helped secure the party and protected it against traffic since it was, after all, technically legal.

Even those who ignored the lockdowns were changed by them. Now that things have reopened, and parties are actually legal, not everyone is excited to go out.

“I think at the end of the corona, people did a lot of drugs, and they’re a bit more timid with that, they cooled a lot down,” said Hay. “They just wanted to eat the world — to sniff the world if you can say it like that.” Now people feel less fear of missing out, and are only going to events they actually enjoy.

The Israelis who partied through the lockdowns are surprisingly critical of others’ enthusiasm to dive into #hotvaxxedsummer debauchery — perhaps because they are less desperate for human touch.

“People are trying to forget the last year and I’m like f**k, man, we’re all completely different, we can’t stay the same! It’s like shock therapy, we’re really all starting from something completely new,” said Krak. “I feel like the entire culture changed. You won’t know what kind of change you really got until 25 years from now.”

“I really hope we won’t tame ourselves back to what was the normal,” he added. “Because we already evolved.”