Tovah Feldshuh on ‘Becoming Dr. Ruth’ and the return of live theater 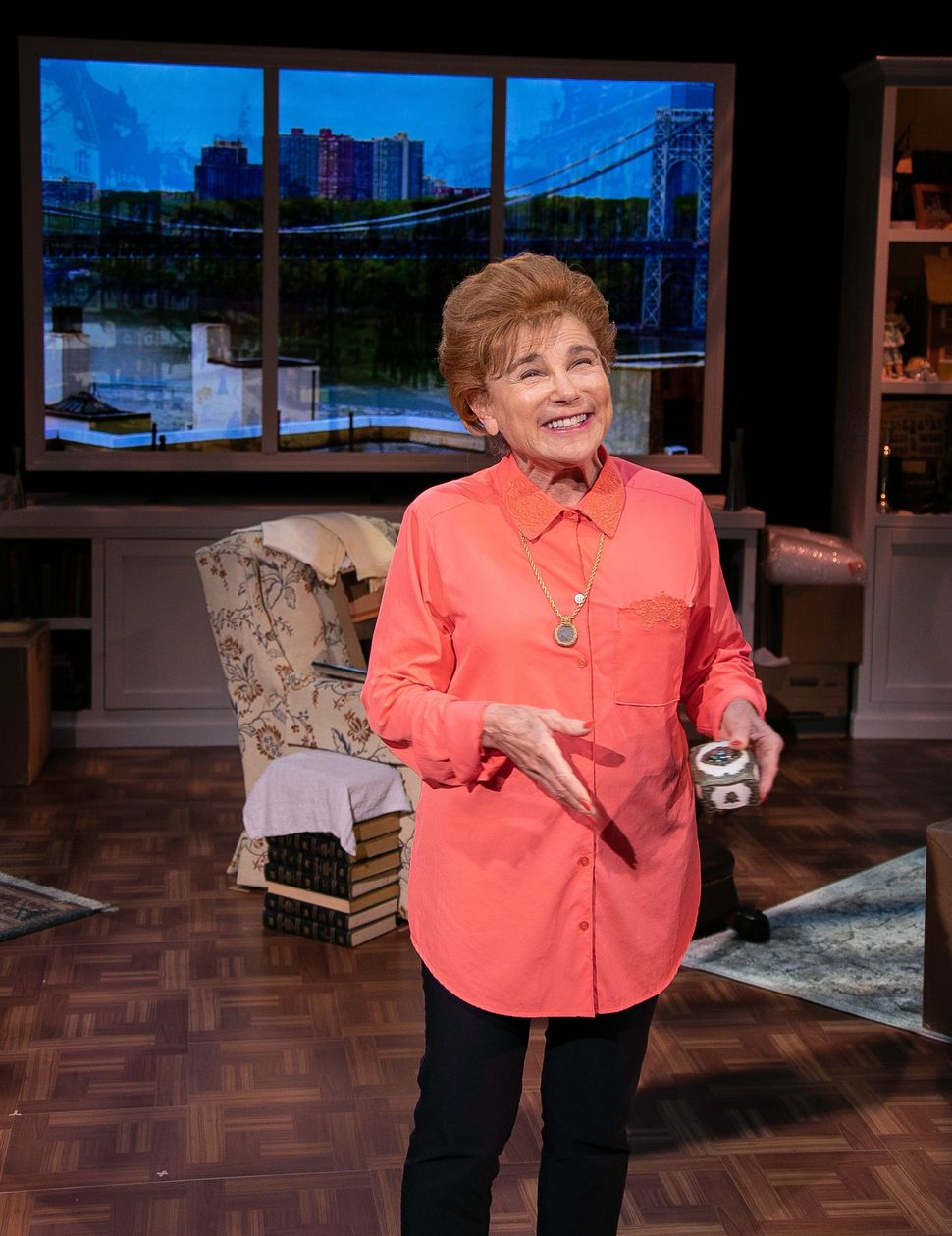 At the beginning of “Becoming Dr. Ruth,” Tovah Feldshuh shuffles onstage in an unmistakable blond-tufted wig. She circles the living room of an apartment cluttered with papers, moving boxes, Judaica, and turtle figurines, babbling instructions over the phone in a feverishly chipper, French and German-inflected accent. Then, she stops.

A wave of shock washes over her as she scans the audience. She hurriedly wraps up the phone call and shuffles back to center stage. Her face beams a smile as she welcomes her company with outstretched arms, saying “I’m so glad you’re here!”

Although the one-woman biographical play by Mark St. Germain was written years before the pandemic, its opening moments feel particularly prescient. Now playing at the Bay Street Theater in Sag Harbor, N.Y, “Becoming Dr. Ruth” finds an isolated Dr. Ruth K. Westheimer amid preparations to move out of her apartment after her husband’s death in 1997. While she packs photographs and books into boxes, she tells her life story to her company — the theater’s audience — whose presence she addresses with a mix of joy and awe.

“She’s so thrilled to be talking to other human beings,” Tovah Feldshuh said of her character in an interview with Forward.

When I saw the show last weekend, the feeling was mutual. As one of the first professional live theater productions since pandemic restrictions have begun to ease, “Becoming Dr. Ruth” feels as much like a welcome back to live theater as one into the protagonist’s apartment.

“It’s phenomenal,” Feldshuh said. “We’re all so ecstatic to gather around the campfire called a story well told, that the Greeks wrote about, which is theatre.”

Sitting among a masked, fully vaccinated audience scattered across 85 of the theater’s 300 seats, I couldn’t help but think of how simultaneously surreal and familiar it felt to be back in a theater. The last time I walked out of one, it was one of my last pre-pandemic weekends at college. I finished the final performance of a play I was in about a girls soccer team. Long after our friends and professors and parents had left, my castmates and I were blasting bubblegum pop and taking apart the set. As the last moments of February dwindled, I exited into the winter air and hadn’t been back since.

I’d forgotten how much I’d missed the rustling of other bodies, the paranoia following a pre-show cell phone announcement and the overheard lobby post-show review of “It would’ve been better if I had my hearing aids.” Most of all, I’d missed feeling the visceral, nanosecond shifts in emotion that a performer can really only transmit from feet away.

Though Covid precautions separate the production from a completely normal night at the theater, Feldshuh is choosing to be grateful, she said. “Is it harder to get a standing ovation? Yes. Is it harder for people to laugh when they’re isolated? Yes. Do they laugh? Yes. Do they stand? Yes, they do.”

A frequent theatergoer, Westheimer’s own first trip back to the theater was to see the play that tells her life story. “I’m not a theater critic,” she said, “But I think that Tovah is doing a super job.”

Feldshuh, whose 50-year acting career includes roles such as Ruth Bader Ginsberg and Golda Meir, is happy to emulate her character’s optimism. “I enjoy the play and doing the role so much because my attitude toward life is akin to Ruth’s. It’s just that Ruth’s positive mental attitude is on steroids all the time,” Feldshuh said. “She is probably the most relentlessly uplifted spirit I have ever met in my life.”

To demonstrate, Feldshuh slipped into Westheimer’s signature cadence, ending phrases with an emphatic rise in pitch. “She chooses to be uplifting. She chooses tikkun, to repair the world.”

‘I devote myself to transformational acting’ 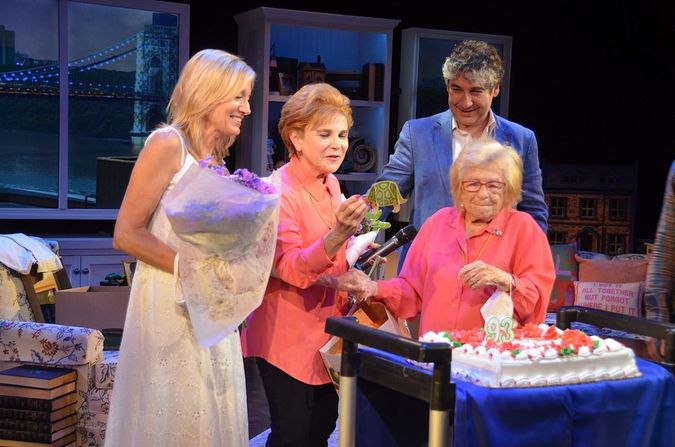 “Becoming Dr. Ruth” charts Westheimer’s journey from a ten-year-old Jewish girl in Nazi Germany who was sent to Switzerland to her career as an esteemed sex therapist in the United States. “Ruth is like a mitzvah machine,” Feldshuh said. “She is a person who is devoted to repairing the world because she survived and 1,500,000 children did not.”

Throughout Feldshuh’s performance, a deep sense of grief occasionally rises to the surface of the character’s sunniness. She reveals enough to let the audience not only glimpse Karola, the orphaned child inside Dr. Ruth, but recognize the way she chooses to spin good out of tragedy.

“You can’t rewrite history, but you can write your own story,” Feldshuh said. “She couldn’t rewrite the death of her grandmother, but she could write her life, and she wrote it with great will and determination.”

“I devote myself to transformational acting,” Feldshuh said. “That is, if I, Tovah Feldshuh, can play Peter Pan, think what you can do.” At another point in our interview, she announced, “I’m going to do Katharine Hepburn” and adopted a perfect mid-Atlantic drawl.

Feldshuh asked the theater to construct her costume based on the pictures she had taken of Westheimer. On opening night, without any coordination, Westheimer was wearing the same outfit, Feldshuh said.

For Westheimer, promoting the play is an act of remembrance, not egotism. “I feel strongly that this is like a gravestone to my family who do not have graves,” she said.

Westheimer calls Feldshuh nearly every day to tell her how honored she is and to offer to do as many talkbacks as possible, Feldshuh said. Both women hope that the play comes to New York City after it closes in Sag Harbor.

“I know that it will have an audience because people love this woman,” Feldshuh said.

“Becoming Dr. Ruth” plays at the Bay Street Theater until June 27. Remaining tickets are available at the box office.

A filmed production of an earlier version of the play is available through North Coast Repertory Theater until July 11. Tickets are available here.

Tovah Feldshuh on ‘Becoming Dr. Ruth’ and the return of live theater