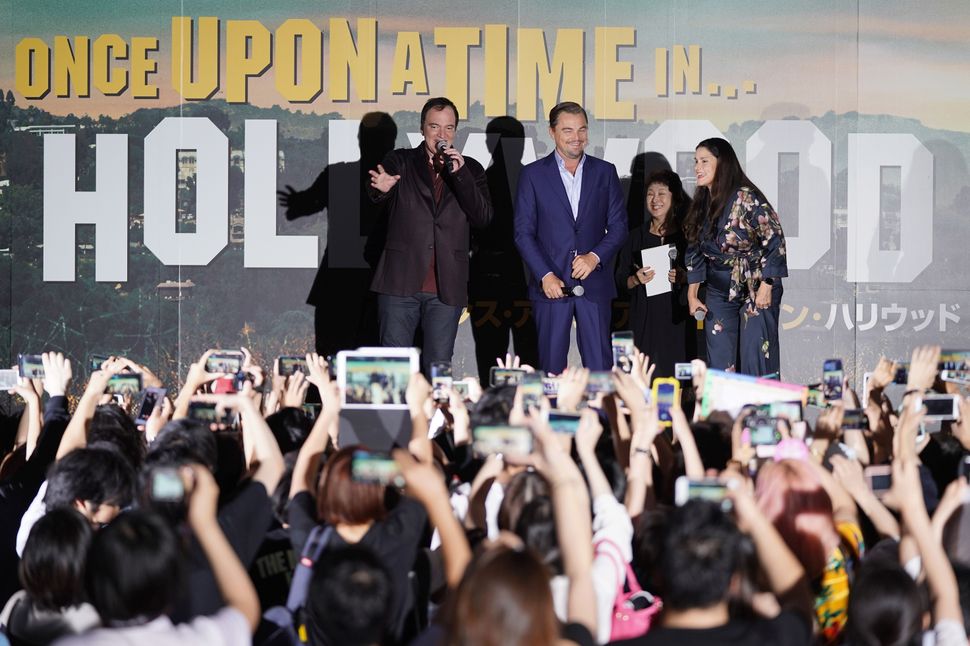 Quentin Tarantino changed film history with “Once Upon a Time in Hollywood.”

No, the film wasn’t a breakthrough work of cinema, rather, it literally rewrote the Tinseltown timeline by imagining an alternate ending to an epoch-defining tragedy. Two years later, Tarantino’s novelization of the 2019 movie — out now, complete with mass market-paperback packaging and price — mostly sticks to his original script, which followed fictional TV cowboy Rick Dalton and his stuntman-cum-chauffeur Cliff Booth’s travails in a changing industry.

Here, as in the film, the duo brutally dispatch the Manson Family members who, in reality, murdered the pregnant actress Sharon Tate at the home she shared with her husband director, Roman Polanski. (Dalton, in the book and film, lives next door.)

That climactic bloodbath is mentioned only in passing in the book, but its aftershocks are winked at throughout. The implication, as in the movie, is that the world changes in small ways. The country never learns about the Manson Family. Dalton becomes a “folkloric hero of Nixon’s ‘silent majority’” for torching hippies who broke into his house. Tarantino remakes a John Sayles picture with one of Dalton’s fictional costars.

And Polanski, we can safely assume, never rapes a 13-year-old girl when he’s 43. He never pleads guilty to unlawful sexual intercourse with a minor, and never flees the U.S. before he can be sentenced. Instead, we’re left to imagine him living happily ever after with Tate.

But while the book implicitly erases Polanski’s crime from history, it’s oddly preoccupied with imagined acts of statutory rape. And, alarmingly, it makes it seem like a colorful relic of the free-love past, not a serious violation of the humanity of its victims.

Nearly every male character in the book but Polanski — who is rendered as a harmless, short genius with an “elfin grin” whose talent for manipulating audiences Tarantino fawns over — appears to at least fantasize about a variation of his future felony. We’re told that record producer Terry Melcher kept Charles Manson around not for his musical talent, but because Melcher “loved f—-ing a fifteen-year-old dark-haired angel named Debra Jo Hillhouse.” Hillhouse, known in film and novel as “Pussycat,” is invented; Melcher, who is dead and therefore cannot sue for libel, isn’t. In one scene, the two have sex in Dennis Wilson’s billiard room while smoking pot and drinking beer. For those familiar with Polanski’s case, it’s a noteworthy sequence: The director was charged with, among other crimes, rape by use of drugs and furnishing a controlled substance to a minor.

When Pussycat hitches a ride with Booth to Spahn Ranch — where a 21-year-old Squeaky Fromme keeps the Mansons in good standing by having sex with 80-year-old George Spahn — she begins masturbating in the passenger seat to Tom Jones’ “What’s New Pussycat?” She asks Booth if he likes what he sees (“You bet”) and to digitally penetrate her. In Booth’s luridly-conveyed inner monologue, he imagines sex with her, but ultimately declines her offer. “I’m too old to go to jail for poontang,” he says. (A variation of this exchange is in the film, but prose enabled Tarantino to be much more graphic.)

But beyond Pussycat, the novel wastes a fair amount of ink on arguably inappropriate age gaps in sexual relationships.

There’s Fromme and Spahn, to start (this one really happened).

Tate is introduced during a hitchhiking trip from Texas to California; the man who picks her up does the mental math of a potential tryst after noticing her “two large bouncing boobs, and her long bare legs.”

“This young gal was probably no more than twenty-two, she fell outside the range of his morally approved parameters,” the driver thinks. “He had a rule to never engage in slap and tickle with anybody younger than his twenty-five year old daughter.” But, he has some flexibility, noting the “rule might be downgraded to a guideline if his passenger insisted.”

The sort of demeaning physical description used for Tate is more or less representative of how women in the book are presented, with the exception of 8-year-old Trudi Frazer, Dalton’s precocious costar on the western series “Lancer,” which incidentally starred convicted child molester James Stacy (you won’t learn about his no contest plea here, even though he appears as a character with quite a bit to say). But even Frazer doesn’t escape unscathed. The joke with her is that she’s surprisingly worldly and, in a silly turn, believes that her character might, in a hypothetical, marry Dalton’s. “This is western times,” she reasons. “People had child brides all the time back then.” Later, she calls Dalton late at night and they rehearse some dialogue that, given the played-for-laughs implicit nature of a post-midnight call, is icky in the extreme. Again: she’s 8.

Tarantino has suggested very young women and girls can be sexual beings in the past, with calamitous results. He did it while defending one of his cinematic idols: Polanski. In 2003, in an attempt to be “provocative” — his words, when he apologized — he told Howard Stern that the girl Polanski raped in 1977 “wanted to have it.”

Tarantino walked back these remarks 15 years later, not long after the #MeToo movement emerged. But Pussycat, a composite character based on real members of the Manson Family, most notably Ruth Ann Moorehouse, seems to act as stand-in for his initial image of the survivor of Polanski’s assault — a minor he sees as a willing and active participant in sex. Her sexuality, as a Manson follower and flower child, is treated as a sort of justification for the adult men who choose to pursue her.

To be clear, the Manson Family did have a lot of sex — they and their cohort once experienced a gonorrhea epidemic — but the constant emphasis on that fact, without acknowledging the abuse of its underage participants, is troubling. Add Tarantino’s regular descriptions of Pussycat’s feet, backside and even her “mountainous mound of dark pubic hair,” and you arrive at an author too busy being scandalous to suggest, or even notice, his character’s tragedy. (When Pussycat’s backstory — she was taken from her family by a cult leader at 14 — is related, Booth and Melcher both marvel over how Manson was able to ensnare such a “hot piece of ass.”)

Sure, the novel is skillfully pulpy, perfectly aping a sort of bygone prose that had no interest in ethics and existed purely to titillate. And while that’s diverting in its way, it’s hard to be nostalgic for that genre’s handling of sex with regard to girls and vulnerable women.

Not because things were worse for those groups then, but because they haven’t gotten much better.