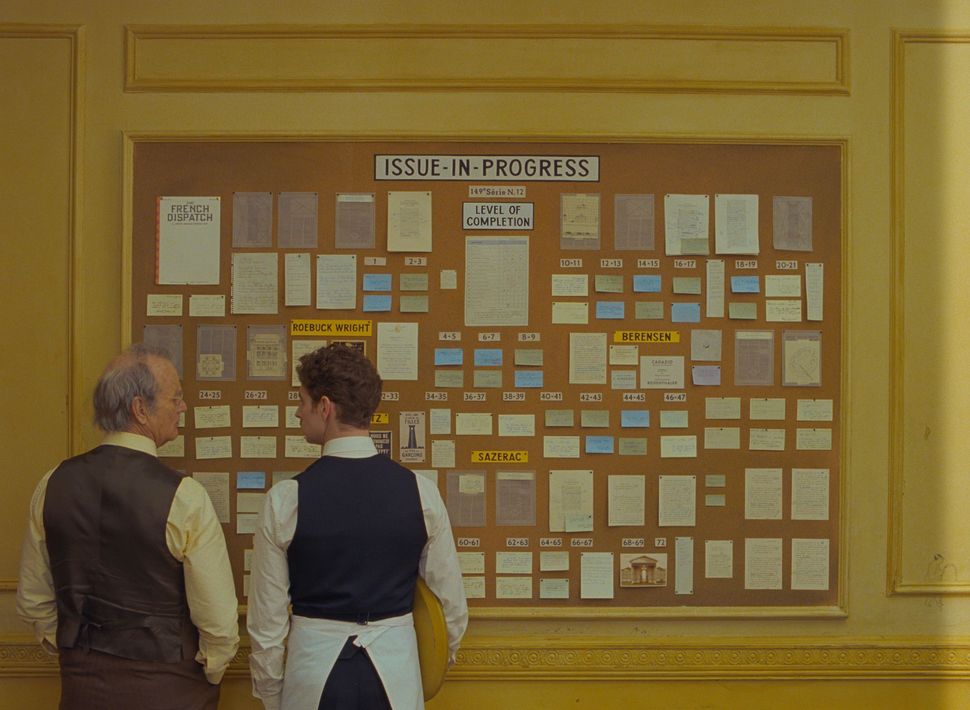 Up at the Old Magazine: “The French Dispatch” is centered around a fictional magazine and pays tribute to the heyday of the New Yorker. By Indian Paintbrush

This year’s Cannes Film Festival had its share of controversial titles, including a disturbing musical about a murderous comedian and a gorefest about a woman who has sex with cars and goes on killing sprees.

But no other film at the festival inspired such heated discussion and debate as Wes Anderson’s long-awaited “The French Dispatch.”

Over a year after it was announced as part of the official selection of the cancelled 2020 edition of the Cannes Film Festival, “The French Dispatch” landed with titanic force on the Croisette, and divided moviegoers immediately.

Those in the pro camp considered the film, a tender and fanciful valentine to The New Yorker magazine, a summation of Anderson’s finely honed aesthetic.

Those in the contra camp see it as a nigh unwatchable, ridiculous triumph of frippery and style over substance. (I’ve met a shocking number of people who said they didn’t make it past the first hour.)

One well-known Israeli journalist insisted on my reading the withering poem he wrote dismissing the film (in Hebrew) on Facebook. A filmmaker and academic railed against Anderson’s Andersonizing tendencies: the impeccably composed shots teeming with detail, the fussy formalism, the cutesy sensory overload and how it’s been adopted as a lifestyle brand by hipster brats in Greenwich Village and Greenpoint. “By this point,” he told me archly, “Anderson should just be designing boutique hotels.”

As for me, I make no bones about how much I adore “The French Dispatch.” 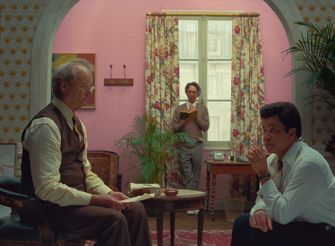 After becoming a Viennese-Jewish émigré director in The Grand Budapest Hotel Anderson has reinvented himself as a mid-century American expat intellectual, in the tradition of A.J. Liebling, Susan Sontag and James Baldwin. The new film, set in the offices of a literary magazine, is a wide-ranging, heady anthology of reportages from the fictional French city of Ennui-sur-Blasé (the exteriors were shot in Angoulême), the improbable base of operations for this equally improbable cultural supplement of the Liberty, Kansas Evening Sun.

Many of the writers Anderson drew inspiration from are enumerated in the closing credits. (A companion volume of articles that helped inspire the film, “An Editor’s Burial” will be published in the fall by Pushkin Press.) Yet, I also detected the influence of Tom Rachmann’s magnificent novel-in-stories, “The Imperfectionists” (2010) about a fictional version of the International Herald Tribune and its motley crew of American expat writers in Rome.

Anderson tips his chapeau to the most famous of all journalism films, “Citizen Kane,” by starting with the death of The French Dispatch’s founding editor. Arthur Howitzer Jr. (Bill Murray), is a composite of Harold Ross and William Shawn, the New Yorker’s legendary editors, with a dash of George Plimpton (the founder of The Paris Review) and The New York Review of Books’ Robert Silvers thrown in. Howitzer values the individual style and voices of his authors, but admonishes them, “Just try to make it sound like you wrote it that way on purpose.” He also has zero tolerance for people crying in his presence.

As the small staff gathers to jointly compose his obituary for what will be the magazine’s final issue, the periodical’s archives come to life in four narratively-knotty episodes that employ increasingly elaborate framing devices to translate the newsprint to celluloid. (Anderson shoots all his films on 35mm).

After a breezy and colorful “300-word” travelogue narrated by the boozily-named Herbsaint Sazerac (Owen Wilson, zipping around the city by bicycle, with a blue beret and a Leica) that introduces us to the seedier corners and cul-de-sacs of Ennui-sur-Blasé, we settle into the first of three madcap dispatches. 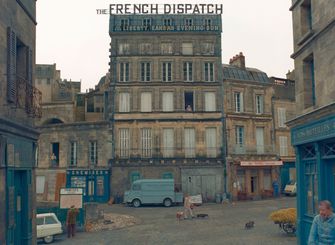 A View From Abroad: “The French Dispatch” is Anderson’s most formally inventive film to date, with shots that ricochet from black and white to color with changing aspect ratios. By Indian Paintbrush

“The Concrete Masterpiece” is a profile of a convicted murderer, Moses Rosenthaler (Benicio del Toro), the son of a Jewish Mexican horse trader, who becomes the toast of the avant garde art world after he turns to painting in prison. J. K. L. Berensen, an eccentric and erudite writer played by Tilda Swinton (the character is based on Rosamond Bernier, the subject of a 1977 Talk of the Town by Calvin Tomkins, who introduces his subject with the New Yorker’s signature urbane chumminess: “We are not alone in thinking Mme. Bernier the most stylish art talker around”).

Berensen is giving a lecture to an audience assembled at the Liberty, Kansas-based art collection that now houses Rosenthaler’s most important work, a multipaneled fresco on concrete prison walls that was airlifted out of Ennui-sur-Blasé. The work consists of abstract nudes of Rosenthaler’s prison guard, model and muse, Simone (Léa Seydoux who frequently strikes elaborately choreographed poses au naturel). The character of Rosenthaler (Grand Budapest’s Tony Revolori plays him as a young man) was inspired by Michel Simon’s gruff hobo in Jean Renoir’s “Boudu Saved from Drowning.” The episode’s other protagonist is Julien Cadazio (Adrian Brody), an unscrupulous “Levantine art dealer” who works alongside his uncles Nick (Bob Balaban) and Joe (Henry Winkler) and who is partially based on S.N. Behrman’s 1951 series of articles on the New York art dealer Lord Duveen, “the most spectacular art dealer of all time.”

The story allows Anderson to lovingly skewer the mysterious workings of the art market, as well as the French as self-appointed guardians of culture and taste with an unflappable belief in their own sophistication.

In the ensuing episode, he summons the revolutionary spirit of the ’68 student riots, or at least, the ultra-cool of the Nouvelle Vague. Jean Luc-Godard’s “Masculin Féminin” and “La Chinoise” are touchstones of “Revisions to a Manifesto,” by a Mavis Gallant-style journalist (Francis McDormand as Lucinda Krementz), who embeds herself (in more ways than one) in the student revolution and its wild-haired leader Zeffirelli (Timothée Chalamet as a stand-in for Daniel Cohn-Bendit).

Anderson favors a more layered narrative style for the final dispatch, where the Dispatch’s food writer Jeffrey Wright’s Roebuck Wright (a mash-up of A.J. Liebling and James Baldwin) appears on a talk show with Liev Schreiber and impresses him by reciting one of his articles, “The Private Dining Room of the Police Commissioner,” verbatim from memory. It’s a loopy culinary-kidnapping caper and features two more French acting greats, Matthieu Amalric and Hippolyte Girardot, who join the film’s massively international (and very Jewish) ensemble cast.

Brainy Jews run through Anderson’s oeuvre like a silver thread. From Max Fisher in “Rushmore” to the fractured Tenenbaum clan (a clear stand-in for Salinger’s Glass family) to the fin-de-siècle Vienna of Stefan Zweig in “Grand Budapest,” Anderson has a clear fascination with and understanding of the secular varieties of 20th century Jewish culture.

This is what sets him apart from Noah Baumbach (his sometime collaborator) and positions him closer to Whit Stillman, perhaps the WASPiest of all contemporary filmmakers. With “The French Dispatch,” Anderson delights in a pastiche of times and cultures, painting a vivid and idiosyncratic portrait of a legendary publication whose uniquely immersive and literary reportage is itself the result of an omnivorous approach to writing about the world, from food to travel to culture to politics. That the film opens with its founder’s death seems far from accidental; by now, the tradition of finely-honed, wide ranging reportage and criticism from leading writers and intellectuals is largely a thing of the past.

In press notes, production designer Adam Stockhausen talks about Angoulême having the sort of age and architecture that fit the film, and which made it at once unique and representative. He mentions the “twists and turns and stairways and little viaduct crossovers and all this really interesting and unique vertical stacking of interesting spaces” that the production team exploited in bringing Ennui-sur-Blasé to life.

The film team also enlisted local graphic artists (Angoulême is France’s comic book capital and the film’s team needed to schedule the shoot around the popular Festival de la Bande Dessinée to work on the Hergé-style animated sequences and artisans to make the pottery and the region’s traditional felt house slippers, Charentaises).

Ultimately, however, the “French” in “The French Dispatch” is something of a jest; like the film itself, it is very much an act of whimsy. Anderson and his co-writers, Roman Coppola, Hugo Guinness and Jason Schwartzman, pepper the script with knowing monikers and fanciful place names. (In addition to Ennui-sur-Blasé, there’s also a fictional crooner named Tip Top who has his own jukebox at the Cafe Le Sans Blague (the French expression means, “no joke.”))

Aside from journalism, the film’s true subject is the American view of Europe as a place of impossible refinement and elegance: an unattainable degree of sophistication that one can perhaps absorb through osmosis during a visit, a semester abroad or, at least, by buying a Shakespeare and Company tote bag.

“The French Dispatch” is Anderson’s most formally inventive film to date, with shots that ricochet from black and white to color with changing aspect ratios. There are also extravagant still-lifes (with actors and props elaborately frozen in place for quick panning shots) and hand-drawn animated sequences. In the past, I’ve often criticized Anderson for valuing style over substance.

If “The French Dispatch” feels like a breakthrough for the director, it’s because here, at last, the film’s style is its substance. For the first time, there’s nothing twee or precious about the director’s hyper-aestheticism. It is impossible not to be dazzled and enthralled by everything from the perfect-pitch performances to the impeccable comic timing to Stockhausen’s ingenious production design. Those who stay for the closing credits are also treated to a gallery of gorgeous full-color magazine covers, designed by Javi Aznarez. I’ve heard journalists object to the way Anderson uses his actors like pieces in a puzzle or figures on a chess board: to which I respond, step back and see the whole sumptuous tableau!

A.J. Goldmann is a Munich-based arts journalist and a longtime contributor to The Forward