In Lakewood, New Jersey, a garden blooms — and so does a community 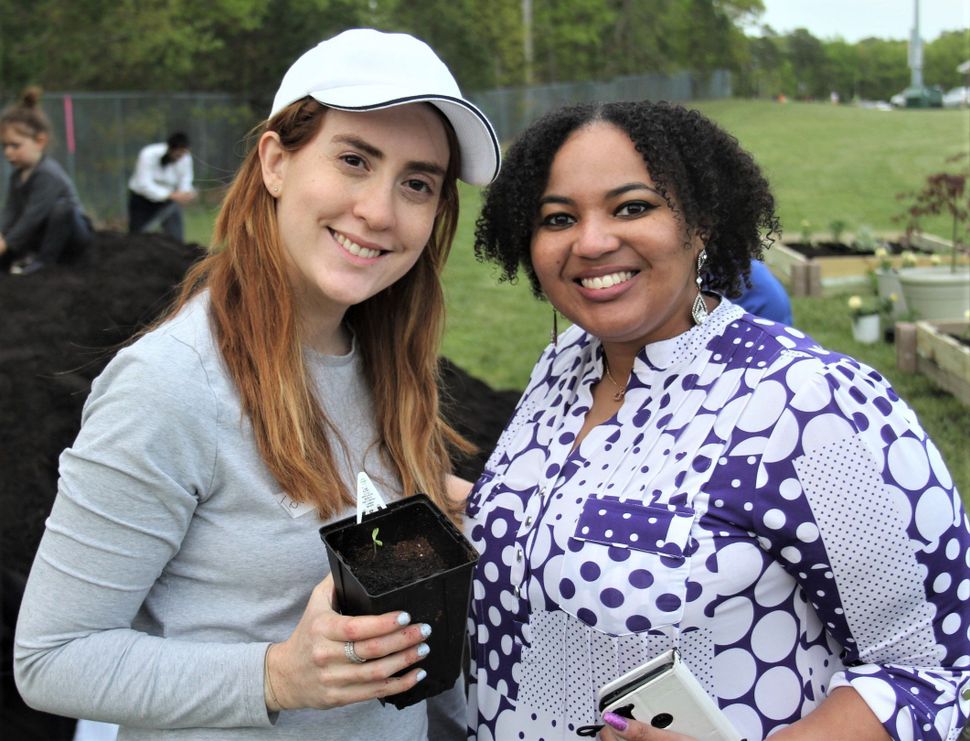 Wearing a broadbrimmed straw garden hat, Tova Herskovitz looked over the raised beds and smiled. The first carrot tops were poking through the chocolate-colored soil, the purple kale was already looking hearty, and so was the mint.

“Everybody should take some mint home with them,” she said.

As a longtime organizer, Herskovitz loves it when a plan comes together. And Common Grounds, a new community garden in Lakewood, New Jersey, may be her most fulfilling plan to date.

In the past, Herskovitz had used her nonprofit One Ocean County to bring people from area towns together through in-person events like a challah baking event she organized at a nearby Ramada Inn. But those were one-time events and any community building that occurred was temporary. And so Herskovitz decided she needed to create something sustainable.

“A community garden felt right since it would be safe, outdoors and easy to social distance,” Herskovitz, who is Orthodox, said. “A garden is about camaraderie and coming together over nature. The more interaction and engagement we have with others helps humanize everyone.”

As New Jersey’s fifth most populous municipality — coming behind Newark, Jersey City, Paterson and Elizabeth — Lakewood is home to about 106,000 people. It’s a diverse community of Orthodox Jewish, Black and Latino neighborhoods. 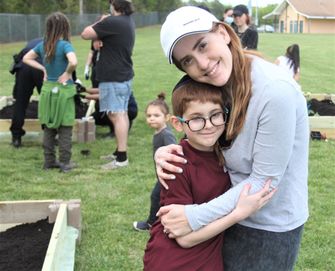 Herskovitz said the idea of community engagement became increasingly important not only because of the pandemic, but also because of escalating tensions after George Floyd’s murder, the Black Lives Matter protests, the 2020 presidential campaign and Jan. 6 insurrection.

“When I first put the idea on a Facebook page for community gardens, some of the first comments were ‘Lakewood? That’s a terrible idea,’ and ‘I would come to a garden, but no way if it is in Lakewood,’” Herskovitz said. “Whenever Lakewood is in the news it’s for a scandal. It’s for something that always taints the town and puts it in a negative light.”

In December 2020, a dead pig was left on the doorstep of a rabbi, and during the early months of the pandemic Orthodox Jews were blamed for spreading the virus. Thirty-eight of the 47 bias incidents reported in Lakewood in 2020, were classified as antisemitic, according to the Anti-Defamation League.

In addition to the anti-Semitism, there have also been instances of racism. In March 2021, a local NAACP chapter met with local Jewish leaders to discuss reports that some Orthodox Jewish children wore racist costumes during Purim, including blackface and Afro wigs.

“It put fire in my belly. I want to show that people can get together and learn from each other,” she said.

Mayor Raymond Coles, who pulled the garden’s first baby carrot in June, was an early supporter of Herskovitz’s plan. With little fanfare and less red tape, the town told Herskovitz the garden could have a 70- by 50- foot part of township-owned fields at the John Patrick Sports Complex as well access to town water at no charge. 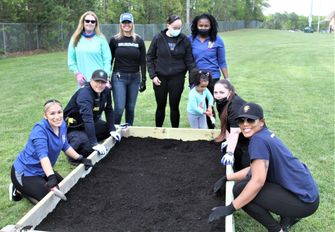 A Little Help From Their Neighbors: The Lakewood Police Department constructed the raised beds and irrigation system. By Colin Lewis

“I’m supportive of anything we can do to bring the communities together,” said Coles, who moved to Lakewood from Staten Island 34 years ago. “Lakewood has a lot of different races and religions and when you’re kneeling in the weeds you’re all at the same level.”

Herskovitz also launched a fundraising campaign to help pay for an irrigation system, raised beds and a fence. It brought in over $10,000 in a week, much of it from local businesses.

Soon after, the Lakewood police department got involved. They donated $250 to the garden, helped build the beds and on a recently fixed the irrigation system. Other organizations, like Rays of Hope in nearby Jackson, which works with Black youth, showed up in the early months to till the beds and plant the various vegetables and herbs.

Local residents, with and without gardening experience, also got involved.

Mendez started to daydream about starting a community garden after reading “Cultivate: A Grace-Filled Guide to Growing an Intentional Life.” So when she heard about the project from a friend she contacted Herskovitz. Now she goes every Tuesday with her daughter, also named Chantell. The 15-year-old hand painted rocks identifying the plants. 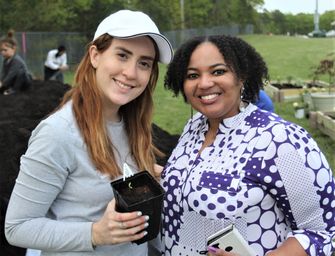 “I tell my daughter the garden is a journey, it’s not a fast thing,” Mendez said. “It’s growing, plucking, watering, and cultivating– the middle part is the part that people usually skip. They want to plant the seed and have the fruit right away. I do find the garden is a representation of life. The soil can be full of nutrients but it can also be very depleted. It takes a community for it to flourish and grow.”

Herskovitz said working in the garden has also given her a chance to consider Jewish texts in a new light.

“I’ve been thinking about the Book of Ruth and how it talks about the idea that the harvest should not be ‘picked to the corners.’ There is the idea of sharing of being sustainable,” Herskovitz said.

To that end, Herskovitz said she hopes to donate fruits and vegetables to area residents in need. In New Jersey, 774,869 people face food insecurity; of those, 52,900 reside in Ocean Country food insecurity, according to Feeding America.

Under muggy skies, a group of senior citizens gathered under a tent for one of the garden’s free organized events “Gardening At Any Age.” Sipping cold lemonade and water, nibbling on kosher vegetarian wraps and cookies, the women listened to representatives from Link Home Care, talk about how engaging in outdoor physical activities can benefit mind and body.

“When we reach a certain age it’s assumed we don’t look to learn new activities or make new friends. Having this garden gives people the opportunity to do just that,” Avi Friedman, a physical therapist and COO of Link, said.

Indeed, the opportunity to spend time with people outside one’s social circles is what drew Alyssa Pillco to Common Ground. That and Herskovitz’s vision for what “could be,” she said.

“I grew up in Point Pleasant but never really interacted with the Orthodox community. It’s only now that I have the chance,” said Alyssa Pillco, who described herself as a white Christian woman. “I’m learning about things like Shabbos and customs and traditions. Things are bound to come up, things might get uncomfortable when we ask each other questions, but we’re OK with awkward. We can step out of our comfort zones here.”

In Lakewood, New Jersey, a garden blooms — and so does a community