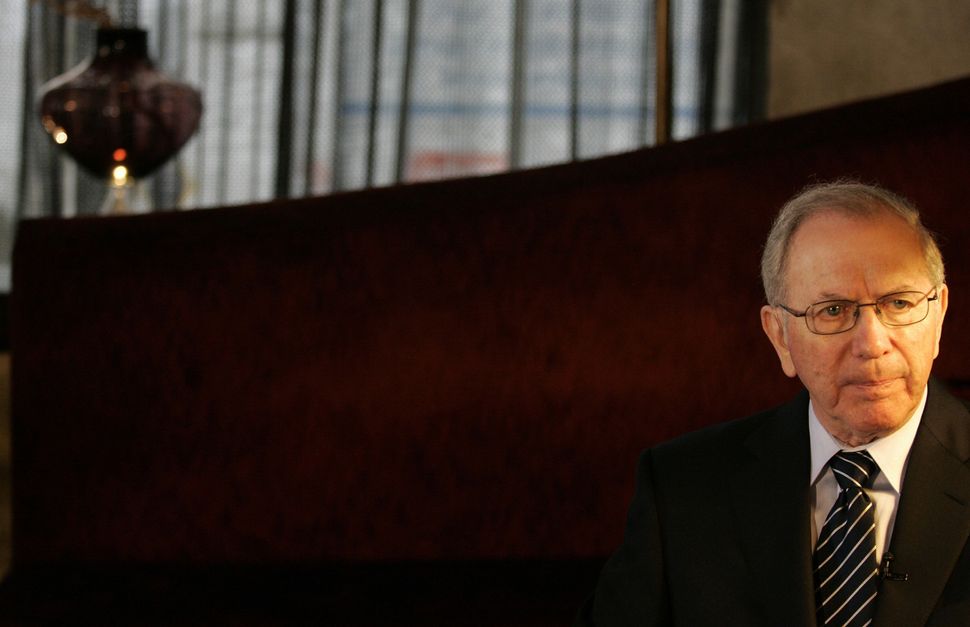 In a suburban Boston retirement community resides one of the most successful living Jewish American authors, the 94-year-old Noah Gordon. His book sales are over 25 million and his name is often mentioned in the same breath as Ken Follett’s. He’s a household name, just not in the United States.

Though his first novel, “The Rabbi,” spent 26 weeks on the New York Times bestseller list in 1965, he has never found the same audience at home as abroad.

The son of an immigrant pawnbroker, Gordon grew up in Worcester, Massachusetts during the Great Depression. His novels, page-turners that often deal with themes of Jewish identity and medical history, are staples of German airport bookshops, and commonly found on Spanish nightstands. He’s won praise from American critics and was awarded the 1993 Society of American Historians Prize for Historical Fiction. However, aside from his first novel, “The Rabbi,” which spent 26 weeks on the New York Times bestseller list in 1965, he has never found the same audience at home as abroad.

Gordon’s final book was “The Winemaker” in 2007. Despite the fact that the Spanish and German translations instantly topped bestseller lists, it took over four years for the book to hit American shelves. Even in retirement, the novelist has found new audiences. In 2013, a German movie version of his most popular book “The Physician” debuted. The saga follows Robert J. Cole, an 11th century British barber-surgeon who embarks on a treacherous journey to Persia in search of medical training unavailable in Europe. Unwelcome as a Christian in the Muslim World, Cole decides to pass as a Jew. In 2018, the epic, a reversal on converso Jews, opened as a musical in Madrid. After a successful run before COVID, the show is now preparing to tour Spanish cities. While Gordon remains big in Europe, the little attention he receives stateside is for being a publishing world enigma: the rare writer only famous in translation.

For Gordon, it’s no mystery. Like a character in one of his novels, a twist of fate set him on an international adventure. In 1986, Gordon published “The Physician,” his fourth book. The New England author’s two previous works had failed to match the success of his first. He promised his wife this would be his last attempt as a novelist. If it didn’t sell, he’d go back to newspaper job. The 765-page story took four years. The book pulls the reader in, offering the expected trappings of a journey into the East: veiled Persian seductresses and a violent and lustful swarthy Shah. What sets it apart is that Gordon meticulously researched the food, clothing and customs of the 11th century. Further, Gordon, who had previously worked as the former science reporter for the Boston Herald and a medical journal editor, dissected the world of medieval medicine.

He knew he had a masterpiece, but on his website, he explains, “there was bad luck in its American publication; my editor left at the worst possible moment.” The book was “orphaned,” he laments, with no one at Simon and Schuster, to champion it. When all seemed lost, it caught the eye of a German publisher, Karl H. Blessing, looking for new fiction for Droemer Knaur, a Munich based company. According to Gordon, “he made certain that every clerk in every bookstore in Germany received a reading copy.”

Blessing’s investment paid off, Gordon became an overnight success across Europe. While “The Physician” initial print run in the United States was 10,000 books, the German edition, “Der Medicus,” has sold over six million copies. At his peak in the 1990s, six of Gordon’s books simultaneously ranked on the German bestseller list. Still, his son and manager Michael Gordon, a Barcelona-based literary agent, says, “Spain is the country most in love with Noah.” According to Spanish author and bookstore owner Laura Riñón, “Most households in Spain have a copy of ‘The Physician.’ Even those who aren’t readers, read it.” 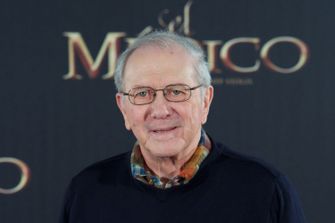 Is There a Medico in the House? Noah Gordon at the Spanish premiere of ‘The Physician.’ By Getty Images

Gordon’s outsized popularity in Europe may be a product of the books’ content, not their promotion. “There seems to have always been a very strong appreciation of historical novels in these countries, more so than in the United States,” says the younger Gordon. And while Gordon has been published in 38 countries, Spain and Germany, where he is most popular, are two countries that grapple with a history of antisemitism. While not all of Gordon’s eight books have Jewish themes, most do, and his Jewishness is well known, which may play a role in his popularity in these two countries.

The late 1980s, when Blessing spent a half-a-million dollars promoting “The Physician,” came shortly after the 40th anniversary of German’s defeat in WWII. Beginning in the 1960s, a younger generation of Germans’ began contemplating their country’s past crimes. By the 1980s, it was at a fever pitch.

“It seemed as though the whole country had come down with a bout of philosemitism,” writes Yascha Mounk author of “Stranger In My Own Country,” a memoir about growing up Jewish in Germany. 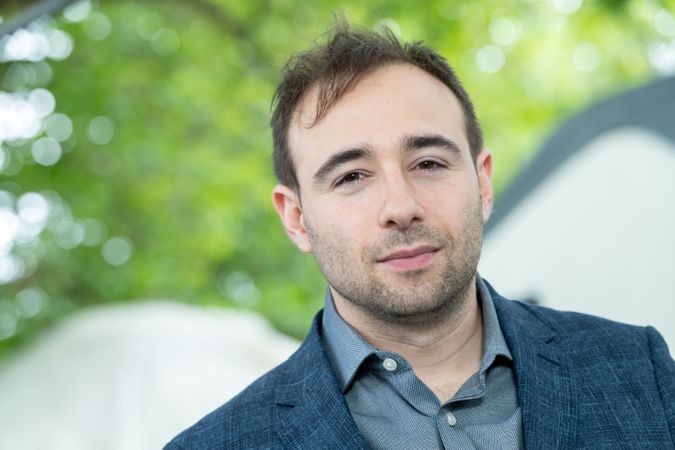 Everything Old Is Jewish Again: Author Yascha Mounk says that Europe has seen “a guilt-ridden renaissance of every last aspect of Jewish culture.” By Getty Images

“All things Jewish suddenly became fashionable,” recalls Mounk, a professor at Johns Hopkins. With only 30,000 Jews in the country, Germans took it upon themselves to create what Mounk refers to as “a guilt-ridden renaissance of every last aspect of Jewish culture.”

When “The Physician” reached Spain, the audience was also ready. According to Ilan Stavans, an Amherst professor who studies Jewish and Hispanic culture, the young democracy had found renewed interest in its Jewish history as the 500th anniversary of the Inquisition approached.

I didn’t know any Jews,” Blanca Rosa Roca, Gordon’s Spanish publisher, remembers. “What I knew about Jews came from the Bible because I went to a school run by nuns.”

Gordon’s books were eye-opening. “The Physician” and “The Last Jew” explain Judaism in easy-to-read plot-driven texts.

“It is very attractive to an audience that doesn’t fully understand what la juderia, the Jews and the Jewish culture are all about,” says Stavans.

Gordon claims he never tried to cater to any audience. Nor does he see himself as an ambassador of Jews, or as a historian. He sees himself as a storyteller, and wrote about what he found most engaging. Perhaps it was by chance that his first novel, “The Rabbi,” appealed to American readers.

‘I knew about Jewish families. I wanted to write about belonging and what it meant to be an American.’

“I knew about Jewish families,” says Gordon. His first novel draws on his experience growing up in a tight-knit Jewish enclave. “I wanted to write about belonging and what it meant to be an American.”

Gordon’s book is not unlike the writings of Philip Roth, Saul Bellow and Bernard Malamud, other children of Jewish immigrants who wrote popular books in the 1960s. Unsurprisingly, Spanish and German audiences were less interested in the Yiddishisms and pre-packaged kugel of mid-century Jewish America. Their appetite was for Gordon’s later works of historical fiction; in particular, books about their own European history.

For Mounk and Stavans, the philosemitism of klezmer-playing Bavarians and challah-baking Catalans, may be well-intentioned, but is problematic. Mounk describes feeling alienated as a Jew in Germany, and argues that the German obsession of Jews feeds into feelings of resentment.

For Stavans, Spanish fascination with Sephardism is “somewhat misconstrued” and limited to stereotypes. It is a longing for a part of their own lost history more than a real interest in Jews. This, he believes, is the reason for Gordon’s popularity in Spain, but he credits the Jewish-American writer for filling a gap in education. In 2014, he argued in an essay in the Forward, that Gordon’s “The Last Jew,” although “fluffy in style,” is a better treatment of Jews during the Inquisition than the writing of serious Spanish authors.

“Apparently, no Spaniard, no matter how talented, is ready to discuss the issue head-on,” Stavans wrote.

Still, Stavans laments that Spanish interest in Jews is backward-looking.

“It does not evolve into a full-fledged understanding of the Jewish condition in the 20th or 21st century,” he said in an interview.

Still, there is potential for Europeans to learn about contemporary Jews. A decade ago my future-wife brought me to her home in northern Spain. I was the first Jew her parents ever met and I had a large cultural gap to bridge. For most older Spaniards, their knowledge of Jews comes from Franco-era parochial schools, and bestsellers like Gordon’s. Then, on their bookshelf next to the Ken Follet and J.R.R. Tolkien novels, I saw “The Rabbi.” Most likely what drew them to Gordon’s books were the adventures of mysterious Jews of the Middle Ages, but I was comforted to see Gordon’s first novel. Its main character is just like me, a Jewish graduate of Bronx High School of Science, who goes on to marry a non-Jew. Whether he has meant to or not, Gordon has become a Jewish American ambassador.