A young man, an old man and the secrets of clamming 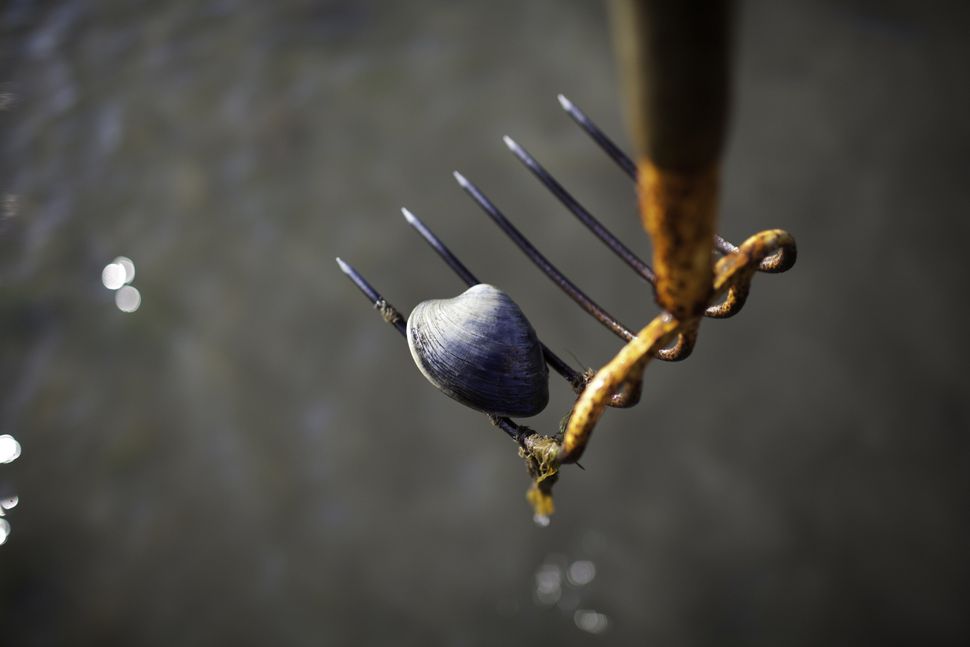 Sammy held the dark, odd-shaped, deep brown clump of stuff in his hand, showed it to me and said, ”Grandpa, is this doo-doo?”

Sammy and I had a few things in common. We were both a little mischievous and had a good sense of humor.
It was a beautiful day and we walked that seven-minute stretch from the house to the beach, the Peconic Bay and an adjacent estuary, home to some of the most pristine little necks and top necks in the area. Once there, we set out on the short trail that led to the bending tree, then a turn to the left and down to the water’s edge. It was about three hours from low tide (the optimal time for clamming) and the land immediately before the water’s edge was soft and muddy.

Sammy, holding a small hand rake at his side, followed my steps into the water to avoid any surprises. The water was clean and clear and reflected the sun’s rays. Its surface was calm, beautiful and inviting. The bed was sandy, muddy in spots, firm and about four inches deep.

“OK Sammy, let’s get to it,” I said. I put the tines of my rake in the water, the top of the rake on my right shoulder and proceeded to walk backwards; dragging my rake through the water in search of that scrape against the shell of what I hoped would be a top neck clam.

“I think I feel one over here, Sammy. Dig here.”

Sammy started digging, excited over what he hoped to find. Unfortunately that first dig resulted in the “doo-doo” incident.

Sammy kept digging with great resolve and then he felt it, that wonderful scraping, scratching sound that says, “Here I am.” He stuck his other hand in the mud and retrieved the clam.

After Sammy’s success, thrilled that he got his first clam, we continued scratching and digging until all my pockets were full. “Well, Sammy, I think we have enough clams for supper” I said, as we put the clams in two plastic bags I had brought along. Then Sammy and I, each holding a bag of clams, walked to the beach and showed everyone the results of our good work.

Sammy was beaming. He looked up at me with his shy, “you’re gonna love this, Grandpa” kind of look and said, “You know what happened today Grandpa? Today, a young boy and an old man went clamming.”

It was unusual for me to wake up at 6 a.m. I love sleep and sleep is never far away when it’s dark, my eyes are closed, and my mind is clear of thought. This time I just couldn’t fall back asleep. I tried to calm myself by thinking about the day before, when I was out, clamming in the same estuary where Sammy and I had been a few weeks earlier. It was hot, maybe in the high 90s. Still, I yielded to the mysterious call of the clams.

No other clammers were in the water: I was alone, with only my rake and a few plastic bags to accompany me. After clamming for about a half hour, I had retrieved one lone clam and the intense heat was beginning to take its toll on me. I thought of calling it a day, going home to an ice cold Heineken, but then I remembered the time when I went clamming with Sammy. It was hot then, too, and Sammy solved the heat problem by walking in deeper so that only his head was not wrapped with the coolness of the water. Smart boy, I thought as I proceeded to go deeper into the water until only my head was exposed to the heat. Then I immersed my head in the water as well. I was rejuvenated by the coolness. Pretty smart, that Sammy, I thought, until I realized that I was the one who had told him how to cool off.

The take was very meager, only about six clams. I thought of the embarrassment that might result should I exit the water and possibly run into someone who wanted to know how many clams were in today’s take. I recalled how Sammy urged me on that day we were clamming together. I should do it for him, I thought. He would be so proud of me if I continued and retrieved more clams; at least a respectable dozen! It was getting hotter, so I walked out to the deeper water.

The longer I stayed, the better I felt. Finally I felt ready to do some serious clamming. So, a little clamming, a little dunking; a little clamming, a little dunking. Before I knew it I had my dozen and wended my way toward shore. The bay bed was very muddy in spots and some steps put me knee deep in mud. “But that’s where the clams are, Grandpa,” Sammy would say, I thought, and continued clamming as I walked toward the shore. I picked up an additional half dozen from the deep mud on my way out. I had taught Sammy well. He knows where the clams are.

I walked to the nearby beach with my almost two dozen clams, unashamed. The beach was empty. A grey mist had settled over the Peconic. The heat was stifling. I went into the water to cool off, and then I took the 10-minute walk back to the air-conditioned house, put the clams in the fridge, sat down on the couch and immediately fell asleep. I dreamed about Sammy.

Sammy attended North Shore High School in Long Beach, N.Y., and The North Shore Hebrew Academy in Great Neck, N.Y. He was graduated in 2018 from Binghamton University, where he studied integrative neuroscience. He is currently pursuing a Masters Degree in Public Health at Johns Hopkins University.

Still, on an occasional warm, sunny day, you may find the two of us digging for clams at our special spot in the Great Peconic Bay.

Len Berk is the Forward’s lox columnist. On Thursdays, you may find him behind the counter at Zabar’s where he’s worked for 26 years.

A young man, an old man and the secrets of clamming