I fought the scallop laws — and I won 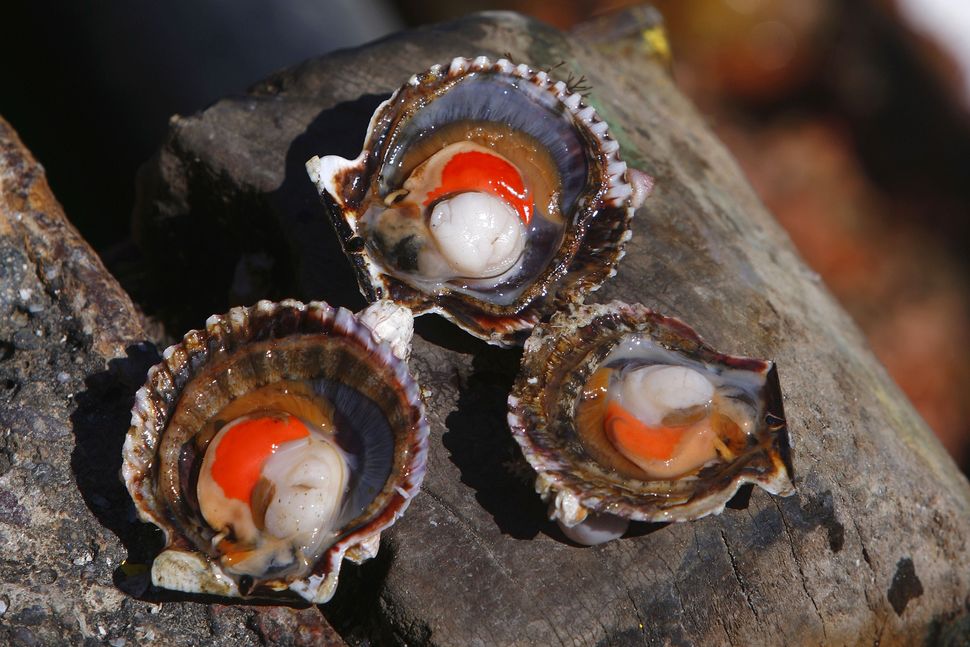 The first Monday in November is the first day of the year that you can legally retrieve bay scallops from the waters of Long Island. On that day, bay scallop hunters put on their boots or their waders, in search of what some people think are the most succulent, sweetest, nuttiest and delicate bay scallops in the world; the bay scallops of the Great Peconic Bay.

For years I had eaten “Peconic Bay Scallops“ from Cor-J fish market in Hampton Bays. I would taste those tender, relatively tiny raw morsels, right out of the shell, while buying them at the fish market; I couldn’t wait to get them into the sauté pan at home.

And so it was, on that first Monday in November, in the year 1984, that my son Michael and I set out for our first scallop harvest. Mike had come all the way from Oneonta, New York, where he was attending college at the time, for this gala event.

Until that day I had been only a “clammer.” From April through September, for many years, I would put on my waders or bathing trunks, enter the waters of the Peconic or Shinnecock bays to go “clamming.” One could go clamming all year round, but scalloping was allowed only from November 1st through March 31st of most years; and this was going to be our first year retrieving scallops.

I went out to my house in Hampton Bays early the night before so that I wouldn’t have to make that 90-minute drive in the morning. We wanted to get into the water very early to beat the other scallopers on this first day of the season. We entered the water at one of our favorite spots at about 5:00 am. It was dark. Sunrise was at 6:22 that morning. Since I’d never gone scalloping before, I had done some research to learn about how it was done.

Unlike clams that reside in a very small area for most of their lives, scallops move around a lot. Sometimes they hang out in grassy shallow water, where you can reach down and pick them up with your hand, and then they turn up in much deeper water where alternative methods of harvesting are required. A “look box” is a homemade box with a glass bottom. Once the bottom is immersed in the water you can look through it and see the scallops dancing around in the grass below, some repeatedly being jet propelled by the repeated clapping of their shells. It’s like looking through a snorkel mask without getting your face wet. What you see is almost like ballet; scallops dart from one place to another, shells opening and closing.

Retrieving scallops is not a highly skilled operation. You really don’t have to know very much to be a scalloper. We decided to use our clamming skills to deal with the scallops. Since scallops love to dance around in grass bottoms, we used our rakes to feel around for grass. It took a while and we finally found some grassy spots. Suddenly, I felt movement in the basket of my rake. I lifted my rake out of the water, and there they were, two scallops, dancing around in the basket. Another first in my life; I love firsts.

We were now initiated into the world of scalloping and it was fun. We dragged our rakes through the grass and retrieved more scallops. It was still dark when we saw what appeared to be a flashlight moving along the water’s edge. It was getting closer and closer to where we were and then we heard a voice call out, “Come out of the water.”

We had no idea who it was so we ignored the voice and continued scalloping. Moments later we heard the voice again” “I am the Bay Constable, come out of the water immediately.” We worked our way out of the water with our catch, and on to the beach where we came face to face with the Bay Constable. He informed us that scallop season didn’t start until sunrise and that we were about an hour too early.

He confiscated our scallops, and issued each of us a summons that required us to appear in the Southampton courthouse at a specific future date. To say the least, Mike and I were a bit distressed. We were only a few hours early and we hadn’t been aware of the “Sunrise” rule. So we waited there for about three quarters of an hour until the sun rose when we went back into the water and continued our search. About three hours later we exited the bay with a very healthy catch.

Back at the house we washed the scallop shells to get rid of all the sand, mud and other clinging debris and got ready to remove the meat of the scallop from the shell. It was exciting to even contemplate the process before we started, but start we did.

First, we pried open the scallop shell and severed the hinge of the adductor muscle (the part we eat) with a shucking knife. At that point, we were able to remove the top shell. Then we slid the knife under the scallop meat to release the entire inside of the scallop from the shell. We separated the meat from the guts, which we discarded, leaving us with only the scallop meat. We washed them thoroughly, ate a few raw, (they tasted like candy) and put the rest into the refrigerator.

That evening we quickly pan-fried some of them for dinner in a bit of butter, getting each morsel golden brown, top and bottom, plated them, a little lemon on top and indulged. I cannot find the words to explain how delicious they were. Some of the remaining scallops were refrigerated for consumption during the next few days; we froze the balance for later pleasures.

Now, we had to marshal our forces to take on the Town of Southampton, where we were required to make appearances to answer the charges against us for the alleged pre-season scallop harvesting. Michael went back to college in Oneonta and I did some research related to the matter at hand and planned a strategy for dealing with the judge.

When the day arrived, Michael drove back home, and we proceeded to Southampton to comply with the provisions of our subpoena. We entered the courthouse where we were greeted by the town attorney who advised us as to the procedures for our trial. In cases like this (we didn’t come with an attorney) the town attorney listens to the position taken by the defendant and gives advice as to how to present the case before the judge. He advised that we plead guilty with an explanation, since he felt that we in fact did violate the law. Armed with his advice and our preparation, I faced the judge after the clerk announced my case to the court. It went something like this.

The Town of Southampton vs. Leonard Berk for violation of the law that requires scallops not be removed from the local waters out of season. How do you plead? “Guilty with an explanation, Your Honor,” I said She (by the way her name was Judge BERKE and I thought that might be a helpful coincidence since my name was the same as hers, though spelled differently) asked for my explanation and I proceeded.

“Your honor, I own a house in Hampton Bays, that I purchased many years ago, where my family and I spend long weekends during the warmer part of the year. We partake of all the opportunities available to us as “so called” weekenders; swimming, dining out, fishing, sunning and more. I am a clammer and have been clamming in the local waters for years. I love clamming. I noticed in a recent addition of the Southampton Press that the scallop season started on the first Monday in November and I decided to give it a try. I was very excited about going scalloping and as opening day came closer and closer, I couldn’t wait to get in the water. So on that day, we entered the water at about 5:00 am. We wanted to beat the crowd. Your Honor, nowhere in the article in the Southampton Press did it say anything about sunrise. All it said was that the Scallop season started on the first Monday in November, and this was that day. Your Honor, I may have unknowingly violated the letter of the law, but what about the spirit of the law? Surely, I didn’t violate that!”

Judge Berke looked down at me from her bench and said “I AM DISMISSING THIS CASE IN THE INTEREST OF JUSTICE, NEXT CASE!”

The next case was that of my son Michael. He explained to Judge Burke that he just followed the lead of his father because he knew that his dad would never, knowingly do anything illegal. The judge looked down at him and with a controlled smile she spoke the words we wanted to hear:

“CASE DISMISSED IN THE INTEREST OF JUSTICE.”

A year later, in the summer of 1985, a mysterious brown tide appeared in the bays of the Hampton area. It was deadly to scallop life, since it slowed down the scallops’ feeding apparatus, and they starved to death. The scallops disappeared. For several years thereafter there were but few of them in the bay waters. In recent years harvests have been erratic at best; some good years, some bad, but nothing like the good old days. However, I do experience one particular good old day, quite often, the first Monday in November, 1984, the day that my son and I each received a summons for scalloping out of season. Those summonses are framed and hang on the wall over the fireplace in our Hampton Bays summer house. I see them every time I sit on the couch there, and when I see them, I smile.

Len Berk is the Forward’s lox columnist. He worked behind the counter at Zabar’s for 26 years..

I fought the scallop laws — and I won