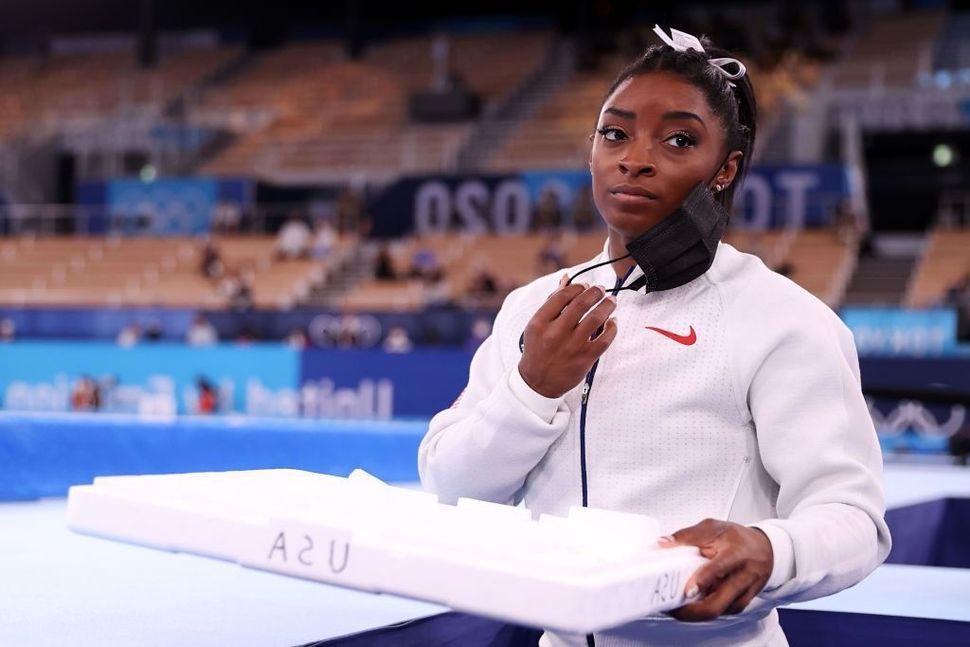 Simone Biles at the Tokyo Olympics Photo by Getty Images

As the rhinestones on her leotards declare, Simone Biles is the G.O.A.T. — the greatest gymnast of all time. Her record-breaking flips and twists have won her 30 gold, silver and bronze medals over her years competing at the Olympics and World Championships.

So when she pulled out of the Olympic women’s team gymnastics final on Tuesday, citing mental health, NBC commentators, receiving the news live, were at a loss for words. (Biles also subsequently withdrew from the women’s individual all-around competition, in which her teammate Sunisa Lee took home gold on Thursday.) Internet talking heads like Piers Morgan have called her “weak” and a “quitter,” saying she should have pushed through.

In doing so, many recalled and praised athletes who did push through injury to win for their team — and particularly the Jewish gymnast Kerri Strug, who performed a vault during the team competition in the 1996 Atlanta Olympics on a badly injured ankle, and stuck the landing before collapsing to all fours. Strug needed to be carried off the mat and, later, onto the podium when the team won the gold. She’d expressed trepidation before the event, asking her coach, Béla Károlyi, “Do we need this?” The answer, it turned out after the fact, was no: The team would have won gold even without the points Strug earned with the vault.

Strug’s choice had major repercussions, exacerbating her injury and causing her to withdraw from the 1996 all-around and all individual events — and, ultimately, ending her career at age 18. She was hailed as heroic at the time, but in 2021, particularly in light of Biles’ choice to withdraw, Strug’s injured vault looks more like an illustration of the dangerous pressures and impossible expectations to which elite athletes in all sports are subjected, and of how little say many have in their own health and performance.

At the highest levels, athletic life always involves sacrifice. Strug has spoken, for instance, about having to choose between Hebrew school and the gym. But sacrificing physical and mental health, as many pundits demanded Biles choose to — and as Strug was pushed to do — is a different choice than missing Hebrew school. 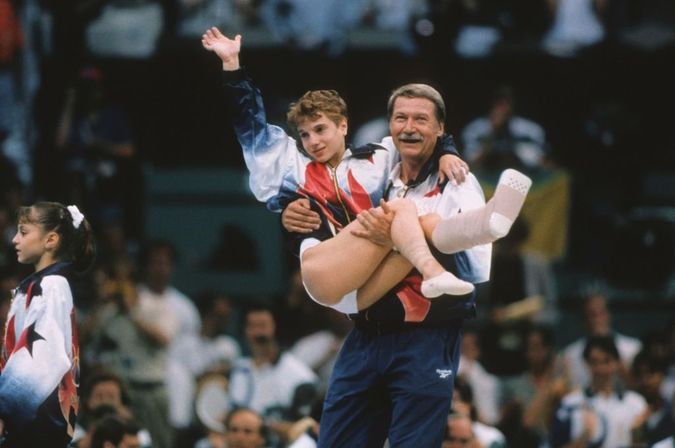 Kerri Strug, injured after her vault, being carried by coach Bela Karolyi to the podium to receive her gold medal. Photo by Getty Images

It’s dismaying that, 25 years after Strug sacrificed her career for a vault her team turned out not to need, so many are heralding that action as emblematic of national pride, not asking what kind of national pride demands that athletes permanently sacrifice their health for the nationalistic glory of their home countries.

Biles has been outspoken about her efforts to create systemic change in gymnastics, a sport that has long been rife with abuse, from the sexual predations of Larry Nassar to coaches who yell and shame their athletes. The issue she experienced on the floor — “the twisties,” in which gymnasts or divers abruptly lose the muscle memory required to orient themselves in the air — can lead to disastrous landings or falls, which can spell paralysis, or worse. Being honest about that danger, and prioritizing her own physical and mental health in the midst of one of the most visible competitions in the world, is another bold step toward change.

It’s in keeping with improvements that she has spent years advocating for, and will perhaps help pave the way for athletes in all sports to have the agency to make the best choices for themselves — an agency that Strug never had.

As for Strug, she tweeted out her support for Biles after her decision. And her teammate Dominique Moceanu, who also continued to perform through a dangerous injury in the ‘96 games, implied that she wished she’d had the ability to make a similar choice in defense of her own health.

Besides, as Strug pointed out, the U.S. team still won silver — no small accomplishment.