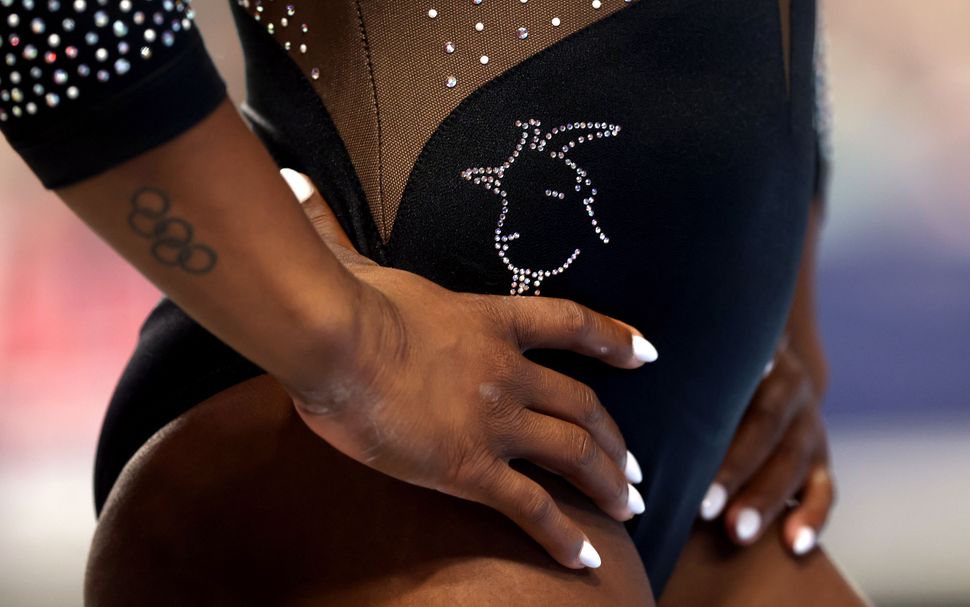 Simone Biles’ leotard, featuring a bedazzled goat, a nod to her status as the Greatest of All Time. Photo by Getty/Jamie Squire/Staff

Simone Biles is not being humble with her latest fashion statement — and who could blame her?

The gymnast has 30 Olympic medals and continues to push her sport, and seemingly the laws of physics, to new heights. Because of her mastery, she has been called the GOAT, Greatest of All Time, and was recently spotted at the U.S. Gymnastics Championships in Fort Worth, Tex., sporting a bedazzled goat on her shoulder in a quiet acknowledgment of the fact. She lived up to the rhinestones, shattering a record with her seventh national all-around championship.

But it’s unclear if Biles knows that in adding this dash of flair to her leotard she is aligning herself with a grand tradition that goes back to Bible times.

The GOAT is on Simone Biles’ shoulder tonight at the U.S. Championships. Live on NBCSN right now. pic.twitter.com/0WcQiitZlr

In a pivotal moment in Genesis, Jacob’s mother, Rebecca, covers his “hands and the hairless parts of his neck with the skins of kids.” This goat getup is all a clever ruse to convince Jacob’s dad, Isaac, that he is his famously hairy (and likely smelly) older twin, Esau, and nab the blessing intended for him.

Now, whether or not we approve of this action — and we’ve slammed Jacob for it in the past — there can be no doubt that it set him down a path of greatness. Maybe not the Greatest of All Time, but arguably the Greatest of His Time.

After this subterfuge, Jacob went away for a while, as one does when their brother’s trying to kill them, and engaged in some athletics of his own, wrestling an angel and gaining the nifty new name Israel. We know what happens from there: 12 sons, the tribes of Israel — the guy earned his goatskins and even made up with his brother.

Could he manage a flawless floor routine? Probably not, though his bout with the angel, like Logan Paul’s eight rounds with Floyd Mayweather, went better than you might expect.

Our history shows that Jacob was right to imagine bigger things for himself when he cloaked himself in goat hides. Thankfully, fashion improved in the next generation, with Biles’ spangly leotard having a natural forebear in Joseph’s fabulous coat.