Paul Manafort: Your $15K Ostrich Coat Will Be Your Downfall – Just Ask Joseph! 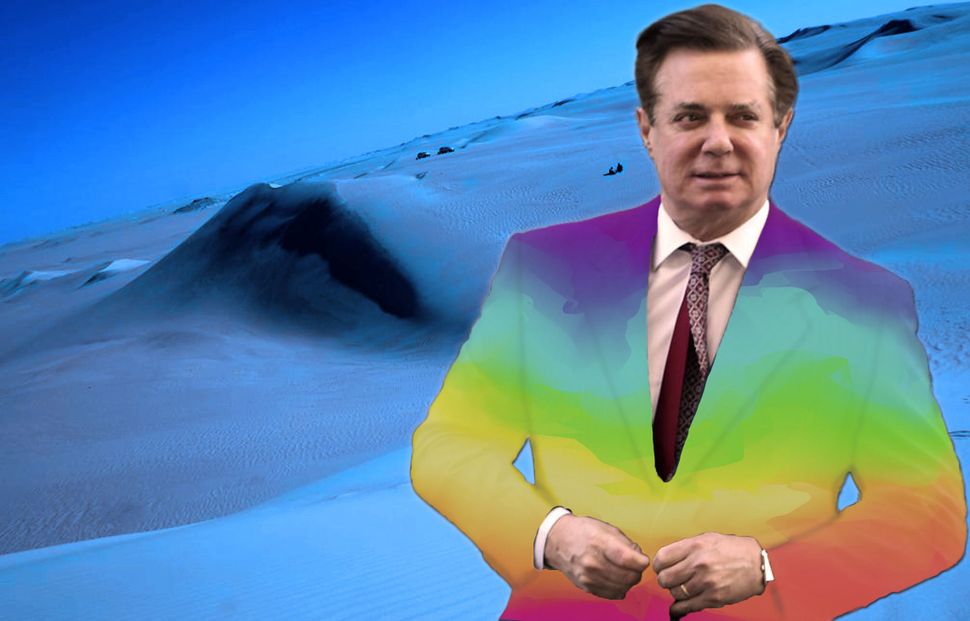 US District Judge T.S. Ellis III, the judge in Paul Manafort’s highly publicized criminal trial, has been expressing frustration regarding the angle prosecutors have taken with their case.

Federal prosecutors have chosen to stress to the jurors Manafort’s wildly lavish lifestyle, fixating on his extravagant purchases. These range from silk rugs to multiple sprawling homes, numerous high-end cars, and, our personal favorite, a $15,000 ostrich coat.

The American public has zeroed in on the ludicrousness that is a coat that costs more than a house in Detroit, and have gleefully ripped into it on social media, turning Manafort and his purchase into an object of very stylish derision.

If there was any justice in this world there would be an ostrich somewhere carrying Paul Manafort as a handbag.

Several times throughout the ongoing trial, Judge Ellis has snapped at prosecutors, questioning and shutting down some instances in which lawyers aggressively presented Manafort’s costly purchases. The prosecutors responded smoothly to the judge’s irritation, arguing that they need to showcase Manafort’s lifestyle because it helps them inform the jury’s understanding of his income, which he allegedly misreported on his income tax returns. It is therefore essential, they claim, that the details of his extravagant purchases be presented to the court.

“We don’t convict people because they have a lot of money to throw around,” the Judge sternly rebuked the prosecutors.

Wait…we don’t? Judge Ellis, we may have to respectfully disagree with you! Legally, wealth isn’t a crime. But socially, punishment for flaunting excess goes back to ancient Torah stories. The prosecutors’ strategy and Manafort’s circumstances are oddly reminiscent of what occurred when Jacob, our biblical forefather, bestowed an extravagant coat on his favorite son Joseph in the Torah.

Think back to the riveting Torah story. It possesses a striking resemblance to this convoluted current day saga — Joseph drapes himself in a luxurious coat, arousing contempt and jealousy amongst his brothers. This physical sign of his privilege leads them to plot his downfall, which they enact with gusto, kidnapping and tossing him into a pit.

And if you know the Torah (or the Andrew Lloyd Webber musical) well enough, you know that this pitfall (if you will) leads to servitude, and servitude leads to his imprisonment. Sure, eventually Joseph returns to fame, power, and fabulous wealth, but he’s a key player in God’s cosmic plan. Manafort probably won’t be so lucky.

Perhaps Manafort should have realized — the public may be addicted to celebrity, but everyone loves to hate a privileged man. It subconsciously squeezes our psyches to know that someone is parading around in riches while we, mere plebeians, are not. The Torah makes it clear that Joseph is gorgeous — besides being a polymath and a charmer, he is called “well-built and handsome” — just before being attacked and framed by his master’s wife. His aesthetic quality and sense of taste turn on him again and again. Joseph’s brothers, and later his employer, cannot bear to be around his glamour. This resentment is exactly what prosecutors are counting on from jurors.

Prosecutors have strategically honed in on exposing the intricacies of Manafort’s excessive spending in order to connect with the spirit and reality of the American public and, more importantly, the jury: the values and mindset of the common man. Repeatedly listing and emphasizing Manafort’s extreme lifestyle is undoubtedly a tactic to shred any semblance of sympathy and concern for the defendant that the jury may have. He automatically becomes un-relatable and unlikeable to them — just as Joseph did with his brothers. For both Manafort and the biblical anti-hero, a coat will be their hamartia.

A typical American frequents the likes of Gap and Walmart, but lives surrounded by images of wealth. Hearing of Manafort’s careless and obsessive spending habits is likely to instill animosity among members of the jury, which could have serious consequences for the sharply dressed former lobbyist.

If only Paul Manafort had spent some of those long shopping hours reading a little Genesis.

Paul Manafort: Your $15K Ostrich Coat Will Be Your Downfall – Just Ask Joseph!