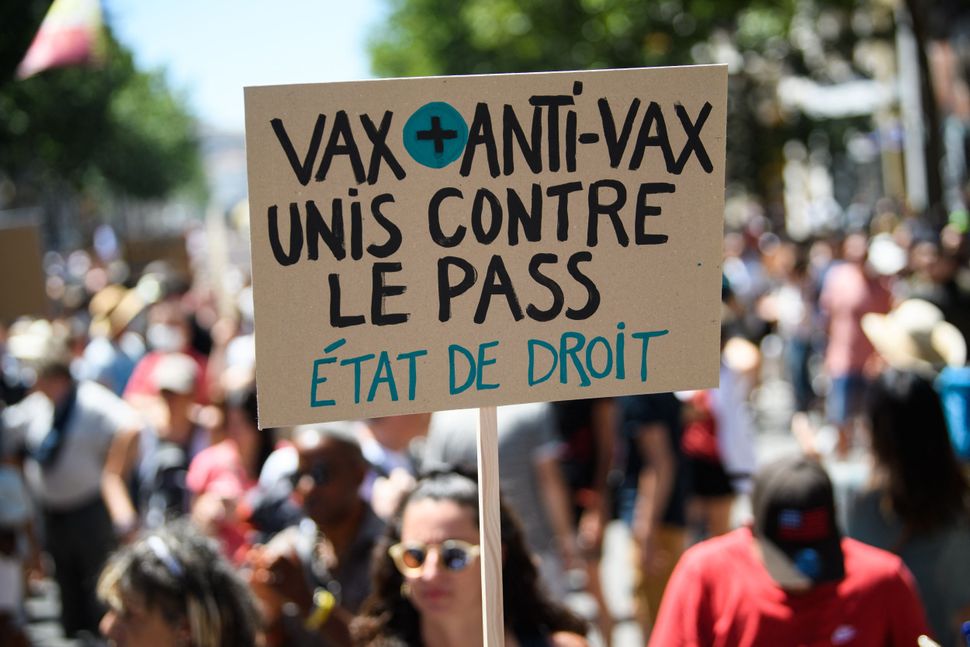 Last week, the Public Religion Research Institute released its study on the degree of vaccine hesitancy of American faith groups. The findings were, perhaps, not surprising: American Jews register, by far, the lowest degree of hesitancy towards vaccination.

A study on the attitude of American faith groups toward the current political tensions in France over vaccination might find an equally unsurprising result: namely that American Jews are experiencing the highest degree of confusion.

The French government’s decision to impose a vaccination pass has spurred a burgeoning series of protests across the country. Over the past month, the size and tenacity of the crowds have grown. So, too, has the frequency of certain signs which superimpose the swastika and Hitler’s mustache onto the face of President Emmanuel Macron and associate his government’s policies with the Nazis.

How can it be that the cradle of the Great Revolution — an event that not only gave the world the credo Liberté, égalité, fraternité but also, for the first time in history, gave full citizenship to its Jews—now seems intent on becoming the graveyard of these same values?

Paradoxically, the Revolution — especially its understanding of liberté — might hold the answer. Like equality and even fraternity, the concept of liberty has evolved over time.

Before 1789, one spoke not of liberty, but instead of liberties — the exemptions and immunities that various groups (like the aristocracy and clergy) had historically claimed from the king’s rule. By 1789, however, as the old regime began to fracture and falter, the appeal to liberties congealed into an appeal to liberty.

Yet this new understanding kept the essence of the older understanding — namely, liberty meant freedom from. Whether it was freedom from despotism or dogmatism, threats against one’s person or property, religious convictions and political beliefs, liberty has a negative charge. Not unlike my teenager’s bedroom, liberty defines the space where one, while respecting the rights of others, can be left alone. The grander one’s space, the greater one’s liberty.

In 1789, revolutionaries enshrined this notion of liberty in their constitution. The writers carved out a negative space for Frenchmen (though not women) by declaring the individual’s rights as sacrosanct and secure. Yet the full title of the document which turned Jews into Frenchmen — the Declaration of the Rights of Man and Citizen — reflects the deeply conflicted nature of liberty. It affirms not just freedom from — something all human beings have the right to enjoy — but also freedom to. A person is free to enjoy their sacred negative rights, but also expected to meet their equally sacred positive rights toward the nation.

In any system, it is vital to maintain a balance between negative and positive charges. An imbalance can lead to a burst of static electricity or, worse, an electrical fire. What is true for the atomic makeup of physical objects is also true for the makeup of political objects — constitutions, for example. But inevitably, any democratic constitution is shot through with tension between these two notions of liberty. No less inevitably, this leads to moments of great static and occasional violence.

Et voilà the anti-vaccine passport protests in France. For the past four Saturdays, the number of protestors has steadily increased. Just two days ago, August 7, nearly 240,000 men and women in cities across France — with over 17,000 in Paris alone — took to the boulevards to protest the government’s introduction of the “passe sanitaire.”

Predictably, the media have glommed onto the contemptible symbols peppering the demonstrations. Whether it is slapping Hitler’s mustache on Macron’s face or, most remarkably, pinning a yellow star to one’s shirt, the historical and moral inanity is clear. No less clear is the attraction this movement has for political opportunists, like Marine Le Pen’s former advisor, Florian Phillipot, to return to the media limelight.

But the protests, no less clearly, have attracted not just knaves and know-nothings. Many who are joining the demonstrations worry that the vaccine pass, which will prevent the unvaccinated from engaging in most public activities, ultimately threatens the personal liberty of both the vaccinated and unvaccinated. At the same time, a growing number of prominent intellectuals have weighed in on the new law’s potential harm to personal liberties.

Among these thinkers is Emmanuel Hirsch, one of France’s leading medical ethicists. In a Le Monde op-ed published after last Saturday’s demonstrations, Hirsch dismisses those demonstrators who believe in conspiracies and charlatans. Yet he also takes to task Macron and his government for their allergy to dialogue. Hirsch laments that Macron did not use the health crisis to redress a social crisis based on the public’s distrust of public officials. If only, he remarks, the government had seized this occasion to organize dialogues between public officials and, well, the public they serve. The persistence of the protests, Hirsch concludes, is partly the result of this systematic refusal of public discussion.

Of course, the reasons for the vaccination passport are compelling. Indeed, the passage of the passport law has dramatically boosted the vaccination rate. Yet the law’s passage has also increased the already widespread sense of méfiance, or distrust, many French feel for the government. In an age already brimming with tragedies, we can add one more: at times of crisis, a democracy must use potentially undemocratic methods to save its citizens.