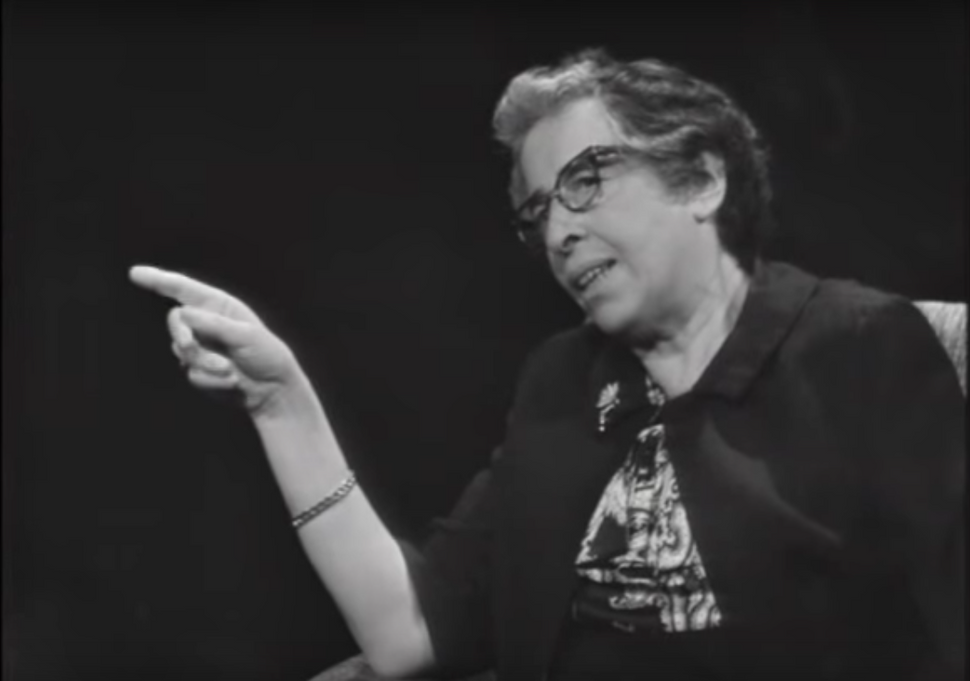 Hannah Arendt, who wrote extensively about authoritarianism, the nature of evil, and power, is having a bit of a moment. Currently circulating the internet (my twitter feed, at least) are two interesting articles regarding the Jewish philosopher’s legacy. First, we have Zoe Williams’ piece for The Guardian, “Totalitarianism in the age of Trump: Lessons from Hannah Arendt.” In her article, Williams observes, as so many have, that Arendt’s “The Origins of Totalitarianism” has become a “surprise hit” with copies on Amazon selling out over the weekend. As kind of an overview on Arendt’s thought, Williams’ piece delves into anti-Semitism, totalitarianism, the authoritarian voter, protest, and a couple other topics, all with the help of various scholars – who offer commentary on whether we can truly apply Arendt to our current situation, and whether “The Origins of Totalitarianism” is the right book to turn to.

If you hadn’t guessed it from the title, Williams endorses many of Arendt’s views, particularly those regarding the idea of pan-ideologies, that are, as articulated in the article by Professor Griselda Pollock, “ideas that overarch national, political and ethnic elements” such as “bolshevism and nazism.” Williams seems to believe that Trump has created a sort of pan-ideology (a highly dubious claim – Trump, as of yet, seems to have no coherent ideology whatsoever and “America First,” foolish and fascist as it may be, is not Eine Volk, Eine Reich, Eine Fuhrer), and that it is a mark of pride that the left has not “been effective in this space, even if it feels like a failure.”

The other article in question, Emmett Rensin’s “You don’t know Hannah Arendt” for The Outline, takes the opposite stance. Reacting to a recent crop of articles about Arendt (Rensin would likely provide Williams’ as a good example, but her piece engages more critically with the philosopher than, say, this one), Rensin argues that Arendt’s legacy has been largely misunderstood (he asserts that many pundits have used Arendt merely to assert that “fascism is bad,” which is true, but also seems to be a fair usage), and worse, used as a cover by the left to avoid dealing with liberalism’s problems.

“It is no coincidence that, when stripped of its nuance and reduced to summary, this view corresponds neatly with liberal incomprehension of Trump. More than that, it gives reassurance to those who wish to believe that the failures of international liberalism are not to blame for the present conditions: income inequality, free trade, drug epidemics, and war. It was not these policies that led so many Americans to revolt against their own society, and therefore it is not the authors of those policies who are responsible for that revolt. The Trump coalition is only reacting poorly to a more progressive world, and there is nothing progressives could have done about it, short of fundamentally betraying their obligation to the oppressed.”

It’s a harsh piece (probably a little too harsh), but it makes some incredibly interesting, and relevant points. Most compellingly, Rensin blasts the liberal political establishment for “laughing and drinking at the White House Correspondents Dinner while the poverty and terror of reaction fermented in the country.” They are all representations of, in the language of Arendt, the “banality of evil” – “trained,” as Rensin writes, “to look out for their own petty standing first. Our professional set has been a horde of Eichmanns all their lives.”

Regardless of whether we agree with Rensin’s assessment of liberalism, if we start from the fact that Trump is our president, then we can see the that something has gone fundamentally wrong in our country – clearly the last eight years were not a glittering success. If the country is to move forward, if we are to avoid further Trumps, then the left needs to honestly confront its own problems and the policies that led to the rise of Trump – simply blaming them away on Russia and Arendt’s notion of mass psychology will not win over any voters.

On that point, I’d like to add to Rensin’s argument a similar batch of articles that inform us of the prescience of the Frankfurt School – in particular, philosopher Theodor Adorno (these articles are somewhat in the same vein as that piece that told us that Marx’s “ideas may help us to understand the economic and political inequality of our time” as if that were some sort of revelation). Articles like this one from the New Yorker draw upon Adorno’s cultural criticism to talk about the fact that “Trump is as much a pop-culture phenomenon as he is a political one.” A true enough insight, but the article misses the opportunity to reflect on the left as well and note the reliance upon vapid celebrities to evangelize its message – the entire American political system is guilty of this devolution into pop spectacle.

Adorno was incredibly prescient, and his writing is deservedly enjoying a moment of prominence, but we can not forget that one of the things that made him such a great thinker in the first place was his willingness to adapt (despite his notoriously stodgy and elitist attitude). In response to the Cold War failures of the Russian communist party (“People are as yet unaware that the Russians are fascists,” Adorno wrote) Adorno and his Frankfurt School partner Max Horkheimer conducted a dialogue in which they attempt to update the Communist Manifesto for their political situation – later printed as “Towards a New Manifesto.” Rather than cling to the dogmas of the past, they adapted. The American left must do the same if it hopes to ever regain influence in this country.