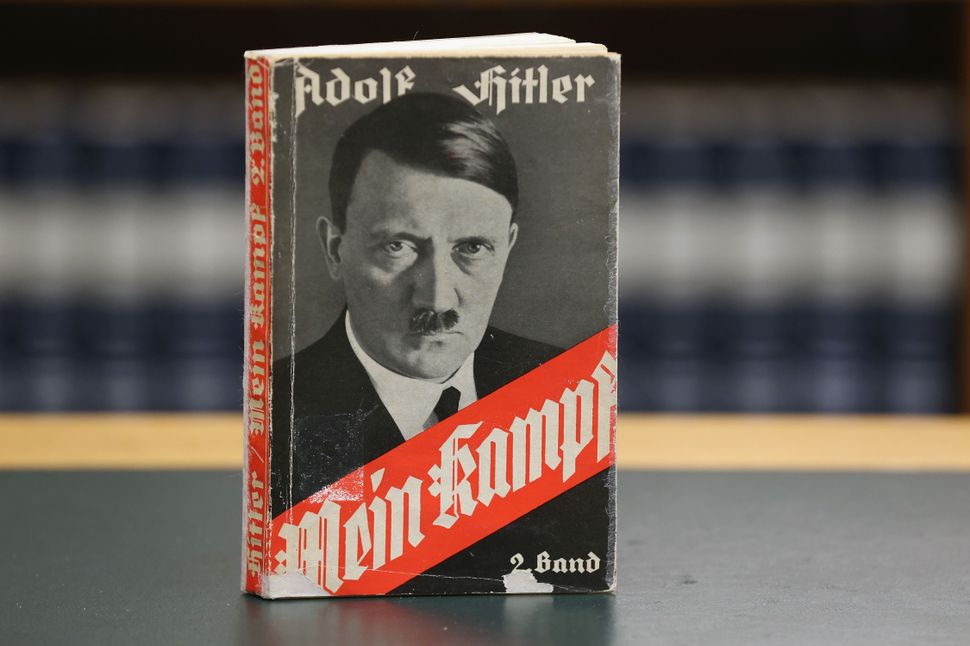 A 1941 edition of Hitler’s “Mein Kampf.” Image by Getty/Sean Gallup/Staff

There are moments in literary history that shape the world. Around 1445 B.C.E. unnamed sources composed the first books of the Bible. In 1450 Johannes Gutenberg perfected his printing press. Thomas Paine publishes “Common Sense” in 1776. And in 1848, Karl Marx wrote “Mein Kampf” — at least that’s what one Fox anchor said.

On Tuesday at the end of a segment about whether critical race theory should be taught in elementary schools, “America’s Newsroom” co-anchor Bill Hemmer recalled, apropos of very little, searching for Marx’s home in Trier, Germany while in college “cause, you know [in] 1848 he wrote ’Mein Kampf.’ Want to know what it was all about.” Us too, Bill!

“Karl Marx, y’know, 1848 he wrote Mein Kampf. I want to know what it was all about. So, that’s part of the education of America, if you so choose”

Hemmer, who later acknowledged that he meant “The Communist Manifesto,” misspoke. But boy howdy was this a wild mistake! The rub comes in when we consider that Marx, while baptized Christian and not immune from anti-Jewish animus himself, was the grandson of rabbis on both his father and mother’s side. So even if he had his issues with the Jews, saying he wrote this particular screed is a bit much, never mind the fact that it debuted some 40 years after Marx’s death and tells another guy’s life story.

The authorship naturally becomes all the more mystifying given what “Mein Kampf” has to say about Marxists!

Some on Twitter wondered how far Hemmer’s initial confusion might extend, with David Simon offering this waggish correction:

Narrator: “Mein Kampf” was published by Rupert Murdoch in 1973. Karl Marx and his brothers published “Animal Crackers” in 1848. https://t.co/ENX4eIngcj

It’s entirely possible and maybe even likely this was a simple mistake on Hemmer’s part. Still, given how often it’s repeated in rightwing circles that Nazis were socialists, and the regular vilification of Communism as the Great Evil, it’s not unreasonable to have suspicions about intent.

But I have more questions. Did Hemmer ever find the Marx homestead — a museum and landmark that is quite easy to find? Does he often have this kind of critical brain fart, say, showing up for a seat for “The Ring Cycle” and walking out when they don’t play Mahler? Is his Amazon cart gunked up by returns of the “The Turner Diaries” cause he always blanks on the name of a Chaim Potok book at checkout?

In any case, next time Hemmer takes a trip to Germany, he may want to bring a Rick Steves guide with him — and maybe a better bibliography.