Drawings and sketches from concentration camp prisoners and people in hiding during WWII. By Mira Fox

In most art exhibits, each piece has a plaque that identifies the title, artist, subject, and style. At The Jewish Museum’s newest exhibit, however, each plaque has two descriptions. The first is a standard explanation of the piece. The second explains who owned the painting before the Nazis stole it — and how it was later recovered.

“Afterlives: Recovering the Lost Stories of Looted Art” shows not only the breadth of cultural heritage smuggled away by the Nazis but also the journeys the pieces of art went on after being recovered from Nazi vaults or transports. 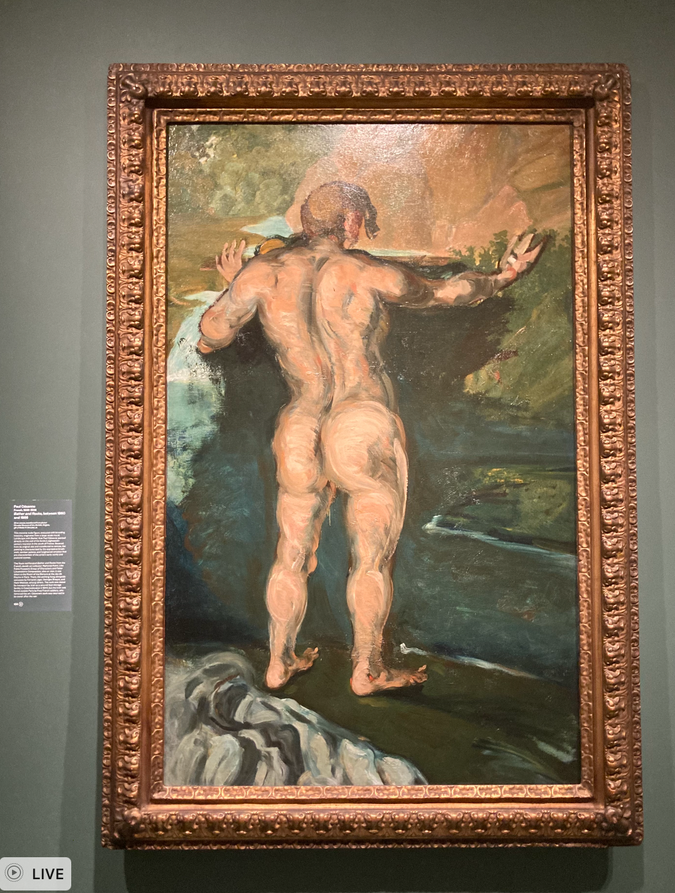 Paul Cezanne’s “Bather and Rocks” was confiscated from the
French Jewish art collector Alphonse Kann and hung in the Room of Martyrs. While being transported to a new facility, it was found outside Paris by Free French soldiers, and returned to its owner after the war. By Mira Fox

While the gallery has some starpower, the main takeaway has little to do with the stylized composition of Matisse’s “Daisies” or the enormous 17th-century biblical oil painting by Bernardo Strozzi. (If anything, the wall text and contextual framing makes it hard to approach the art directly in light of the destruction wrought by the Nazi regime.) Instead, the exhibit follows what happened to the art and where it went; the paintings serve as anchors for the history the exhibit explores.

Without the descriptions, some of the art would show no signs of their connection to the war and the Holocaust. Paul Cézanne’s “Bather with Rocks” was confiscated from a Jewish collector’s vault and eventually rescued off of a Nazi transport train, but looking at the larger than life nude portrait, of course you would never know. Paul Klee’s “Two Trees,” with its abstract slashes of paint, also bears no signs that he created it after fleeing the Nazi regime, which labeled him degenerate. 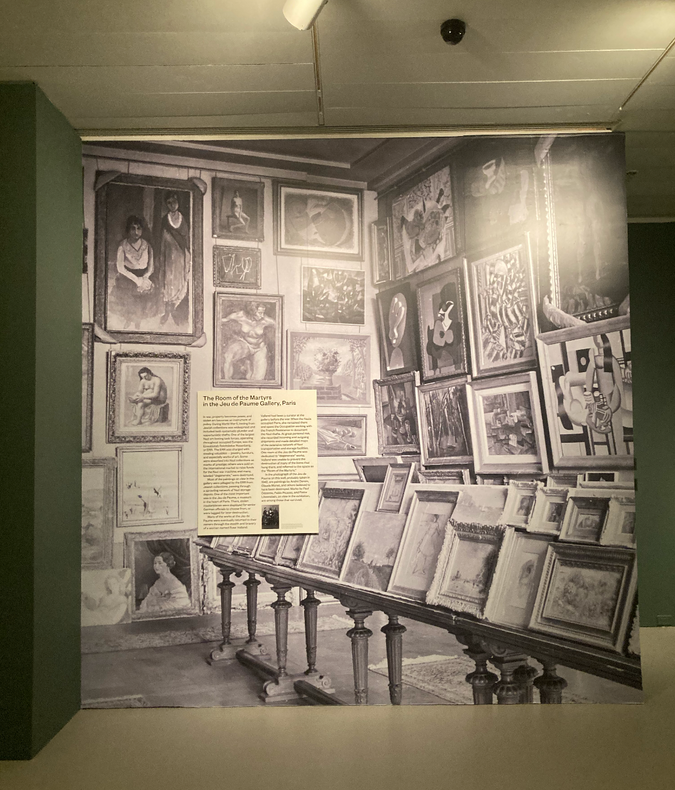 The entry to the exhibit features a photo of the “Room of the Martyrs” at the Jeu de Paume gallery where the Nazis hung much of their looted art before deciding its fate. The Room of the Martyrs was filled with art considered degenerate and often slated for destruction. By Mira Fox

Others, however, hanging in a gallery with a wall text explaining that its works were “created under duress,” bear more obvious signs of their history. There are sketches from Terezin, a transit and labor camp, and portraits of captives and fugitives made while on the run. Roma children gaze out from rags and people scurry through piles of broken furniture. Shelves of silver Judaica, a small sample of what was found, underscoring the number of Jewish communities extinguished during the Holocaust, never to reclaim their silver Torah crowns or Hebrew books.

The exhibit moves chronologically, focusing on where the art was gathered, how the Nazis stole it and how the restitution process worked after the war. It starts with a room full of recognizable masterpieces by the likes of Picasso and Matisse, explaining how the pieces were stored by the Nazis at the Jeu de Paume, a museum in Paris, where Nazi officials decided which were slated for destruction and which would go to private collections or Hitler’s planned Fuhrermuseum. It goes on, through several other rooms, to trace the art’s journey after the war through sorting depots and restitution organizations that attempted to rehome objects whose owners were killed in the Holocaust. 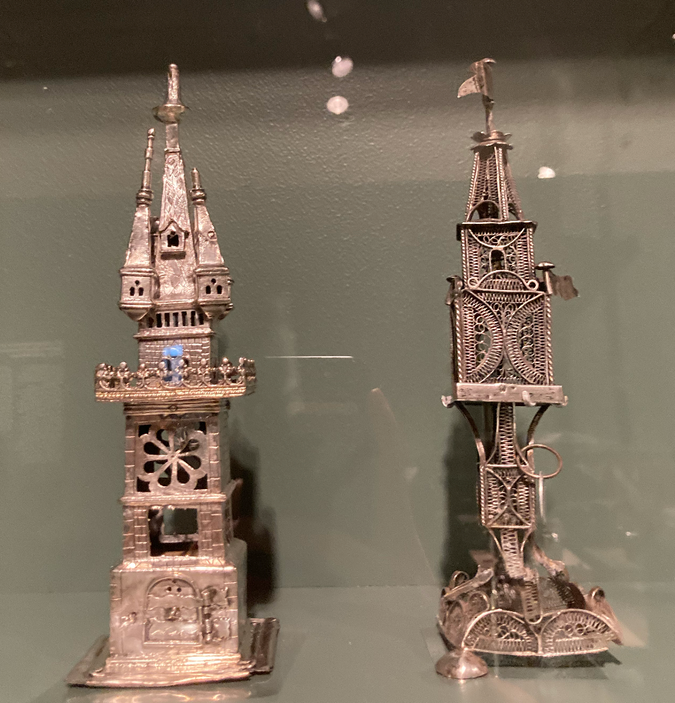 Two spice containers for the Havdalah ritual, from the Jewish Museum’s collection. By Mira Fox

The Jewish Museum itself, which opened to the public in 1947, is an active player in much of this history. It was central to the restitution effort after the war, acting as a collection depot for unclaimed Judaica and Hebrew books retrieved from Nazi vaults and storage facilities, which were then distributed to Jewish communities throughout the country. Many objects passed through the museum thanks to the Jewish Cultural Reconstruction Inc., an organization led by Hannah Arendt.

Some parts of this history, however, could have received more attention in the exhibit. The wall text in the beginning of the exhibit lays out some of the importance of art to the Nazis, who sold some masterpieces to fund their war effort and hoarded others to bolster the regime’s prestige. But despite the many references to art and artists deemed degenerate by the Nazis, the exhibit doesn’t explore the idea of what constituted degenerate art in the eyes of the Nazis, why modern art was considered un-German, and why Hitler and Goering sought certain works to be part of their private collections. Similarly, the exhibit could have provided more context to help visitors understand how modern and abstract styles of painting were connected with the supposed degeneracy of the Jewish people, such as through the seminal, propaganda-filled Nazi exhibition, “The Exhibition of Degenerate Art,” in 1937 that denigrated schools of art such as Surrealism.

The last rooms of the exhibition feature modern works commissioned by the Jewish Museum, which explore the ideas of looted art’s history, including sketches of the archival photos from the restitution depots by Hadar Gad, an Israeli artist, and a collage by the Brooklyn-based Lisa Oppenheim using a photograph of a never-found piece of art by Jean-Baptiste Monnoyer.

While the famous works of looted art are the most striking part of the galleries — Picasso, Cezanne, Matisse, Klee — they more feel like a flashy introduction to the explanation of the restitution process. What the exhibit excels at, however, is highlighting the painstaking work that went into restoring justice to the extent possible, bringing the stolen treasures back to the world.

And that is perhaps the point — the Nazis, despite their best efforts, did not control art’s fate. It lives on.