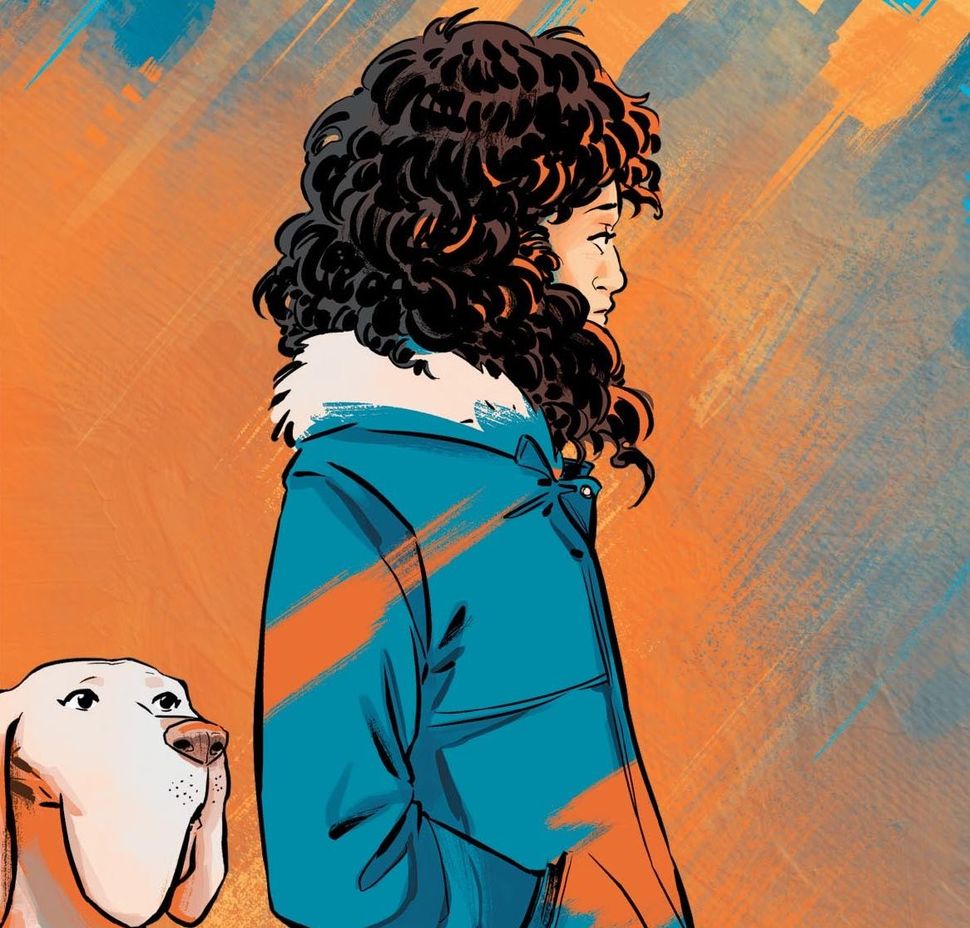 Willow Zimmerman on the cover of “Whistle: A New Gotham City Hero.” Courtesy of DC Comics

Willow Zimmerman is a 16-year-old activist. When she isn’t in school or holding up a picket sign, she can be found batch-baking rugelach or splitting a Reuben with a stray Great Dane she named Lebowitz (after Fran).

But Willow has a secret set of extracurriculars. She helps run an illegal poker game for one of her city’s most notorious criminals. At the same time, she’s fighting crime under a superhero alias, Whistle — all in an effort to repair the world.

It’s not too often that a DC character mulls over the meaning of mitzvot, but Whistle, the comic company’s first new Jewish superhero in decades, is unlike her coreligionist predecessors. While in the past DC has been content to allude to Batwoman’s observance of Hanukkah or settle for supervillain Harley Quinn’s own, shall we say, controversial portrayal of Jewishness, “Whistle,” the new graphic novel by author E. Lockhart begins with a deep connection to the previously untapped Yiddishkeit of Batman’s Gotham.

In the opening pages, Willow introduces the Jewish immigrant past of her neighborhood, Down River, to a new classmate. They then visit the Rosen Brothers Deli and sample some corned beef. We later learn that Willow’s mother, sick with cancer, is a professor of Jewish culture. While Willow is not very religious, her Jewish background plays a huge part in her activism and eventual superheroism. In fact, she gets her superpowers — heightened senses of smell and hearing and an ability to speak to dogs — outside a synagogue.

“She’s a lot like me although obviously, you know, no superpowers,” said Lockhart, 53, a bestselling YA novelist who also writes adult fiction under her real name, Emily Jenkins. “But she’s also a lot like a bunch of the kids I know who live in New York City now.” 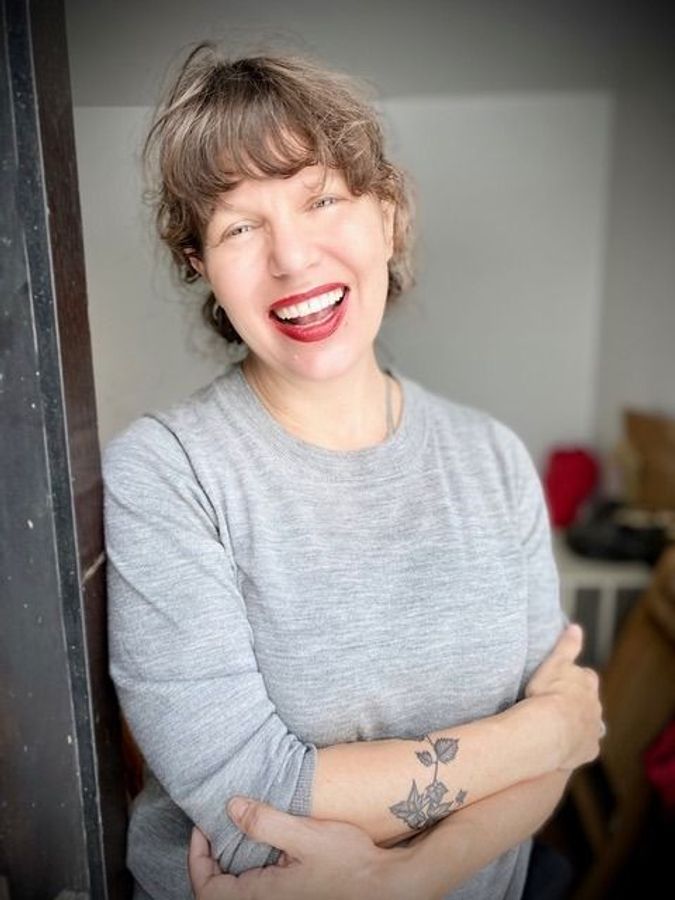 Lockhart, who as a child regularly visited her father at his home on East 15th Street in Manhattan and now lives in Brooklyn, created the neighborhood of Down River first, basing it on the East Village’s early 20th century history and its changing economic and demographic dynamics in the 1980s. Her local hero came later, inspired by kids of today who are youth members of the Workers Circle committed to social justice and proud, secular Jews.

Another point of inspiration was G. Willow Wilson’s run on “Ms. Marvel,” which introduced Kamala Khan, the first Muslim and Pakistani-American superhero, who grapples with how to express her own identity after taking over the role from the very white — and very blond — Carol Danvers. While Lockhart said that anyone can project their lives onto characters unlike themselves, Wilson’s comics made it clear how much easier that work can be when a character actually reflects your background.

“Reading ‘Ms Marvel’ led me to think that maybe I had something to bring to this new hero that was along the same lines,” Lockhart said, “Getting to create a hero whose heritage and ethnicity were important to the way she thought about being a hero.” 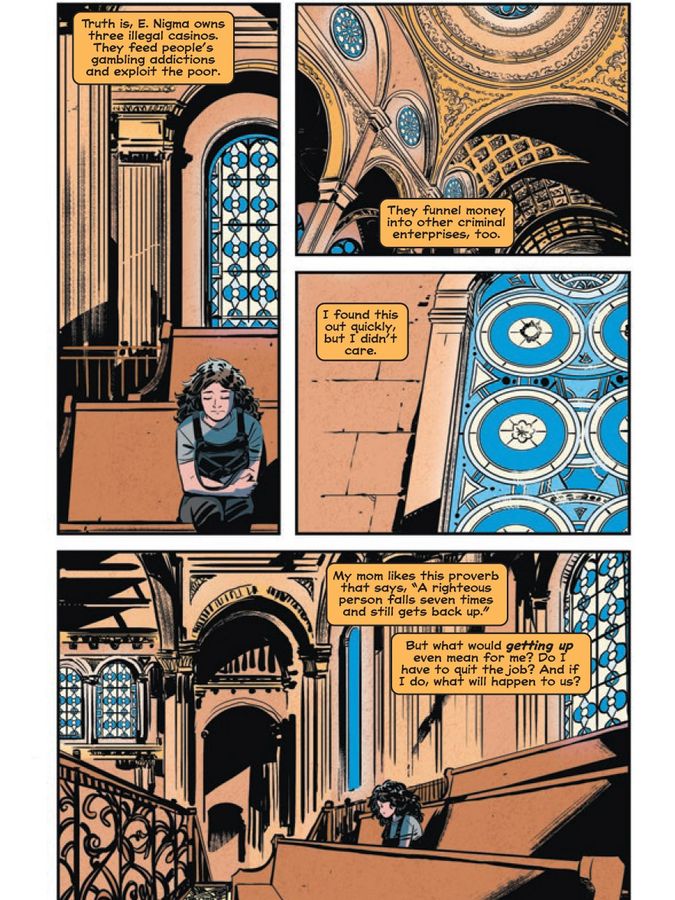 During a moment of personal crisis, Willow goes to the Remson Street Synagogue to reflect on her actions. Soon thereafter, she gets her powers. (Art by Manuel Preitano, colors by Gabby Metzler and letters by ALW’s Troy Peteri) Courtesy of DC Comics

Drawn by artist Manuel Preitano with DevaCurl-worthy hair and a love for chocolate babka, Willow reads as Jewish in a way no superheroes in the DCU have before, even though the comic empire’s most famous heroes were dreamed up by Jews. But Lockhart says the book is Jewish not just because of Willow, but the moral quandaries her story presents and leaves unanswered.

With Willow splitting her time between her work for the Riddler (her mom’s old college friend, who we learn had the name Nachtberger before rebranding as E. Nigma; “not canon!” Lockhart is quick to note) and her calling as a vigilante, she’s found herself in quite the kosher pickle on her way to tikkun olam. 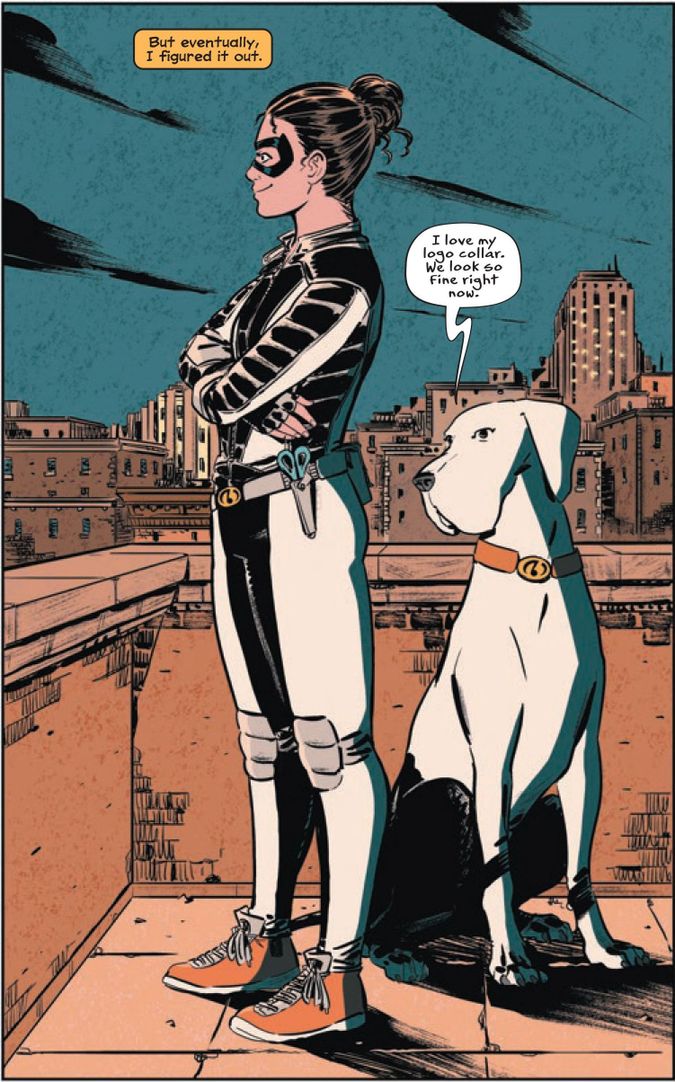 Willow Zimmerman as Whistle with Lebowitz as Hound. “Lebowitz is the first ever female dog superhero,” Lockhart tells me. Move over, Krypto. (Art by Manuel Preitano, colors by Gabby Metzler and letters by ALW’s Troy Peteri.) Courtesy of DC Comics

In the end, Willow aka “Whistle” is conflicted but decides to lead a double life. She makes much-needed money for her mother’s treatment from supervillains and saves store owners from stickups. There’s no neat ending, and there’s room to discuss Whistle’s choices in what Lockhart sees as a nod to her own intellectual Jewish heritage.

“There’s going to be questions about what is right and what is wrong, and those questions are gonna keep coming up,” Lockhart said. “You don’t get to just be a superhero and be like: therefore I am awesome, I’m definitely doing the right thing at all times.”

Next year, Whistle will continue her adventures in the Teen Titans Academy comics, where she can bring a bit of moral complexity — and maybe some decent bagels — to her fellow adolescent heroes.