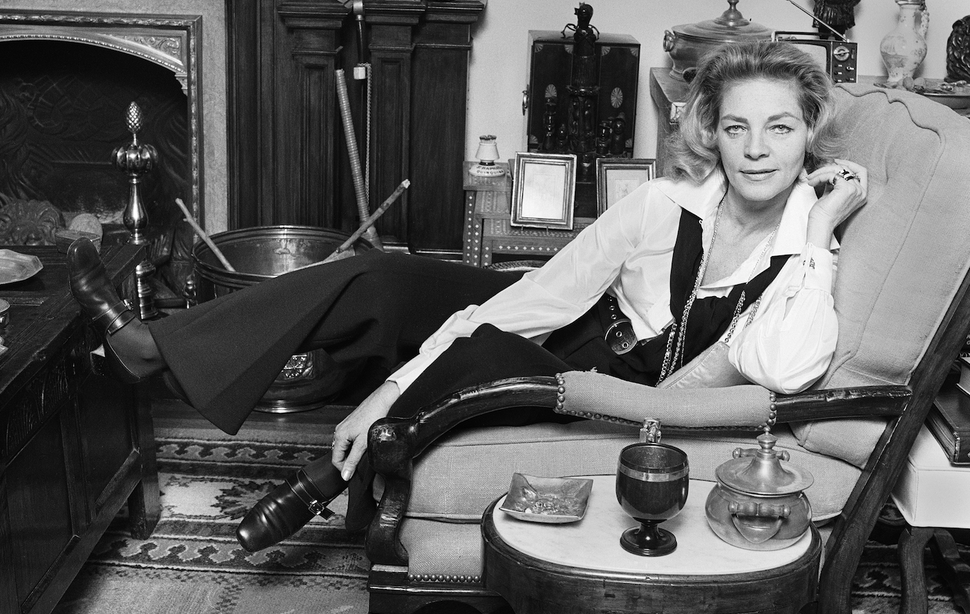 Dani Luv is getting a new gig. After 22 years in the basement digs of Sammy’s Roumanian, singing songs like “Strangers With My Wife,” the Israeli keyboard player and insult comic is taking his show to Times Square. Starting on Sept. 16th, he will perform his bawdy Yiddish-inflected act four nights a week at Bacall’s Family Steakhouse, a new sleek Jewish restaurant. It’s quite a change from Luv’s last venue, which he affectionately called “a shithole.”

Sammy’s was a cult favorite. Down a flight of stairs, with drop ceiling tiles and fluorescent lights, it looked like a dirty suburban office covered with faded snapshots of tipsy Jewish revelers. The setup might have given the uninitiated second thoughts, but with Luv at the keyboard, syrup dispensers of schmaltz on the table, and bottles of vodka encased in ice, by the end of the night, everyone would drop all airs, join hands and dance the hora.

Jewish New York let out a collective groan when in January, after 47 years, Sammy’s closed its doors. Its owner David Zimmerman has vowed to reopen, but for now, Bacall’s might mean an upscale rebirth. Their description on the job listing site Harri is upfront: “Taking a cue from now closed Sammy’s on the Lower East Side, we will present a classier version of the steakhouse.” 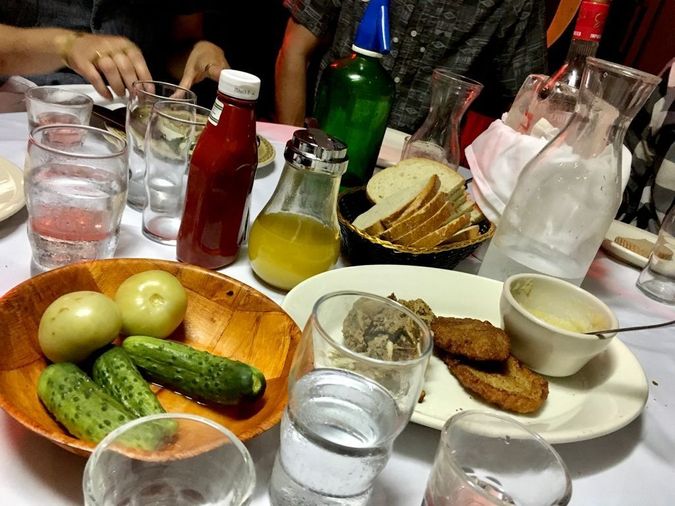 A Cult Favorite: Sammy’s Roumanian, where this photo was taken, was a cult favorite. Down a flight of stairs, with drop ceiling tiles and fluorescent lights, it looked like a dirty suburban office covered with faded snapshots of tipsy Jewish revelers By Andrew Silverstein

Some may yell foul for stealing Sammy’s schtick, but New York Times food columnist Mimi Sheraton called out the original Sammy Friedman in 1978 for adopting the menu of his former employer, The Parkway. And most certainly, decades earlier, The Parkway lifted its recipes and Yiddish vaudeville-like entertainment from the several early 20th century restaurants around Delancey Street that varied their spelling – Romanian, Roumanian, Rumanian – but otherwise offered the same alcohol-fueled and artery-clogging feasts.

Historian Hasia Diner in her immigrant foodways book “Hungering for America,” writes that these “tony restaurants served as magnets for newly minted ‘uptown’ Jews” who preferred old-world tastes and the company of fellow landsman over the “lobster a la Newberg” of trendy Jazz clubs. At its peak in the 1950s, there were a dozen or so such establishments around New York. “All the Romanian steakhouses had pretty much the same menu,” says food writer Arthur Schwartz, in his book, “Arthur Schwartz’s Jewish Home Cooking.”

Sammy’s was the last link to this history. Before it opened at 157 Chrystie Street, there had been a Romanian steakhouse at the address since the 1930s. Over the decades, a patina of latke grease formed, lending an aura of authenticity. Its “B” letter sanitary grade told you this place wasn’t trying too hard. It’s an organic ambiance Bacall’s can’t manufacture with “classic shots of Times Square and Hollywood actors,” especially in a mammoth three-story venue that until 2017 was Guy Fieri’s decidedly goyishe American Bar & Kitchen.

“It can’t have the same vibe as Sammy’s,” says Luv of Bacall’s, “but it’s great, very old-fashioned and has a lot of character.” He has faith in his new boss, restaurateur Ken Sturm. “He’s a Jew,” the keyboardist assures me, adding in his Israeli accent, “he’s a creative genius.” 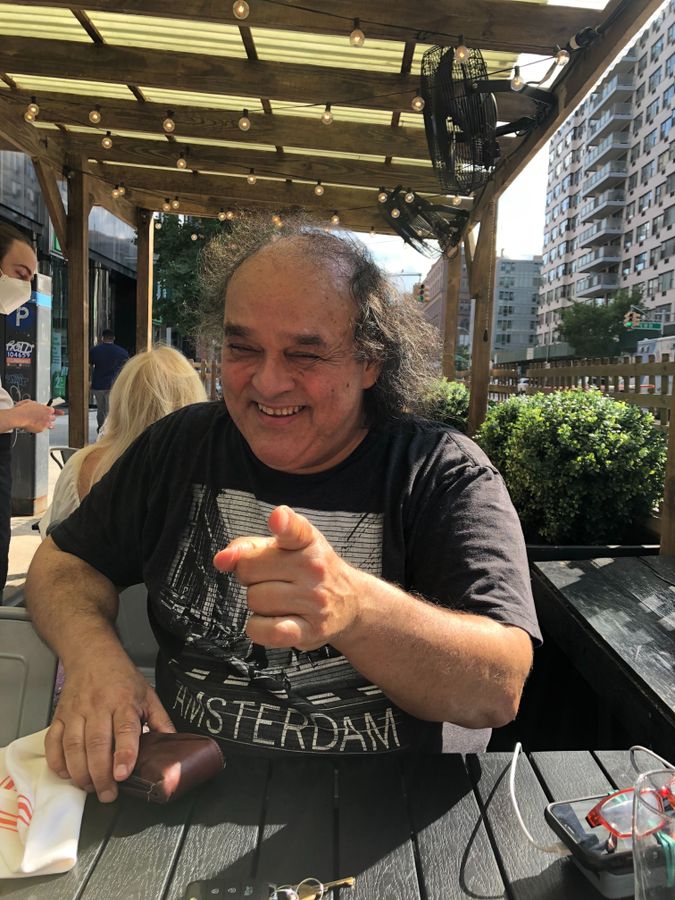 Dani Luv: The entertainer grew up speaking Yiddish with his grandfather in Israel and was obsessed with Sinatra and Louis Armstrong. Courtesy of Dani Luv

Bacall’s is a revamping of the 44th Street location of the steakhouse The Ribbon, which Sturm opened in 2019 with brothers Eric and Bruce Bromberg of the Blue Ribbon Restaurant Group. Replacing The Ribbon’s “keto” menu section are “Dani Luv’s After 8 Special Cuts,” high cholesterol Romanian steakhouse classics. The restaurant is 1940s themed, which I guess means the heady postwar era, not the years of ration books and fretting over the Romanian Jews stuck in Nazi-occupied Bucharest. The new name matches the retro glamorous Jewish style, which claims inspiration from Lauren Bacall, who the restaurant owners describe as “a shy Romanian Jewish girl.” The starlet was actually born in the Bronx. Her mother, Natalie Weinstein-Bacal was from Romania, but close enough.

If Luv is right and Bacall’s is legit, it will mark the return of something interesting and authentically New York to Times Square. An antidote to Bubba Gump Shrimp Co. and Planet Hollywood. But given the location, a big chunk of the clientele will be tourists, or as Bacall’s management euphemistically calls them the “theater crowd.” How will the visiting Midwesterners react when a crass Israeli does his rendition of the theme from “Casablanca,” crooning “a bris is a bris is a bris”?

Perhaps Bacall’s will resemble Sturm’s nearby jazz club the Iridium, which doesn’t cater to many locals but books serious talent. The worst-case scenario is a Jewish version of Ellen’s Stardust Diner, Sturm’s other Times Square venue, a kitschy 1950s-style diner with singing waiters. If Bacall’s is just another fabricated New York experience, it will be like the CBGB’s reopening in the Newark Airport — a gut punch to old-school New York. But there is hope. As the owner of the classic bar P.J. Clarke’s, he’s franchised a New York institution without killing its soul.

An online promo video gives hints of Sturm’s vision. In it, a not particularly Jewish-looking crowd gracefully downs vodka shots, dines on thick tomahawk steaks, and dances the hora. The 64-year-old Dani Luv, balding on top with long curly hair, seductively points and winks at the camera. However, he’s singing “New York, New York,” not his signature “Sing us a song you’re a Schmatta man.” 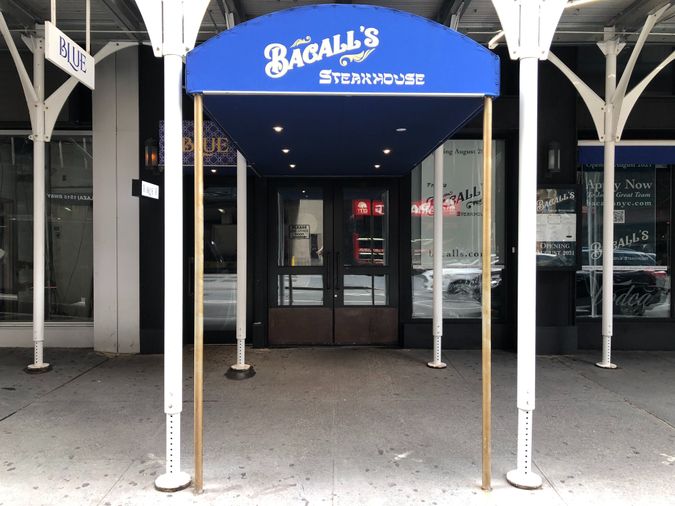 They Know How To Whistle: Bacall’s steakhouse takes its inspiration from the actress they describe as “Romanian-Jewish,” even though she was born in the Bronx. By Andrew Silverstein

The promo targets the broad public, not a niche Yiddishkeit crowd, and the opening night coincides with Yom Kippur break the fast, not a big night for Jewish carnivores.

But I was comforted by Luv’s Instagram. “I’ll bring the schmaltz,” a follower commented on the video, to which Luv responded, “Forget the schmaltz, bring your mother.” Grub Street described the showman as someone who “built a career out of saying things to rooms of strangers that could get anyone else canceled.” That Sturm would put him front and center at his “family steakhouse” proves that he’s willing to take risks.

The menu looks sturdy and polished, featuring elevated Jewish-classics like broiled Romanian meats, fried kreplach and kugel. But shtetl staples like kishkes and calves’ brains have been swapped out for kale and yellow beet salads. While Sammy’s was kosher-style at best, Bacall’s goes full treyf with lobster and Berkshire pork chops. No matter the kasha varnishkes and Hebrew-like font, I can imagine my mother asking incredulously, “This is a Jewish restaurant?” before pausing and exclaiming, “And the prices.”

But Sammy’s wasn’t cheap either, and at some point, it too lost its stomach for traditional plates like baked unborn eggs and jellied calves’ feet. When it came to entertainment, though, they never watered down the schmaltz. Before Luv, there was Ruby Levine, a violinist, comedian, and magician who honed his craft in the Catskills. By all accounts, the fedora-wearing Levine’s jokes were off-color and his music off-key, but he was enough of a character to warrant a 1983 New Yorker profile and a lengthy New York Times obituary when he died at 81 in 1998. It was then that Luv, born Dani Lubnitzki, moved to New York. 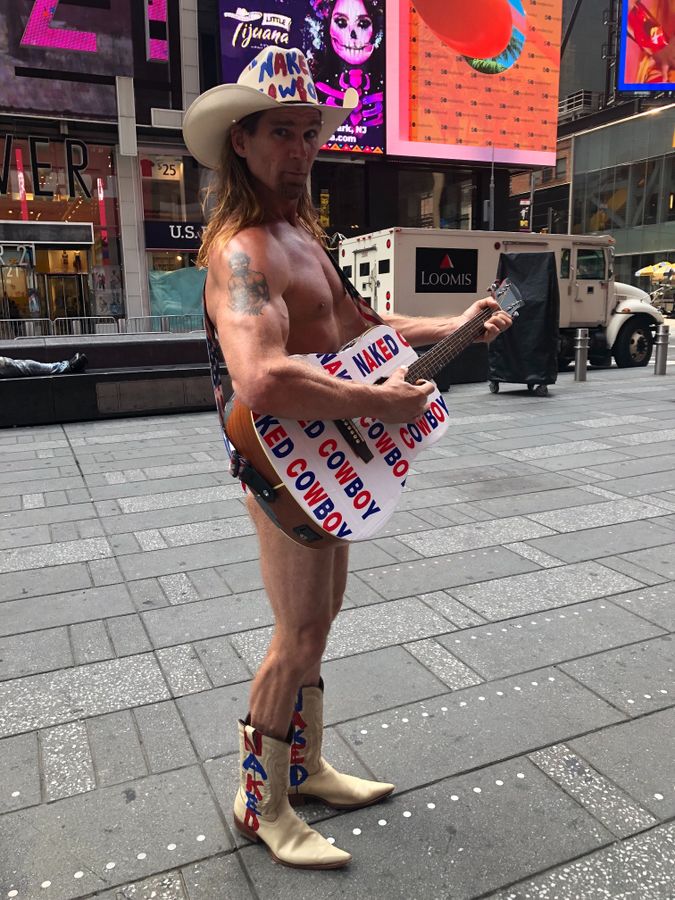 Tourist Trap: Times Square is known for hordes of out-of-town theatergoers and the Naked Cowboy, but a new nightclub is trying to change that image. By Andrew Silverstein

Luv grew up speaking Yiddish with his grandfather in Israel and was obsessed with Sinatra and Louis Armstrong. That, combined with his Don Rickles and Jackie Mason-inspired sense of humor, made him a perfect fit for Sammy’s. “It was bashert,” the Jewish troubadour says of the first time he walked into the Chrystie Street basement. Since then, he’s kept alive standards like “Hey Jew” while adding in his own parody songs.

Over time he saw the crowd change. “For my first 10 years, it was always 90 percent Jewish and everyone was 40 or 50 and up,” he remembers. “Then the young people started to come, and it became 50 percent Jews.”

In her book, Diner quotes from a 1926 Forward survey of the Jewish nightclub scene: “Eat and drink, and be merry, for tomorrow you’re uptown again. Here a man may talk in Yiddish … and draw neither stares or sneers.” By 2014, New York Times food critic Pete Wells declared Sammy’s a place “where Gentiles can act like Jews and Jews can act like themselves.” The non-Jews, invited in by uptown Jews (and later, the suburban Jews), were as much in on the joke as the butt of it — as summed up by Luv’s “I ♥ Shiksas” t-shirts.

Through these changes, Luv never tamped down his Borscht Belt act or cut the Israeli folk songs or Yiddish classics. “You see 50 Chinese dancing the hora. It’s amazing,” he says, “that’s New York. It’s a melting pot. Everyone knows everything.” For him, that’s proof that midtown is ready for his act. Times Square isn’t just Jimmy Buffet’s Margaritaville and the Naked Cowboy with his Jesus tattoo.

“Jews love Broadway,” the Israeli entertainer reminds me, and in decades’ past, the Theater District had a couple of Romanian steakhouses. Luv is confident he’ll draw a Jewish audience, but he can also handle the Gentiles.

I asked him about Sturm’s promo video. “He got together like 30 young people — all goyim and shiksas, young, not even 30. I was shivering,” he recalls. “New York Greeks and Italians, they get me. But they were blondes!” So, he eased the waspy crowd in with “Sweet Caroline” and Sinatra. “By the end of the night, they danced the hora like crazy. They had a great time,” he says triumphantly, pronouncing, “It was a very Jewish night!”