Does ‘Hallelujah’ explain Leonard Cohen? A new movie thinks so. 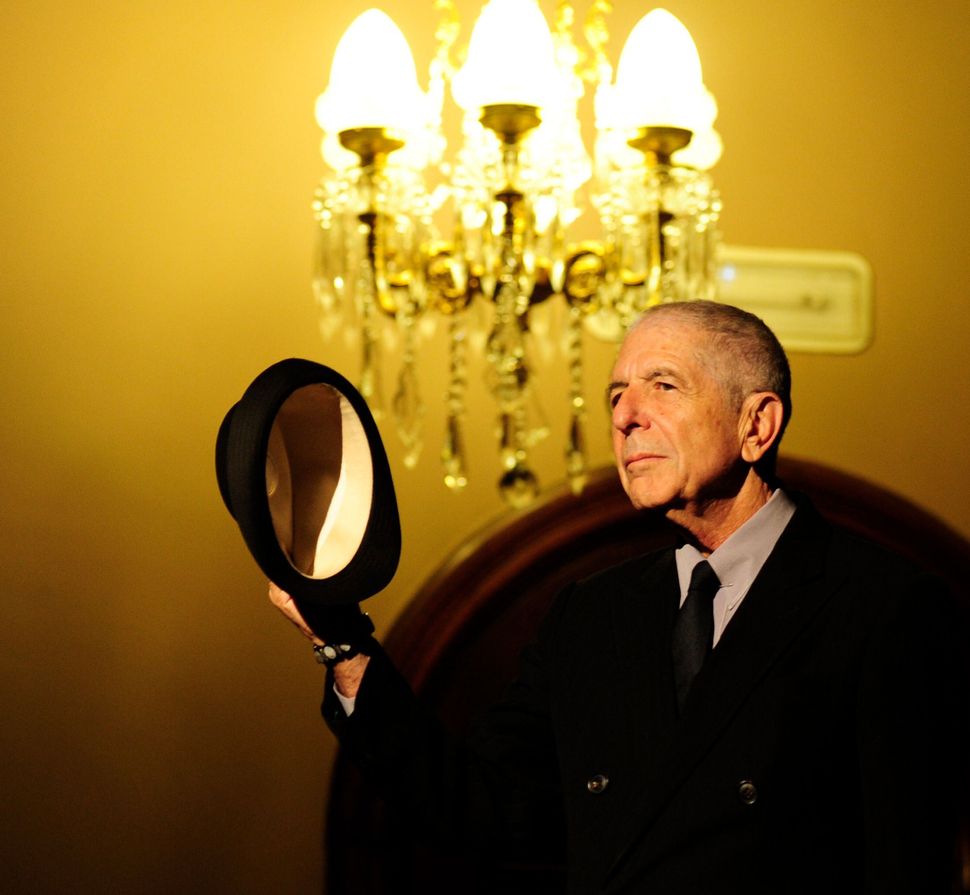 To mark his transition from poet to musician, Leonard Cohen once thought he might change his name to “September.”

“I always have this feeling that new things are beginning and I thought that I would change my name and get a tattoo,” Cohen told a TV interviewer in 1966.

When he spoke about new beginnings in September, he didn’t mean the changing weather or turning leaves or the North American school schedule. He likely meant the spiritual renewal of Elul and the start of the new year at Tishrei. And last week at the Venice Film Festival, with the head of the year approaching, Cohen’s profound connection to the High Holidays was on full view in “Hallelujah: Leonard Cohen, a Journey, a Song,” a new documentary about the “secular hymn” and the man behind it. As with Cohen’s fond feelings for September, you have to be tuned into Jewish tradition to get the film’s full effect.

Directed by Dan Geller and Dayna Goldfine, helmers of 2013’s “The Galapagos Affair,” and inspired by consulting producer Alan Light’s book “The Holy or the Broken,” the film uses Cohen’s most popular song to convey his journey as an artist and wisely limits the time spent on the tune’s ecumenical spread via noxious reality show renditions or the evangelizing of artists like Jeff Buckley. This is Cohen’s story, and for fans of his work, it is a wellspring of rare concert footage (Bob Dylan playing “Hallelujah”), archival interviews (Cohen and Richard Belzer kibitzing) and never-before-seen notebooks in which the poet famously scrawled countless unused verses for the title song.

Those pages indicate a conscious struggle to make the song accessible and the core tension between a biblical vantage point and one grounded in the secular present.

On paper we see Cohen wonder whether the first verse should simply say “David” or “King David.” He tried the line “When David played his fingers bled/He wept for every word he said/You hear him still, you hear him singing to you.” One journal shown briefly and without commentary bears the four-letter name of God in Hebrew opposite a page of lyrics invoking weeping angels, perhaps the film’s most powerful metaphor for the song’s dialogue of the divine and the commonplace. To add another layer, this last book would traditionally be buried for its holy contents but will likely be spared by virtue of Cohen’s own precious words.

And yes, continuing on the theme of buried words, we hear the oft-repeated tale of how Cohen’s first lines of poetry were deposited in his recently-deceased father’s bow-tie and hidden in the ground. We glimpse his Westmount roots with photos of his famed Talmudist grandfather and the shul where he recalled cantors singing Unetanneh Tokef. Cohen’s childhood friend, his rabbi and his musical collaborators explain his blend of virility and spiritual questing far more than this one song’s melody, the whys and wherefores of its ubiquity or even its meaning.

Larry “Ratso” Sloman, a journalist who interviewed Cohen many times over the years, opines that the songwriter’s turn toward Jewish subjects coincided with his turning 40, at which point men start to study Kabbalah and around which time songs like “Who By Fire,” so rich in liturgy, began turning up in his discography. (This song and “If It Be Your Will” are peppered throughout to remind us of the true range of Cohen’s tussles with God, even as we’re spared boilerplate descriptions of David and Bathsheba or arcane detours into the Zohar.)

Beneath these trappings of his specific, and at times obscure, heritage, we see a man eager to be understood. When faced with professional failure with “Various Positions,” the 1984 album that contained “Hallelujah” and which Columbia Records refused to release in the United States, he stripped the song of its biblical allusions when playing it live.

The David stuff “wasn’t direct enough,” Cohen told Sloman. One can wonder what was lost by cutting these references and debate what was gained by new versions that proved essential to the song’s later success: those of John Cale and, pivotally, Jeff Buckley.

While Cale’s cover, which was featured in “Shrek” and breathed new life into the song as the 18th track on a Leonard Cohen tribute album, Buckley’s emerges here as wan and indulgent. If the album cut has some power, the film showcases Buckley’s strained live performances, in which he registers as a herald of the song’s broader appeal and the death of all its dimension, Jewish or otherwise.

To Buckley’s credit, he seemed to realize this. He’s shown telling MTV that he hopes Cohen never hears his version because, to him, “it sounds more like a boy singing it.” Given how the film suggests that Cohen’s spiritual maturity — handily represented in a photograph of a menorah by a Buddhist singing bowl at his quarters on Mt. Baldy — informed the song, it’s hard to see Buckley’s contribution as an enriching one. He flattened the meaning, turned up the sex and died tragically enough to render his riff an anthem to everything.

That is the tragedy of the song now, evidenced late in the film by an ear-bleeding montage of maudlin matinee idols belting on strobe-filled stages and the many musician talking heads who invoke the “church-like” atmosphere the song creates in performance. Singer Brandi Carlile marvels at how Cohen “somehow understood that ‘Hallelujah’ wasn’t a church song, but a moment of realization that life can be desperately hard.”

It’s a relief that the filmmakers understand how Cohen reached this conclusion, the songwriter having first heard the word “Hallelujah” not in a church, but in the sanctuary of Shaar Hashomayim, a space which resounds with generations of Jews questioning God. But the fact that Carlile grasped what Cohen was saying, even through the conduit of Buckley, reinforces the potency of the message, however diluted through interpretation. And while it chafes me to see Christian frames imposed on it (and Jewish artist Regina Spektor’s commentary receive short shrift here) the way the song crossed traditions is part of the story, too.

Cohen, who is seen in the film delivering the birkat kohanim to a Tel Aviv crowd during the Days of Awe, was also the Cohen who referred to that same period of introspection and rejuvenation as “September” when appearing on a TV program.

“September is how you say Elul to a non-Jew,” Mordecai Finley, Cohen’s rabbi, said, explaining the songwriter’s attempt to express a Jewish idea to those outside the tribe.

The song and the artist speak differently to each of us, but those who know where Cohen came from hear its message clearest. This documentary’s greatest feat is cutting through the noise.

Does ‘Hallelujah’ explain Leonard Cohen? A new movie thinks so.