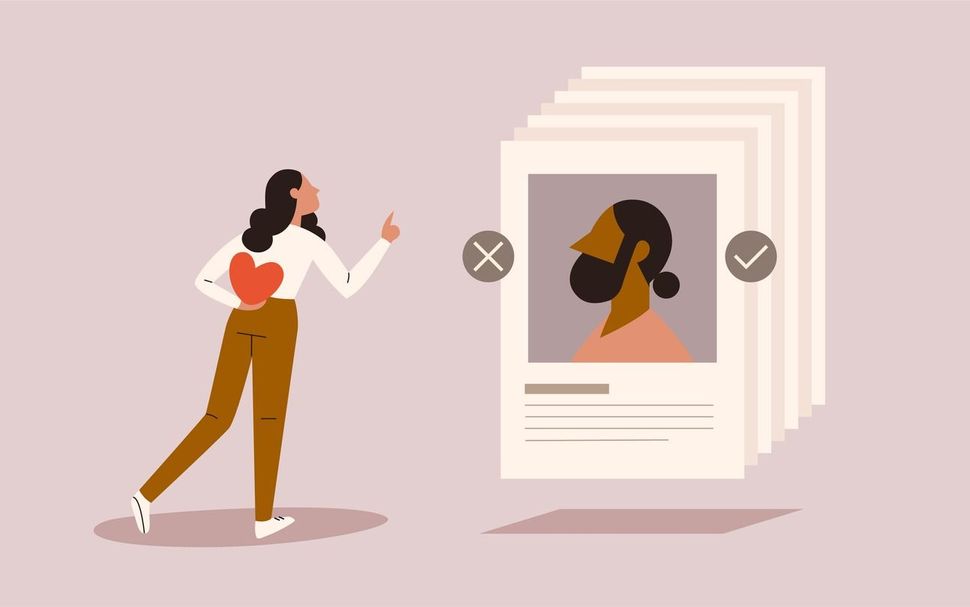 There’s no shortage of Jewish dating apps and sites, but a new one is in the works, sure to be every Jewish mother’s dream — and every Jewish kid’s nightmare.

JustKibbitz, which recently launched, allows parents to make the profile for their kids, do the swiping, choose matches and even pay for dates with gift cards to Starbucks or Chili’s — perhaps not the classiest establishments, but why look a gift horse in the mouth?

Unlike other parent-first dating sites such as Chabad Match, JustKibbitz isn’t catering to the Orthodox set. Instead, it simply proposes a solution for the fact that kids “have no time, fall for the wrong people [and] struggle to get back in the dating game.” Moms, it says, know their kids better than anyone and have plenty of time on their hands.

This is half true; like most millennials, I’m extremely jaded about swiping. Yet with hot vaxx summer officially over — not that it ever truly happened, thanks to delta variant concerns and everyone’s atrophied social skills — I feel like I need to turn to the apps before winter sets in. 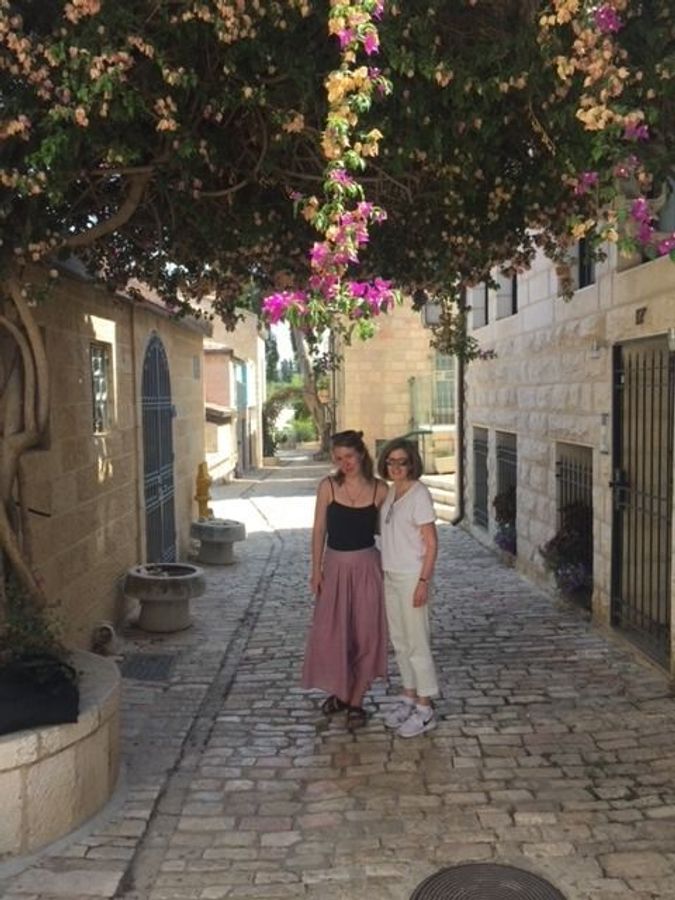 My mother and me in Jerusalem a year after I quit my job and moved there with no warning — one of many stories my mom is hesitant to share about me on a dating app. Image by Arthur Fox

On the other hand, I don’t think my mom knows me better than anyone; I rarely tell her anything about my sex and dating life. Still, I can almost — not quite, but almost — see the appeal of JustKibbitz. So I figured I’d talk to my mom about what she might say in a very hypothetical profile for me, and what she would be looking for in a man.

She instantly accepted, clearly seeing a ripe opportunity to dig for details about my social life and have the kind of conversation I routinely avoid with her. Plus, she’s retiring in November, so she’s looking for a fun project.

I started off just trying to assess her grasp of the online dating scene. While she can name many apps and sites — and has a surprisingly deep knowledge of Grindr, thanks to a legal case she had — her examples are a bit out of date, and she definitely doesn’t understand the strategies I use to weed out the mostly-terrible candidates.

When I showed her my existing profile, she was concerned I was coming on too strong. “It comes across that you’re adventurous and brave, and kind of demanding in what you’re looking for. If I was looking at that profile, I’d be intimidated,” she told me.

She expressed some concerns about pictures of me in the Negev desert working for the Midburn festival as well as a list of some of my more absurd injuries, all incurred in the course of various escapades. 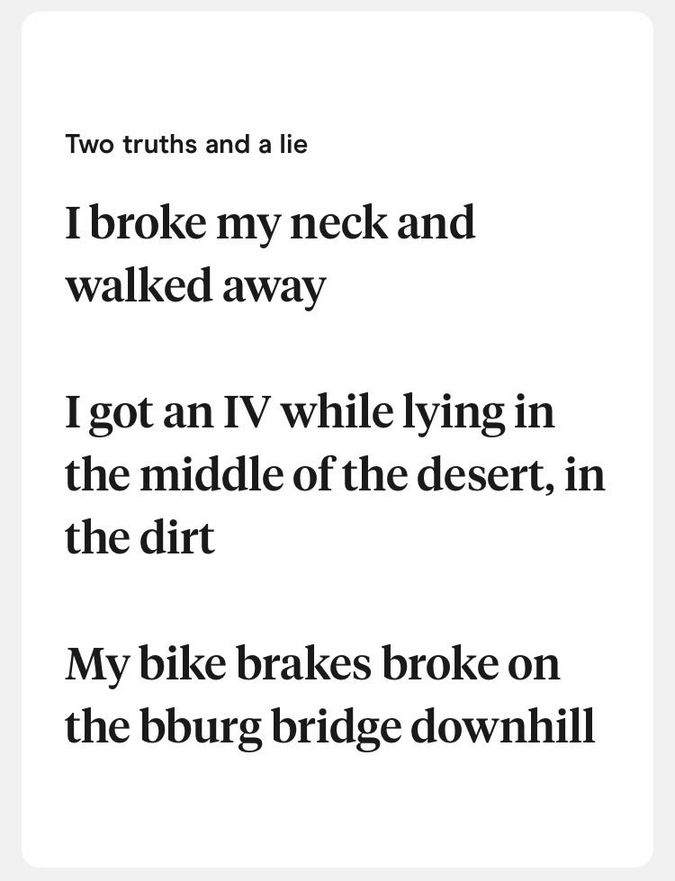 A selection of my storied injuries; feel free to guess which one is fake. Image by Hinge

I tried to explain that intimidation is an important part of the game. In a world in which you see and are seen by a seemingly infinite number of strangers, with none of the natural filtration real-world encounters usually provide, you don’t necessarily want to be too inviting.

I’ve made the same point when my mother has worried that my nose rings are off-putting; this, too, met with failure. “Do you want to put anything in there to balance some of that?” she asked, referring to my profile’s apparently very daunting energy. “You like to read?” she suggested. “You’re musical? You have a stable job and live in a stable home?” (Reader, I have four roommates — not exactly the picture of mature stability.)

Then she read a line in my profile referencing a mass naked bike ride I went on. “Well, you’re doubling down on the quirky, but at least you’re saying that you’re sexually open with this uh, nudity comfort level,” she offered; I cringed. (I also don’t think nudity is inherently sexual!)

But she also had some useful critiques, such as that using my author photo from the Forward is a waste of a slot, since whoever I’m matching with can probably Google me and see it on this very website.

More surprisingly, she had a pretty good grasp on who and what I’m looking for, and she only made one remark about how she wished I’d go for someone a bit more stable and practical than I myself am. She said she’d be on the lookout for “someone who is quirky, individualistic, independent, a risk-taker, an adventurer,” which matched my own description surprisingly closely.

But when’s the last time you heard a mom say she wanted more risks in her kid’s life? “Well, I’m not an idiot!” she said, when I pointed this out. “My worry would be that I’d pick someone too conventional for you.” 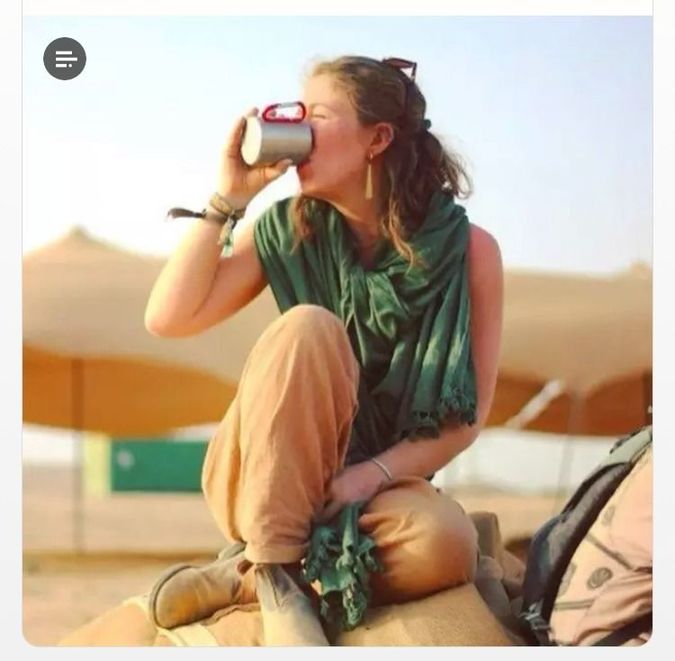 One of the offendingly intimidating photos of me, rather dirt-encrusted, at the Midburn festival. Photo by Noa Ozer

This brought up what my mom felt was a flaw in the platform — the moms. When she described the profile she’d create for me, she pointed out that she had highlighted my job and avoided mentioning the time I spent living in a hostel or any of my similarly grungy exploits.

“You have to attract the mom first, and the moms may be looking for very different things,” she said. “The person that I think you want is exactly the person that the mother isn’t going to describe.”

After some thought, however, she changed her mind. “We’re talking about living your life with someone here, which is not the only goal of dating,” she said, reminiscing fondly about what she called her “dating machine” days in her twenties. “I don’t think you have to be so goal-oriented about it. I’m not picking the guy who is going to put a ring on your finger.”

This was a surprise to me, given that several years ago, when I announced that I thought I’d break up with my (now ex) boyfriend, my mother immediately started nagging me to settle down, worrying that all the good ones would be gone. She assured me that was still a concern of hers.

“You gotta get out there,” she told me, and talked me through some strategies for asking out guys at my climbing gym.

But overall, my mom didn’t really want more control over my dating life — she just wanted to know more about it. She liked the idea of JustKibbitz because “it will give moms a real opportunity to have conversations with their children about what their children’s hopes and dreams are.”

She paused, and stared directly at me through the webcam. ”So what are your hopes and dreams?” she asked.