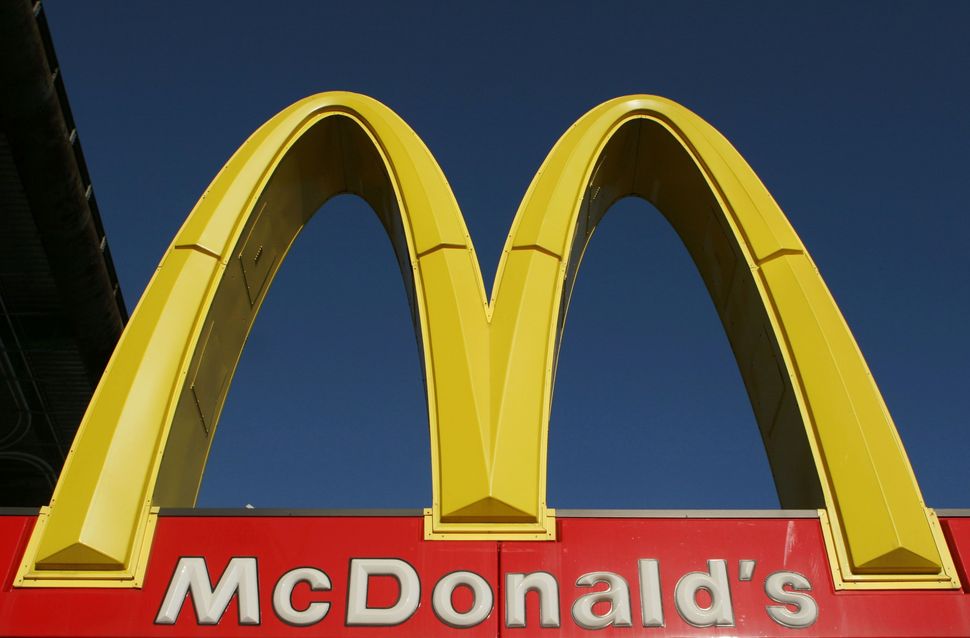 After a 22-year run, the bagel as a staple of McDonald’s is no more. At the start of the pandemic, the fast-food chain pivoted to focus on drive-thru and takeout service, removing over 100 menu items. As dining rooms in the United States reopened in the summer of 2020, many items returned. The bagel, however, did not make the cut.

McDonald’s wasn’t the first to mass-produce bagels when in 1999, it debuted Ham, Egg & Cheese; Bacon, Egg & Cheese; and Spanish Omelet bagels. The Lender’s factory had churned out frozen bagels for decades, and two years before, Dunkin’ convinced the masses that a blueberry bagel was a healthy substitute for a doughnut. But given the size of McDonald’s — 39,000-plus locations in 120 countries — the burger giant spread the Jewish bread wider and farther than ever before.

The McDonaldization of the bagel is either the acme or the nadir of Jewish food. Once only hand-rolled and boiled in Jewish enclaves, the niche nosh reached world fame, albeit as a dull steamed alternative to a hamburger bun. But even if you recoil from the “Boston Bagel” filled with bacon, egg, cheese, and avocado found in Australian McDonald’s, how do you interpret it being canceled? Is the bagel no longer worthy of cultural appropriation?

The Bagel at a Crossroads

The appetite for bagels hasn’t waned during COVID-19.

“Bagels had a very nice year,” said John Unrein, the editor of the trade publication Baked Magazine. What changed is that workers stayed home.

“Breakfast out got real slammed,” Unrein explained, but people kept eating bagels. Moreover, he found that in June 2021, domestic supermarket bagel sales had increased by 16 percent over the previous year, and artisanal bagels had fared well. Still, he sees the end of the McBagel as significant. “McDonald’s, when they do make a decision,” he said. “It’s enormous. It has a tremendous influence on the world. They’re the leader.” Indeed, Chick-fil-A discontinued their bagels earlier this year.

With the fast-food bagel in retreat, the Jewish breakfast is at a crossroads. Does it return to its hard-boiled immigrant roots or remain an empty vessel for crispy bacon and mysterious “breakfast sauce”? But before I ponder the McBagel as a metaphor, I must admit I have never tried one. I had thought the brief 22-year window of opportunity had passed. Then I found McDonald’s bagel fan groups on Facebook. 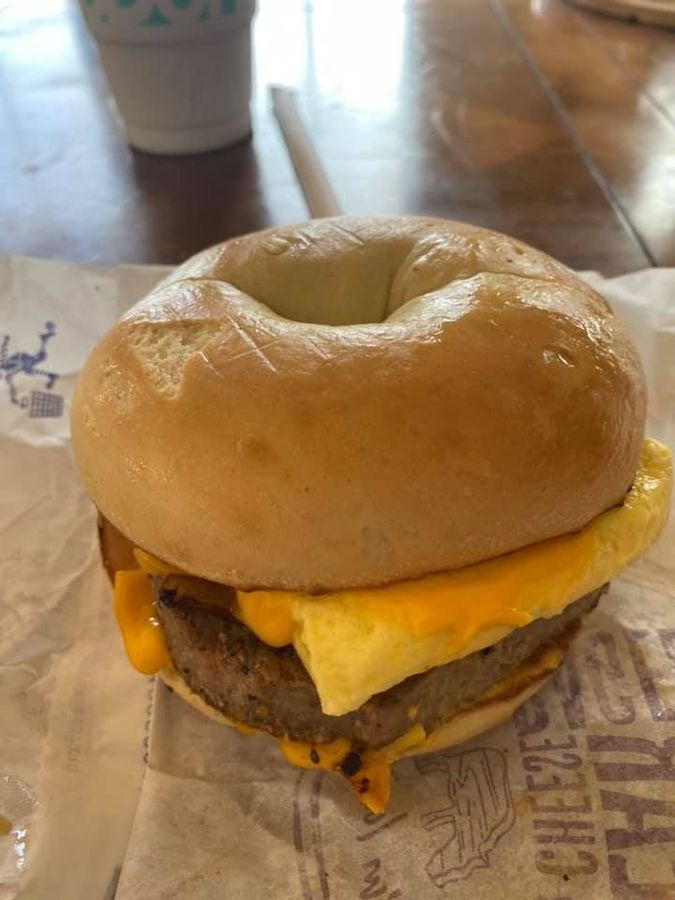 Taking Matters Into Their Own Hands: Many disheartened McBagel fans are sharing recipes so they can make their own version of the discontinued sandwich. Courtesy of KeShanna Brooks

In the group “Bring Back The Steak, Egg and Cheese Bagel,” 1700 loyalists post screenshots trolling McDonald’s official social media, link to YouTube videos of copycat recipes, and most important, share intel on sightings of the near-extinct sandwich. According to McDonald’s, restaurants in select markets, including Chicago, Washington and Baltimore, can choose to carry bagels. Internationally, Canadian, German, and Taiwanese McDonald’s hang on to their bagel options. The rest of the world is a McBagel void.

I asked the group what made the steak bagel so special. Since this was the internet, one person digressed into a conspiracy theory that the chain’s only Jewish food items disappeared because of the Jews before another poster pushed back. In the end, six dozen people across the country sang the praises of the peppery “white breakfast sauce,” the sautéed onions, and the quality of the beef.

“It is their best sandwich, hands down,” wrote one poster from Illinois, and two expecting mothers bonded over their shared pregnancy craving.

Online McDonald’s bagel support communities began to crop up five years ago when the fast-food chain let individual restaurants decide what bagels to offer. The following year, an Ohio man pulled a gun at a drive-thru that didn’t have the steak sandwich. Steak, Egg, & Cheese Bagel fervor is real. Still, I wasn’t convinced enough to buy a New York-Baltimore bus ticket and give it a try.

I’m picky with New York bagels. The term “bagel sandwich” makes me uncomfortable. A bagel must be boiled and should be topped with cream cheese, smoked fish and not much else. This might make me an elitist, but it’s different from not eating a Big Mac or only drinking third-wave coffee. For millennia, Jewish cuisine was born through the blending of local traditions and biblical rules. Food no longer has to be kosher to be Jewish, but there are unwritten rules — and McDonald’s bagels, like the “New York Bagel Supreme” found in the Netherlands — violates them. It’s not a religious conviction. It’s that double beef patties, bacon, cheese, and coleslaw on soggy bread just doesn’t feel Jewish (or sound any good).

My commitment to bagel orthodoxy might sound superficial or nostalgic. It’s what Irving Howe in the 1970s called “bagel and lox Jewishness.” He defined it in “World of Our Fathers” as a “residual attachments to foods, a few customs and a garbled Yiddish phrase.” Still, I’d rather be a bagel-and-lox Jew than a bagel-and-steak Jew. Like many, my Jewishness boils down to a boiled bagel.

Was the McDonald’s Bagel Even Really a Bagel?

For Peter Reinhart, a chef-instructor at Johnson & Wales University, the preference for a tough-to-chew boiled bagel is not necessarily a principled choice. A traditional bagel with its hard, blistered crust is something you have to grow up with to appreciate, said Reinhart, whose bagel recipes have appeared in The New York Times, Epicurious and National Geographic.

Steamed bagels, like those sold at chains, are lighter and airier, making for a more marketable product. “Once bagels became softer and easier to eat, they became much more sandwich-friendly,” said Reinhart, who is also a James Beard award-winning baker. “In this country, people are used to having their bread be soft and a good carrier for what’s inside the bread.” 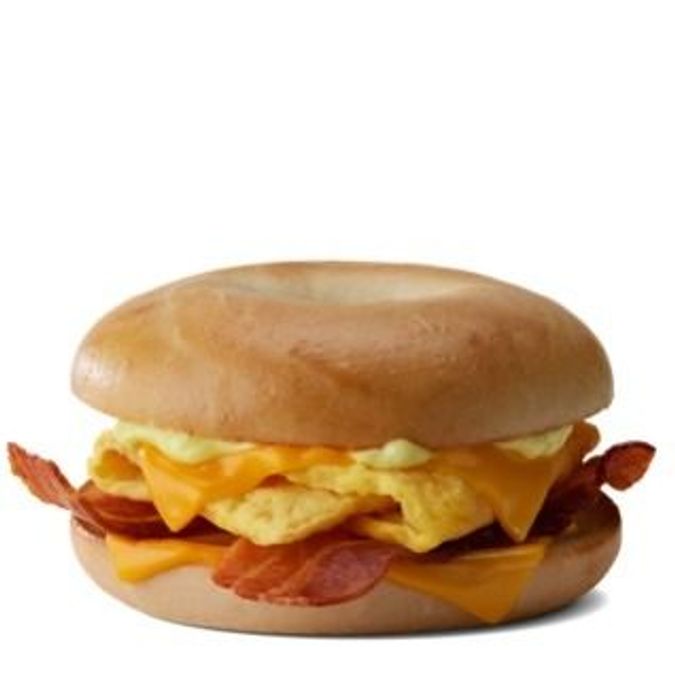 The Apex or Nadir of Jewish cuisine: The McDonald’s bacon, egg and cheese bagel is going the way of the McDLT. Courtesy of Courtesy of AMC, McDonald's

Indeed, die-hard online McDonald’s bagel fans rarely discuss the actual bread. When they do, they praise it as “soft” and “fluffy,” which they find a better fit for a sandwich than the crumbly McMuffin. Nothing like the beloved hard-crusted New York bagel I teethed on as a toddler.

This phenomenon isn’t limited to the United States. Rachel Moeller, the owner of the Parisian bakery Rachel Cakes, told Vice magazine in 2017 that her French customers disliked her traditional boiled bagels. “They asked if they could be more like a baguette!” For them, bagels are synonymous with over-stuffed American-style sandwiches. In France, and most elsewhere, a bagel is a lunchtime indulgence, not a breakfast food. Perhaps this is a result of the fact that many people’s first encounter with the Jewish bread is a McDonald’s bagel burger.

The Work of the McDonald’s Bagel Is Complete

It didn’t have to be this way.

“The names of the first bagel cafes were meant to evoke Jewish life,” wrote food writer and scholar Darra Goldstein in her 2005 article, “Will Matzoh Go Mainstream,” which traces the history of corporate bagels. Earlier chains like Noah’s Bagels gave vast swaths of Americans their first taste of Jewish food, even if not the most authentic. Later chains, however, presented the bagel not as Jewish but as quintessentially New York. Dunkin’, for instance, rolled out their “low-fat” bagels in 1997, with former mayor Ed Koch showing viewers how to schmear like a New Yorker. 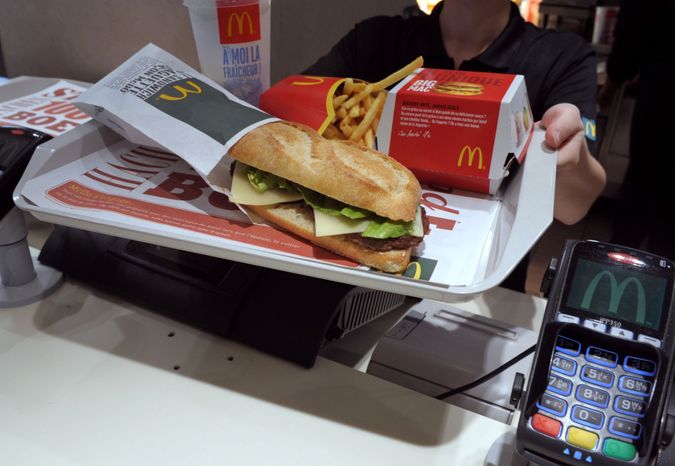 Cultural Appropriation? The McDonald’s bagel is far from the only instance in which the fast-food chain co-opted a culture’s cuisine. For example, France’s McBaguette. By Getty Images

McDonald’s followed the lead of their competitor, Burger King, which in 1987 first put ham in their “soft bagel” — not something authentically New York or Jewish. A Burger King representative at the time explained to the Los Angeles Daily News, “We don’t see bagels as an ethnic product at all anymore.”

With McDonald’s, the Americanization of the bagel would be complete. It would join the Big Mac as a symbol of America around the globe. Still, more people eating bagels, even bad bagels, doesn’t have to be a bad thing.

“McDonald’s and others helped elevate awareness. People now know what a bagel is,” Unrein said. This exposure has helped not just the squishy supermarket bagels, but also high-quality artisanal ones.

“We’re seeing a resurgence of traditional boiled bagels,” said Reinhart before heaping praise on Korshak Bagels in Philadelphia, which opened in 2020 — one of several new bakeries around the country that he thinks can compete with New York’s best. The author of a dozen bread books sees this as the natural progression. “The steam bagel plateaued 10 years ago,” he said. “It accomplished what it needed to accomplish.”