In 1961, a shameful moment when the horrors of WWII seemed to be returning 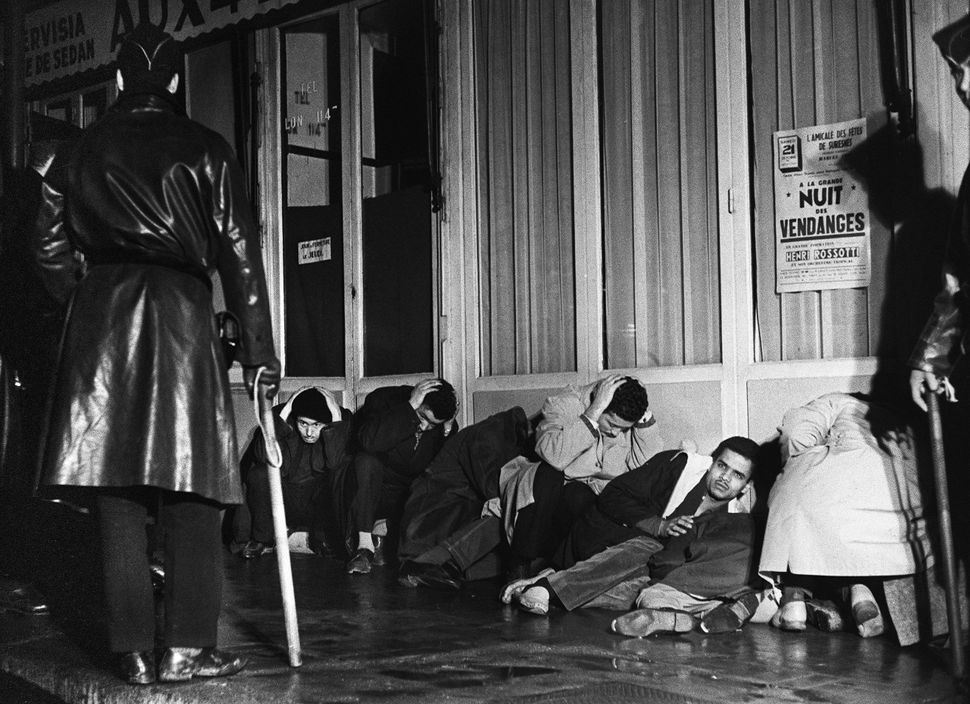 In Puteaux: Outside Paris, demonstrators with their hands on their heads, are arrested during a march gathering between 20,000 and 30,000 pro-Front de Liberation Nationale (FLN) Algerians, and guarded by policemen outside a police station. By Getty Images

This past weekend, Paris marked the 60th anniversary of one of the darkest moments in its recent history — a terrible moment that reminds both French Muslims and French Jews of their fragile place in France.

On the evening of October 17, 1961, more than 20,000 Algerian immigrants boarded suburban trains and buses to meet in central Paris. Their goal was to march along the city’s boulevards to show their support for Algeria’s independence from France. The two countries had been locked in a bloody conflict that had cost the lives of tens of thousands of not just Algerian militants and French soldiers, but also Algerian and French civilians. The conflict had become known as la sale guerre, or dirty war, an epithet that described the brutal and indiscriminate violence used by both sides.

Tellingly, it was also called la guerre sans nom, or nameless war. Algerians knew they were fighting a war of independence, a fact accepted by the world, France excepted. Ever since the mid-19th century, France insisted that Algeria, unlike its other colonies, was as much a part of France as Provence. The difference, though, is that the Provençals were French citizens while Algeria’s several million Arab and Berber Muslims were not. For this reason, French leaders had always insisted that dealing with Algerian nationalists was a domestic affair, an internal matter for the government to police. Quite literally.

When the Algerian demonstrators — women and children along with men young and old dressed in suits and ties — began to form in peaceful columns that evening, the riot police, under the orders of the police prefect Maurice Papon, responded with extraordinary violence. Wielding not just batons but also guns, they charged, without provocation, into the long files of demonstrators. Some units wildly swung their batons as they rounded-up thousands of frightened civilians, who were herded into buses and delivered to mass holding centers.

Other units of the riot police pursued those Algerians who tried to flee into side streets and metro stations. Dozens of unarmed Algerians were beaten or shot to death, their bodies then thrown into black vans or into the Seine. Reminiscent of an earlier war of religion, when Catholics threw the bloody corpses of Protestants into the river during the 1572 massacre of Saint Bartholomew’s Day, the bloated corpses of Algerians were fished out only days, even weeks later. 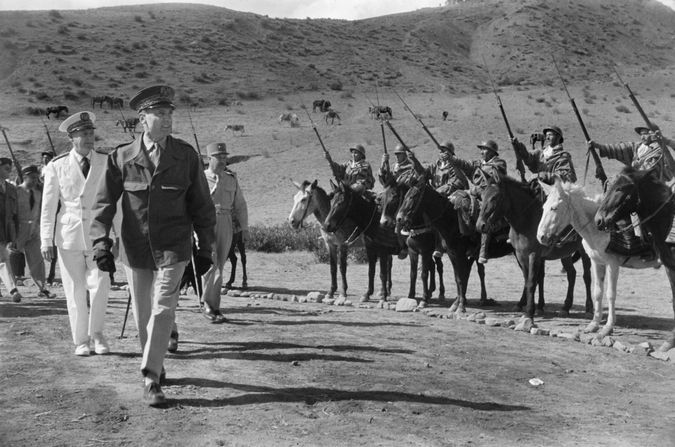 Algeria, 1956: During the Algerian War of Independence, the Inspector General of Administration, Maurice Papon (1st plan in the center) accompanied by General Roger Noiret (D, background), commander the troops of Constantine and General Dufourt (G), commanding the operational zone of Kabylia, reviewing a horse harka during his visit of several mixed communes of the new department of Setif.

By the end of the atrocities, the body count numbered at least 120. The official report released the next day, however, announced that just three protestors — all labeled aggressors — were killed in the line of duty. Remarkably, the real numbers, along with accounts of the massacre, were suppressed by successive governments for the next 20 years. It was only the relentless research by historians like Jean-Luc Einaudi that the dismal truth of events that night finally came to light.

It took another two decades for a French president to acknowledge the state’s role in this affair. On Saturday afternoon, President Emmanuel Macron stood in silence in front of a funeral wreath that had been placed on a bridge that had become one of the crime scenes 60 years ago. In an official communiqué released on the same day, Macron declared that “the Republic finds inexcusable the crimes committed that night under the authority of Maurice Papon.”

Macron’s pronouncement left Algerians divided. Some lauded the integrity of his words, while others lamented their insufficiency. Instead of apologizing on the state’s behalf for this crime, critics declared, Macron instead assigned it to Maurice Papon, who was the police prefect at the time. Political reasons undoubtedly dictated Macron’s choice of words. But it is no less indubitable that, for historical reasons, those same words were all too accurate.

Papon happens to be a pivotal figure in the histories of Algerian Muslims and French Jews. In 1981, 20 years after the massacre, the French newspaper Le Canard Enchaîné shocked the nation. The paper revealed that Papon, who was now serving as a budget minister in the government of Valéry Giscard d’Estaing, had, as the prefect of Bordeaux, organized the round-up and deportation of nearly 1,700 Jews to Auschwitz in 1942. After a 14-year struggle to bring the case to court, Papon was finally tried and found guilty in 1998 for complicity in crimes against humanity.

According to Robert Paxton, one of the historians who testified at the trial, Papon was a “fairly important cog in the wheel” of France’s role in the Final Solution. It turns out this cog, having benefitted from his experience rounding up Jewish immigrants in Bordeaux, applied it as an even more important cog in the rounding up and murder of Algerian immigrants in Paris.

In their landmark work “Paris 1961: Algerians, State Terror and Memory,” the British historians Jim House and Neil McMaster argue that Papon employed the same administrative and police measures enacted against Jews in Vichy France — which included discriminatory laws and compulsory censuses — against Muslims in republican France. One of the differences is that while Papon did not order his police to shoot in 1942, in 1961 he gave his officers carte blanche to use their guns.

But there is another and equally disturbing difference. In a courageous speech he gave in 1995, President Jacques Chirac acknowledged the French state’s guilt for its role in the death of more than 70,000 French and foreign Jews during the Occupation. And yet, despite the active role played by the French state in 1961 in supporting Papon’s repression of the Algerian demonstration, and its subsequent suppression of the truth of this event, Macron’s communiqué, while marking a step forward, still falls shy of the step that is now called for.

In 1961, a shameful moment when the horrors of WWII seemed to be returning