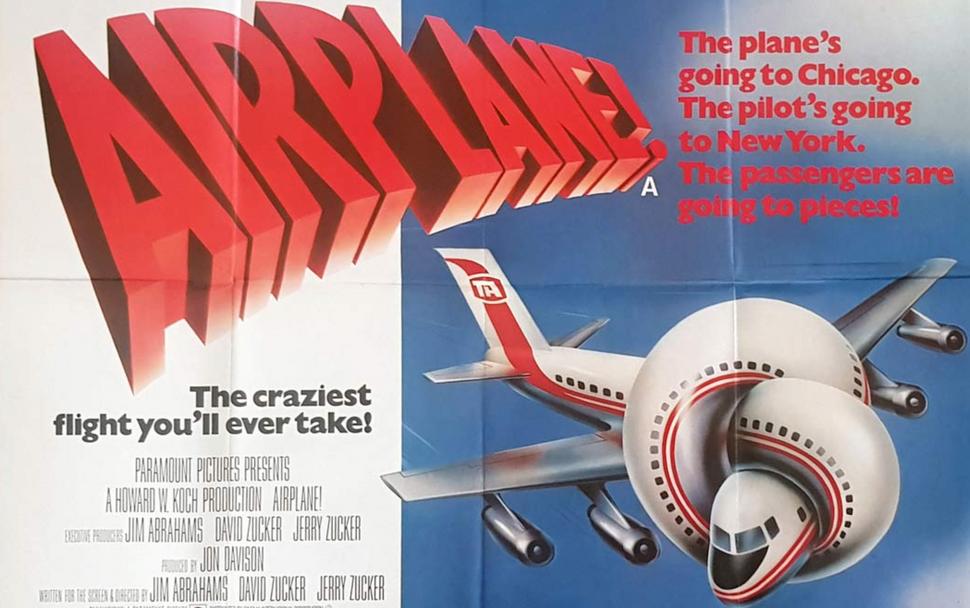 In a lengthy essay published in the New York Post, we learn that filmmaker David Zucker was recently asked an inane question at an anniversary screening of his 1980 film “Airplane!”

“Could you make ‘Airplane!’ today?” an audience member asked.

Zucker’s response was, “Of course, we could. Just without the jokes.”

Really? Is there a big market right now for films spoofing the genre of airplane-based disaster flicks from the 1970s?

Of course, I am being as obtuse as Zucker is being glib.

The crux of Zucker’s argument, which will also run in the November issue of Commentary, that approximately 9 percent of America’s population has gagged the free expression of comedy writers and directors. But the fact that Zucker still thinks “Airplane!” and all of its jokes could work today, but for the naysaying of studio executives frightened of a Twitter mob, shows him to be alarmingly out of touch for someone with a reputation for mining topical humor.

Zucker gives an example of an “Airplane!” joke that wouldn’t fly in 2021: The “jive talkers,” two Black passengers who speak in an exaggerated form of jazz slang, and who are accompanied by overly wholesome or (“white”) subtitles translating their dialogue.

“I’ve lost count of the number of people who have said to me, ‘You couldn’t do that scene today.’”

Why would anyone want to? Are we making an insensitive period piece — or worse “Soul Plane?”

While Zucker goes on to enumerate — really speculate — which of his jokes would pass muster today, among them Lloyd Bridges’ increasingly bizarre addictions (“I picked the wrong week to stop sniffing glue”) and the homoerotic cockpit patter of Peter Graves and a child passenger, I was thinking of another Zucker project, “The Naked Gun.”

I love the movie, but there are a couple of things that make it a tough watch today.

The first is the opening where a group of — now mostly dead — world leaders meet in a smoky room to discuss how best to humiliate the Americans.(A muezzin’s call to prayer confirms we are in the Middle East.) We have a white guy dressed like Yasser Arafat. The Ayatollah orders a terrorist attack, before getting decked by Leslie Nielsen’s Detective Frank Drebin.

The second thing that makes a rewatch difficult is that O.J. Simpson has a sizeable role in the film.

Both instances are casualties of us knowing a bit more now — about cultural sensitivity and about a celebrity — than we did before. That’s nothing to be afraid of, and Zucker’s suggestion that comedy itself is “scared” of backlash is just an argument for it to be made of sterner, or at least more adaptable, stuff. (You also might have difficulty producing a minstrel show today — or, more to the point of Zucker, poking fun at a decades-old coffee commercial.)

In Zucker’s films, many of the jokes that fall flat now were doomed to die anyhow, too topical to endure and too problematic to bear remembering. The gags that still make us laugh work as jokes outside of their immediate context — and what comedy writer worth his salt doesn’t want something that stands the test of time?

Which brings me to another issue with Zucker’s argument: it’s a straw man that has no real bearing on the comedy landscape today. It’s tough to say what prompted his essay, but I assumed, for lack of a better peg, that Dave Chappelle’s recent special was behind it.

Yes, the special that we now know cost Netflix $24.1 million and which Ted Sarandos is defending despite anger in his ranks over the stand-up’s screed about trans people. The same special has jokes about violence against Asians and what some have identified as an instance of Holocaust inversion. The special remains on Netflix.

This is different, of course, than the edgy Hollywood comedies Zucker laments losing, but in that lament Zucker ignores other factors that have nothing to do with political correctness, namely the new nature of a film industry that left spoofs behind over a decade ago anyhow.

While some creators — Zucker cites Todd Phillips and “Chernobyl” creator Craig Mazin — grouse or move on, Joe Rogan has lined his pockets with a Spotify deal. Louis CK still commands a crowd. The determinedly un-PC “Curb Your Enthusiasm” is about to air an 11th season.

Focus group-obsessed studios may be cagey when it comes to comedies, but, news flash, the big five studios are no longer the tastemakers they were in Zucker’s day. His formulation is as old and stale as jokes about Gorbachev’s wine stain.

Fundamentally, Zucker is right. The comedy he’s championing is afraid — of change.