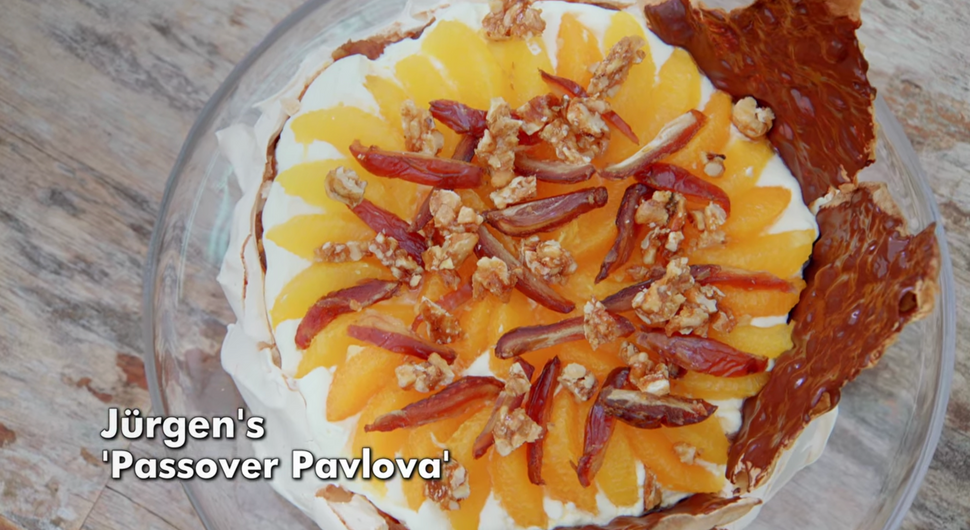 An actually kosher-for-Passover dessert on the Great British Bake Off?! Image by Screenshot from NETFLIX

“The Great British Bake Off” is the most comforting television around; it was my balm in the early pandemic lockdown. Crisp accents, bad British humor, the low-stakes drama of cakes coming out stodgy or tarts ending up with soggy bottoms — nothing more calming. Except when the show takes on Jewish foods.

Last year, the judges insulted the traditional decadence of New York City babka, saying it’s “not nearly as nice” as the lightness of their own version. In a different season, judge Paul Hollywood bemoaned the fact that no one made “plaited loaves” anymore, ignoring the long history of challah. (This should not be surprising given that a challah recipe, called “cholla bread” in one of Hollywood’s cookbooks, was recommended as a traditional Passover food.) 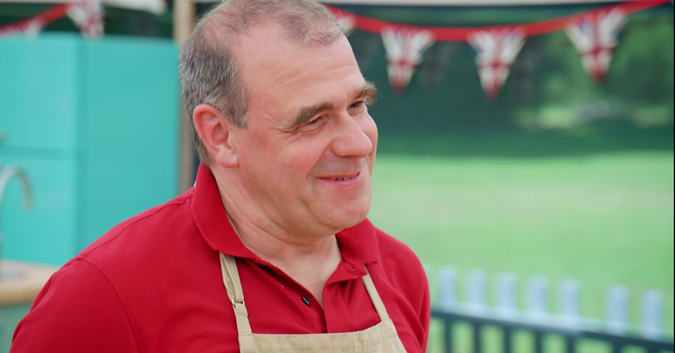 Our hero Jurgen, look at that cute smile. Image by Screenshot from NETFLIX

But this season is looking up for the Jews. Jurgen Krauss, a self-effacing, middle-aged German man with a predilection for carefully engineered bakes, included chocolate-covered matzah in his entry to the pavlova-focused Signature Challenge in the most recent episode; the dessert was inspired by celebrating Jewish holidays with his Jewish wife and children.

OK, perhaps matzah isn’t the food we’re most proud of as a people — it’s beautifully symbolic and everything, but no one who eats it for a week is particularly enamored of its culinary merits. Still, at least it’s some actual representation. The matzah pyramids loom over the charoset pavlova as the judges slice in.

Pavlovas, a type of filled meringue dessert, are naturally kosher for Passover because they are made of whipped egg whites and sugar. Krauss decided to embrace this with a creation titled “Jurgen’s Passover Pavlova,” filling the pavlova base with vanilla cream and a Sephardi-style date and orange charoset — or, as the show’s narrator called it, a “symbolic SHAR-oh-set paste” — and decorating with large, triangular shards of chocolate-covered homemade matzah, shaped to represent the pyramids. (His pavlova was juxtaposed with another contestant’s Easter-themed creation.)

Krauss briefly explained the symbolism of charoset as mortar to the judges who, of course, couldn’t let a traditional Jewish food pass by without suspicion. “Dates are going to be interesting in this,” said Hollywood, narrowing his eyes; judge Prue Leith pointed out that both dates and meringues are very sweet.

But Hollywood and Leith were pleasantly surprised when they tasted the creation. “That is so unusual,” said Leith. “You get the dates first, and then the orange. I would have thought it wouldn’t have enough acidity, but it does.”

The flavor combination is not particularly unusual at all, though — as Krauss made clear — charoset is a traditional food, and while the Ashkenazi Seder usually features one based on apples and sweet wine, the Sephardi version sensibly relies on flavors, such as dates, that are more common in the Mediterranean. In fact, dates and oranges are a common flavor combination throughout the Levant. The judges, moments before the shocking discovery that charoset tastes good. Image by Screenshot from NETFLIX

The judges, who complimented Krauss’s dish, wouldn’t have been so surprised if they could learn to trust traditional wisdom. Traditional recipes have been perfected over the years, and of course Jews have learned to balance flavors so that charoset isn’t cloying. Yet the judges didn’t engage with the history and tradition behind the dish, joking that Krauss’s dish was “carrying a lot” in response to his explanation of the Jewish meaning behind his recipe.

It’s not only Jewish traditions that the judges tend mistrust. While South Asian contestants have done well on the show, judges often warn them not to use too much chili, or rosewater, or cardamom, or various other traditional flavors Hollywood and Leith find overwhelming. (Meanwhile, when bakers add too much booze to a dessert, the judges frequently scold them with a chuckle and say that they like to indulge in a bit too much rum or schnapps.)

Last year, a “Japanese Week” episode drew outrage for assigning challenges based on dishes that were Chinese instead, as well as contestants’ attempts to customize their dishes with untraditional flavors from other Asian countries.

Yet when challenges have involved traditional British or Western European dishes — game pies, for example, or Swedish cardamom buns — they have been meticulously researched and carefully contextualized, the judges explaining the history and ingredients of the dish to the viewers; during Victorian Week in season six, for example, judges reprimanded several contestants for using spices that would not have been available during that era.

Tastes can vary, of course, and judging food isn’t an objective art, but you are obligated to do your best to judge on skill, technique and flavor balance instead of personal preference. Flavors that have survived the centuries have likely done so for a reason. Even blood pudding.