Why does the ‘Great British Baking Show’ keep messing up Jewish breads? 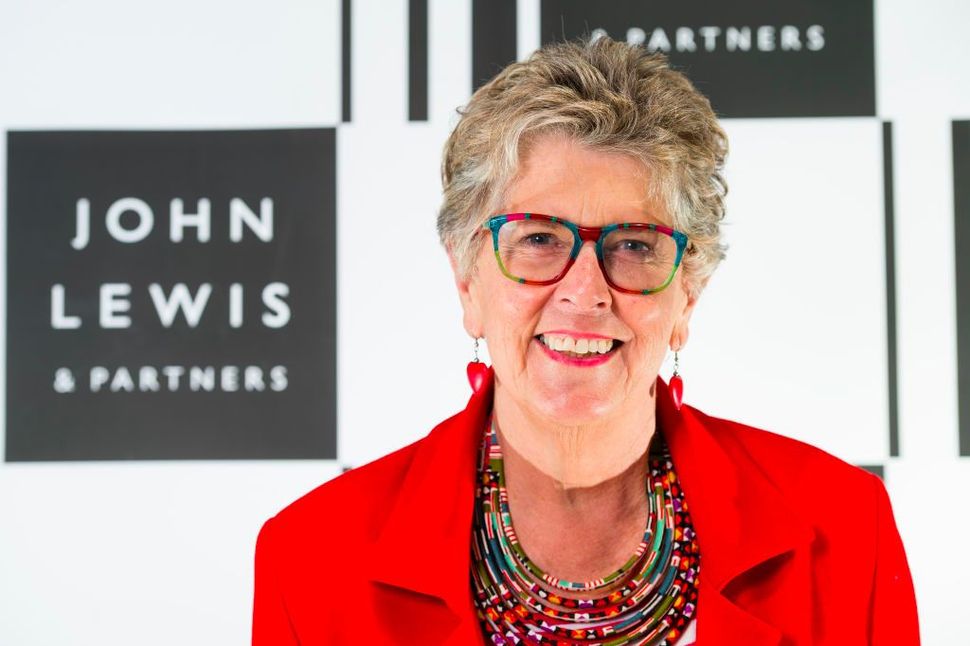 Prue Leith, a woman who simply does not understand babka. Image by Getty

“The Great British Baking Show” is supposed to calm you down. With its bespectacled judges and decidedly low-stakes narration — “For some bakers, bread is a new challenge” — it’s earned a reputation as a self-soother for the pandemic era. At a time when reality increasingly resembles dystopian prestige TV, “The Great British Baking Show” is one of the few options on Netflix that can still be termed escapist.

But just as Jews would need Tums on hand to enjoy most of the show’s creations, it looks like we’ll have to pop some Xanax to make it through the current season, given the serious shade judge Prue Leith just threw at our favorite Jewish bread.

In case you missed it: She said she’s just not that into babka from New York City.

In the show’s latest episode, contestants were asked to make a chocolate hazelnut babka as part of a series of chocolate-themed challenges. For the British bakers, the challenge created confusion: A contestant named Dave said he’d “never heard of one,” while Linda fretted that she “wished she knew what it looked like.”

What must it be like to be a citizen of the country that invented spotted dick, whose citizens have apparently never encountered the gleaming pile of saturated fats that is a well-constructed babka?

We pitied the bakers, but the final blow to our dwindling post-Megxit goodwill towards the Commonwealth came when Leith tasted the sample chocolate hazelnut babka created by fellow judge Paul Hollywood. “It’s lovely, much lighter than I thought it would be,” she said, tucking into a thinner slice than has ever been seen on a Jewish breakfast table. “I have had it in New York, and it’s not nearly as nice as this.” (Italics and associated rage are ours.)

A sweet braided bread originating in Eastern Europe, babka is described by Wikipedia as “popular in the Jewish diaspora.” That’s a nice way of saying it’s a caloric extravaganza through which our elders transmit cultural knowledge and an inescapable reliance on emotional eating. While New York isn’t the birthplace of babka, it’s here that Jews replaced Old World fillings of seeds and nuts with the chocolate and cinnamon on which we gorge today. So when she dissed New York babka, Leith was dismissing the culture that created it.

Reached by the website Insider for comment, Breads Bakery, one of the city’s foremost purveyors of babka — they pioneered the chocolate-hazelnut flavor combo that Hollywood copied — diplomatically refrained from telling Leith to choke on her non-tristate-area pastries. Instead, owner Gadi Peleg invited her to pay the bakery a visit, where she can “taste Breads Bakery’s babka, right out of the oven, as they come out all day, every day.”

On social media, the show’s Jewish viewers were less tactful.

“IVE HAD IT IN NEW YORK AND THIS WAS BETTER”

I CAN ONLY TWEET IN ALL CAPS I AM SO ANGRY

Prue suggesting that Babka she had in New York is not as good is frankly blasphemy.

This isn’t even the Jewish people’s first beef with the show’s take on a Jewish bread. Back in 2018, Hollywood asked contestants to create a “plaited loaf,” which sounds fancy but is actually just an eight-stranded challah. Though challah is basically its own food group for millions of Jews around the world, the judges described braiding as a “skill which is dying off,” evidently in need of preservation by skilled British bakers with no Jewish friends.

“This is a great thing to make for a festive occasion,” observed “Baking Show” stalwart Mary Berry — umm, like Shabbat, the festive occasion that happens 52 times a year?

But Paul’s wide-eyed wonder over the novelty of braided bread shouldn’t really surprise anyone. In his 2012 cookbook “How to Bake,” he proffered a recipe for something called a “cholla loaf,” ostensibly created by a Jewish friend named Sylvia Woolf. Paul correctly noted that challah is a “traditional Jewish loaf” — but he also said it was most commonly served on Passover.

And let’s not forget the show’s periodic forays into bagels. During a challenge last week involving rainbow bagels, an abomination that should not exist, Hollywood called the crispy — a.k.a., ideal — exterior of one contestant’s creation “overdone,” causing the Nosher to question whether he “has ever visited New York City, or even tasted a bagel.”

Are Leith’s comments the worst aspersions cast against New York Jews? Unfortunately, no. Do we think they share the potentially antisemitic undertones of Ted Cruz’s “New York values” jibes? Not really — it doesn’t seems like anyone associated with the “Great British Baking Show” knows enough about Jews or New York to effectively deploy a dog-whistle. Still, it’s aggravating to see a beloved dish featured on a beloved show, only for a judge to insist she can do it in a better and more refined way than the people who have honed the recipe for centuries. Whether you get yours from a bakery or bubbe’s kitchen, you can find any kind of babka you want in New York: light, dense, fluffy, succulent, or any kind in between.

And who wants light babka, anyway? Babka is more than the sum of the hazelnuts twisted into its core: it’s a whole-body experience of emotional nourishment and physical disquiet, one that you just can’t enjoy while nibbling off a china plate on a manicured British estate.

So here’s my invitation to Leith: Come to New York City on a rainy day. Experience a personal or professional crisis that can only be resolved by ingesting 800 extra calories before dinner. Head to your nearest legacy appetizing store and purchase a Saran-wrapped slice of babka thicker than Timothée Chalamet’s neck. (Do not, under any circumstances, remember to take napkins.) Consume the babka while sidestepping exploded garbage bags or sitting in a stalled subway car with no cellphone reception — extra points for landing crumbs on your neighbors. Savor the palpable pit that will form in your stomach and remain there for at least 24 hours.

If you’re not eating it like that, are you even eating babka?

Why does the ‘Great British Baking Show’ keep messing up Jewish breads?