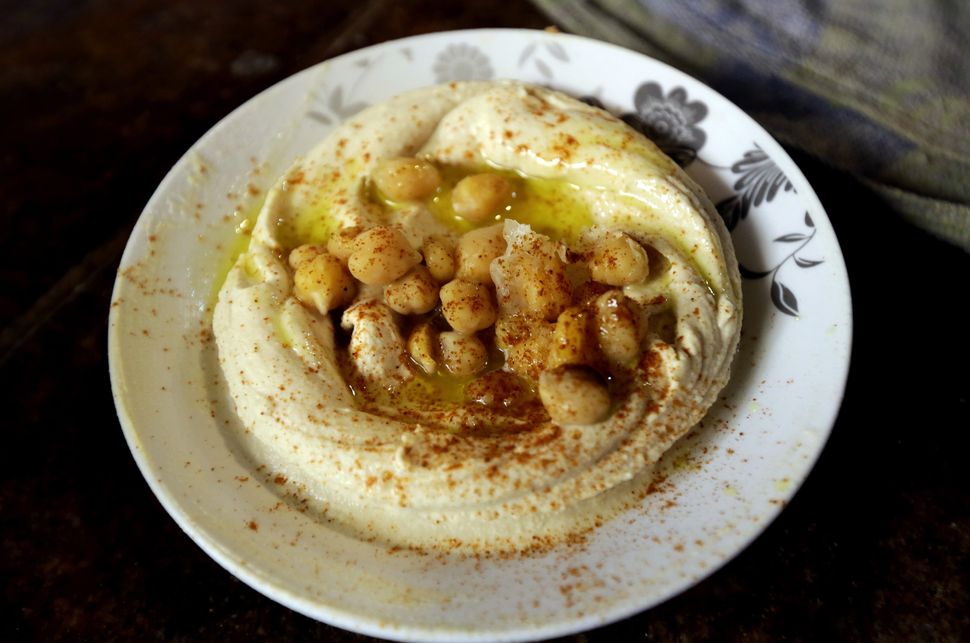 A plate of hummus By Getty Images

Hummus, the dish of cooked chickpeas, tahini, lemon juice, garlic and spices is a national favorite in Israel and across the Levant. Cherished alike by diners of different faiths, hummus became the unlikely center of so-called Hummus Wars in 2008, when a proprietary spat arose between Lebanese and Israeli restauranteurs. This and related matters are discussed in “Hummus: A Global History” by the U.K. author Harriet Nussbaum. Recently, Benjamin Ivry spoke with Nussbaum about some of the controversies involved.

Your book mentions that the Israeli journalist Meir Shalev caused a fuss in 2007 with an article, “Hummus Is Ours,” citing a previous author, Menakhem Kapelyuk, whose fanciful etymology identified a biblical reference to hummus in The Book of Ruth. Since almost all Israelis admit that hummus is a centuries-old Arab invention and many prefer eating hummus prepared at Arab restaurants, was Shalev being disingenuous or just attention-seeking in making this claim, especially since Kapelyuk, who translated the Koran into Hebrew, never discounted Arab cultural achievement?

Yeah, I think there’s certainly something provocative in writing an article and calling it “Hummus is Ours,” [Shalev] was trying to get a certain reaction out of some people. But at the same time, he was expressing some scholarly curiosity in looking at the biblical verses and trying to see if something else could be understood. But approaching it in the way he did, there was an amount of looking for publicity.

Cultural historian Dafna Hirsch asserts that hummus restaurants, or hummusiyot, are largely “male territory,” because of working class origins of the hummusiya. Also, she claims, a heavy meal of hummus can lead to unladylike flatulence. Are few solitary women diners seen at hummusiyot in the Levant?

Right, well I suppose it depends where you are talking about. Obviously there are big cultural differences in the Levant. Maybe in Tel Aviv, you wouldn’t be surprised to see a woman eating alone at a hummusiya, whereas in other places you might be. Traditionally, some venues such as cafés have been male dominated, but that’s not something static, it changes. Today, if women are hungry and want to eat hummus, they should be able to go alone if they so wish.

Some Israeli consumers are impervious to the charms of hummus. In a story by the author Yehoshua Kenaz, a divorced father browbeats his young son, who hates hummus, in a hummusiya. The son is forced to eat the meal and later vomits. Does Kenaz’s fiction reflect an undercurrent of rebellion against the national icon status of hummus?

I haven’t encountered this in terms of an undercurrent. There are always individuals who don’t like it, but I don’t know of any anti-hummus movement.

Why did it take international cookbook writers so long to get this simple dish right? In 1950, U.K. author Elizabeth David suggested adding olive oil and mint to hummus, while in 1964, the Canadian author Molly Lyons Bar-David implied that hummus was a dish “from biblical times.” In 1968, Claudia Roden called hummus an hors d’oeuvre, and in 1974, Joan Nathan and Judy Stacey Goldman advised using canned chickpeas and serving it “well chilled.” None of this would pass muster today, but why all these wrong ideas, when the “First Lady of Israeli Cuisine,” Lilian Cornfeld was honored by food historian Yael Raviv for presciently insisting in “How Can We Cook in Times of War?” (1942) that plain Arab dishes like hummus should inspire Jewish cooks.

That’s exactly it. Some of the first recipes to appear were essentially aimed at audiences that were not really familiar with hummus, so it’s not terribly surprising that they were not the same as recipes we see today, when people eat hummus all the time and are familiar with it. However, Claudia Roden’s recipe is almost identical to what we see today. She says almost anything goes well with hummus. So people got the idea that they could add this to the table, so [Roden] was very much on point in the way she described hummus.

You claim to find a “definite flavor logic” to Nigella Lawson’s recent controversial suggestion to replace tahini with peanut butter in hummus. Can you see where purists might find the idea appalling?

I have never tried making [Nigella Lawson’s] hummus but when I lived in Berlin, I would eat Sudanese falafel with a peanut sauce, and it was absolutely delicious. So I figured that her hummus probably tastes wonderful, even if it is not much like the hummus we usually enjoy.

I think I have to agree with you; it’s terribly wasteful. And in this type of competition, there’s not much to be proved or gained if it does go to waste, so it’s not one I’m particularly fond of.

In a memoir by Israeli Air Force general Iftach Spector, a meal is described after the Six Day War in which a military officer offers unsolicited political advice, only to be scolded by Moshe Dayan for intruding in extra-military domains. After which, Spector recalled, “We lowered our eyes, humiliated, into the hummus on our plates.” Hummus is a humble dish, but does it necessarily humble those who eat it?

I don’t know. Obviously, traditionally it’s a simple dish, designed to be filling and nutritious, and it’s vegetarian, like most humble dishes, but I don’t know that the people who eat it become humble.

The cultural anthropologist Nir Avieli stresses that hummus is meant to be shared by fellow diners as a modern urban dish. It’s Arab working class food that is “not farmers’ fare.” Avieli also asserts in “Cooking Cultures” that sharing hummus is a “first step toward peace in the Middle East” as a “practical invitation to initiate a cultural process that may turn foes into friends,” since “one shares hummus with relatives and friends and not with strangers.” Do you share his optimism, also expressed by the novelist Amos Oz, that Arabs and Jews may one day unite over a love for hummus?

Yeah, absolutely, I think hummus has great potential to be that kind of unifying food partly because it’s so popular across geographical regions, social groups, and people of all ages. It’s also a food not dictated by dietary laws, made entirely of vegan ingredients, so there’s no question of any part of it being forbidden to any religious group. It has this great quality in that you sit around the table with friends and dip the bread and form a social bond, really sharing something. There’s important symbolic meaning there, to break bread together. Practically speaking, there would have to be a lot more work before the hummus could be shared, but I think we can say it holds that potential.