What the humble chickpea can teach us about quantum physics 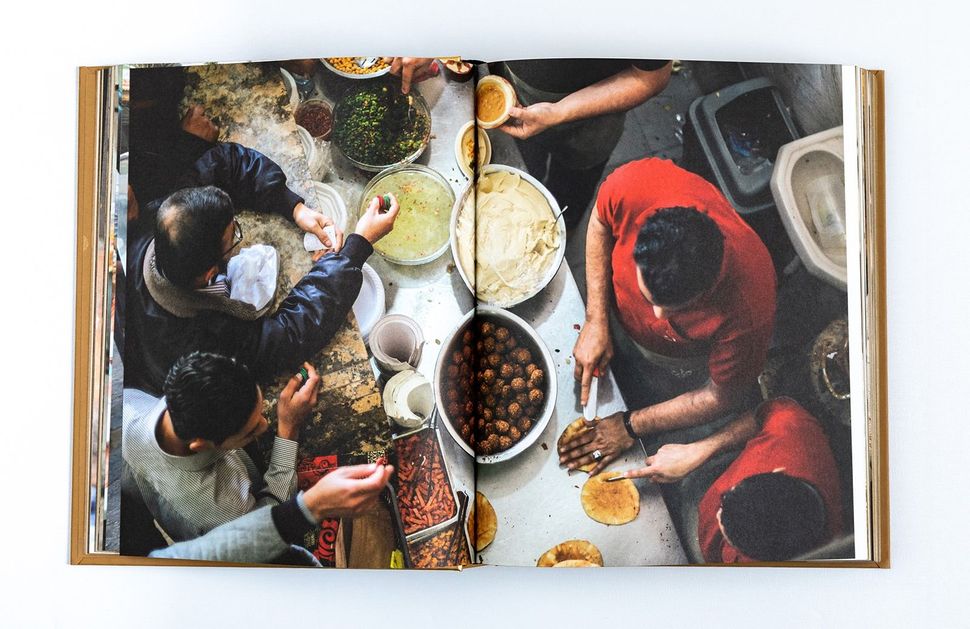 Upon his post-pandemic return to the office 10 days ago, a senior editor at the Washington Post Tweeted this breaking news: “16-month-old pretzels taste pretty much like new ones.” I spent this Wednesday in the Forward newsroom and discovered that hummus has a similar shelf life.

Not actual hummus (ewww).  That should be refrigerated and consumed within a week, according to a quick Google-check (though personally, I think you can stretch it). But preserved perfectly on the coffee table in my office was “On the Hummus Route,” a gorgeous, gargantuan, downright gasp-inducing book that traces the life of the humble chickpea across time and space and posits that, in addition to being delicious, it just might provide the recipe for peace on Earth. I interviewed the book’s  curator, Dan Alexander, at that coffee table on Feb. 20, 2020, and was planning to write about it when the world shut down.

News often disrupts journalistic plans. I was in The New York Times newsroom printing out my extensive notes about whether homeschoolers were unfairly exploiting charter-school legislation in Pennsylvania when the planes hit the World Trade Center on 9/11: I not only never finished that story, I soon left my role as national education correspondent to become Chicago bureau chief.

Back in 1994, when I was at the Los Angeles Times, I had to abandon months of immersive reporting about what was then the fastest-growing synagogue in the country — the Reconstructionist University Synagogue in Irvine, Calif. — when Orange County filed the largest municipal bankruptcy case in history. I spent eight months reporting on the bankruptcy, then was promoted to cover L.A. City Hall, and the story I had headlined in my head, “This is not your father’s Judaism,” never got written.

I did get a little closure on the synagogue story last year when University Synagogue’s then- and still-rabbi, Arnie Rachlis, asked me to be a virtual guest at Shabbat services, introducing me as “the most important journalist in the Jewish world.” You can watch our conversation here (starts around the 30-minute mark).

And now I’m going to write the hummus-book story. 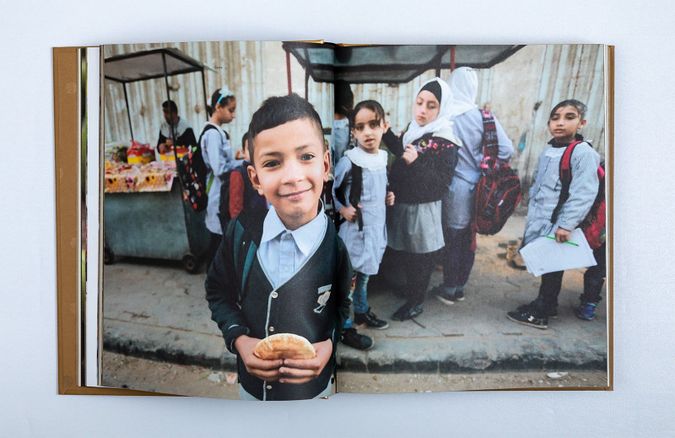 On the Hummus Route, by Dan Alexander, Ariel Rosenthal, and Orly Peli-Bronshtein, celebrates the chickpea.

The book is 408 pages with a shimmery gold binding that simply says “Hummus” in Arabic, English and Hebrew. It opens with a painted map tracing the hummus “route” from Cairo to Beirut and Damascus, through Gaza and Jerusalem and Jaffa, Nazareth, Tel Aviv and Acre, has 30 contributors, and covers some five millennia.

There’s a grocery list from the 3rd century B.C.E., written on papyrus (and preserved at the Met) that includes chickpeas. And there’s a “Thousand-Year-Old Hangover Cure” — a stew of meat, chickpeas, vegetables and a fermented dairy product known as kashk said to alleviate “‘excess heat in the head and stomach’ brought on by copious amounts of alcohol.”

In addition to a two-page spread showing salatim, one of my favorite parts is the simple list, on page 19, of how to say “chickpea” in 16 languages including Amharic (shimbra), Japanese (hiyokomame), Russian (noor) and Swedish (kikärt).

It is a cookbook, in that it has recipes — for Halabassa, Egyptian tomato-chickpea soup; for the Palestinian Msabaha (“swimming chickpeas”); for many items from the Israeli celebrity chef Ariel Rosenthal’s restaurant, HaKosem; for Qedreh Khaliliyeh (“the Hebronite pot”); for Hummus with Squid Ink and Bottarga. It is a coffee-table book, in that it has stunning photographs of food and faces.

And it is something of a manifesto, with poems, personal narratives and section headings like “Hummus without borders,” “The only important question to ask” and “Chickpeas can change the world.”

Alexander is a character. He grew up in a small town near Tel Aviv, attended “a very right-wing yeshiva” (Ohr Etzion, in Israel’s south), served in the Israeli Army, studied at the Bezalel Academy of Art and Design, and has lived for many years in France.

“I don’t identify myself as Israeli,” he told me. “I would like to think of myself as a citizen of the world.”

He also told me he forgot how old he is.

“I’m not into age and I’m not into countries, and that’s part of the book,” Alexander explained. “Usually when people talk about identity it’s just where they were born and who the world forced them to be. I think identity is something you have to choose. And it’s not what you’ve done, it’s what you are going to do.”

The book took three years to make, and Alexander ended up self-publishing it in 2019 after 10 top publishers turned him down — “too heavy, too long, won’t fit the format,” he said they told him. Last year, it was named best overall cookbook and best “peace cookbook” by an outfit called  Gourmand International.

Why hummus? I asked. “I won’t lie to you that I eat hummus every day, because I’m not — it’s not really my thing,” he said. “Through the hummus I can tell the story of humanity. The chickpea is kind of the excuse to talk about other things.” And the journey of recruiting contributors is as important as the book that resulted.

“Someone told me about a Lebanese chef living in Paris,” he said. “I came to his place near to the Champs-Élysées, knocked on the door. I was sitting in a sofa. Then he said, ‘Dan, nice to meet you. The last Israeli I saw was an Israeli soldier. I was 11, I was in Beirut, he forced me to stand against a wall and then he shot in the air to make me afraid. And then you are the second Israeli, sitting here in my living room.’ I said, ‘Look at the window, there is a Mossad sniper looking at you.’

“And then we laughed. Now he is one of my best friends. I am trying to convince him all the time that he is a yeshiva bucher in another life.” 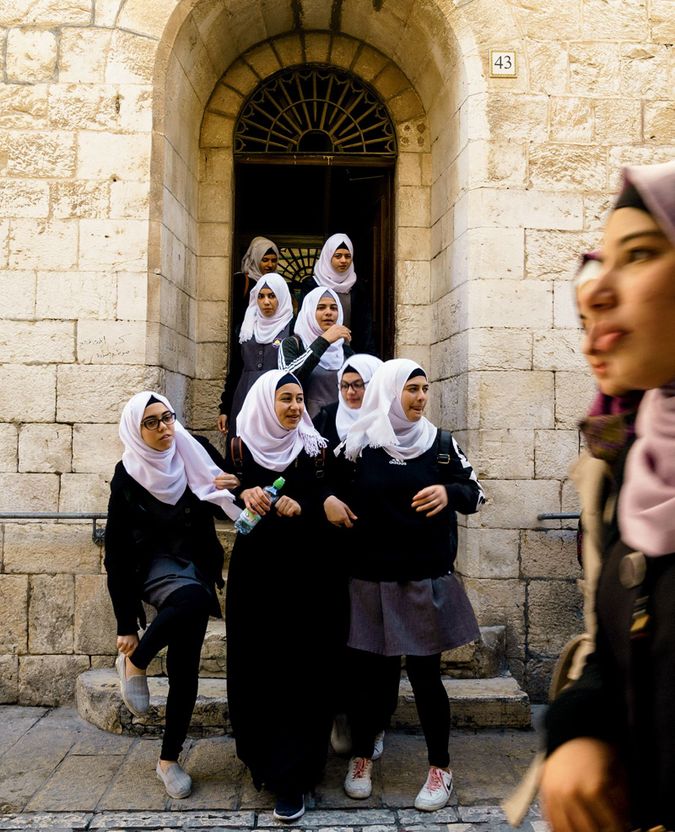 An image from On the Hummus Route, which posits that hummus “can tell the story of humanity.”

My daughter, Shayna, who regular readers of this column know is wise beyond her almost-14 years, was skeptical about the kumbaya message of the hummus book. She loves hummus. And whenever someone posts about it — or any Palestinian or Israeli food — on Instagram or TikTok, she says, the comments devolve into politics, hate and antisemitism. Especially around the May conflagration between Israel and Hamas militants in the Gaza Strip and the attendant internal Israeli violence between Arab and Jewish citizens.

I asked Alexander about the recent war by email — he sort of ducked the question, but said he is now “totally obsessed with sending the book’s message of new social order and equality, knowing that it might be the last call for this kind of message in the Middle East.”

“It’s not like sugar-coating, let’s forget everything and live happily ever after,”  he had told me back before the pandemic when we sat in my office, his gorgeous book on the coffee table. “No, it’s about remembering, it’s about people’s roots.

I’m having vegetarians over for Shabbat dinner tonight. I’ll serve hummus, of course. And I’ll try to change the way I look at it.

Each week, our news director, Benyamin Cohen, compiles some of our best stories for you to savor over Shabbat and Sunday. You can download and print a free PDF of them by clicking here, or browse them via the links below.

What the humble chickpea can teach us about quantum physics