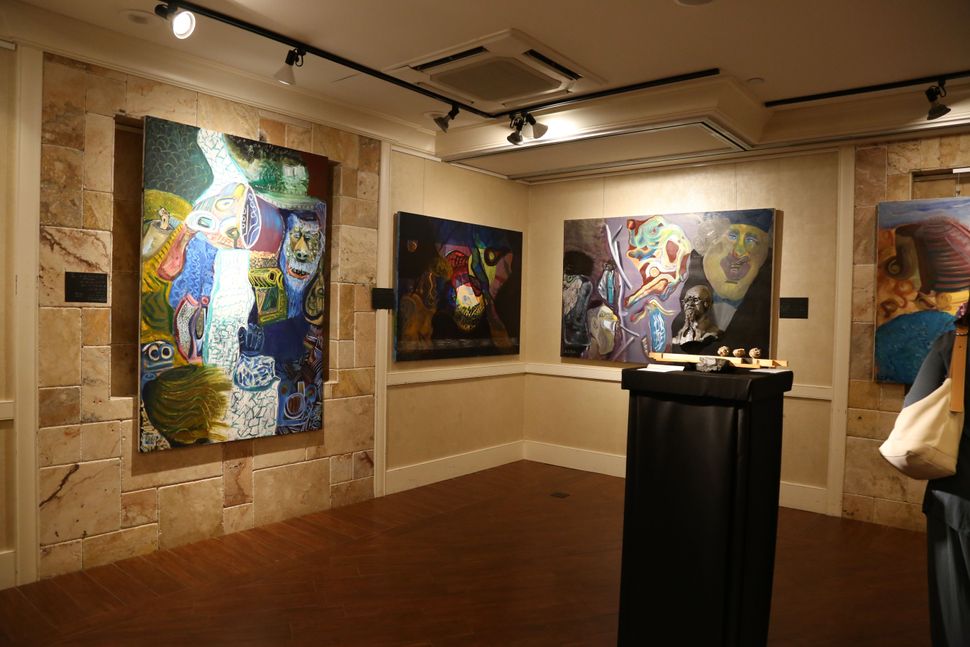 Just off Flushing Avenue, a bustling thoroughfare in Hasidic Williamsburg, there’s a basement full of art.

Housed in a lower-level ballroom in the Condor Hotel, Shtetl is the first art gallery in Williamsburg operated by and for Hasidic Jews. It’s a passion project of Zalmen Glauber, a local sculptor and an evangelist for his neighborhood’s artistic potential.

“There is talent in the community, but people don’t have the platform to share it,” Glauber said. 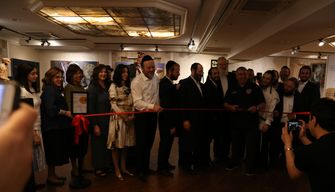 Leah and Zalmen Glauber, fifth and sixth from the left, at Shtetl’s grand opening. Image by Leah Glauber

Long before Glauber’s art appeared at Shtetl, it decorated what his wife, Leah Glauber, called “the best sukkah in Williamsburg.” Each year on Sukkot, Glauber, previously a real estate developer, painted miniature figurines to resemble Biblical characters and arranged them in elaborate tableaux of Torah stories. One year, he had a revelation: Why buy figurines, when he could learn to make them himself?

A few sculpting courses and several years later, Glauber turned to art full-time and started befriending other Hasidic artists in the neighborhood. With Leah, he visited galleries in Manhattan for inspiration, and started wondering why his community lacked a venue to show off its art.

Enlisting Leah as communications director, he started envisioning the art space that would ultimately become Shtetl. The gallery finally celebrated its grand opening, delayed for months due to the coronavirus pandemic, in mid-June.

Shtetl’s inaugural exhibition fuses ancient ritual with modern Jewish life. Portraits of religious leaders share space with surreal dreamscapes and, among more sober work, a watercolor depiction of the April stampede on Israel’s Mount Meron that killed 45 people. Some of the featured artists, like Rosa Katznelson, known for her vivid depictions of holiday rituals, have arrived at Shtetl after long careers. Some, like Lipa Schmelzter, a well-known singer, are already established in other fields. Others, like 22-year-old Hillel Weiser, are just starting out.

But Glauber found the artist he considers to be his standout close to home. His mother, Miriam Lefkovitz, began painting in retirement, and contributed a series of impressionist city scenes that are among the exhibit’s most arresting pieces.

“Art, right now, is where wine was 20 years ago,” Glauber said, pointing to a time when there were one or two kosher brands on the market and few wine stores to sell them. As more wines came on the market, Leah said, advertising and events like wine tastings gave people the knowledge and appetite to become connoisseurs. The couple hopes to accomplish something similar with Shtetl, which has already sold its first pieces and aims to bring in new art three times a year.

“People should be introduced to art, and it will grow on them,” Leah said. “They’ll come and get a feel for it, and hopefully share — and buy.”