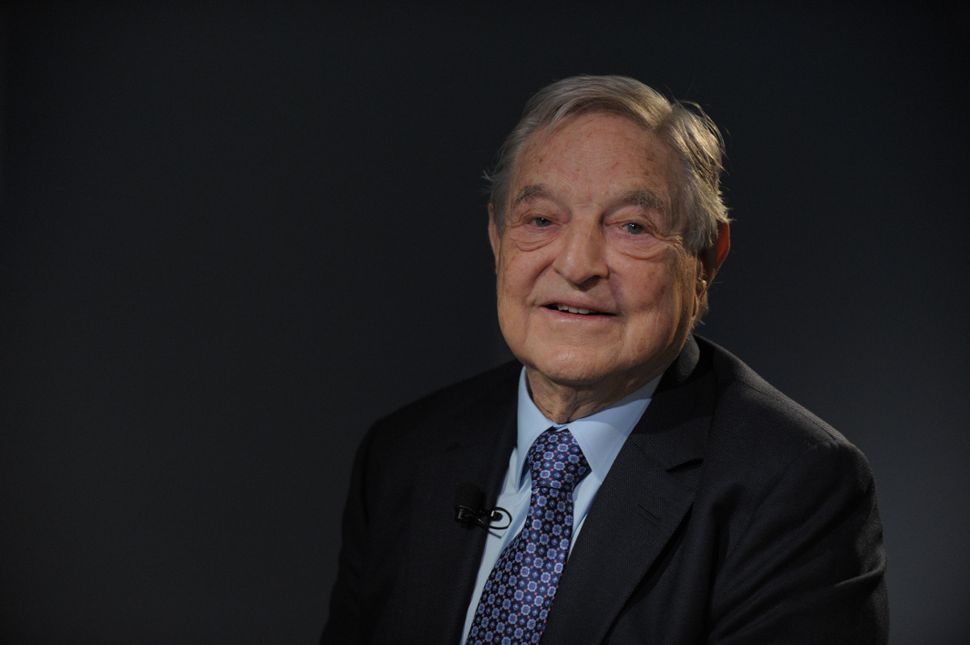 The danger of conspiracy theories is that they can become mainstream thinking in the blink of an eye. That’s what’s happening right now in the governor’s race in Virginia, where Republican nominee Glenn Youngkin is in a tight race with former Democratic governor Terry McAuliffe.

Youngkin has blamed George Soros — the Hungarian-born Jewish billionaire who has become a proxy for “The Jews and Their Limitless Power” — for current debates on how to teach students about the history of racism in America.

“The present chaos in our schools lays squarely at the feet of 40-year politician Terry McAuliffe. It just does,” Youngkin said at an event Tuesday night. “But also at George Soros-backed allies, these allies that are in the left, liberal progressive movement. They’ve inserted political operatives into our school system disguised as school boards.”

What is especially disturbing is how crowds — or should we say mobs — support this kind of rhetoric.

“When Youngkin, who some polls show is tied with McAuliffe, said Soros’s name, some in the crowd of about 700 people hooted and hollered,” The Washington Post reported.

Pay attention to those hoots and hollers.

“Evoking George Soros as a shadowy funder is an anti-Semitic conspiracy theory. This is an unacceptable statement from Glenn Youngkin,” Elaine Luria, a Virginia representative, tweeted.

But let’s take a step back. The idea that Jews are controlling school boards has been percolating in various publications across the country for several years.

Consider this October 2019 commentary piece in The Tennessee Star, with the headline “Yes, Soros Is Influencing Your School Board and Local Government Elections.”

It takes about a minute of digging to realize that the “source” for The Tennessee Star was the Daily Caller, a publication founded in 2010 by Tucker Carlson and Neil Patel.

Luke Rosiak’s piece for the Daily Caller makes these two points right at the top, so it’s not hard to see where Youngkin got his framing from:

“Many cities and counties are adopting radical policies that see every aspect of government operations through the ‘lens’ of race” –and right after that—”A network of George Soros-backed activist groups has worked to push these policies at the most local level of government, where there is little scrutiny.”

Interestingly, The Daily Caller is especially concerned about the word “equity.” It quotes a parent who is concerned that “equity” will result in her children being removed from their schools.

The fear of removal is a line of thinking that seems perilously close to those Charlottesville, Virginia, chants of “Jews will not replace us.

“School board meetings suddenly became like Mad Libs. They started repeating certain phrases, jamming them into every sentence. It was very odd,” Margaret McCreary, a Fairfax County, Virginia, parent told the Daily Caller.

McCreary “eventually learned that the board members were using the ‘equity’ language to push a proposal that could move her children out of their schools,” the Daily Caller claims.

That “all in cahoots” is chilling.

The next step for the Daily Caller was to claim that a Jewish billionaire — the same one invoked by longtime Chicago Tribune columnist John Kass as the man remaking the American justice system — was quietly plotting a takeover of American schools.

“An investigation by the DCNF” — that’s the Daily Caller News Foundation, in case all of this is making you woozy — “found that across the country, these changes are being pushed on local governments by a constellation of groups who share the same funders, including George Soros. One of those groups alone is active in 33 cities and counties covering 1 in 10 Americans,” the Daily Caller claims.

Most of us probably thought we could ignore the Daily Caller, just as we might ignore the rabbi Fox News found to say that opposing George Soros is a mitzvah, in response to the Youngkin comments.

But the violent and irate behavior of parents opposed to mask mandates in schools has to be a wake-up call about the terrifying power of misinformation – and its close cousin, conspiracy theory.

Those “hoots and hollers” reported by The Washington Post at the Youngkin rally are dangerous, and they echo what is happening at the local level, across America, at school board meetings.

A long and thoughtful piece by Amanda Garrett in The Akron Beacon Journal on the brouhaha over school mask mandates tries to parse where we are and how we got here, and it’s interesting to read it alongside Youngkin’s comments in Virginia.

In Ohio, as Garrett shows, the lies have gone straight from the Trump overturn-the-vote campaign to previously non-newsworthy local school board meetings that now require armed protection. And of course, invoking Soros has been part of the mix.

Garrett writes about Tore Maras, a right-wing podcaster who was a secret witness for Sidney Powell’s effort to get the Supreme Court to overturn Donald Trump’s election loss.

Maras recently moved from North Dakota to Ohio and arrived at a school board meeting, speaking last.

“It’s unclear if the crowd of anti-mask parents at Mayfield knew any of this when they applauded Maras as she railed against the Mayfield school board in August, bringing up Black Lives Matter, critical race theory and George Soros,” Garrett wrote.

Google “Soros school boards” and you will find many examples of parents screaming about Soros controlling their local schools. You’ll also find editorials in publications across the country spouting the idea of secret Soros school-board control.

What’s especially concerning about the Akron report is how it connects the dots.

“Parents in Worthington outside Columbus also could have faced disorderly conduct charges after they were more vocal at a school board meeting and appeared to give a Nazi salute,” The Akron Beacon Journal reported.

As you can see, the problem with conspiracy theories and hate speech is where they lead.

Aviya Kushner is The Forward’s language columnist and the author of The Grammar of God (Spiegel & Grau) and Wolf Lamb Bomb (Orison Books). Follow her on Twitter @AviyaKushner