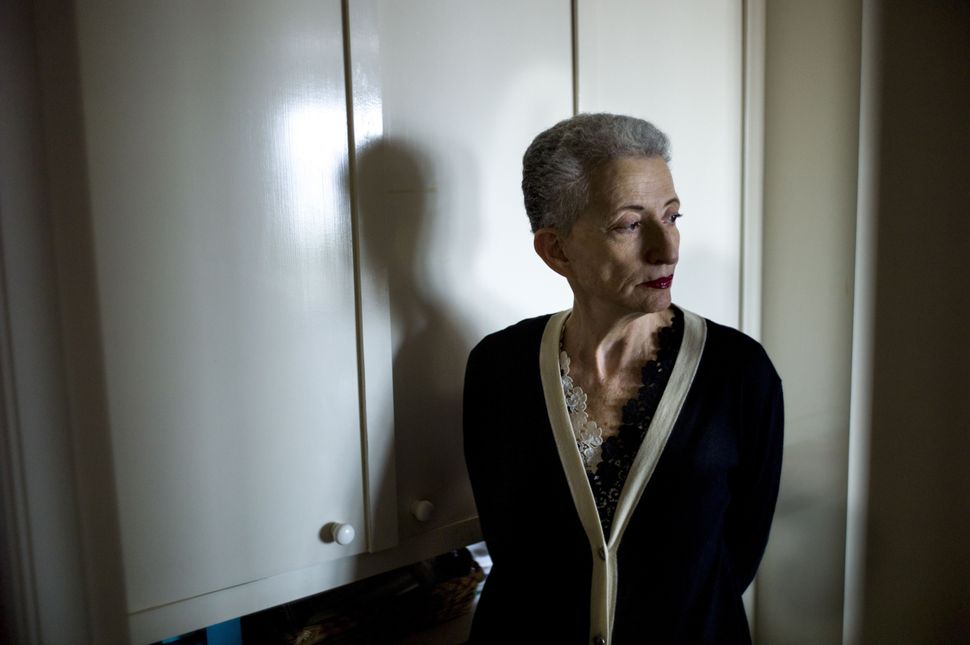 After the deaths of Philip Roth and Amos Oz, two perennial runners-up for the Nobel Prize in Literature, this past year’s short lists for the award included only one Jewish representative, the French author Hélène Cixous. Born in Oran, Algeria in 1937, Cixous has written repeatedly about her upbringing in a German Jewish household, which she considers inexhaustible subject matter.

Often, her literary analyses of fellow Jewish writers, from Clarice Lispector, the Brazilian novelist of Ukrainian Jewish origin, to Paul Celan and Sigmund Freud, contain allusions to her own family experiences.

The Cixous mishpocheh was directly influenced by the Vichy anti-Jewish legislation enacted in Occupied France and its territories in 1940, losing their French citizenship. Her father also lost his job as an army physician because he was Jewish.

Her family was banned from the Edenic garden of a local military club, a rare oasis in Oran, a desertic city. Even after the war, her father had to intervene when Cixous’s school lessons became marred by what she later called “illegal insidious Catholization.” After her father’s early death, her mother supported the family as a midwife, living to the age of 103.

These experiences would instill in Cixous an acute empathy with lives cut short. She expressed such universal themes in books and plays set in Cambodia, India, and other locations. Her longtime theatrical collaborator has been the French Jewish director Ariane Mnouchkine.

Her 1975 book on Pierre Goldman, a French left-wing intellectual who was convicted of armed robbery before being murdered on a Paris street, identified him with the innocent Josef K. in Franz Kafka’s novel “The Trial.” Son of Polish Jewish resistance fighters, Goldman wrote an autobiography, “Obscure Memories of a Polish Jew Born in France” (1975) that created a sensation.

Yet unlike Cixous, Myriam Anissimov, another French Jewish author, agreed with later historians that Goldman was likely guilty as charged, comparing his identity struggles in a novel to a different work by Kafka, “Letter to the Father.”

In contrast to lives cut short, Cixous also celebrated longevity, not only her mother’s, but also friends and literary allies, like Nathalie Sarraute (1900-1999), a French writer of Russian Jewish origin. Of Sarraute, Cixous confessed she was “overwhelmed with wonder that [Sarraute] remained herself, for 99 years before the door of language, trying all the combinations and shibboleths.”

Cixous honored the elderly Sarraute’s literary productivity by referring to the story in Genesis of 99-year-old Abraham’s wife Sarah who, upon receiving the prophecy that she would bear a child at an advanced age, laughed. Cixous’ free associative writing style with plentiful puns and interwoven literary references, notes her own reaction of delighted laughter at Sarraute’s unexpected genius at an advanced age.

No less ardent was Cixous’s tribute to another long-lived hero, her editor Ralph Cohen, who also died at age 99. A mainstay of the University of Virginia English department, Cohen founded the journal “New Literary History,” which frequently published Cixous’s writings. Of Polish Jewish origin, Cohen devised an ever-evolving, self-titled Cohen Haggadah for use at family seders.

Cixous lauded Cohen as an ideally encouraging editor, whose “plenitude of acceptance and assent” expressed the “lucid, patient exercise of a great force of nonaggression, a way of admitting points of view, a benevolence, a charitable disposition in reading…I never felt in him the slightest fold of misogyny, or the slightest intellectual fear. This pure absence of hostility has always been a blessing in my long career, checkered as it is by many demonstrations of adversity and resistances. I call greatness this dimension of infinite politeness in Ralph.”

Likening Cohen’s editorial work to that of an “analyst who is wise enough to enable and encourage those seeking truths in the thickets where the unconscious speaks,” Cixous added: “He does not discourage. He keeps watch.”

Among such supportive relationships essential for Cixous’s achievement, perhaps none was more ardent than her friendship with the French Jewish philosopher Jacques Derrida, also a native of Algeria. The two friends wrote books about each other’s work. Cixous’s “Portrait of Jacques Derrida as a Young Jewish Saint” explored the paradoxes of being born Jewish in Algeria. In turn, Derrida paid tribute to her constancy in friendship and life-affirming qualities by titling a book, “H. C. for Life, That Is to Say.”

Cixous observed that during the difficult years of her youth, historical horrors taught her to accept any struggles for progress as long-term propositions. The fight for women’s rights, preserving democracy, and the ongoing struggle against antisemitism, were all enduring battles, never quite concluded.

She declared Derrida to be a “Proteus unbound.” Cixous referred to her friend’s writings about animals by citing the story from Genesis of Abraham riding a donkey to Mount Moriah to sacrifice his son in the biblical scene known as The Binding of Isaac.

Cixous’s constant references to Jewish tradition are highly personalized and non-canonical, as when in 2005 she confided to an interviewer that the sound of a shofar makes her think of mutilation: “Do you know that the shofar is a ram’s horn which bespeaks deprivation, a horn without a ram, ram without horn; when you hear it wailing at the synagogue, you want to cry.”

During a 2006 conversation, Derrida admitted to feeling “dazzlement and anxiety” when reading Cixous, partly because his friend’s “altercations with the French language” differed from his, and also because of her mixed Ashkenazi and Sephardic roots made her unlike his own entirely Sephardic heritage.

Cixous’s thinking on different subjects is expressed through the prism of her “immense familial mythology,” which Cixous affirms is partly her own invention, according to her mother. Derrida contrasted her books, forthrightly discussing Jewish influences, to his own, in which he claimed to resemble a “marrano, one of those Jews converted by force, in Spain and Portugal, who cultivated their Judaism in secret, at times to the extent of not knowing what it consisted of.”

Cixous responded with typical reverence for Derrida as a writer, claiming that a poem could be compiled merely from the titles of his books. She also added a characteristic family-style jape, that the original French title of her “Portrait de Jacques Derrida en jeune saint juif” could be misheard as “Portrait of Jacques Derrida as a Young Jewish Monkey.” (jeune saint juif/jeune singe juif) With mock ruefulness, Cixous added, “I would have liked for the monkey to have survived, but that didn’t work.”

This element of friendly mockery, lost in translation, lightens some of the typical French-style encomia that otherwise run through the Derrida-Cixous exchange. English language readers are sometimes flummoxed by untranslatable puns and other obscure references. Yet many find Cixous charismatic, like the American Jewish artist Roni Horn, who assembled an entire book consisting solely of portrait photographs of her. Intense fans have organized academic conferences entirely devoted to the interactions between Cixous and Derrida, the first of which was held in Barcelona in 2005.

It would surely be no surprise were Cixous to finally receive a much-deserved Nobel Prize in Literature soon.