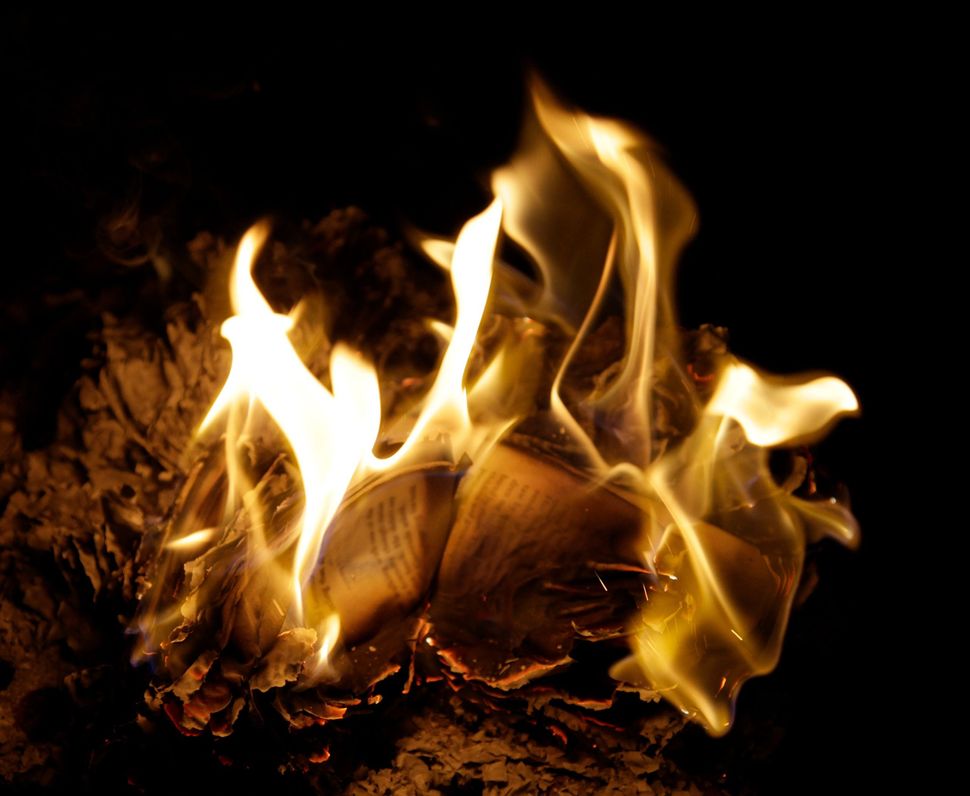 Anyone remotely affiliated with universities should be chilled by the news that a Torah was destroyed at a fraternity house at George Washington University. The image of a replica Torah scroll — ripped apart and doused in laundry detergent, its pages on the floor — is the very latest in a series of increasingly disturbing incidents on American campuses and in college towns that are simply not getting enough attention from the intellectual community.

There is no way to misread an attack on the Torah itself.

When these incidents happen, university administrators issue statements. But the subject of antisemitism on campuses and on college towns is just not part of the discourse at universities. It is generally not part of the Diversity, Equity and Inclusion discussion — despite the sad fact that antisemitic incidents in places where students and professors gather are becoming more frequent and violent.

The Anti-Defamation League found that even with almost all campuses physically closed due to COVID-19, antisemitic incidents on campus were at an all-time high in 2020-21 — with 244 reported. In its survey of 756 self-identified Jewish undergraduate students, the ADL found that a whopping 43 percent had experienced or witnessed antisemitism in the past year.

But that sad statistic doesn’t tell the whole story.

There is also a disturbing uptick activity in college towns — and cities known to host major universities — that is not getting enough attention. Yesterday’s Halloween arson attack on an Austin synagogue, the oldest synagogue in the city, took place just 2.6 miles from the flagship campus of The University of Texas at Austin.

That proximity should not be ignored.

In Iowa City, home to the University of Iowa, swastikas and Nazi messages were spraypainted at City Park, just 1.5 miles from the university’s English and Philosophy Building. Not exactly a college campus, but pretty close — and a clear message to students.

And then there is all the stuff happening close to campus that doesn’t “count” as a hate crime but still feels like one — and is still terrifying.

This time last year — Oct. 30 — a fire was set to a Chabad House in Wilmington, Delaware, months after an August arson attack at the Chabad House at the University of Delaware in Newark caused $200,000 in damage.

What’s happening on campuses and in the supposedly liberal college towns that often host them sadly reminds me of what has been happening for several years now to visibly Jewish people in New York City, where hate crimes — and violent hate crimes — have been surging. When I see a video of a Hasidic man attacked on a Brooklyn street, I invariably think of all those book-jacket biographies that say “so-and-so is a writer living in Brooklyn.”

There are so many writers living in Brooklyn right now that it is a cliché. The same is true for writers at universities. And thinkers. And intellectual leaders.

Many writers and thinkers have declared their commitment to diversity and social justice, yet it is extremely rare to hear a literary writer who is not Jewish say something about rising antisemitism. The truth is that these violent incidents are happening in Brooklyn and in all of New York City with regularity, in neighborhoods where many writers live, work, shop and walk through. The NYPD noted 24 antisemitic incidents in New York City in May alone, and the FBI is investigating.

I worry that college campuses are also becoming places where it is OK for writers and thinkers to look away. For now, there is often quick condemnation — but there is less reflection and even less positive change.

The George Washington University administration — to its credit — was quick to condemn the incident at its fraternity house. “I am appalled by the antisemitic vandalism that occurred at the TKE fraternity house, especially the desecration of the Torah scroll,” GW President Thomas LeBlanc said in a statement. “This is a deeply disturbing incident, and our GW Police Department is working with the D.C. Metropolitan Police Department to find the perpetrators.

“I want to be clear: I condemn all such acts of antisemitism and all forms of hatred, discrimination and bias in our community. Any act of antisemitism is an attack on the entire GW community and cannot, and will not, be tolerated.”

But the bottom line is that these attacks have been tolerated on college campuses, just as they have gone on and on in New York — the epicenter of America’s literary and intellectual community — with barely a whimper.

Jewish leaders say something. University Presidents issue statements. And 32 percent of American Jewish students report that they have personally experienced antisemitism on campus over the past year, and a whopping 43 percent have either been the targets or have observed it happening, according to the ADL.

There is also the belief that whatever is happening to Jewish students, it’s not that bad — which is why this passage from the ADL report should be considered by all affiliated with universities. “Of the 12 percent of students who reported incidents to campus employees, 40 percent felt they were not taken seriously. Unfortunately, knowledge of how to report antisemitic incidents was also low, with 41 percent of all student respondents saying that they did not know how to report an antisemitic incident when it occurs.”

George Washington University has a distinguished record of educating public servants, so this incident is especially dangerous. But you don’t have to be a future politician to know that both destroying Jewish books and setting fire to Jewish culture has a long and bloody history — from the burning of all copies of the Talmud in France in 1242 to Nazi book-burning.

I have no doubt that the Torah’s beauty and majesty will survive — but the question is whether great universities, faced with hatred burning on their campus, will survive with their ethical standing intact.

Aviya Kushner is The Forward’s language columnist and the author of “The Grammar of God” (Spiegel & Grau) and Wolf Lamb Bomb (Orison Books). Follow her on Twitter @Aviya Kushner