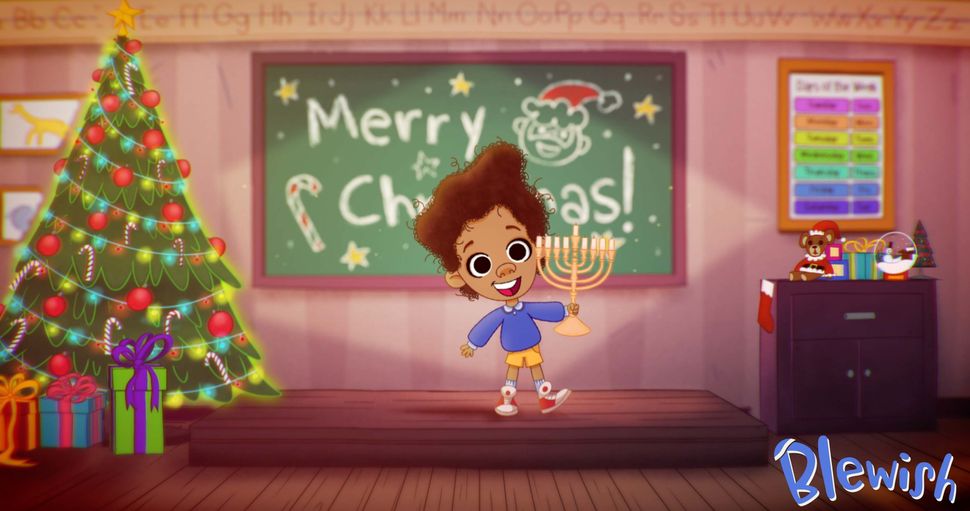 Blewish Class Is in Session: The main character in Ezra Edmond’s film is often made to feel out of place because of his Biracial background and appearance. Courtesy of Blewish

What happens when you mix Black and Jewish identity with animation artistry and the drive to take intersectional representation up a few notches? You get Ezra Edmond’s debut children’s short film, “Blewish,” which is having its world premiere at the Chicago International Children’s Film Festival.

Edmond, who is in his early thirties, is a Los Angeles-born writer, director and producer with a passion for storytelling and insights into complex identities. The dynamics of growing up with an Ashkenazi mother from Los Angeles and a Black father from Alabama fueled his vision for the animated film. 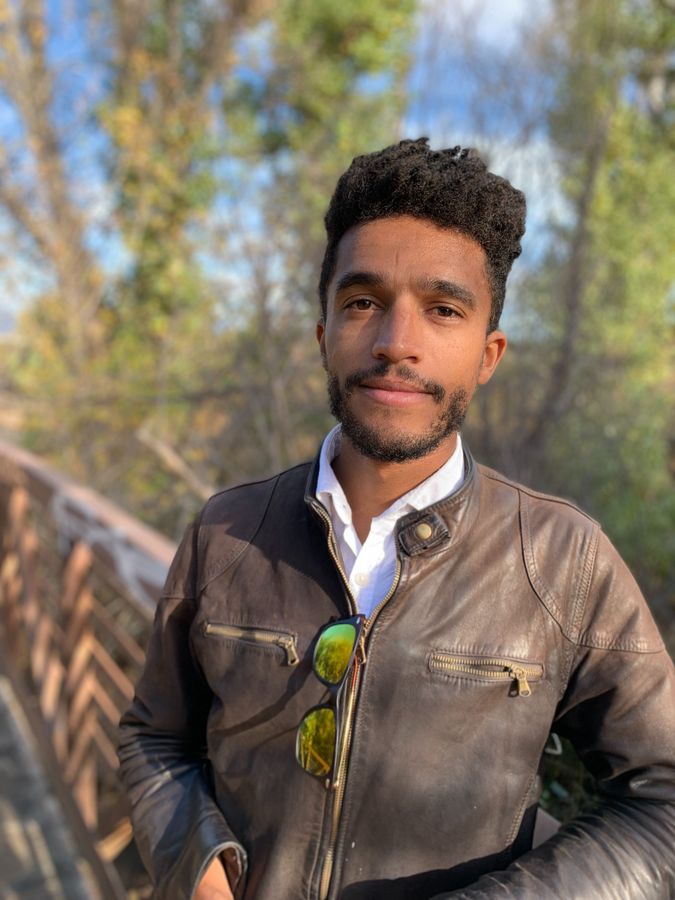 Writer, Director, Producer: Ezra Edmond grew up with a passion for storytelling and insights into complex identities. The dynamics of having a Jewish mother from New York City and a Black father from Alabama fueled his vision for his animated film. Courtesy of Ezra Edmond

“People would often ask me where I was from or what my background was. In Hebrew School, some non-Black Jewish kids wondered what I was doing there,” said Edmond, who said he “grew up conservative” and became a bar mitzvah. “I was trying to figure out myself, where I fit in, feeling comfortable and not highlighting different pieces of my identity.”

Yet he did have hints he wasn’t truly alone. People would point out to him that musician Lenny Kravitz was Black and Jewish, and when he was older, he realized many celebrities share that mix, including Rashida Jones, Daveed Diggs, Tracee Ellis Ross, Drake, Maya Rudolph, Rain Pryor, Eric Andre. This knowledge empowered his sense of identity, leading him to Hollywood himself to create works that highlight greater representation, especially for young Biracial children and their parents.

Edmond studied animation and screenwriting at the University of Southern California, learning to produce so he could turn his visions into entertaining reality. He has developed stories for web and screen, worked with Disney, Pixar, Lucasfilm and other major entities. His credits also include hit television series “Key and Peele,” “The Good Wife” and “Outlander.” 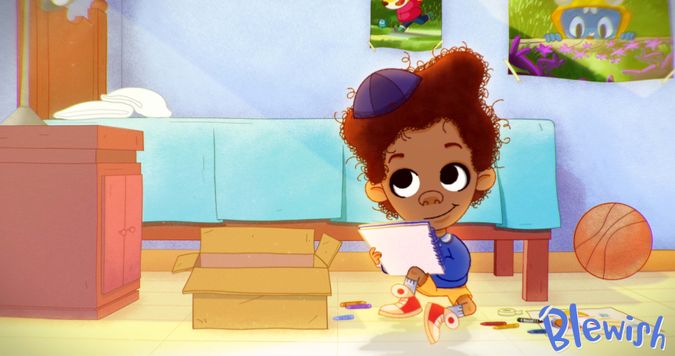 Identity: Ezra Edmonds got the title ‘Blewish’ from combining Black and Jewish, remembering the term from when someone described him that way when he was in high school. Courtesy of Blewish

Today, Edmond is creating content that represents his identity journey and passion for diversifying entertainment through a fresh lens. It all comes together in “Blewish,” the story of a young Ezra, who, like the young Edmond, is often made to feel out of place because of his Biracial background and appearance. Things look up when he meets two other Blewish children with similar experiences.

“I wanted to write something that felt genuine,” he said. “I wanted to tell a story that will resonate. While I used to be really nervous talking about my identity, I thought this is a story I can feel good about.” He titled the film “Blewish” as a way to combine Black and Jewish, remembering the term from when someone described him that way when he was in high school.

“I thought it was witty at the time,” he said. “Thinking about it more, it’s interesting that the word exists at all because if people understood more about identity and intersectionality they wouldn’t see the need to categorize it.”

Edmond’s Biracial background helps him understand and empathize with where other people are coming from, and why they do different things. “A lot of people see so many differences between Black people and Jewish people when they’re not viewing us in an intersectional way,” he said. 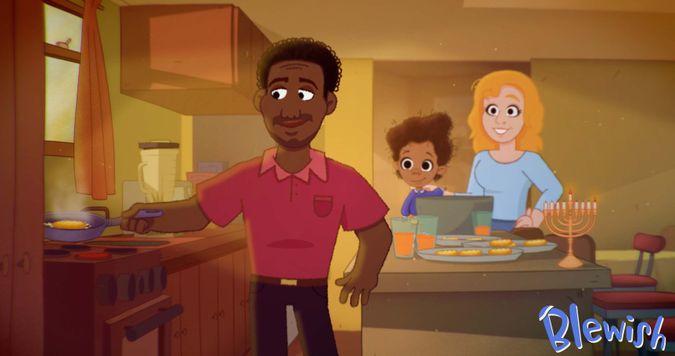 Animator: Ezra Edmond has developed stories for web and screen, worked with Disney, Pixar, Lucasfilm and other major entities. His credits also include hit television series “Key and Peele,” “The Good Wife” and “Outlander.” Courtesy of Blewish

“I’m happy to be telling this story, and having people say, ‘I get it,’” he said. “The whole point of ‘Blewish’ is to make space for kids who watch it, along with parents, schoolteachers, and others to hopefully see the world more through the child’s perspective.”

Next up, Edmond is writing and illustrating a children’s book, “My Friend LeVar,” inspired by his early love of reading and childhood hero, “Reading Rainbow” host LeVar Burton. The book, slated for publication in 2023 by Charlesbridge Publishing, is about a book-loving boy, his imagined adventures alongside Burton, and what happens when they meet in person.

While Edmond hadn’t seen himself creating content for children, an exchange on Twitter asking why there weren’t any books about Burton got his attention. When a publisher replied that they’d love to see such a book, Edmond reached out with his idea, inspired by a photo of when he was a child and met Burton in a Los Angeles pharmacy. “I want kids to learn about LeVar Burton and be excited to learn, just like I want them to learn that being Black and Jewish isn’t just one thing,” he said. 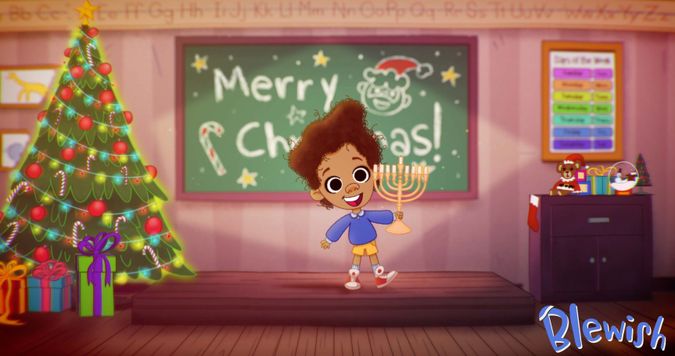 Blewish Class Is in Session: The main character in Ezra Edmond’s film is often made to feel out of place because of his Biracial background and appearance. Courtesy of Blewish

He is excited about the virtual reach of the world premiere of “Blewish” at the Chicago International Children’s Film Festival, as well as in-person appearances he’ll make at the Cucalorus Film Festival in Wilmington, North Carolina where the film will be shown Nov. 15, and in the Tucson Jewish Community Center in Tucson, Arizona, which will include a discussion and communal Hanukkah candle lighting.

TaRessa Stovall is an author and journalist who has long self-identified as Blewish. She writes about the intersections of identity and culture.