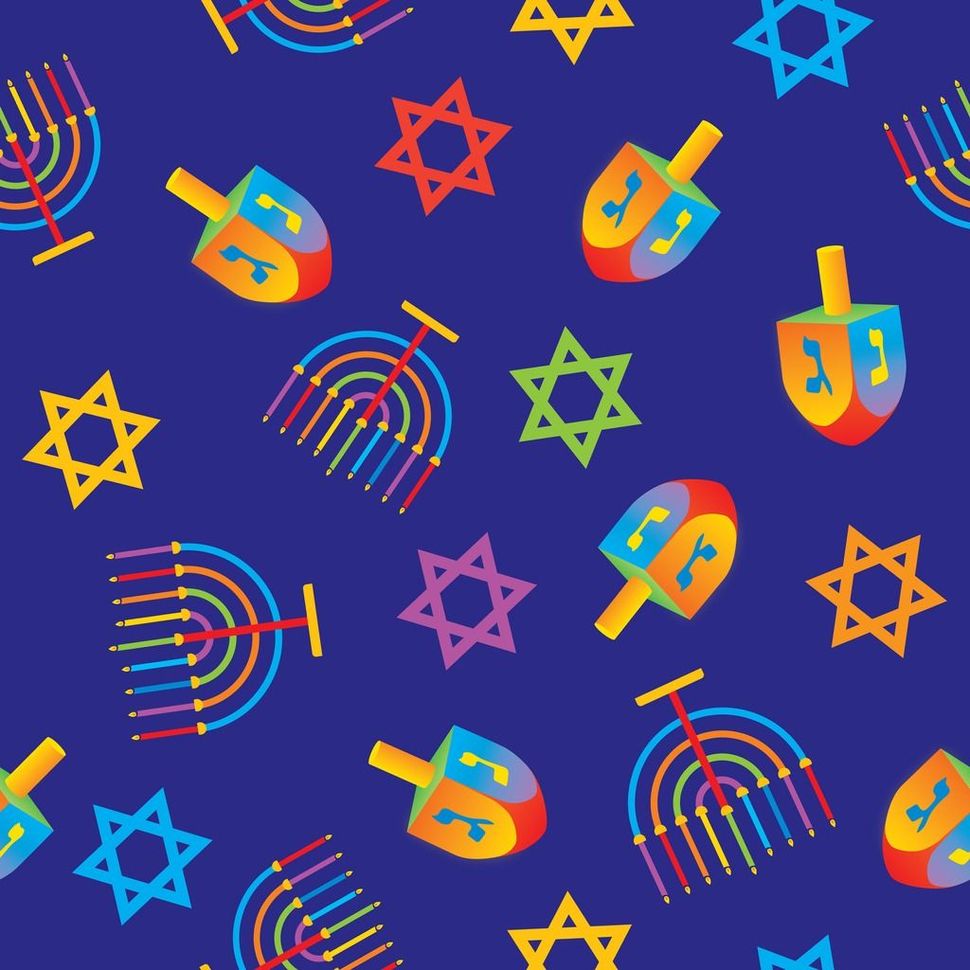 Jewishly speaking, Hanukkah is not a major holiday. Commercially speaking, it is probably the biggest one, falling near Christmas, the true pinnacle of consumerism.

This year, with Hanukkah coming early, starting right at the end of Thanksgiving, it seems to actually be superseding Christmas in the corporate calendar; Hanukkah merch is everywhere and, at least briefly, it has been the star of the show. All that’s done, however, is highlight how atrocious much of the available Hanukkah decor is. First of all, it’s often full of errors: menorahs with too few candles, backwards or upside-down Hebrew, references to matzah — unsurprising to anyone who has seen their local grocery store roll out the matzah display for every Jewish holiday.

Plus, much of it feels hastily assembled, a grab bag of anything a store sells that’s vaguely Jewish. There’s a menorah here and a candle set there, but it’s mostly wine glasses etched with “Oy Vey!” and platters reading “Knish me, I’m Jewish!” along with any item that’s available in blue and white. The most authentically Jewish thing I’ve seen so far on any website’s Hanukkah section is a set of decorative soaps shaped like Mahjong tiles, which is of course actually a Chinese game, but the bubbes do love it.

If there weren’t any Hanukkah options, people would be upset because of the lack of representation. But is any of this really representation? Is Walmart selling menorah-print pajamas really a sign that we’ve found acceptance in mainstream American culture?

Personally, I cringe at the idea of a doormat reading “I love you a latke,” but some people love it; tastes vary. The fundamental issue with this merchandise is that a lot of it is actually for Christmas, just clumsily rebranded to look Jewish, such as a stocking that says “Happy Hanukkah,” Walmart’s “Hanukkah Santa” figurine or a storybook about a “Hanukkah elf” named Shmelf who works for Santa, but takes pity on the poor Jewish kids who Santa skips. Thanks to Shmelf the Elf, Santa now comes for the Jews, I guess. Image by Screenshot from BedBathandBeyond.com

Those are glaring examples, but a huge swath of Hanukkah decor falls into this category. Tinsel wreaths made up in blue and silver are just remakes of a classic Christmas decoration. “Oy to the world” merch references a carol about Jesus. Even the various star-related decorations, while ostensibly non-denominational and vaguely connected to Hanukkah’s theme of light, initially became part of the seasonal canon because of the star that guided the Three Wise Men to the newborn Jesus — there’s a reason a star is the traditional Christmas tree topper. Jesus was a Jew, and so was Santa? Image by Screenshot from Walmart.com

Sometimes, the holiday blending makes sense; for some interfaith families, for example Jewish Christmas tree ornaments may be a lovely way to interweave holidays. But if Christmas traditions are the origin of every item, and never the other way around, it seems less accepting of Judaism than it is watering it down.

Silly rabbit, Hanukkah is for kids!

Dianne Ashton, a professor of religious studies at Rowan University and author of “Hanukkah in America: A History” told me that Hanukkah’s prominence was a reaction and response to Christmas, as rabbis sought to keep Jewish youth engaged and interested — meaning Jews were the ones who originally hitched Hanukkah’s horse to the Christmas cart.

Jewish communities were trying to “keep their children from being envious of their Christian friends — that was the real problem,” said Ashton. “As Christmas became this highly visible, exciting event for Christian children, it became a problem with parents.” 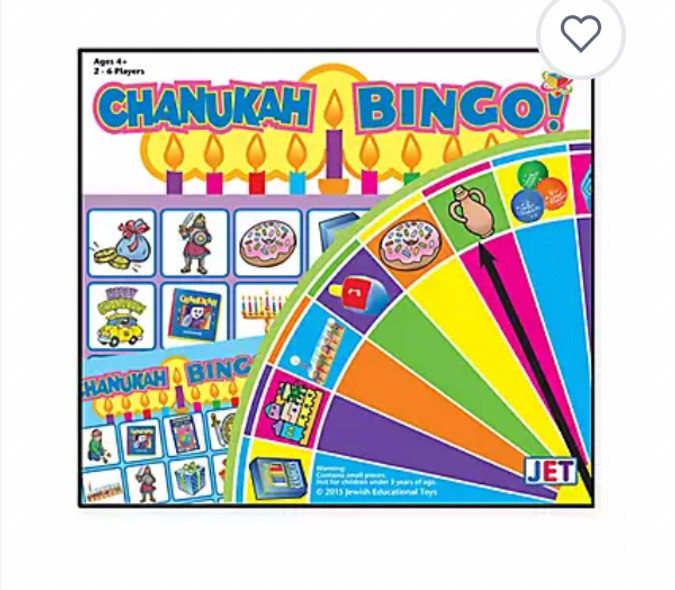 I thought Bingo was for old ladies, but this one says age 4+ Image by Screenshot from Target.com

So rabbis and Jewish organizations began to push Hanukkah observance, consciously creating traditions that could compete with Christmas, including pageants, household decorations and gifts. As a holiday that takes place in the home instead of the synagogue, Hanukkah was easy to mold into a kid-friendly, presents-focused event, becoming more about the fun trappings than about the religious story — how many kids know Hanukkah is about a battle between Jewish zealots and their Hellenized, or assimilated, brethren?

Still, the celebration also served to teach children about and connect them to their own tradition. “Hanukkah has this great story, perfect for kids. You know, there’s good guys and bad guys and destruction, all the things that kids stories are successful with,” said Ashton. “Holidays are really useful pedagogical tools.”

This focus on family involvement is likely part of why so much Hanukkah merchandise feels so childish — it’s for kids. The stuffed dreidels and silly sweaters were part of an effort to create a fun holiday, observed at home, that would appeal to children; in fact, a study from the 1990s that Ashton cited in her book found that adults had little emotional tie to Hanukkah and performed the ritual largely for their kids. Still, even if the holiday is not a spiritual experience for most adults, the choice to observe Hanukkah is significant; Ashton wrote in her book that “Hanukkah is the vehicle through which Jews draw distinctions between themselves and the majority society.”

Is there any good way to do Hanukkah merchandise?

Judging by the ubiquitous Hanukkah merch, the rabbis’ strategy to keep American Jews involved through Hanukkah has succeeded; corporations wouldn’t sell something no one would buy, after all. But the kids who grew up lighting menorahs are adults now, and have often grown out of the kid-oriented aesthetic of menorah-print pajamas and streamers.

As that audience ages, there’s a growing selection of elegant, adult Hanukkah goods. Upscale lifestyle stores like Williams-Sonoma, West Elm and Crate & Barrel pride themselves on class and elegance, so their Hanukkah sections are understated and refined — think a mosaic platter with a subtle Star of David motif or gilded cloches. They’re also much more limited.

This means they’re far less likely to have a mug with a pun on it, but the Hanukkah element is also often less overt, which means it might not feel quite so much like Jews are represented.

Crate & Barrel partnered with lifestyle influencer and blogger Rebekah Lowin to curate a Hanukkah display. (Lowin didn’t design the individual items, but created various arrangements for Hanukkah decor or meals.) There are crystal decanters and minimalist vases and hand-glazed ceramic serving dishes, all of it in varying combinations of ivory and blue with metallic flourishes. A few of the elements are Hanukkah specific — there’s a sleek marble menorah and some night sky-themed plates that mention both Hanukkah and Christmas in the marketing text — but for the rest, Lowin made do with items that the store carries regularly.

Most of the products aren’t distinctly Jewish, so I asked Lowin how she conceptualizes decorating Jewishly. She said that she tries to let the concept of “hiddur mitzvah” guide her, the practice of making the performance of a mitzvah as beautiful as possible. While she said she has nothing against the kitschy mugs or throw pillows, she also wants Jews to have a chance to take themselves seriously and not forever be the punchline to a holiday joke.

“We don’t need to be dumbing down everything to a punny phrase,” Lowin said. “For Christmas, they’ve got 50% sophisticated gorgeousness and like, higher quality, and then 50% is fun, kitschy, silly. And we also deserve that.”

You are what you buy

Today, not all Jews are quite so grateful just to be recognized in the form of merchandise. Christmas-reminiscent gifts, such as a blue and white Hanukkah gingerbread house, have low ratings thanks to annoyed reviews complaining that the item isn’t really Jewish.

“Every year you and other vendors come up with Christmas-lite stuff for Hanukkah,” wrote one person in a one-star review, adding that they wished other, more major holidays such as Passover were recognized. “That’s the holiday where we change all our dishes for a week. That’s when we need stuff.”

(On the other hand, Neal Hoffman, inventor of the “Mensch on the Bench” toy, told the Atlantic that he loses money on the books and products he’s made for other Jewish holidays.)

Meanwhile, Bed Bath and Beyond went viral on Twitter this year for a decorative throw pillow, reading, “Why is this night different from all other nights? Happy Hanukkah” resulting in the store removing the item from their site (The same pillow is now for sale at the craft store Michael’s.) But Bed Bath and Beyond’s Hanukkah section still features numerous Passover items, including a plush matzah baker who sings “Dayenu” when you press him. An Instagram account, @hanukkahfails, even sprung up recently, devoted to tongue-in-cheek critiques of problematic Hanukkah products and more serious demands that corporations do better.

Still, when I asked Ashton if mainstream stores selling Hanukkah goods — even ones with mistakes, or that are actually for Passover — connoted greater Jewish acceptance in American society, she laughed. “Oh my god yes,” she said. “You have to put this in perspective because there was a time not too long ago when you never found anything Jewish anywhere.” Even the grocery store matzah at Hanukkah is worth something.